Budapest Airport traffic up 15% during H1 2018; on course for 15 million passengers this year; data shows it’s time for more long-haul 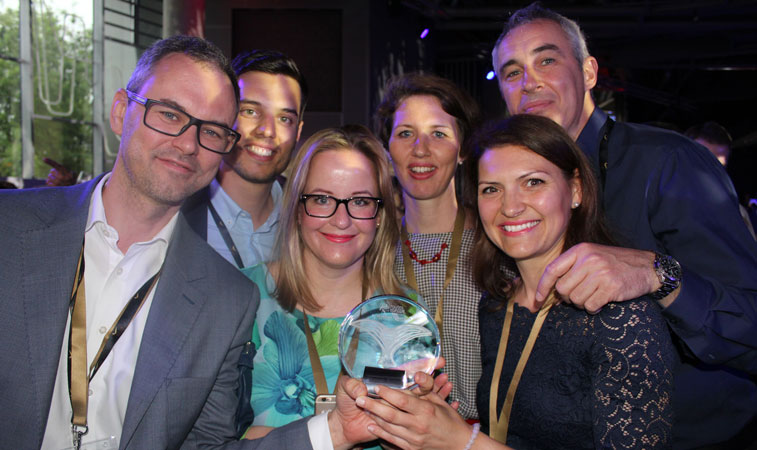 The gateway to the heart of Hungary and indeed a major centre in Eastern Europe, Budapest Airport is an airport on the move, not only in terms of passenger traffic, but also for the fact that on 1 September it will play host to the Budapest Airport-anna.aero Runway Run, taking place at 11:00 on Runway 13R-31L. Besides this mass sporting movement, Budapest has been one of Europe’s big hot-spots during the last few years, with it seeing passenger numbers skyrocket, even with the collapse of flag carrier Malév in 2012.

Budapest has been phenomenally successful over the past few years, with annual traffic growing from 8.52 million in 2013 up to 13.10 last year. This represents an increase in annual passengers across that period of 54%. Last year’s traffic result meant that Budapest was the 42nd largest airport in Europe in terms of passengers processed, sitting just behind Edinburgh (13.42 million), but ahead of Gran Canaria (13.09 million). In terms of Eastern Europe, Budapest is the sixth biggest airport after Moscow’s Sheremetyevo (39.84 million) and Domodedovo (30.66 million), St. Petersburg (16.15 million), Warsaw Chopin (15.75 million) and Prague (15.42 million). 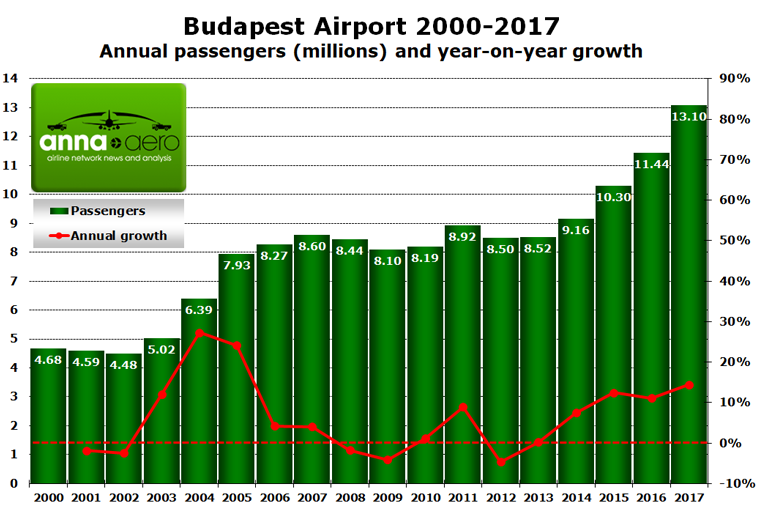 For H1 2018, Budapest recorded a 15% increase in traffic, handling over 6.86 million passengers during the first six months of the year, compared with 5.98 million during H1 2017. If the airport is able to maintain this level of growth for the remainder of 2018, then it should register just over 15.07 million passengers this year. The best month for growth so far this year was March, with over 1.11 million passengers travelling through the airport’s terminal, an 18% increase versus the same month last year.

Having increased its departing seat capacity from Budapest by just under 19% versus S17, Wizz Air has further strengthened its position as the leading airline in the Hungarian capital. However, one airline certainly making strides is LOT Polish Airlines, with the Star Alliance member reporting just under a 108% rise in capacity, a result of the airline adding a route from Krakow, plus basing a 787-8 in Budapest to establish flights to New York JFK and Chicago O’Hare. These are two of three new transatlantic routes for the Hungarian capital in 2018, with the other coming from new airline entrant American Airlines, with it having begun a daily service from Philadelphia in May. 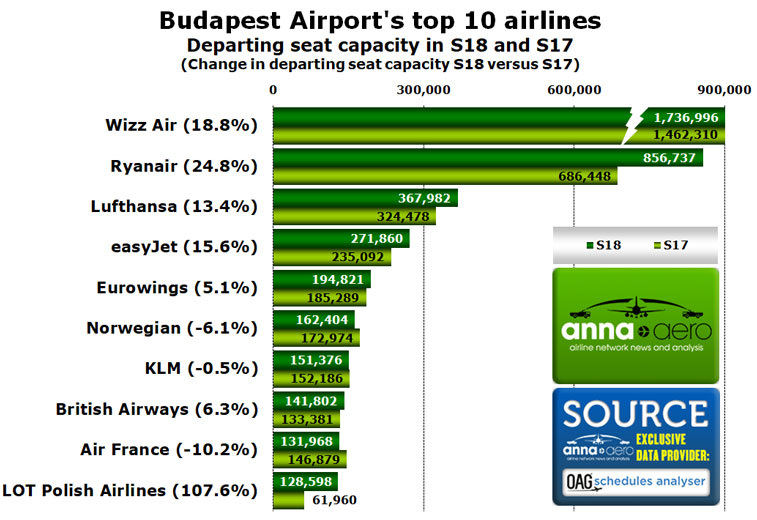 Along with American Airlines, another new entrant to the Budapest market this year is Bluebird Airways, an airline which offers a four times weekly service from Tel Aviv using its 737-300s, with it having begun the city pair on 7 May when referencing Flightradar24.com data. Overall one-way departing seat capacity from Budapest in S18 has increased by 15% versus S17, matching with the 15% increase witnessed in traffic for the first half of the year.

With Wizz Air moving its Budapest flights from Frankfurt Hahn to Frankfurt, it means that latter German hub has overtaken London Luton to become Budapest’s leading route this summer. Overall one-way capacity to the German gateway has increased by 44% this summer as a result of Wizz Air moving its service. In total, Budapest will have scheduled operations to over 130 destinations this summer, with the airport welcoming 13 new destinations since S17. The most high profile of those are the transatlantic services mentioned above, while the following have also been launched since the end of last summer: Krakow with LOT Polish Airlines; Paphos, Marrakech, Santander, Palermo and Valencia with Ryanair; Agadir and Stavanger with Wizz Air; plus Marsa Alam with Travel Service Hungary. The next new destination to be launched before the start of the W18/19 season is Târgu Mureș, a route Wizz Air will launch on 20 September. 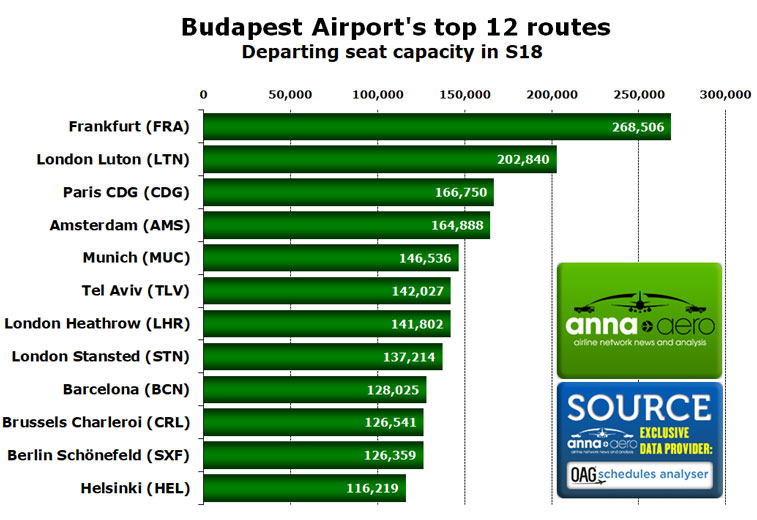 With just under 2.02 million passengers travelling between Budapest and the UK in 2017, the latter is the largest country market from the Hungarian capital city airport, with the market showing continued growth in H1 2018, with 959,378 people flying between the two during the first six months of the year, up 3.9%. This summer there are six airlines flying between Budapest and the UK, with the leading provider of services being Wizz Air, followed by Ryanair. In total some 127 weekly departures from Budapest in S18 are destined for 13 UK airports, while a 14th will be joining the list in 2019 when LOT becomes the seventh carrier to serve the market, launching flights to London City. 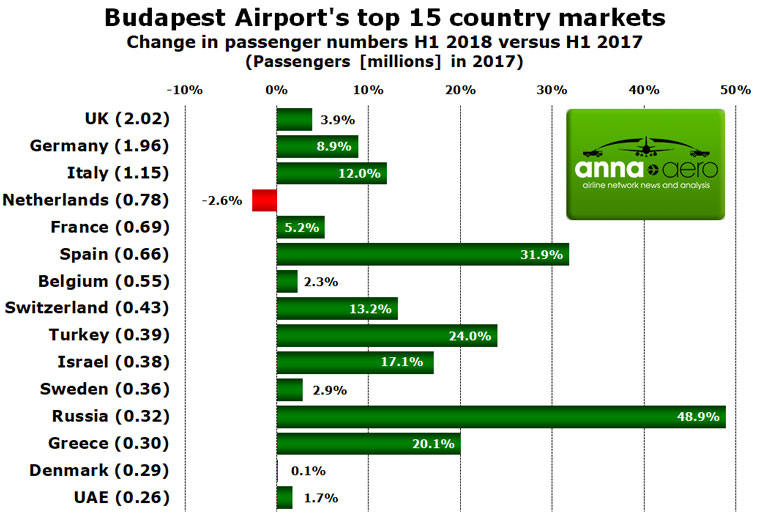 Only one of the top 15 markets is showing a reduction in traffic for the first half of the year, with passenger numbers to the Netherlands down 2.6%. While Amsterdam (traffic up 1.3% in H1 2018 versus H1 2017) and Eindhoven (+4.0%) have both seen a rise in traffic, the drop has been a result of traffic to Rotterdam falling 42% when referencing Budapest Airport data. The decline has been a result of Transavia going from a six times weekly to a four times weekly rotation on the city pair.

An analysis of OAG Traffic Analyser data shows that the leading unserved destination Budapest in 2017 was New York JFK, offering an PDEW of 117 passengers last year. With this route now having been picked up by LOT, along with Chicago O’Hare which was the fifth largest unserved market, it means that the leading market not flown to directly from Budapest this year is Seoul Incheon, with over 46,600 passengers travelling between the two cities in 2017, up 30% from the demand witnessed in 2016. With Korean Air launching flights to Zagreb in Croatia on 1 September, could Budapest be the airline’s next new market in Europe?

Along with Seoul Incheon, other strong long-haul markets currently without a direct service from Budapest include Los Angeles (41,600 passengers in 2017; up 24% from the level of indirect traffic in 2016), Miami (36,200; 25%) and Shanghai Pudong (30,000; 15%). The leading unserved market in Europe is Bremen, with 30,100 indirect passengers last year. It should be noted however that due to the close proximity of Budapest to Vienna, a two-hour 40-minute drive away, a number of passengers in Budapest’s catchment leak to the Austrian airport for direct flights.

Budapest Airport’s route map for S18 is certainly different to S17, with the major development being three US airports joining the network, with American Airlines adding flights from Philadelphia, while LOT Polish Airlines has based a 787-8 in the Hungarian capital to operate flights to Chicago O’Hare and New York JFK.