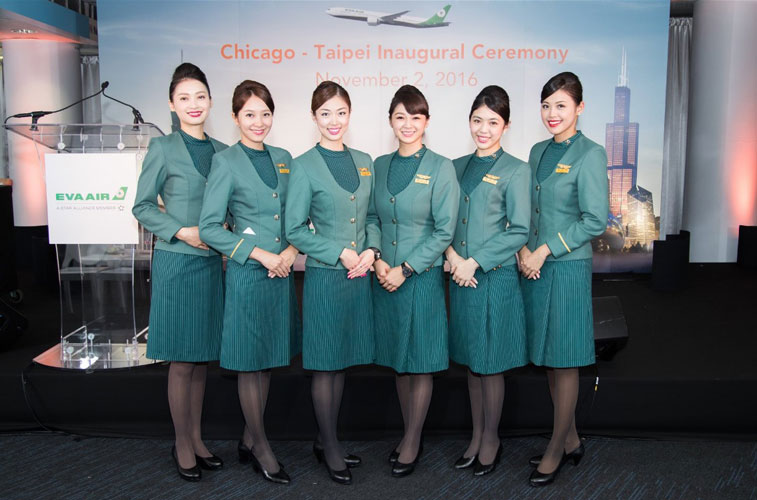 EVA Air welcomed 12.13 million passengers across its network in 2017, a 7.9% increase over the previous year. It is purely focused on international services, and the US is its biggest market outside of Asia Pacific. The airline launched a direct service between Taipei Taoyuan and Chicago O’Hare in November 2016 and will serve six airports in the US this summer.

EVA Air is a Taiwanese full-service carrier that focuses purely on international routes. It was the second largest carrier serving its home market in 2017, with only China Airlines offering more seats. According to ch-aviation, EVA Air’s active passenger-configured fleet currently includes A321s (22 aircraft), A330-200s (three), A330-300s (nine), and 777-300ERs (34). It has a number of 787s on order and also operates a fleet of dedicated freighters. EVA Air owns a subsidiary operator called UNI Air which performs regional and domestic services. It is the largest domestic operator in Taiwan, having taken on its parent airline’s domestic network. Passenger and capacity data for UNI Air is not included in this analysis since the two airlines have independent IATA codes and separate published capacity. 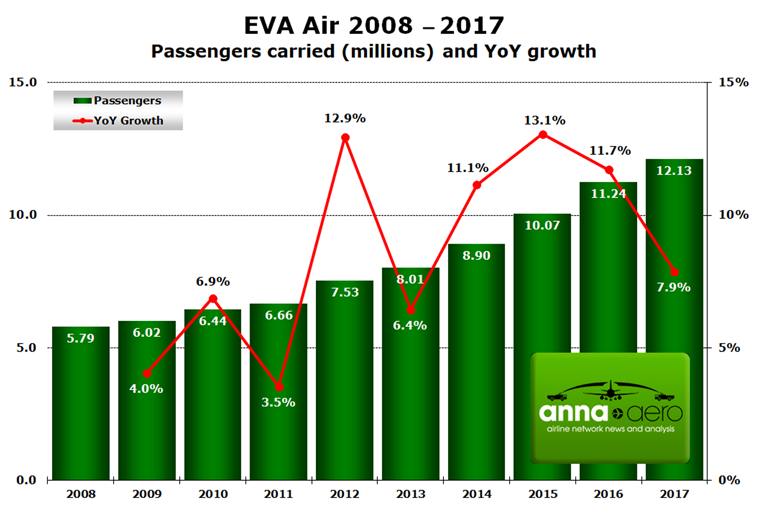 According to OAG schedules, EVA Air hasn’t offered any domestic capacity in Taiwan since 2011, and even then it was minimal in proportion to the airline’s international network. During the period 2008 to 2017, the number of domestic seats on offer on EVA Air services peaked at 136,800 in 2008.

An analysis of the annual passenger load factor (LF) published by EVA Air reveals a relatively stable trend in this important performance metric, with very little variation over the past 10 years. The lowest average LF recorded during this period was 77.4% in 2009, when the global economic recession was at it height. The peak LF was 80.8% in 2015. The variation between the peak and lowest load factors from 2008 to 2017 was subsequently a marginal 3.4 percentage points, indicating that the airline managed its capacity effectively during this time. 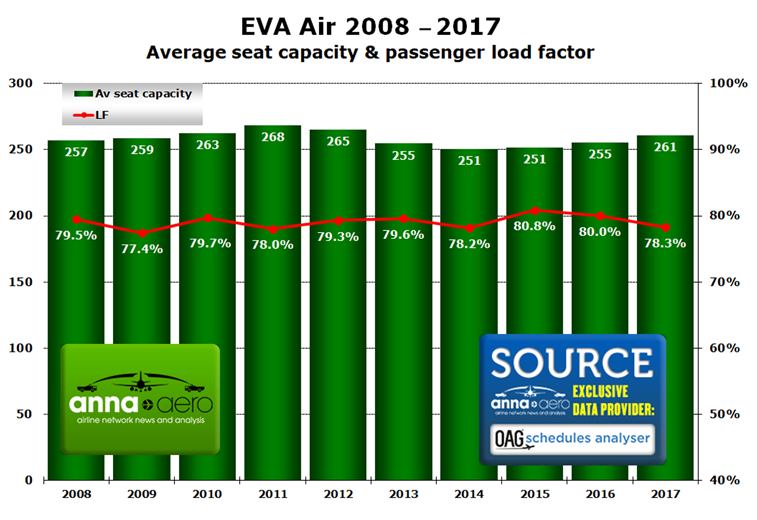 The average capacity on EVA Air flights increased from 257 seats in 2008 to 261 in 2017, although there were numerous peaks and troughs along the way. During this period, the average capacity grew from 148 seats to 184 on the airline’s narrow-body operated services, and from 284 seats to 321 on wide-body flights. The increase in narrow-body capacity was a result of replacing smaller types like the MD-90 with larger A321s. One of the most significant developments in the carrier’s wide-body fleet has been the phasing out of its 747-400s, with these aircraft being replaced by additional A330-300s and 777-300ERs. Wide-body aircraft still operate the majority of EVA Air’s available seats, although the proportion of total capacity they provide has dropped from 89% in 2008 to 80% in 2017.

OAG schedules show that 57 airports will play host to EVA Air services during the week commencing 31 July. Only four of these are in Taiwan: Taipei Taoyuan, Taipei Songshan, Kaohsiung and Taichung. Taoyuan is by far the biggest operating base, accounting for 43% of the airline’s departing seats and offering connections to 47 destinations in peak S18. In contrast EVA Air will only operate nine routes from Kaohsiung, five from Songshan and two from Taichung during the week commencing 31 July.

The highest capacity route in the EVA Air network this summer is its link from Taoyuan to Hong Kong,which will see 60 weekly flights offering nearly 14,000 one-way seats. Daily frequencies on this airport pair vary between eight and nine. In total 10 of the top 12 routes link Taiwan with other destinations in Asia Pacific. The only destinations outside of the region to feature among the top 12 routes are both in the US with San Francisco claiming fourth spot and Los Angeles hot on its heels in fifth place. Japan is the destination country represented most frequently among the top-ranked routes this summer, with two connections to Tokyo and one to Osaka Kansai. The Taipei – Tokyo city pair is represented twice among the top 12 routes, with connections from Taoyuan to Tokyo Narita and from Songshan to Tokyo Haneda. Taoyuan is the departure airport for the carrier’s 11 biggest routes, with Songshan the only other Taiwanese airport managing to break its monopoly, making it into 12th place with its Tokyo connection. 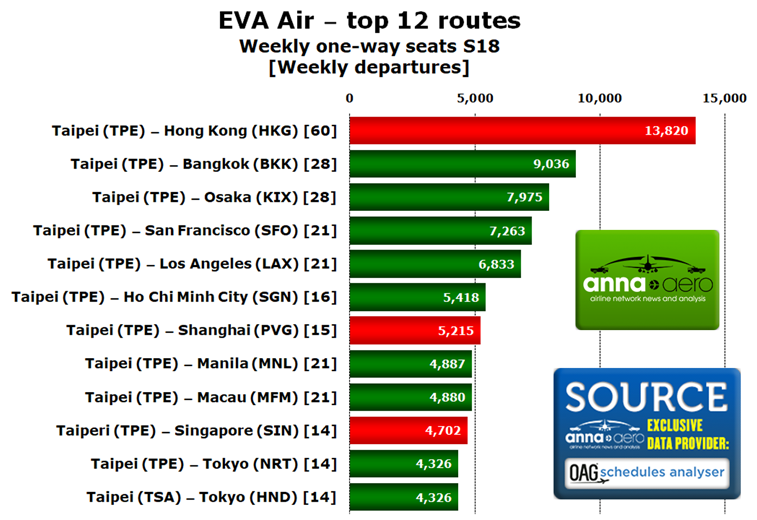 Eight of EVA Air’s top-ranked routes have experienced an increase in weekly capacity in S18 compared to the equivalent period last year. The strongest growth has taken place on the links from Taoyuan to San Francisco (47% increase in seats), Narita (25%) and Kansai (24%). The Californian connection, has seen a third daily service added, increasing the total weekly flights by 50%, while the two Japanese routes have remained at the same frequencies, but have seen a boost in seat numbers due to the use of more wide-body aircraft. Three of the top 12 routes (highlighted in red) have experienced a drop in seat numbers, with the largest decline coming on the Taoyuan – Shanghai Pudong sector, where weekly capacity is down 6.2% compared to peak S17. The airline has cut two routes from Taiwan since S17, with links from Taoyuan to Asahikawa in Japan and Surabaya in Indonesia missing from this summer’s peak schedule, although the former does appear to be returning for a short period between September and October. Four routes have been added since last July, including a long-haul link from Taoyuan to Vienna.

Schedules show that EVA Air will serve 17 countries direct from its home market in during the week commencing 31 July. Japan is the largest destination with more than 30,000 one-way seats on offer to nine Japanese airports. The airline only serves four countries directly outside of the Asia Pacific region: Canada and the US in North America, and Austria and France in Europe. The US is the largest extra-regional destination country in its network in S18. It should be noted that EVA Air also offers indirect itineraries from London Heathrow, Amsterdam and Vienna to Taoyuan via Bangkok Suvarnabhumi. 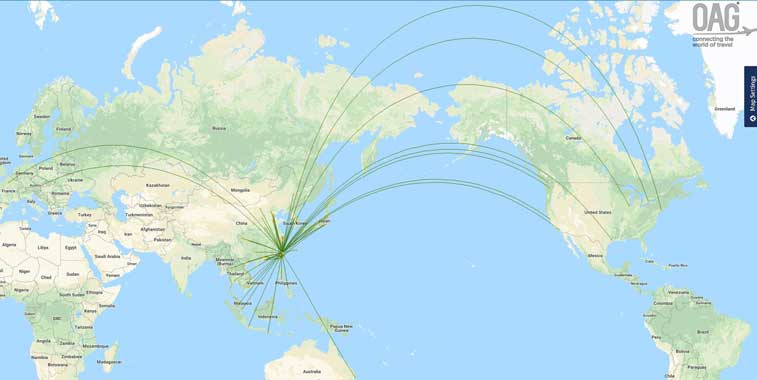 EVA Air’s route map for the week commencing 31 July shows the high concentration of destinations served within the Asia Pacific region. About 79% of the airline’s weekly capacity from Taiwan will serve Asia Pacific routes in peak S18. It also offers direct links to Canada and the US in North America, as well as to Austria and France in Europe. It provides indirect flights to Taiwan from the UK and the Netherlands via Bangkok Suvarnabhumi.