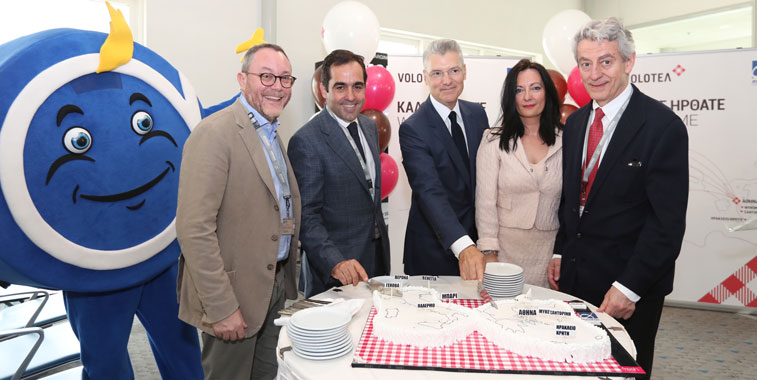 Volotea opened its Athens base, its first in Greece, on 3 May, with the LCC stationing one 717 at the airport. The airline opened new routes from the city including Heraklion and Verona. Among those at the base launch were: Carlos Muñoz, founder and CEO, Volotea (second left), Yiannis Paraschis, CEO, Athens Airport (centre); Ioanna Papadopoulou, Communications and Marketing Director, Athens Airport (second right); and Lázaro Ros, Director General and Co-founder, Volotea (right). Overall the airline has increased capacity in Greece by 102% this summer, allowing it to climb into the nations’s top 12 airlines, overtaking carriers including Germania and Jet2.com in the process.

Greece is one of Europe’s major holiday hotspots, with the nation expecting to greet a record 32 million international visitors this year, almost a 100% increase from the 15 million visitors it welcomed in 2010. While this influx of people may strain the nation’s hotel and tourism infrastructure, it is indeed great news for the economy and the nation’s airports, with the number of passengers using Greek airports increasing rapidly in recent years.

Between 2000 and 2012, the number of passengers travelling through Greek airports fluctuated between 33 million passengers (2002) and 41 million (2007). However since 2012 the number of people being handled has grown impressively, with the nation’s commercial airports processing over 58.5 million customers in 2017, a rise of just under 60% versus the numbers processed in 2012. It should be noted that figures for 2017 are still classed as provisional on Hellenic Civil Aviation Authority’s (HCAA) website, so are still subject to change. 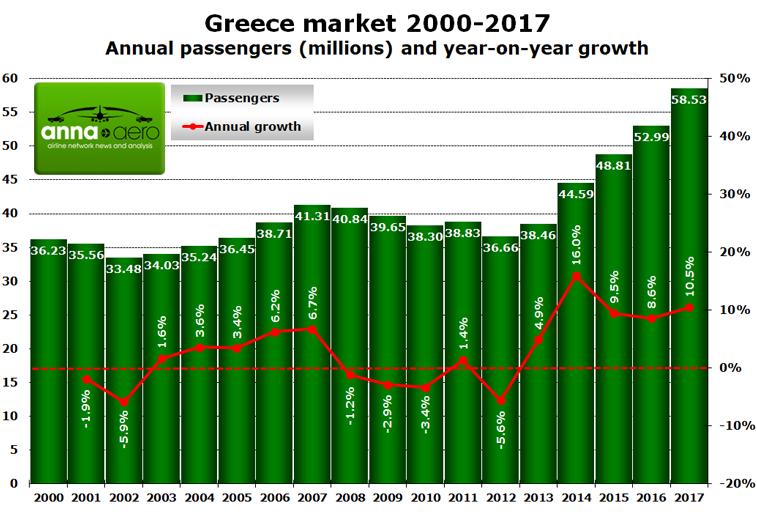 Between 2000 and last year, Greek airports reported drops in passenger numbers in six years, including 2001 and 2002 (post 11 September) and 2008, 2009 and 2010 (financial crash). However, the most substantial growth has occurred in the latter years, with 2014 proving to be the highlight. Passenger numbers grew 16% in that year, allowing traffic to pass the 40 million barrier for the first time since the financial crisis.

For S18, the number of seats being flown to Greece is up by 15%, while passenger numbers for the nation’s leading airports was up 11% for the first five months of the year, with 16.06 million passengers travelling between January and May versus 14.44 million during the same period of 2017. If an 11% growth rate was maintained for all of 2018, the Greek airports could expect to handle just under 65 million passengers for the year, nearly doubling the market size reported in 2002 (33.48 million).

Athens home to most passengers

Given its political and historic significance as Greece’s capital city, it’s no surprise to see that Athens is the nation’s busiest airport, with it handling over 21.7 million passengers in 2017. Following Athens, the top five airports were rounded off by Heraklion (7.48 million passengers in 2017), Thessaloniki (6.25 million), Rhodes (5.30 million) and Chania (3.04 million). Overall these five airports accounted for 75% of all passengers handled at Greek airports last year, down from a market share of just over 77% in 2016 as  the nation’s regional airports continue to expand. 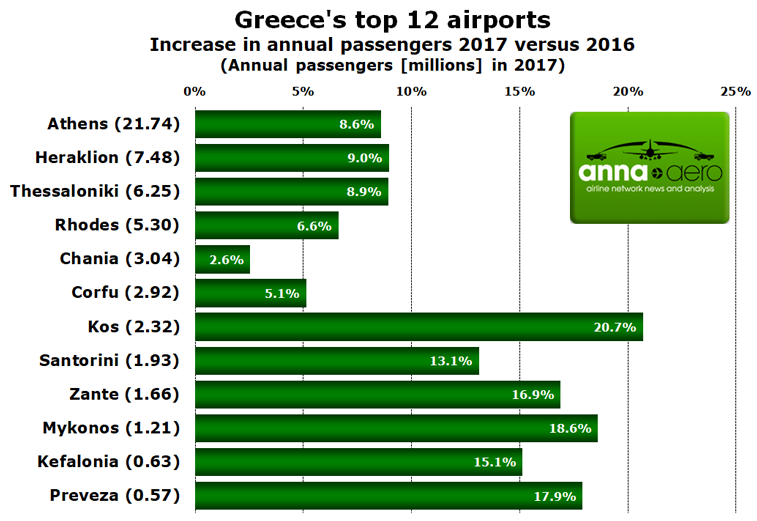 When referencing OAG schedules, there are 39 airports in Greece this summer that have scheduled services, the same number as S17. For S18, departing seat capacity from Greece has grown 15%, with just under 3.79 million extra one-way seats being provided this summer versus S17. The biggest net gain in seats is taking place in Athens, with the capital airport boasting just shy of 1.41 million additional one-way seats this summer, representing a 16% increase in capacity. Following Athens, Heraklion will see just under 600,000 additional departing seats, a 21% rise in capacity, while Thessaloniki is reporting a 13% rise (325,000 more one-way seats) in capacity. Interestingly, one airport in the top 12 which is showing a small drop in departing capacity is Preveza, with the number of one-way seats being flown falling 3.9% from 216,000 to 207,000, with the bulk of this loss coming due to Monarch Airlines’ collapse.

Aegean Airlines, along with its subsidiary Olympic Air, is by far the biggest airline in Greece, with the Star Alliance member offering over 8.10 million one-way seats from Greece this summer based on OAG schedules. The nation’s second biggest airline is Ryanair, but unlike most of its active country markets in Europe, the continent’s biggest LCC is reporting a downward shift in capacity this summer, with it offering just under 2.32 million seats in S18. This is down 4.2% from a capacity of 2.42 million departing seats in S17. The reason for the LCC’s decrease in capacity is due to it cutting a number of services from Chania, including domestic links, while some routes from Corfu and Rhodes are no longer operating this summer. However, the airline has opened a number of new services from Athens in S18, including Billund, Gdansk, Karlsruhe/Baden-Baden, Lappeenranta, Lodz, Memmingen, Rzeszow, Vilnius and Wroclaw. 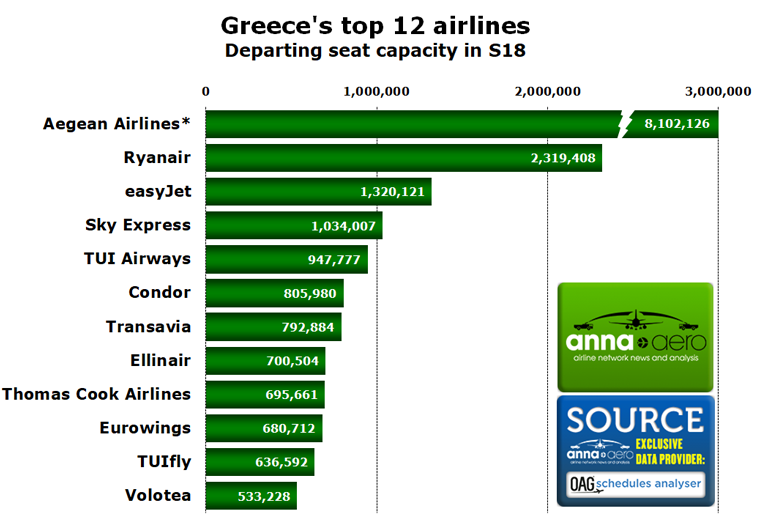 In the top 12, the best airline for growth is Volotea, with the Spanish LCC reporting a 102% increase in departing capacity in S18. The airline has added 16 new routes to its Greek schedules this summer versus S17, including a domestic connection between Athens and Heraklion which began on 26 April, with the Greek capital also becoming a base for the carrier this year. Its strong growth has allowed it to overtake carriers including Germania and Jet2.com to take the 12th position in the airline rankings.

Along with Volotea, another low-cost operator that is making significant inroads in the Greek market is Wizz Air (Greece’s 24th biggest airline in S18), with it increasing its Greek seat capacity by 460% in S18, a result of it adding Athens to its network – the ULCC offers nine routes from the capital. Current data shows that 28% of seats flown from Greece this year are flown by low-cost airlines.

With regards to the top country markets from Greece, it is the domestic sector which is the largest, with it accounting for 27% of departing seat capacity in S18, a market share which has fallen from 29% last summer season. Following on from the domestic sector, the two leading international markets are not surprising, with Germany and the UK accounting for 14% and 12% of capacity respectively, with the fourth biggest market, Italy, sitting on a market share of 5.5%. Given how big the leisure market sizes are from Germany and the UK, along with the domestic market, the trio make up 54% of departing seats in S18, however this is down from a market share of 57% in S17. Interestingly all markets are appearing to show solid growth, with the biggest country market showing a drop in capacity being the 38th biggest – Luxembourg – where seats for S18 are showing to be 0.1% less than S17. 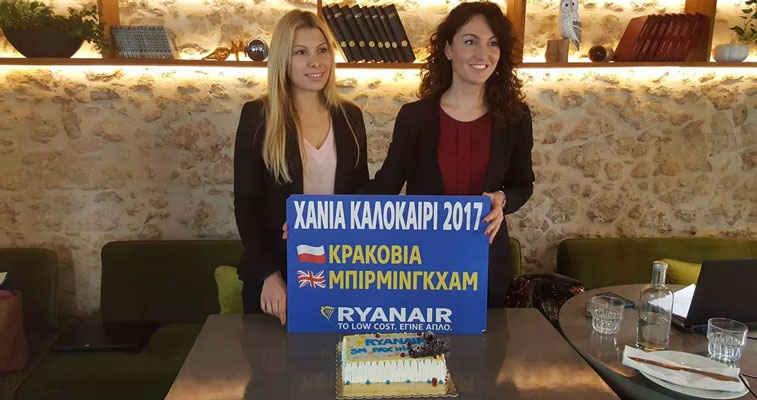 Chania was Ryanair’s first base in Greece, and back in December 2016 the airline announced an expansion from the airport for S17 which included new routes to Krakow and Birmingham. However for S18 the news is not so great for the airline at the airport, with it choosing to reduce its Chania operation and close a number of routes. While Krakow and Birmingham are still operating, the airline’s network from the airport has fallenfrom 30 routes in S17 to 23 in S18, as it no longer flies to Athens, which was flown up to four times daily, Billund, Marseille, Memmingen, Katowice, Stockholm Skavsta, Venice Treviso and Vilnius. As a result of these closures, the carrier is reducing its seat capacity in Greece this summer by 4.2% when compared to the programme it was offering in S17.