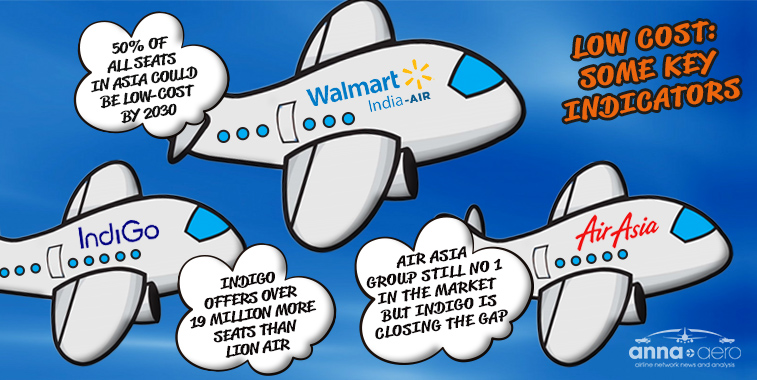 Last week we looked at the low-cost skies of Europe. This week we take a view on Asia. With low-cost capacity in the world’s most populated continent reaching 28% of all seats in 2018, and achieving an average increase in market share of 1.8 percentage points per annum, we forecast that the LCC sector will represent 50% of all seats by 2030.

Last week anna.aero analysed  the development of the low-cost market in Europe. This week we turn to Asia to see how the business model has advanced in the most populated part of the world. Home to around 4.54 billion people, up from roughly 3.73 billion in 2000 according to Worldometers, a forecasting company which uses an algorithm to process data collected from the United Nations Population Division, the continent is certainly fast-paced when it comes to growth. This statement can certainly be applied to its aviation market, with the number of departing seats flown from Asian airports growing by 111% between 2008 and 2018, with a forecast of 1.90 billion departing seats being flown in 2018. Of these seats, 28% will be flown by a low-cost operator.

Asia’s low-cost seat capacity has expanded at a double-digit rate since 2008, with an average year-on-year growth rate of 19% being recorded during this time. To give a little bit of context, the European low-cost market has grown at an average year-on-year rate of 9.4% during the same period. So vast is the growth in Asia, that in 2017 the market overtook Europe in terms of LCC seats being flown, with Europe offering over 467 million seats in 2017 versus 478 million in Asia. In 2016, 13.28 million more departing LCC seats were flown in Europe than in Asia. 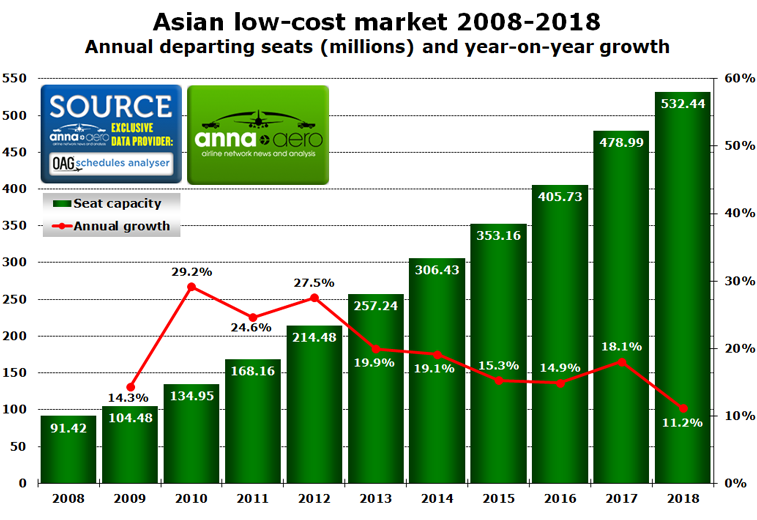 While low-cost seat capacity from Asia advanced by just under 53.45 million seats this year, the rate of growth has slowed down versus 2017, when seat capacity grew by 18% (73.26 million extra seats). In fact, the rate of growth forecast for 2018 is the slowest on record in the period analysed, with the best years for advancement being 2010 and 2012 respectively, with both of these years seeing growth of over 25%.

Based on the average annual growth rate of 19% recorded over the past decade, low-cost seat capacity could reach 630 million in 2019. However, with the steady decline in capacity growth, at an average drop rate of 2.3 percentage points since 2010, the number of low-cost seats that will be flown in 2019 is more likely to be around the 580 million seat mark.  This is based on a forecast growth rate predicted by anna.aero, which has placed the expected growth rate for next year at 8.9%. 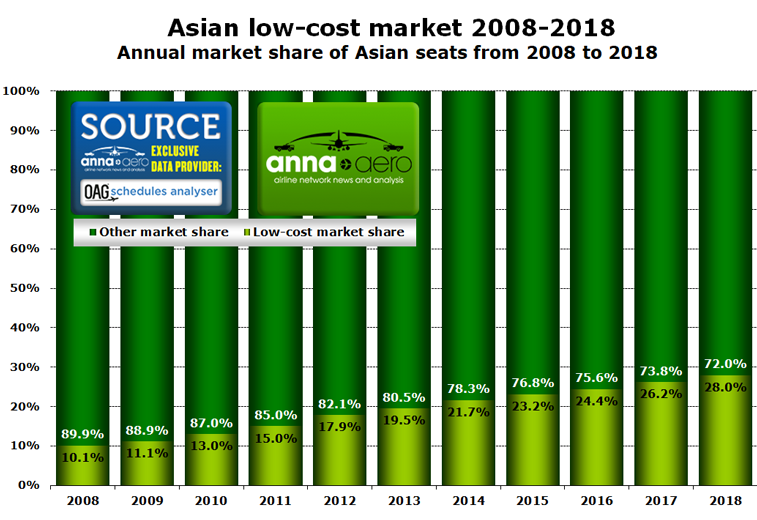 When looking at just the intra-Asian market, the story is a little bit different. Taking this into account, LCC market share grows from 28% for all seats, to just shy of 30% for the intra-Asian market, with this going from a 29% share last year. Presently IndiGo is Asia’s fourth largest airline, sitting behind the Chinese giants of China Southern Airlines, China Eastern Airlines and Air China. Lion Air, the second biggest LCC in Asia, sits sixth behind All Nippon Airways.

IndiGo advances lead at the top but still behind AirAsia Group

IndiGo is Asia’s biggest LCC, with the carrier offering over 71.4 million seats in 2018, up by nearly 22% versus its offering last year. While Lion Air has only reported a 1.8% rise in capacity this year, choosing to add its extra capacity to its Thai Lion Air unit (up 26% in 2018), it has allowed IndiGo to open its lead at the top to 19.58 million seats, increasing from a gap between the two carriers of 7.70 million last year.

While as a separate unit IndiGo is by far the largest low-cost operator in Asia, when we combine the collective carriers of the AirAsia Group together, they record an annual capacity for 2018 of 97.28 million seats, up by just under 19% versus their combined offering in 2017. The result for 2018 for the AirAsia Group means its operation in terms of capacity is 36% greater than IndiGo’s, however this has fallen from a 40% difference between the two carriers in 2017, further highlighting the latter’s growth. 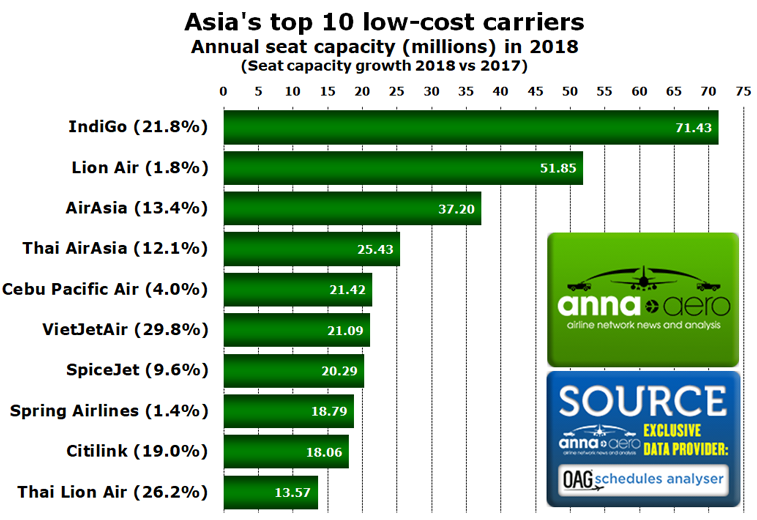 This year, when using OAG classifications, 68 low-cost airlines will be operating to/from and within the Asian market. This is up from 66 in 2017, with the two new entrants for 2018 being South Korean low-cost start-up Air Pohang, an airline which uses two CRJ 200s on domestic routes from Pohang to Jeju and Seoul Gimpo, and WOW air, which will begin flights to Delhi this coming winter from Reykjavik/Keflavik.

When it comes to low-cost seats, India is by far Asia’s biggest country market for the business model, with the nation home to just under 23% of the region’s departing LCC seats in 2018. To put this in perspective, just over one-in-five low-cost seats departing from Asia this year will take-off from an Indian airport. While anna.aero has forecast that the LCC market share in Asia will reach 50% by 2030, five nations have already reached this barrier in 2018. These are India, the Philippines, Malaysia, Thailand and Indonesia. 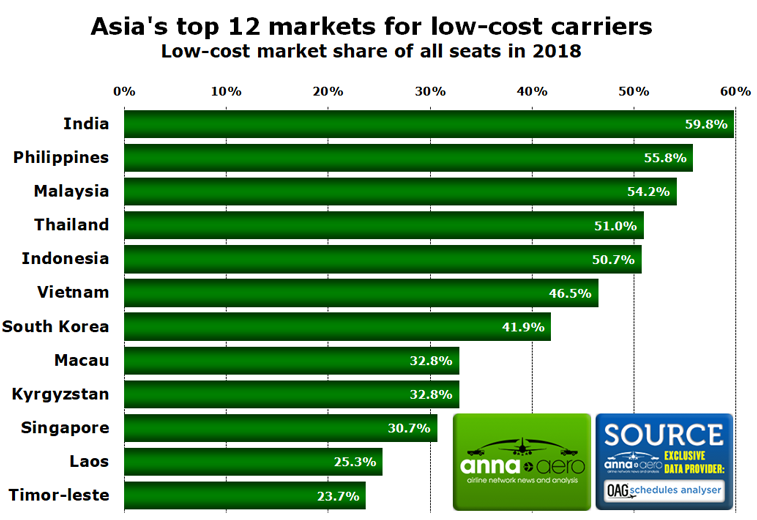 Three nations with no low-cost presence

In 2018 there are three Asian nations still awaiting low-cost service – Cocos Islands, North Korea and Bhutan. After these three, the nation recording the smallest penetration by LCCs is Uzbekistan, with the business model having just a 0.1% market share of seats. The only low-cost operator in Uzbekistan in 2018 is Air Manas which offers a twice-weekly (Wednesdays and Saturdays) service from Bishkek in Kyrgyzstan, Asia’s ninth biggest market in terms of LCC market penetration (33% of seats), to Tashkent. It should be noted that while Russia is in the chart below, that is due to the easterly part of the nation which resides in Asia, with the European part of the country seeing LCCs having a a 6.7% share of the market. 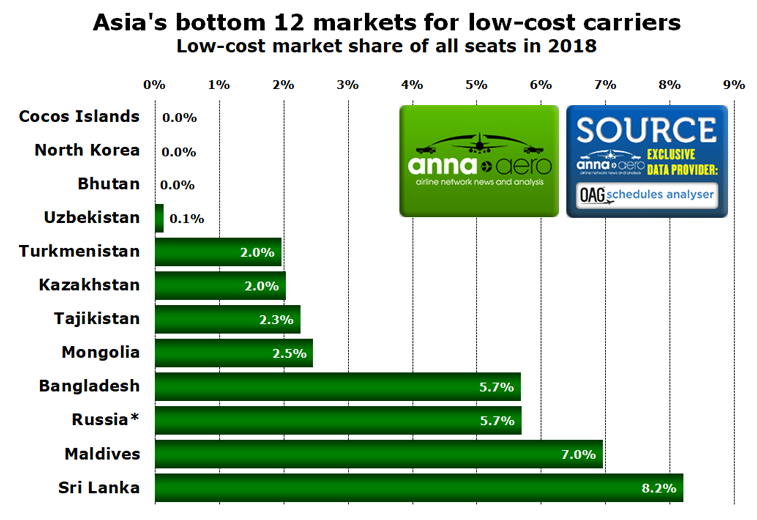 It should be noted is that two of the nations which fall into the bottom 12 country rankings for low-cost penetration – Bangladesh and Sri Lanka – sit very close to the power house of India. With data from World Bank showing that Bangladesh’s GDP expanded by 7.3% in 2017 and Sri Lanka’s by 3.1%, it is possible LCCs could start to see the potential of these emerging markets in the coming years. However, with India reporting a 6.6% rise in GDP last year, and having a population of over one billion people, it is likely to continue taking the attention of the region’s and the world’s low-cost operators as they look for new route possibilities. 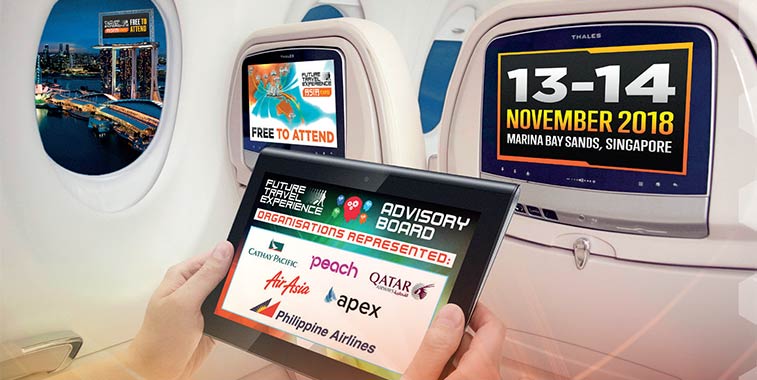 anna.aero’s sister unit, Future Travel Experience (FTE), will once again be heading to Singapore between 13-14 November 2018 for the free-to-attend FTE Asia EXPO. The company’s advisory board for the EXPO includes members from two of Asia’s biggest LCCs, including Jose Oller, EVP Operations, Peach Aviation, and Kenneth Anderson, Head of Innovation & Product Transformation, AirAsia. Hear from these airline executives and others at this year’s event.