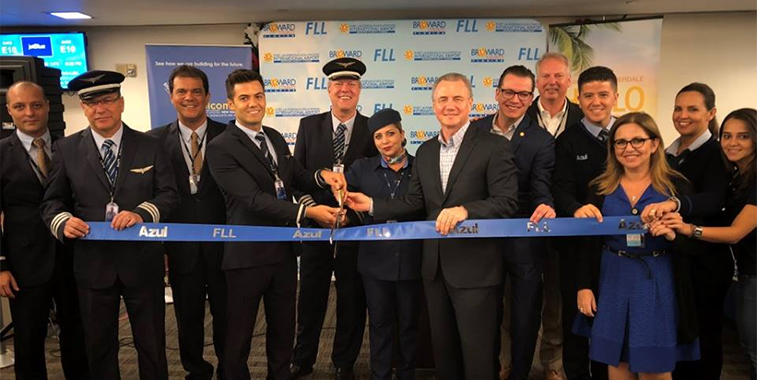 International seat numbers saw stronger percentage growth than domestic services at Brazil’s airports from 2012 to 2017, increasing by 10% over this period. Azul Airlines added to the increase in international links when it introduced a new service from Belem to Fort Lauderdale last December.

Domestic ASKs up by two-thirds since 2008

Domestic services provided the strongest percentage growth in ASKs in the Brazilian market from 2008 to 2017, increasing by 67% from 66.75 billion to 111.78 billion over this period, and subsequently outpacing the total market growth rate by 13 percentage points. From 2008 to 2011, there were three consecutive double-digit increases in annual domestic ASKs, including a 32% boost in 2010. 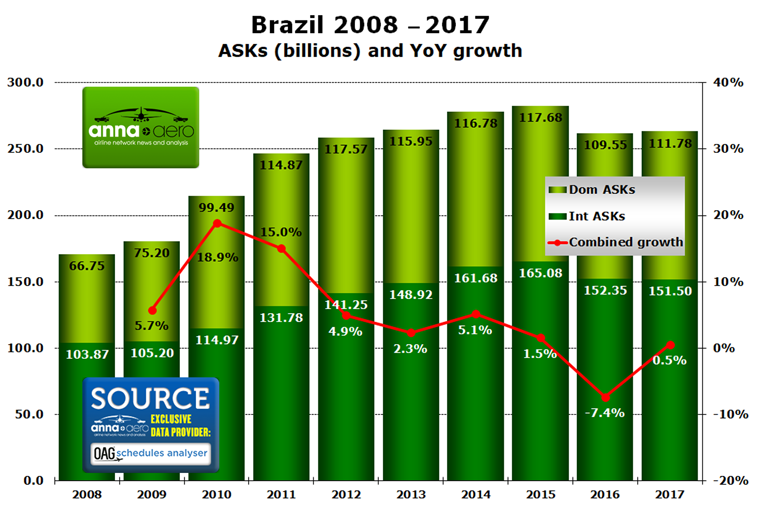 The two-way seats available between Brazil and international destinations grew from 17.99 million in 2008 to 26.62 million in 2017. This represented a 48% increase in international capacity. From 2012 to 2017, when the overall market in Brazil was either declining or stagnating from year to year, international seat numbers increased by 10%. 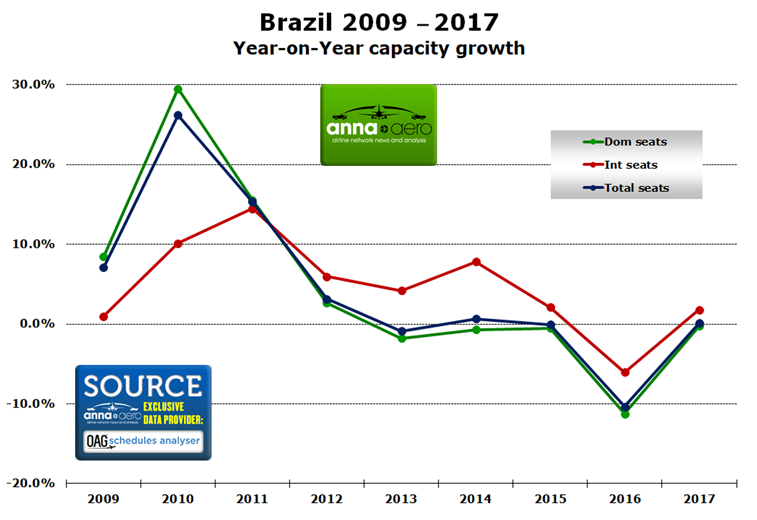 In contrast, domestic seat numbers increased from 80.92 million in 2008 to 115.68 million in 2017, representing a growth rate of 43%. Domestic seat capacity rose as high as 134.69 million seats in 2012 before five consecutive years of cuts saw it decline by 14% from 2012 to 2017. Despite being outgrown by international seats over the past five years, domestic capacity still reigns supreme in Brazil. It accounted for 82% of all seats serving the country in 2008, and still held an 81% market share last year. The above graph demonstrates how Brazil’s overall market performance is subsequently closely linked to the fortunes of its domestic segment.

According to OAG data, 112 airports in Brazil welcomed at least one scheduled service in 2017, although some of these will have been limited and irregular. Only four airports offered 10 million departing seats or more in 2017: Sao Paulo Guarulhos, Sao Paulo Congonhas, Brasilia and Rio de Janiero Galaeo. These four airports have topped the charts for departing seats in their home market over the past 10 years. Their combined capacity accounted for 47% of all departing seats in Brazil in 2008 and 44% of the total last year. Guarulhos and Congonhas maintained their positions as the largest and second-largest airports across the period 2008 to 2017. Brasilia and Galaeo battled it out for third and fourth place, swapping ranking positions a number of times over the past 10 years, with the latter offering more seats in 2008 but the former holding on to third spot since 2013. Guarulhos enjoyed the largest growth in capacity among the big four from 2008 to 2017, with its departing seat numbers growing by 62% over the period. Galaeo saw the smallest increase, with its capacity growing by 7.5%. 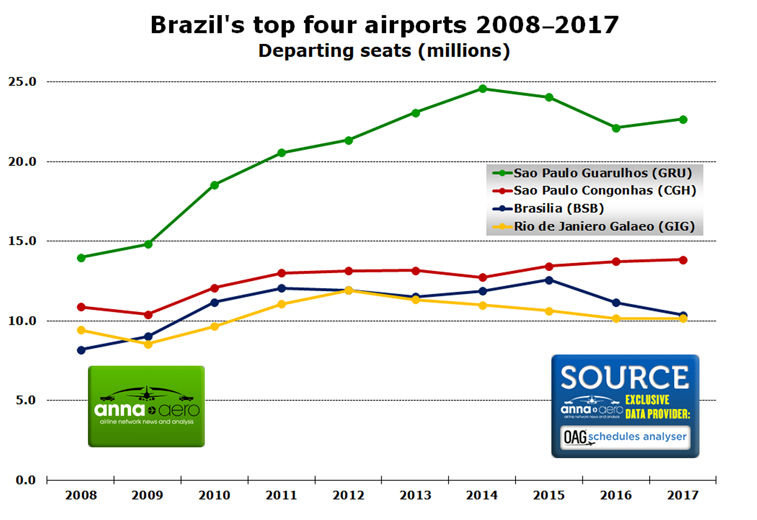 Outside of the top four, a further 45 Brazilian airports offered 100,000 departing seats or more in 2008. Many of these airports witnessed strong capacity growth from 2008 to 2017, with nine facilities more than doubling their available seats over this period. The strongest percentage growth among the 45 came at Navegantes, where departing capacity increased by 265% from 274,000 seats to one million. Meanwhile, the largest net increase in capacity over the period came at Rio de Janeiro Santos Dumont, where seat numbers increased by 3.02 million to 6.38 million last year. This made it the fifth largest airport in the country based on the capacity metric, just ahead of Belo Horizonte in 2017.

Brazil was linked to 36 international markets in 2017. Although several of these did not support regular flights, 22 were served by 100,000 seats or more last year. Of these 22 countries, 13 experienced a year-on-year increase in capacity from Brazil from 2016 to 2017, and the top 12 for growth are listed in the table below. These include six countries in Latin America, two in Europe, two in North America, one in the Middle East and one in Africa. Colombia (29% up) and Panama (20%) saw the largest percentage growth rates. Nine countries served by more than 100,000 seats from Brazil last year witnessed a contraction in capacity. The largest cuts among these markets came on services to the UAE (18% down) and Germany (17% down). Brazil’s largest international links, based on departing seat numbers last year, were with the US and Argentina. 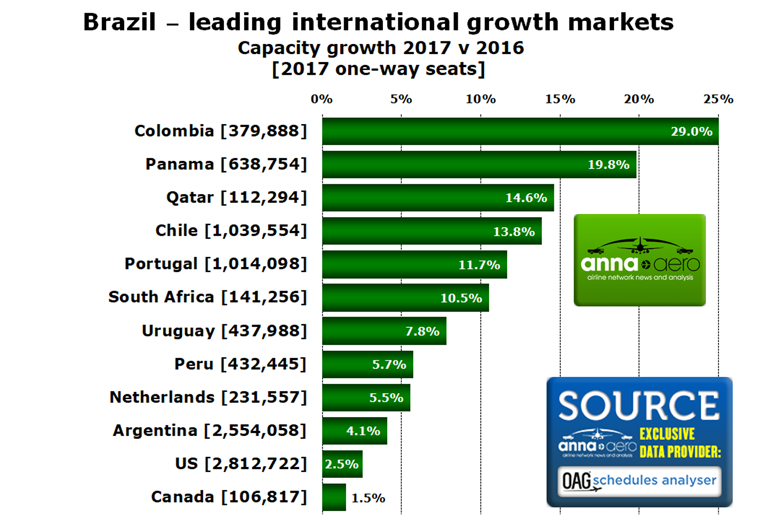 Outside of the 22 international markets linked to Brazil with 100,000 one-way seats or more, a further three countries enjoyed saw an increase in capacity from the South American nation last year. The number of seats available to Morocco jumped by 68% to nearly 71,000, while capacity to Togo was up 43% to more than 38,000 seats. There was also a modest increase on services to Ethiopia which supported 17,500 seats in 2017. 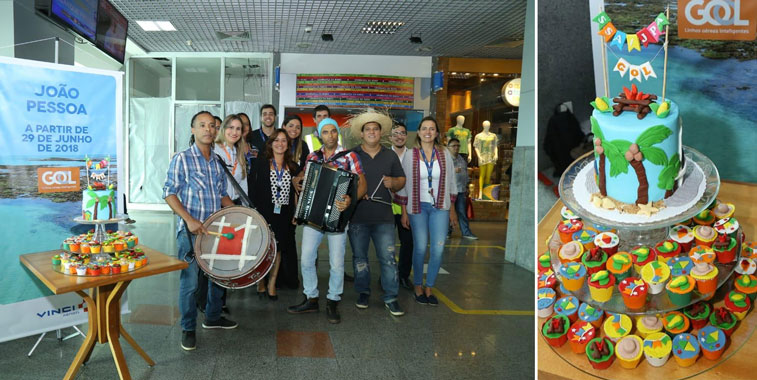 Despite being outgrown by international capacity in recent years, the Brazilian market remains dominated by domestic services, which accounted for 81% of all two-way seats serving the country’s airports in 2017. GOL launched its latest Brazilian domestic link on 19 June, a daily service between Salvador de Bahia and João Pessoa. To celebrate, the former airport held a route launch party which included a tropical-looking cake, designed to remember Saint John’s Day, widely celebrated all over Northeast Brazil.