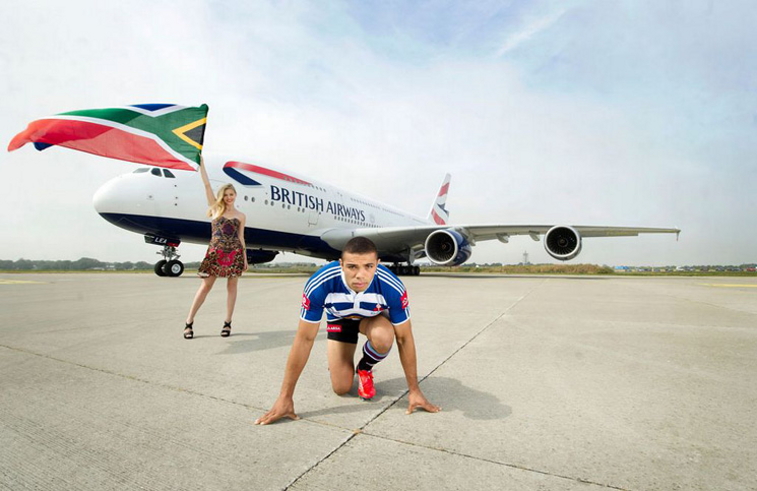 Springbok winger Bryan Habana prepares to race British Airways’ A380 in a 200m sprint at Durban in 2014. The carrier is set to launch three times weekly 787-8 direct services to the airport on 29 October 2018. The oneworld carrier last served the South African facility in March 1999.

Durban could be considered to be a microcosm of the modern African aviation industry. It is home to significant growth rates both as a whole and within the domestic market, yet routes have been shown to quickly fail and disappear. Alongside all of this, it remains relatively underserved to some regions, with the airport set to welcome its only direct service to Europe; a three times weekly service to London Heathrow from 29 October operated by British Airways.

Following a downturn in passenger numbers in FY2013/14, recent annual growth has been steady at Durban. Passenger numbers exceeded the previous high in FY2012/13 – the earliest available data point – by FY2015/16, and have been on an upward trend since then. In fact, passenger numbers have increased by some 24% since FY2015/16, and as will be discussed later in the article, the types of carriers serving the airport have changed significantly. 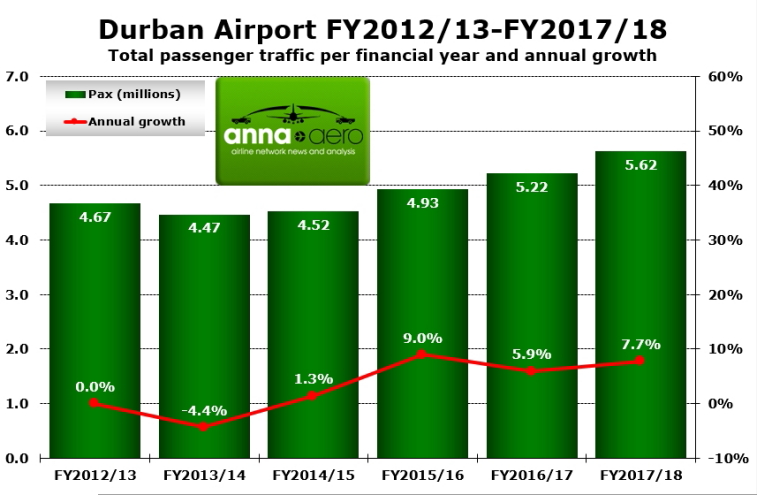 Although passenger numbers have increased significantly, the types of traffic using the airport have changed very little. The domestic market accounts for the majority of passengers using Durban, with 5.25 million of the 5.62 million passengers in FY2017/18 being internal traffic – some 93% of the total. Between FY2012/13 and FY2017/18, domestic travellers have accounted for between 93% and 95% of the total, illustrating just how important this market remains to Durban despite overall growth increasing or decreasing.

This strong domestic demand is reflected in the top country markets served directly from Durban. The domestic South African market easily outstrips the other nations, with close to 3.6 million available seats in 2018; over 90% of all available one-way seats and representing an increase of 4.3% from 2017 capacity levels. The UAE has seen a freezing of capacity with 172 fewer seats less in 2018 than in 2017, which coincides with Emirates’ network-wide capacity discipline. 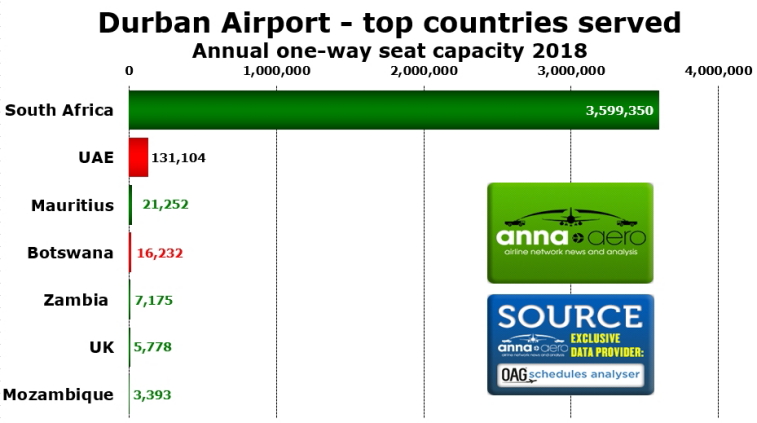 While domestic capacity has been increasing, the overall picture of the African market has been mixed. Although Zambia and Mozambique have seen steady growth, capacity into Botswana has dropped by 18% and Ethiopia, the Seychelles and Zimbabwe are no longer served according to OAG Schedules Analyser. However, these losses are partially offset by an 8% capacity increase to Mauritius compared to 2017, and from October 29 the introduction of three times weekly direct services to London Heathrow; Durban’s only direct service to Europe with the only other service being Istanbul via Johannesburg.

With regard to seasonality at Durban, Johannesburg and Cape Town airports, there are two stand out features. Firstly, that the seasonality profiles are excellent across all three, with none of the three airports exceeding a score of one on our SVID calculator (the lower the score the better). Secondly, the shallow peaks and troughs occur at different times of the year for the three airports. Durban’s off season occurs in January and February; the summer period in the Southern Hemisphere. However, Cape Town sees a relatively sharp drop in demand after March, reaching its most-prominent trough in June before beginning on a gentle upwards trend until December. Johannesburg, however, has a more undulating seasonality curve; experiencing peaks and troughs every quarter, yet averaging out to have the lowest seasonality score of 0.48.

Part of the reason for the differing seasonality trends between the three can be explained by their respective traffic composition. Durban sees a trough during the Southern Hemisphere summer months of January and February; which coincides with a reduction in domestic traffic, whereas domestic demand is stronger during the summer months of July and August. As domestic traffic accounts for the majority of passengers at Durban, this reflects on the airport’s the seasonality score. Likewise, passenger numbers at Cape Town reduce sharply and stay low into the autumn and winter period of April to August. In this case, international traffic accounts for 20% of the total, and this demand is predominately concentrated in the summer season of December to March. In 2017, there was a peak of 234,108 total international passengers using Cape Town in January, however this fell to just 121,707 in the winter month of June – hence the lower overall demand. Johannesburg has a relatively even split of international and domestic traffic (44% and 52% respectively in 2017 according to ACSA, with 4% other). As such, they average each other out, with international demand peaking in October to January, while domestic traffic is lower. Meanwhile, domestic traffic peaks during the winter season of July to October.

While overall Durban has seen year-on-year capacity growth and increases in passenger numbers since 2014, the picture for all its carriers has not been quite so rosy. Five of the 11 carriers operating out of Durban in 2018 have seen annual seat capacity drop (signified as red in chart below), whilst six have seen increases when compared to 2017. 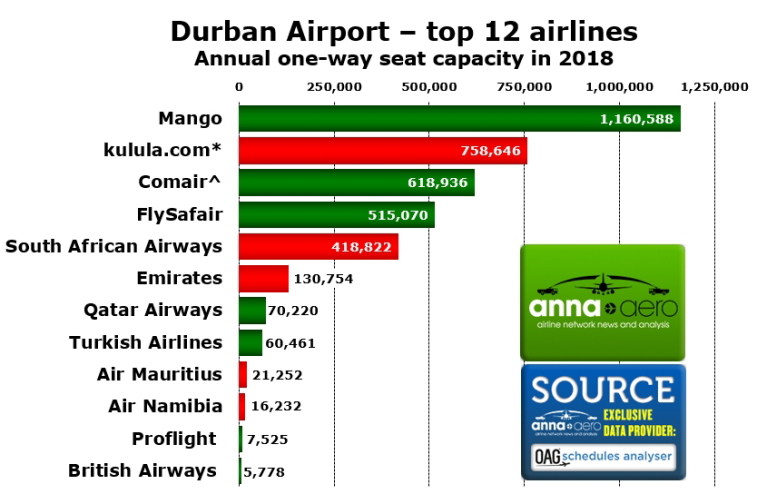 When combining the British Airways (BA) and kulula.com capacity, Comair becomes the largest single operator out of Durban with 1,377,582 one-way seats in 2018; representing an increase of 4% from 2017, as increases in BA franchise services outweigh the capacity reduction on the kulula.com operation. Perhaps the largest capacity change of note has been the South African Airways Group redistribution. South African Airways – incorporating subsidiaries SA Express and Airlink – has witnessed annual one-way seat capacity fall by 47%, from ranking second in 2017 with 786,442 seats to fifth in 2018 with just 418,822 seats. Meanwhile, its low-cost subsidiary Mango has seen its capacity increase by 26.5%; from 917,184 seats in 2017 to 1,160,588 seats in 2018.

International carriers Qatar Airways and Turkish Airlines have seen their capacity to Doha and Istanbul via Johannesburg grow by 32.9% and 0.48% respectively. Another carrier operating an indirect service is Air Namibia; serving Windhoek via Gaborone, Botswana. This perhaps illustrates the growing international market out of Durban – albeit being one-stop on occasions – and time will tell whether BA can create a viable direct service to Europe with its initially modest offering of a three times weekly service, providing a total of 5,778 seats from October 29 until the calendar year ends. 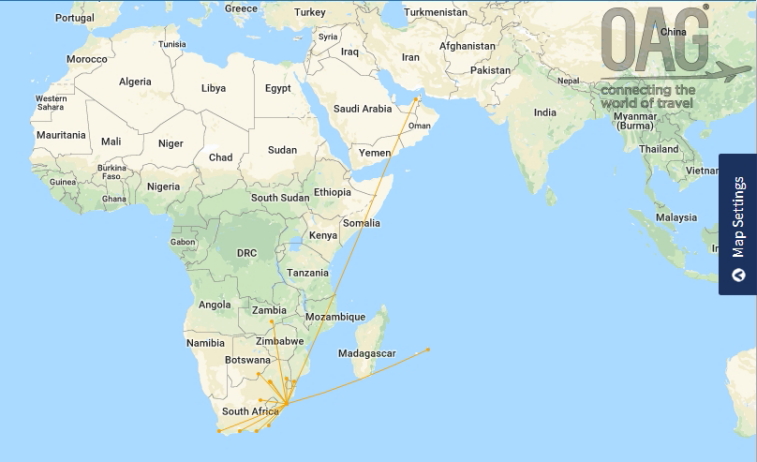 Adjustment has certainly been the order of the day for Durban’s July 2018 route map. Successful domestic routes like East London and Port Elizabeth have seen capacity increase significantly by 65.6% and 54.6% respectively, while others like Nelspruit have seen capacity reduce from 1,524 in July 2017 to 1,147 in July 2018.