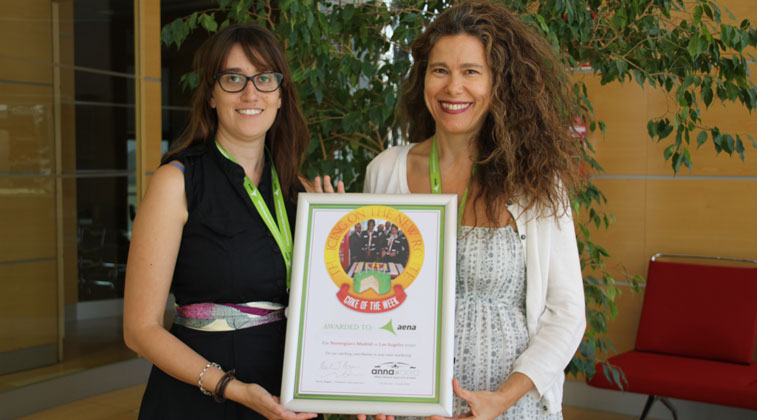 Madrid Airport this week celebrated winning the anna.aero Cake of the Week award, given to the Spanish hub for the bake which it presented at the launch of Norwegian’s service Los Angeles. Seen celebrating the airport’s win are Laura Revuelta, Head of Institutional Relations and Elisa Martínez, Head of Public Relations. Along with Los Angeles, Norwegian has also recently launched flights from Madrid to New York JFK, while Fort Lauderdale will begin this winter. 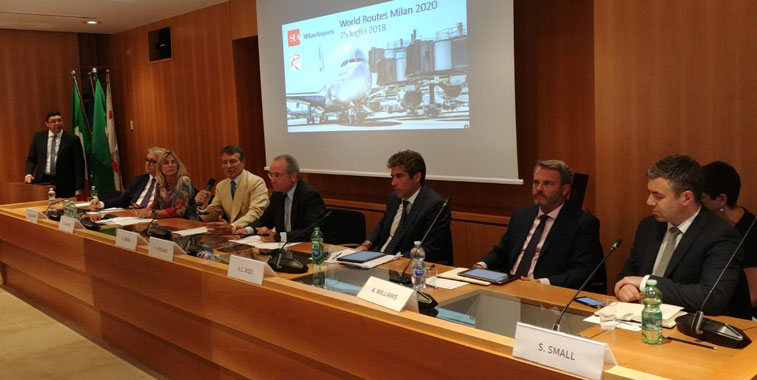 On 25 July it was confirmed that World Routes 2020 will take place in Milan between 5-8 September that year. On why SEA Group, which runs Milan’s Linate and Malpensa airports, was successful in their bid, Steven Small, Brand Director for Routes (right), said: “SEA’s aim is to further connect the city to the world, especially to Asia and the Americas, and hosting the 26th World Routes event will be a great platform for this. Milan has cultivated a thriving conference industry in recent times, having hosted EXPO 2015 which more than 20 million people attended – I feel that hosting the forum here will consolidate Milan’s growth and enhance the astonishing legacy of World Routes.” 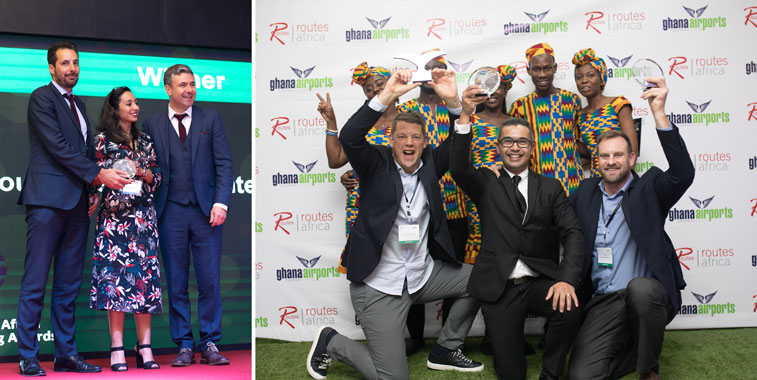 The winners of the Routes Africa 2018 marketing awards were announced at a ceremony in Accra on 17 July, with the overall winner going through to the final awards which will be presented at World Routes in Guangzhou on 17 September. Cape Town Air Access (above right) was announced as the overall winner, with the company also collecting the title for Destination Marketing. Awards were also available for an airport serving 4-20 million passengers, and a small airport serving fewer than four million passengers. Cape Town Airport scooped the former prize, with Abidjan Airport (above left) picking up the latter. The judges for this year’s Routes Africa awards were: Wilken Bellmann, Head of Network Planning and Scheduling, SunExpress; Mike Seetaramadoo, EVP Commercial, Cargo & Resource Optimization, Air Mauritius; Rosemary Ramakgapola, Manager, Alliances Africa and Middle East, South African Airways; and Richard Kyereh, Deputy Head of Commercial, Africa World Airlines. 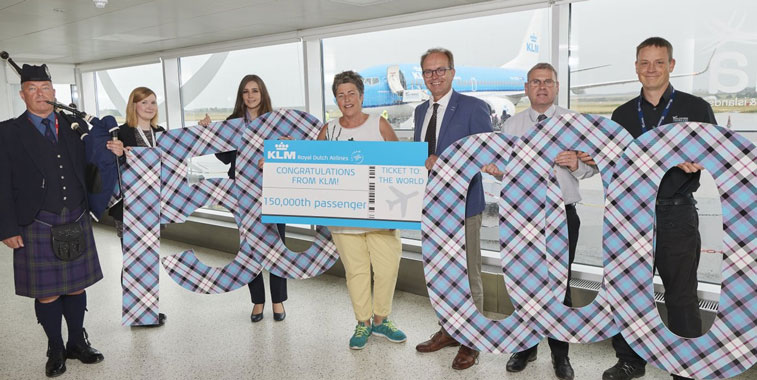 This week KLM celebrated carrying its 150,000th passenger on its route between Amsterdam and Inverness, a city pair that it launched on 17 May 2016. Pictured at the festivities on 20 July were: Local piper Chris Thomson; Cheryl Campbell, Customer Service Manager; Laura Barry, Facilities Supervisor; lucky 150,000th passenger Diane Rusling; Martin van de Pol, Air France KLM Regional Station Manager; Davie Geddes, Terminal Operations Manager; and Duncan Macdonald Dalcross Operations Manager, Inverness Airport. “Reaching this milestone so soon after the route’s launch is fantastic, it’s testament to the support we receive from the Inverness community. In March we introduced a larger aircraft on the route, upgrading from E170 and E190s to a 737 which has resulted in a capacity increase of 47%, and forward bookings are looking very positive for the summer season,” commented van de Pol. 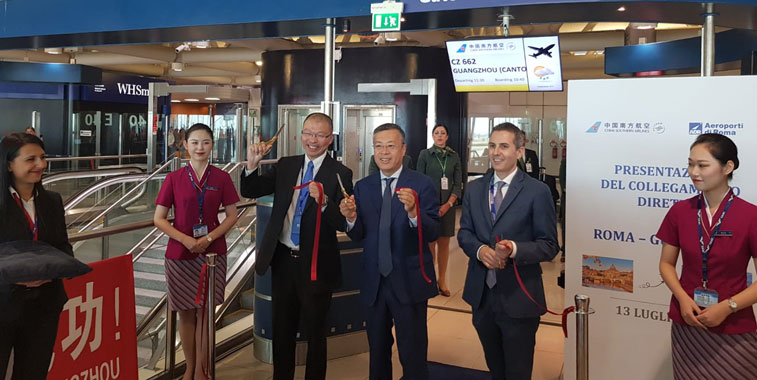 China Southern Airlines launched its latest non-stop European route from Guangzhou on 13 July, a service that the carrier will operate three times weekly. Among those at the launch were: Chen Ke, GM Italy, China Southern Airlines (third left) and Federico Scriboni, Head of Airline Traffic Development, Aeroporti di Roma (second right). Along with this route, the airline will also offer three weekly flights from Wuhan to Rome this summer,  a service which used to originate in Guangzhou. “The positive sales trends and a stable 80% load factor have allowed us to finally introduce a direct flight from Rome to Guangzhou that we are certain will consolidate even more the trade relations and bilateral exchanges between the south of China and Italy,” commented Ke. The airline also offers non-stop flights from Guangzhou to Amsterdam, London Heathrow, Paris CDG and Moscow Sheremetyevo this summer when referencing OAG schedules. 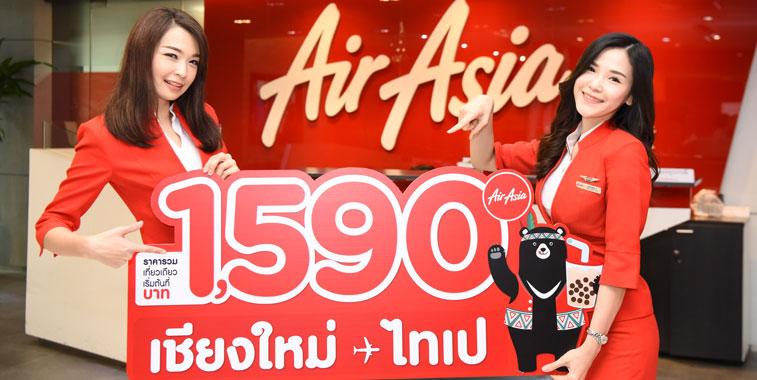 Thai AirAsia announced on 19 July that from 30 September it will launch a direct service between Chiang Mai to Taipei Taoyuan, a route that the carrier will operate four times weekly using A320s. Thai AirAsia currently operates 13 domestic and international routes from its Chiang Mai hub. Internationally, the airline flies from Chiang Mai to Macau, Hong Kong, Changsha, Hangzhou, Kuala Lumpur and Yangon. No airline presently offers flights on the city pair. 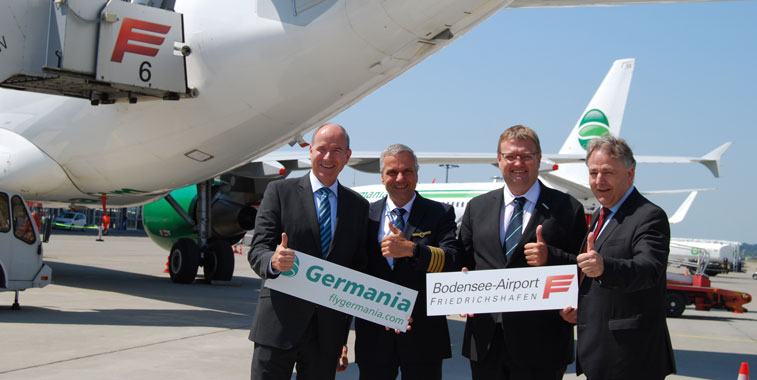 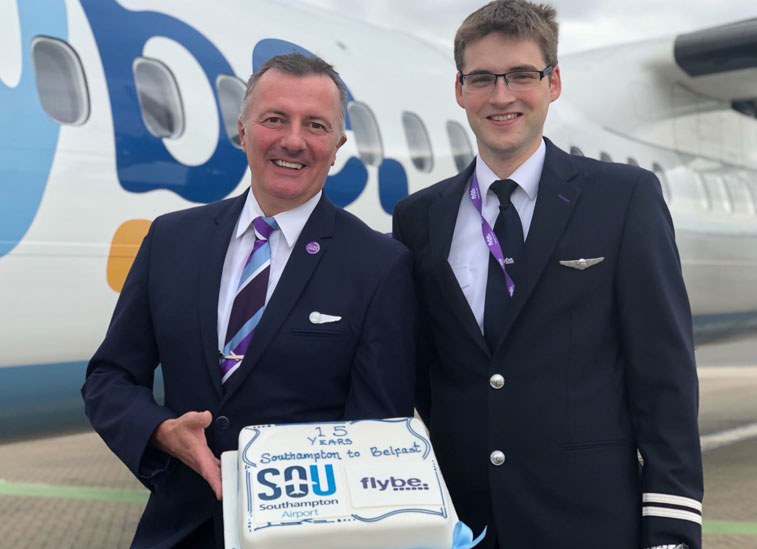 Flybe this week celebrated its 15-year anniversary on its service between Southampton and Belfast City, with the former airport celebrating the occasion with cake. Roy Kinnear, Flybe’s CCO, commented on the news by saying: “We are pleased to have been operating this very popular route from Southampton to Belfast City for 15 years. In that time, it has gone from strength to strength and we now operate up to three flights a day to the heart of Northern Ireland’s capital, the airport being a mere ten minutes from the bustling city centre.” The first direct flight from China landed in Bologna at 08.00 on 16 July, after a 10-hour flight from Shenyang, the capital city of Lianoning Province. The service is operated by Italian carrier Blue Panorama Airlines with a 267-seat 767-300, with this being a charter operation by Phoenix Travel Worldwide with package holidays from Italy to Europe with arrival and departure from Bologna. The 240 passengers were welcomed by: Enrico Postacchini, Chairman of Bologna Airport; Antonello Bonolis, Business Aviation and Communication Manager; Virginio Merola, Mayor of Bologna; Raffaele Donini, Regional Minister for Transport; Stefano d’Aquino, Bologna Welcome Commercial Manager; Remo Della Porta, CCO, Blue Panorama Airlines; and Angelo Morano, COO, Welcome Chinese. The flight marks the official start of the “China Program” developed by Bologna Airport, Blue Panorama Airlines and Chinese tour operator Phoenix Travel Worldwide, in cooperation with Welcome Chinese, with an aim of attracting Chinese tourists to Europe. The group of 240 passengers are engaged in a two-week tour of Italy, before flying back to Shenyang. 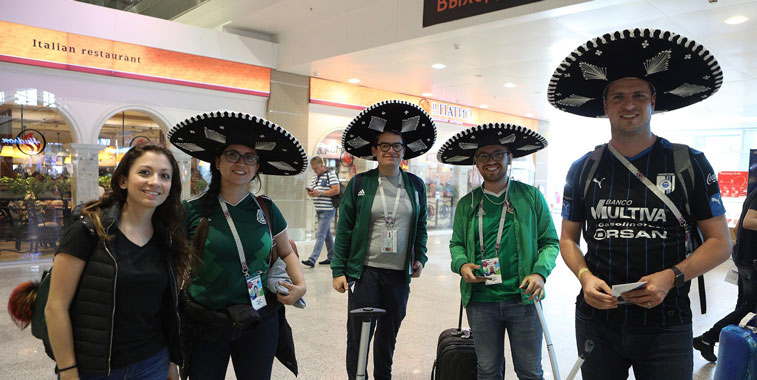 While the FIFA World Cup was certainly a win for France, another winner of the competition was St. Petersburg Airport, as it announced this week that during the competition it handled 2.2 million passengers between 13 June and 15 July, an increase of over 11% versus the same period of 2017. In total the Russian city hosted seven games, including one semi-final and the third place play-off. The peak day was 11 July, the day of the semi-final between Belgium and France, with the airport greeting 74,608 passengers and 884 aircraft movements, of which 264 were private jets. 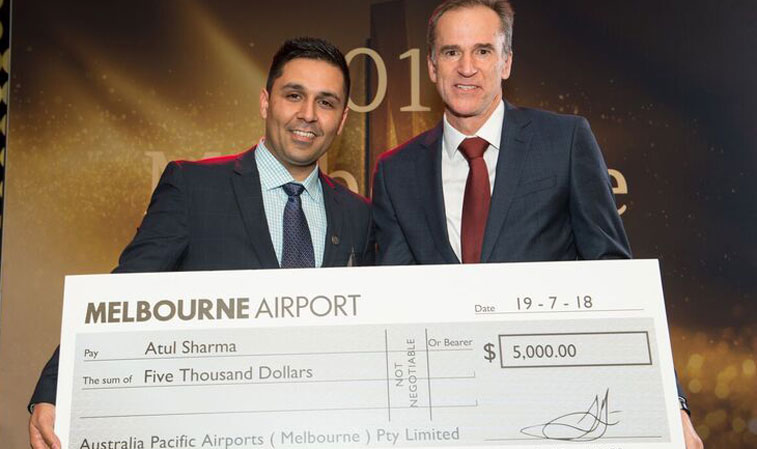 Melbourne Airport recently handed out its Excellence Awards. Among the winners was Atul Sharma (left) of Menzies Aviation, who was presented with the Chairman’s Award for Excellence by Lyell Strambi (right), CEO, Melbourne Airport, with the award also coming with a prize of $5,000 AUS (€3,168). This year more than 150 people were nominated for their outstanding display of customer service, commitment to safety and integrity. Nominees were eligible for 16 award categories that touched on all areas of the business covering parking and ground access, retail, property and aviation. Nominations are now open for next year’s event, with people eligible to make their recommendations at this link. 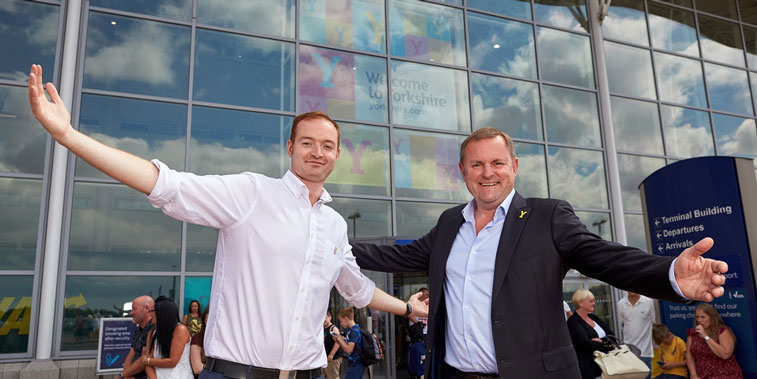 Doncaster Sheffield Airport is giving passengers an even warmer welcome to the region as of 24 July, following the installation of iconic Welcome to Yorkshire branding in the terminal and a revamped tourist information centre. The refurbishment is a joint investment between the airport and Welcome to Yorkshire as part of a longstanding partnership, working together to attract greater levels of leisure and business tourism to the region. Showcasing the brand at the UK airport are John Huddleston, Communications & Corporate Affairs Manager, Doncaster Sheffield Airport and Sir Gary Verity, CEO of Welcome to Yorkshire.