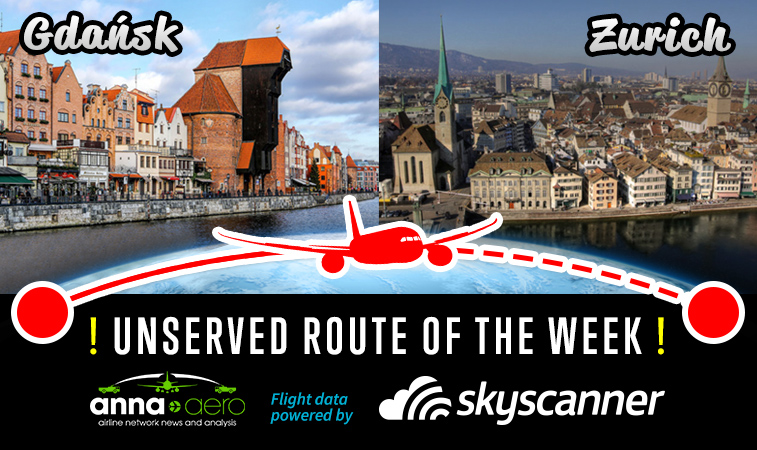 Two very different looking, but equally captivating waterfronts await travellers at either end of this week’s Unserved Route of the Week between Gdansk and Zurich. The two European cities are economically linked too explains Iwona Tomczynska, Marketing Manager at Gdansk Airport. “The reason for this economic exchange is mainly the well-developed industrial base in both countries, the geographic location and high level of human capital. Swiss companies have already invested around 17.5 billion PLN in the form of direct foreign investments.”

With over 40,000 searches in the last year, a potential city pair from Gdansk to Zurich has been identified as this week’s “Skyscanner-anna.aero Unserved Route of the Week” – a powerful analysis based on aspirational data captured from the Skyscanner.net flight comparison site used by +70 million unique visitors per month. “From Gdansk there is no air connection to Switzerland,” states Iwona Tomczynska, Marketing Manager at Gdansk Airport. 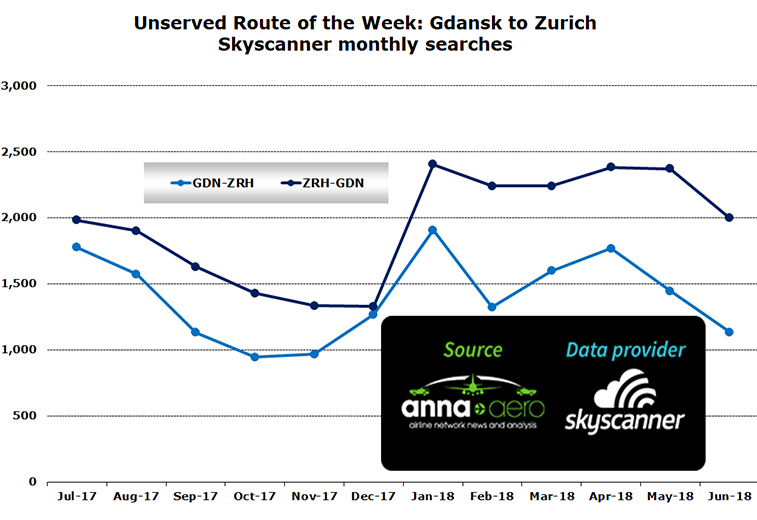 anna.aero thinks SWISS or Wizz Air should add this service

Skyscanner demand on this week’s unserved route shows a slight preference towards the Swiss end of the city pair, with a 58/42 split, so on this basis we looked at potential carriers at the Zurich origin first. According to OAG schedules for the week commencing 24 July, the largest carrier at Zurich is SWISS (52% share of weekly seats). The Star Alliance carrier’s route network from the airport presently consists of three Polish destinations. These are a 19 times weekly service to Warsaw Chopin, a daily service to Krakow, as well as a three times weekly operation to Wroclaw. Flights to the latter Polish city were added last October by SWISS, so clearly regional points in the country are on the airline’s route expansion agenda. Indeed, having launched services to destinations like Bordeaux, Kiev Boryspil and Marseille earlier in 2018, and with a 12 times weekly Q400 service to Bremen planned for 28 October this year, European growth seems to be a consistent element to SWISS’ network development strategy. On this basis, and with this compelling Skyscanner data now in evidence, there appear to be no mountains for SWISS to move before it can seriously start to consider its fourth Polish route.

Edelweiss Air is the second-largest carrier (8.1% share of weekly seats) at the Swiss gateway, presently offering 51 non-stop destinations. While 30 of these are found within Europe, the carrier caters primarily for outbound Swiss leisure traveller demand, and as such a service to Poland should be considered as unlikely. Moving onto the third largest airline at Zurich, namely Eurowings (2.7% share of weekly seats), the LCC only offers inbound services from Germany to Zurich, with flights from Düsseldorf (35 times weekly), Cologne Bonn (25) and Hamburg (20) being operated. With this in mind it would appear that the flag carrier is the best option to serve this city pair from the Swiss end.

Contemplating the Polish end of the route, Gdansk’s leading capacity provider of its current 12 serving airlines is Wizz Air, which offers 48% of the airport’s weekly seats. While the ULCC flies to 30 destinations from the Polish city, it does not serve any points in Switzerland yet. The alpine nation is not a big market for Wizz Air; it flies to 13 destinations from Basel, only two from Geneva and none from Zurich. However, this lack of activity at the biggest hub in Switzerland should not be considered as a barrier for the carrier, as exampled by its recent base opening in Vienna. An operation at Zurich could therefore be very much on the cards, and given its strength in the Polish market, a Gdansk service may be part of that network decision. In fact Gdansk was one of the routes that Wizz Air introduced from the Austrian capital.

When looking at the previous year of search data (graph above), the busiest month (from Zurich) is January 2018, with over 2,400 searches. On this basis the anticipated booking profile of the route has been allocated as short-haul leisure, resulting in around 62% of travellers on this potential sector wanting to book between seven to four months before departure. This would seem to indicate that the busiest months for traffic will be between May and August. Using the same methodology for the Gdansk end of the sector, the peak months for traffic will also be between May and August.

According to OAG Traffic Analyser, because there is no direct service, the top three connecting options chosen by those passengers who did book travel between Gdansk and Zurich in the last 12 months (year ending May 2018) indicates that the majority of connecting travellers used Chopin (25%), Munich (22%) and Copenhagen (19%). A total of 14 different transfer airports were used by travellers looking to connect between the two cities. 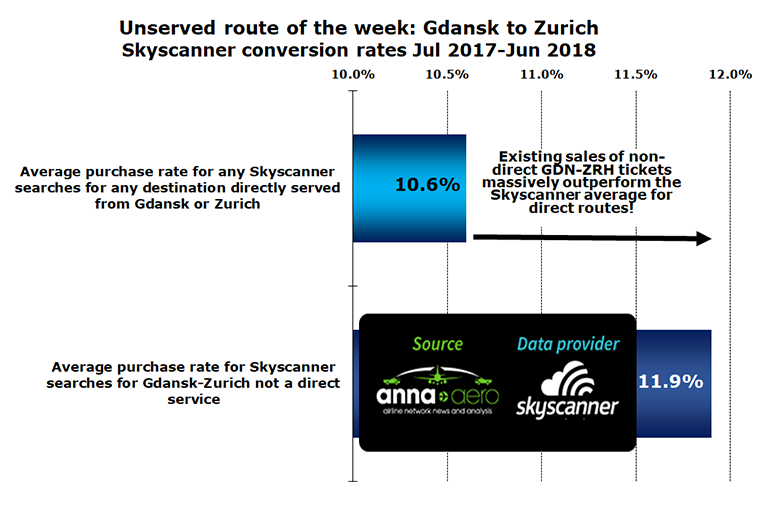 With a lack of direct services, travellers between these two cities have clearly become used to these one-stop alternatives. However, the market demand is extremely buoyant – as the graph above shows, with 11.9% of the Skyscanner searches for these indirect Gdansk to Zurich services converted into ticket sales – that’s more than the average 10.6% achieved for Skyscanner conversion rates for all direct routes available from either Gdansk or Zurich. However, with over 40,000 annual searches in the last year, and with the sector being operated by an appropriately-sized aircraft for the type of route, a two or three times weekly service should be immediately viable for the airline choosing to start this potential city pair. “According to a Deloitte report, in Poland Swiss companies employ about 35,000 people, and cooperation between our two countries is constantly developing, primarily in the areas of investment and trade.  Therefore, we anticipate that the air connection between Gdansk and Zurich would be very popular,” concludes Tomczynska.