Airbus and Boeing’s productivity rate improves 3.5% in H1 2018, with the North American manufacturer responsible for 55% of deliveries 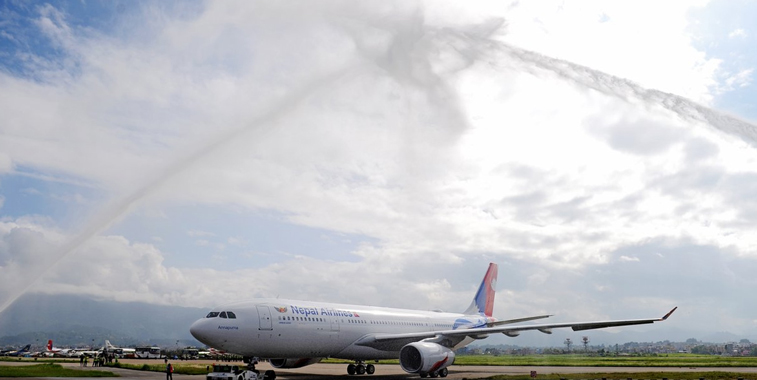 Nepal Airlines took delivery of the first of two A330-200s destined for the carrier in June, with the first aircraft seen here being welcomed with a water arch salute upon arrival at Kathmandu. For the first half of 2018, Airbus delivered 64 wide-body aircraft, accounting for only 37% of wide-body deliveries during this period. When comparing H1 2018 with H1 2017, it shows that wide-body productivity dropped 5.5% according to Airbus and Boeing data.

With the last day of June marking the end of the first half of 2018, anna.aero was able to analyse the delivery performance of aircraft manufacturing giants Airbus and Boeing against each other for the first six months of the year. In total, Airbus and Boeing delivered 681 aircraft in H1 2018, representing a 3.5% (23 units) increase versus the 658 which were handed over to customers in H1 2017. This shows that during the last three months the two have improved productivity, as both only matched their delivery rate in Q1 2018 when anna.aero analysed it against the companies’ Q1 2017 distribution. The table below further breaks down the companies’ delivery rates for H1 2018 and how they differ with the results encountered during the first half of 2017.

What can be seen in the table above is that Boeing has further strengthened the lead it has over Airbus in the 2018 delivery race. Having handed over 63 more units that its European rival during the first three months of the year, at the half way stage of 2018 it has advanced its lead to 75 units. In April it handed over less units than Airbus for the first time this year, however in May and June Boeing produced 19 more aircraft than its European competitor. Some of the key facts for the first half of this year when it comes to aircraft deliveries for the world’s leading aircraft producers include:

The most interesting key fact from above is perhaps the downturn in wide-body productivity. A closer look at the numbers reveals that both manufacturers reported a drop in distribution, with Airbus delivering three less wide-body variants in H1 2018 versus H1 2017, while Boeing showed a 6.0% slowdown (seven less units). In terms of the single-aisle market, Airbus matched its H1 2017 quota in the first six months of 2018 (239 units), while Boeing reported 14% growth in narrow-body deliveries, having distributed 269 units versus 236 during the same period of 2017.

In June, Airbus and Boeing combined delivered 162 aircraft, a 17% improvement on the 139 units the duo delivered during the same month last year. The result is also an improvement compared to the companies’ joint results for May, when the two encountered a productivity rise of only 2.6% versus May 2017. Of all deliveries in June, 76% were narrow-body and 24% wide-body. It should also be noted that June’s deliveries reveal that 38% of Airbus’ went to LCCs, while when considering Boeing’s 82 unit handovers, only 7.2% were destined for a low-cost operator, giving this business model an average for all deliveries in June of 26%, matching the result of May. 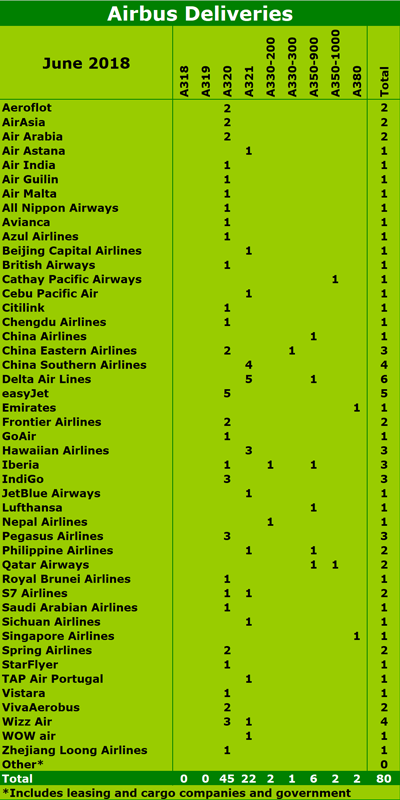 During June, Airbus handed over 80 aircraft to 46 different airlines, nine more units than it managed in May. The result is the best that the company has managed so far this year, with March having been the best previous month with 66 unit deliveries recorded. The result for June is also a marked improvement on its result for same month last year when it handed over 64 units, highlighting a 25% improvement in productivity for June. Of the 80 deliveries, 67 were narrow-body and 13 wide-body.

Of all deliveries in June, 39% of those went to low-cost airlines. It should be noted that of the 46 different airlines to receive Airbus aircraft in June, 24 were Asia based (34 units), 11 in Europe (24 units), seven in the Americas (16 units) and four in the Middle East (six units).

The most popular aircraft type to be delivered in June was the A320 (45 units), followed by the A321 (22). easyJet was the leading customer of the A320, with Europe’s second biggest LCC collecting five of the type. IndiGo, Pegasus Airlines and Wizz Air were the second-favourite recipients of the A320, with the low-cost carriers accepting three each respectively. The number one recipient of the A321 was Delta Air Lines, the same as it was in May, with the SkyTeam carrier collecting five during the sixth month of this year. China Southern Airlines was the second-biggest recipient, picking up four, while Hawaiian Airlines was third, receiving three.

Looking at the wide-body market, Airbus handed over 13 aircraft, with the A350-900 once again being the most popular aircraft with six deliveries to six separate airlines, accounting for 48% of all wide-body aircraft delivered by Airbus in June. With regards to the A350-1000, June was monumental as Cathay Pacific Airways became the second-ever operator of the aircraft, joining Qatar Airways, which too collected its third of the type. Emirates and Singapore Airlines also collected a new A380 each in June. 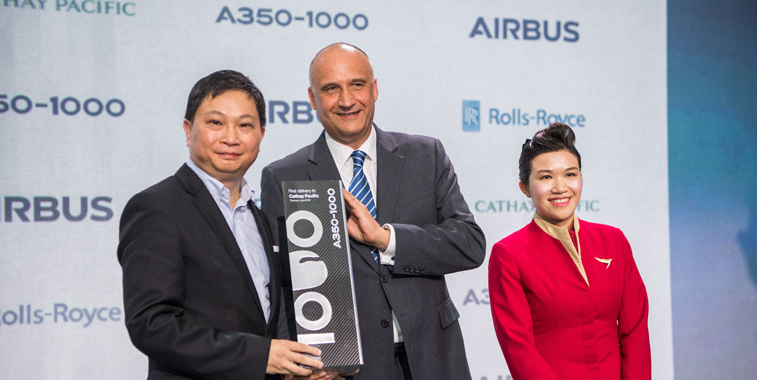 In June Cathay Pacific Airways became the second-ever operator of the A350-1000, joining Qatar Airways. At the hand over ceremony, Paul Loo, Chief Customer and Commercial Officer, Cathay Pacific Airways, exchanged gifts with Eric Schulz, CCO, Airbus. “We already have one of the youngest long-haul fleets in the sky, and with the arrival of the A350-1000, our fleet is only going to get younger. The aircraft follows the successful entry of the A350-900 variant which has enabled us to expand our long-haul network at a near unprecedented rate,” commented Loo. 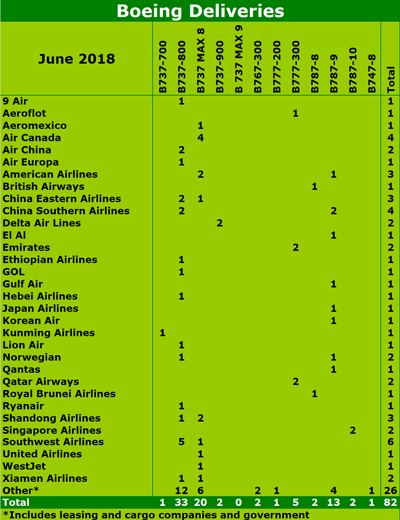 Boeing distributed a total of 82 aircraft in June, its second best month of the year so far for deliveries after March when it handed over 91 units. The company’s productivity rate climbed 7.4% during H1 2018, while June this year showed a marked improvement of 9.3% versus June 2017. In the sixth month of this year, Boeing’s unit deliveries were made-up of 56 narrow-body and 26 wide-body aircraft.

While 39% of Airbus’ deliveries went to low-cost operators, the picture is slightly different for Boeing, with only 7.3% (six units) of its hand overs going to airlines following this business model. With regards to its delivery geographical split, 14 airlines were based in Asia (24 units), seven in the Americas (18 units), five in Europe (six units), four in the Middle East (six units), and one each in Africa and Australia (one unit each), while the remaining 26 aircraft went to leasing, cargo and various government authorities.

The most popular Boeing aircraft type to be delivered in June was the 737-800 (33 units), followed by the 737 MAX 8 (20 units). Southwest Airlines was the leading customer by collecting five of the type, while Air China, China Eastern Airlines and China Southern Airlines all collected two each respectively. The leading customer of the 737 MAX 8 was Air Canada which picked up four units. Among the new customers of the 737 MAX 8 in June were Jet Airways and China’s Shandong Airlines. During H1 2018, Boeing delivered 80 737 MAX 8 to various customers, with a total of 154 having been distributed since being introduced to commercial service in May 2017.

With regards to Boeing’s wide-body production, the 787-9 was a highlight, with 13 being handed over to various clients, with China Southern being the leading customer by receiving two. Singapore Airlines collected a further two 787-10s, meaning that at the half way stage of 2018 it is now operating six of the aircraft type, and it still the only operator of the variant. Along with these aircraft, two 787-8s were also distributed, with the two units destined for British Airways and Royal Brunei Airlines. 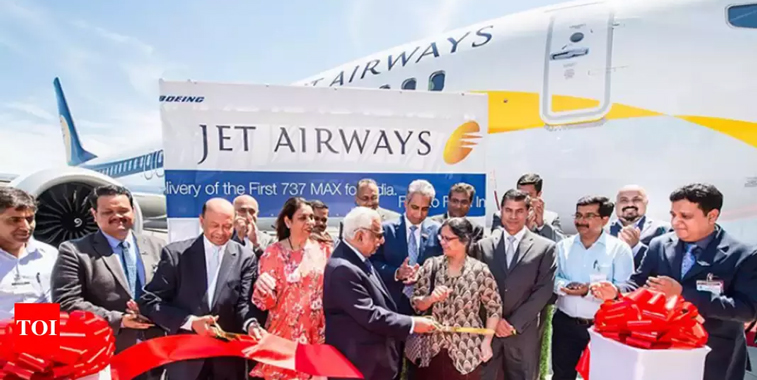 Jet Airways took delivery of its first 737 MAX 8 in June, with Naresh Goyal (centre), Chairman of Jet Airways, saying of its arrival into the Indian carrier’s fleet: “The new 737 MAX is a critical element to our future growth strategy and we are proud to become the first airline in India to introduce this brand new aircraft to our customers.” During H1 2018, Boeing delivered 80 737 MAX 8s to various customers, with a total of 154 having been distributed since being introduced to commercial service in May 2017.