Allegiant Air traffic from Punta Gorda up 37% in H1 2018; six based aircraft operating a 40-destination network; Cincinnati is leading route 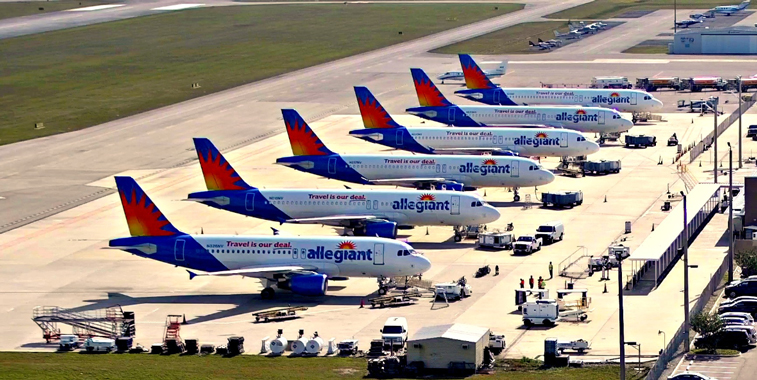 Allegiant Air first starting flying to Punta Gorda in August 2009, operating twice-weekly services from Knoxville and Greenville/Spartanburg. Today the airport is the airline’s fourth biggest operation, with OAG schedules showing that the carrier has six A320s stationed at the Gulf Coast city. The only US airports which see a busier operation from Allegiant this summer are Orlando Sanford, St. Pete-Clearwater, which is 163 kilometres away from Punta Gorda, and Las Vegas. Currently the airline is the only serving carrier at Punta Gorda, with Frontier Airlines having ended its services from Chicago O’Hare, Philadelphia and Trenton in April 2017 after just seven months of operation.

In 2017 Allegiant flew just under 1.24 million passengers from Punta Gorda, an increase of 13% versus the 1.10 million it flew from the facility in 2016. During the first six months of 2018, Allegiant transported 857,705 passengers to/from Punta Gorda, representing a 37% increase from the 628,248 people it flew from the Floridian airport during the same period of 2017. Overall, Allegiant transported just under 12.24 million passengers last year according to data provided by the Bureau of Transportation Statistics, meaning that 10% of the airline’s passengers flew through Punta Gorda in 2017. 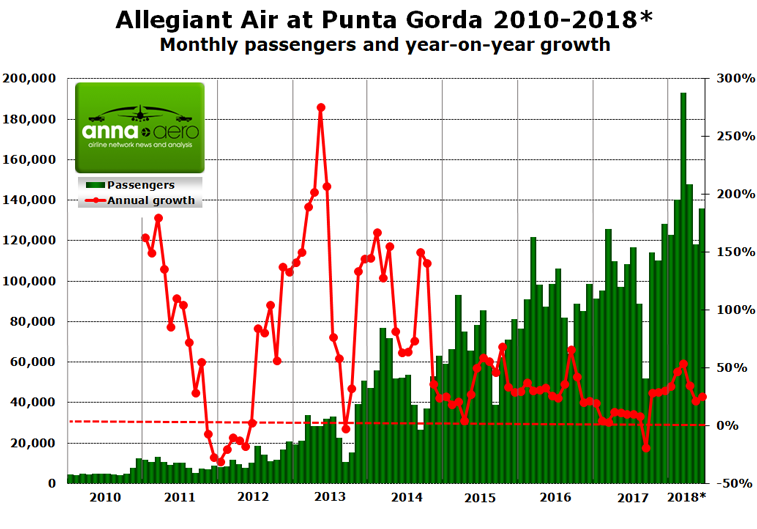 Source: Punta Gorda Airport. *data only for January to June 2018.

While Allegiant has maintained double-digit growth since October 2017, it should be noted that in September last year the carrier reported a 19% reduction in passengers from the airport, as a result of Hurricane Irma. With Spring break falling between March and April, and obviously Christmas in December, it is no surprise to see that these two months are the busiest periods in the year for the airline due to its strategy of targeting leisure and VFR traffic. Last year, December was the busiest month, with it seeing 148% more passengers than the quietest month last year – September. However, taking out this month due to Hurricane Irma, when we compare with August, the second quietest month last year, traffic throughput was only 45% greater.

This summer Allegiant Air is offering 40 destinations from Punta Gorda this summer, with the most recent route launch having been Nashville in June. The biggest jump in destinations served came in S17, with a net gain of seven routes being added. Last year Allegiant introduced service to Cleveland, Flint, Louisville, Providence, Stewart, Rochester, Milwaukee and St. Cloud. During this period a route also ended, with flights to Youngstown ceasing after four years of operation according to OAG. 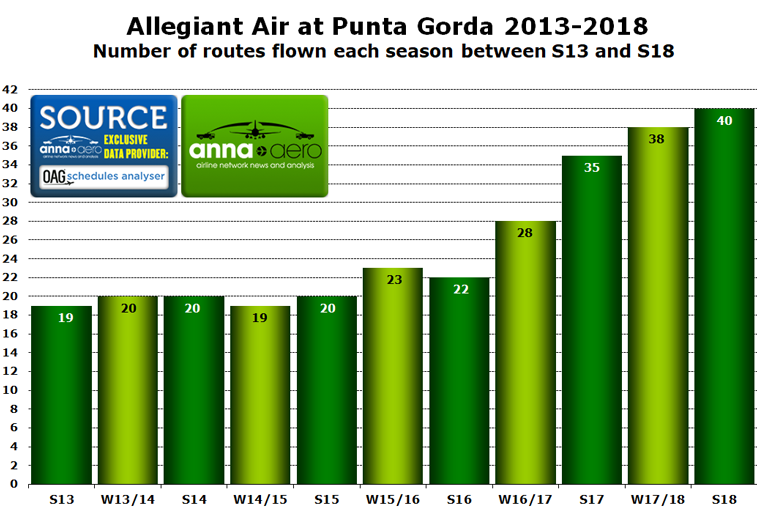 Looking ahead towards W18/19 and S19, Allegiant has not announced any new routes from Punta Gorda, however as the airline has only released limited schedules until mid-February, it is unclear if the carrier will have an increased seat capacity from the airport for the full winter season. However, when looking at the period between the beginning of November 2018 and the end of January 2019, Allegiant is reporting a small reduction in the number of seats it is offering from Punta Gorda, with capacity down 1.7%. Despite this, schedules for the upcoming winter season can still be adjusted. With St. Pete-Clearwater, just up the road from Punta Gorda, showing a 10% reduction, this highlights that things are still likely to change as the airline further tweaks its winter flying programme.

With seven weekly frequencies, Allegiant’s route to Cincinnati is its number one service from Punta Gorda this summer. It is one of only four routes that the airline is operating this summer with more than three weekly frequencies, with the others being Indianapolis, Pittsburgh and Belleville. Of the airline’s leading routes, three have seen reductions in weekly departures during the period analysed, with Chicago Rockford and Asheville seeing one less weekly flight this summer, while Lexington has lost two rotations. 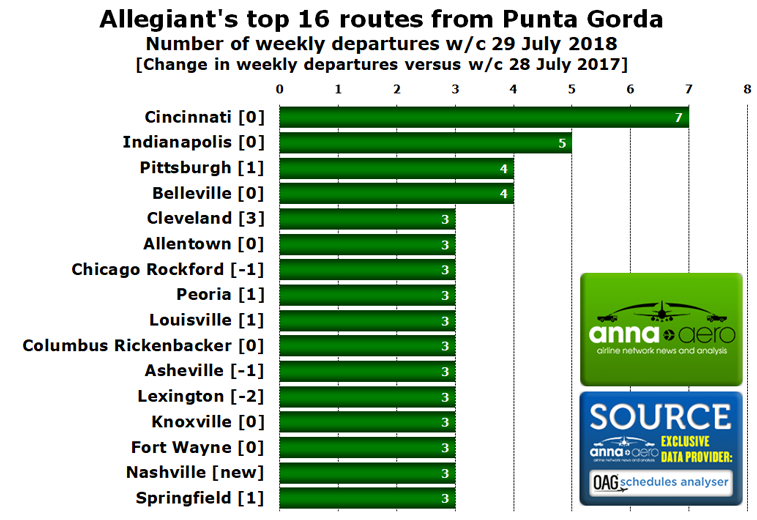 Outside of the top 16 routes, the remaining city pairs outside of this ranking are flown twice-weekly. During the week analysed, Allegiant offered 96 departures from Punta Gorda, up 14% from a total of 84 during the same week last year. The busiest days of the week for the airline at Punta Gorda this summer are Fridays, Saturdays and Mondays with 16 departures on each, while Wednesdays, Thursdays and Sundays see 15. Tuesdays are the quietest, with Allegiant offering just 11 departures on the second day of the week. 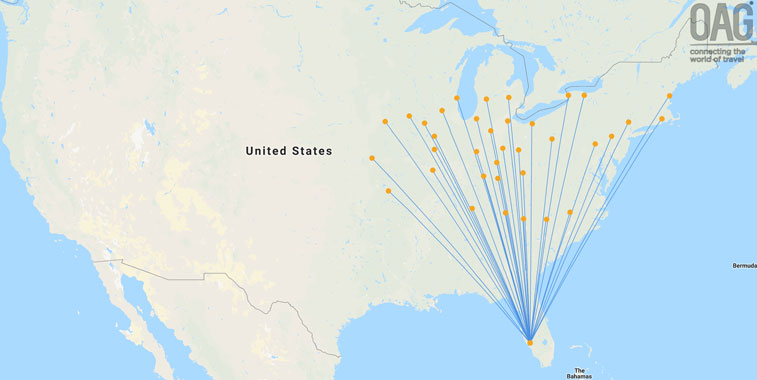 Allegiant Air’s route map from Punta Gorda shows the focus of its strategy, mainly targeting VFR and leisure passengers in the East and Central US to Florida. This summer the airline is flying to 40 destinations from Punta Gorda, up from just two destinations in 2009. The airline current has six Airbus aircraft based at the Florida airport.