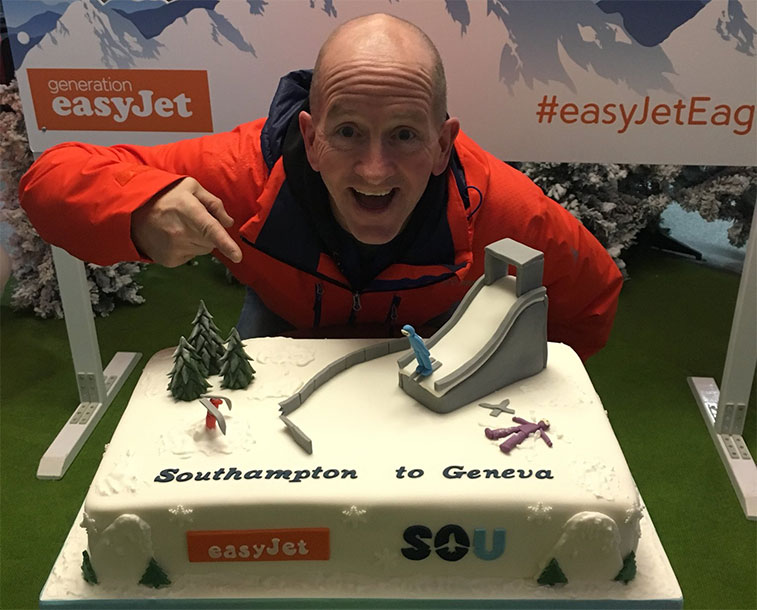 Southampton saw 2.07 passengers pass through its terminal in 2017, a new record. The airport welcomed a new carrier to the departures board last year when easyJet commenced three times weekly flights to Geneva for the ski season. On hand to celebrate the launch was Eddie ‘The Eagle’ Edwards, the iconic British skier and sporting hero.

Southampton Airport is located in the centre of the UK’s South Coast, with its namesake city, renowned for its maritime industries, and the nearby port of Portsmouth both falling within its catchment area. The airport has a historic claim to fame, in that it was from here that the Supermarine Spitfire prototype first took to the skies in the 1930s. In 1990 Southampton Airport was purchased by the British Airports Authority (BAA) which opened a new terminal in 1994. In 2014,it was acquired by AGS Airports Ltd, along with Glasgow and Aberdeen.

When Southampton’s current passenger terminal opened in 1994 the airport was handling about 469,000 passengers per year. In 2017 it set a new annual traffic record, welcoming 2.07 million passengers. The airport enjoyed a strong period of growth from the early 1990s until the mid-2000s. From 1993 until 2007 there was only one year-on-year decline in traffic, with that occurring in 2002. The strongest annual traffic increase during this period occurred in 2003, with passenger numbers up by 54% compared to the previous year. Over the past 10 years, the airport witnessed a decline in traffic, followed more recently by a strong recovery. In 2007 Southampton welcomed 1.97 million passengers, but this dropped to 1.95 million in 2008. Traffic then dropped further over two consecutive years to 1.73 million passengers in 2010. Passenger numbers rose and fell over the next five years with 1.78 million handled at the south coast facility in 2015. The last two years have seen a strong increase in traffic, with a 17% growth spurt between 2015 and 2017 pushing Southampton through the two million passenger barrier for the first time last year. 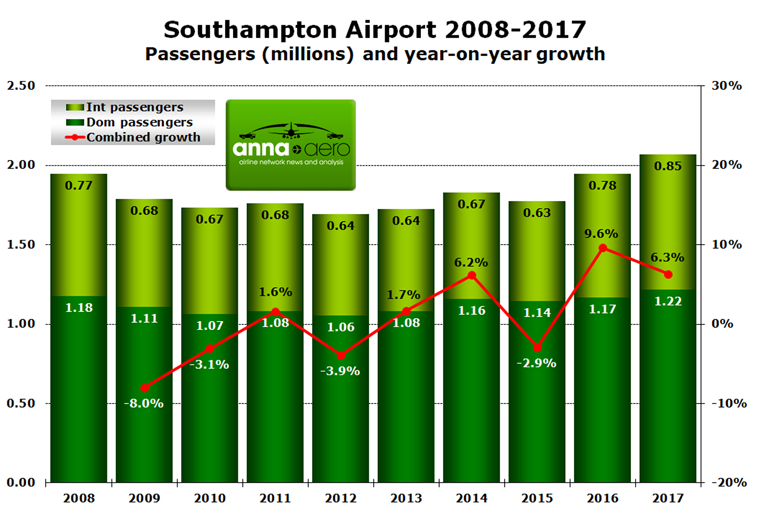 Domestic passengers have historically accounted for the highest proportion of Southampton’s overall traffic, but international travellers have been growing at a faster rate over the past 10 years. In 2008 the airport welcomed 1.18 million domestic travellers, and this increased by 3.3% to 1.22 million in 2017. In contrast 768,487 international passengers passed through the airport in 2008, and this figure had risen by 11% to 853,582 by 2017. The proportion of Southampton’s total traffic represented by domestic passengers subsequently dropped from 61% in 2008 to 59% in 2017.

Over the same period, the average capacity available on departing flights from the airport increased from 67 seats to 72. An interesting feature of operations at Southampton is that the majority of the available capacity is provided by turboprops. These aircraft accounted for 89% of the two-way seats serving the airport in 2017, with regional jets (10%) and narrow-bodies (1%) operating the remainder.

Eight airlines offered scheduled flights from Southampton during 2017. Flybe is the dominant carrier and has been for some time. Over the past 10 years, the regional operator’s market share ranged from 86% of the available one-way capacity in 2008, to as high as 95% in 2013. It accounted for 89% of the capacity available from the airport in 2017. Flybe’s grasp over Southampton seats has increased over the past two years, after Blue Islands and Eastern Airways, which both previously served the airport under their own brands, became its latest franchise partners in 2016 and 2017 respectively. In S18, Blue Islands is operating services to Jersey and Guernsey under the Flybe brand, while Eastern is the operating airline on Flybe’s published services to Leeds Bradford and Rodez in France.

During the week commencing 31 July, Flybe and its franchise partners will account for 94% of Southampton’s departing seats, with the airport being served by four published scheduled carriers in total in peak S18. Flybe branded services will operate to 30 destinations this summer. Even without the capacity operated by its franchise partners, Flybe’s mainline fleet would still provide 78% of the available weekly capacity this summer. The next largest carrier on an operating level is Blue Islands, which accounts for 13% of weekly S18 departures on its high-frequency, Flybe-branded Channel Island links. 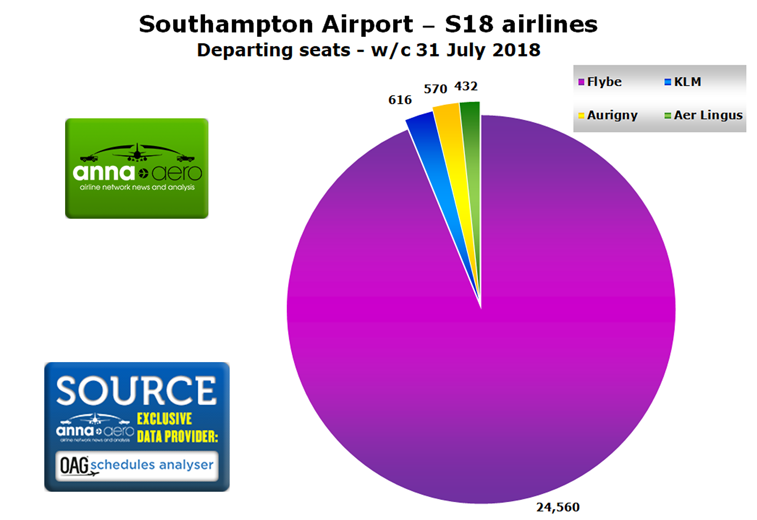 Of the other three carriers offering scheduled capacity from Southampton this summer, KLM offers the most seats, followed by Aurigny and Aer Lingus. Each of these carriers operates to a single destination. The Dutch flag carrier links the UK South Coast to its Amsterdam hub, Aurigny flies to Alderney in the Channel Islands and Aer Lingus serves Cork. KLM and Aer Lingus have both marginally increased their capacity in peak S18 compared to the equivalent week in S17. The Dutch full-service operator usually provides 12 weekly flights to Amsterdam with double-daily services on week days, and daily flights at weekends, but during the peak summer holiday season (from 10 July until 3 September) it drops down to daily flights on weekdays. Flybe’s published weekly capacity is 14% down on last summer, while Aurigny is offering 30% fewer seats during the peak week under analysis.

Several airlines have ceased operating scheduled services from Southampton since last summer. These include bmi regional, which discontinued its link to Munich, and Volotea, which had been offering seat only services to Ibiza and Palma de Mallorca. The Spanish LCC still operates to these destinations from Southampton in S18, but under a charter arrangement on behalf of TUI, which in the case of Palma de Mallorca, is flown at a reduced frequency compared to its previous scheduled services. Eastern Airways’ capacity, which was operated under its own brand until October 2017 now comes under the Flybe banner. Despite these losses the airport also welcomed a significant new operator in late 2017, with easyJet introducing a three times weekly service to Geneva which runs during the peak ski season.

OAG data shows that Southampton saw scheduled services to 41 destinations over the course of 2017. During the week commencing 31 July there will be flights available to 32 destinations, including nine domestic links and 23 international connections. Domestic services will account for 59% of the available one-way seats and 63% of weekly departures. Eight of the top 12 routes from Southampton in peak S18 are domestic. These include links to the three largest Channel Islands. These are British Crown Dependencies, self-governing islands located in the English Channel. Although they are not officially part of the UK, the Civil Aviation Authority (CAA) still classifies them as domestic destinations from the mainland. The biggest destination based on available capacity is Jersey, which will be served by 33 weekly flights offering nearly 2,500 seats. All of these seats will be offered on Flybe branded fights but, 59% of the capacity will be flown on Blue Islands operated services. Southampton is the only airport on the UK mainland to offer a direct link to Alderney. According to OAG schedule data, the number of seats available on Aurigny services to Alderney in 2017 was higher than at any time since 2008. The largest international route in peak S18 is Amsterdam in third position, with the Dutch capital served by Flybe in addition to KLM. 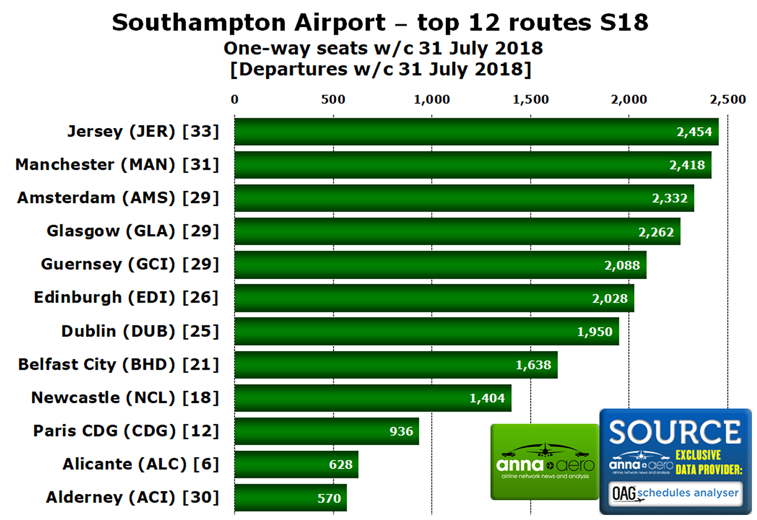 Four of the top 12 routes in peak S18 (Dublin, Alicante, Belfast City and Guernsey) have seen an increase in capacity compared to S17. The largest increase has come on flights to the Irish capital with one-way seat numbers increasing by 19%. Paris CDG was the only top-ranked route to see the same number of seats as last year, with the other seven destinations witnessing a decline in seat numbers. The biggest cuts have come on services to Edinburgh, with Flybe offering one-third fewer seats during the week commencing 31 July than in peak S17, having removed 13 weekly flights from the schedule. Six direct routes have been dropped as scheduled services since S17. These are Aberdeen, East Midlands, Exeter, Ibiza, Lyon and Munich. There has been a recent addition to the departure board which does not register with OAG schedules, since it is a charter operation. FlyLolo, a virtual carrier which uses other airline’s capacity, launched services from Southampton to Skiathos on 3 July. The seasonal service will operate weekly on Tuesdays until 2 October, using a Flybe E195.

CAA terminal traffic data for the first five months of 2018 shows that Southampton had welcomed 763,000 passengers by the end of May, 0.27% behind 2017 figures for the same period. Weekly scheduled capacity for peak S18 is down 19% compared to the equivalent period in S17, suggesting it is possible that the airport could end up seeing a fall in overall traffic this year. Despite this, there are positive signs for future growth, with easyJet confirming its return on the Geneva route for the W18/19 ski season and FlyLolo stating its intention to offer up to 14 destinations to the Eastern Mediterranean next year. 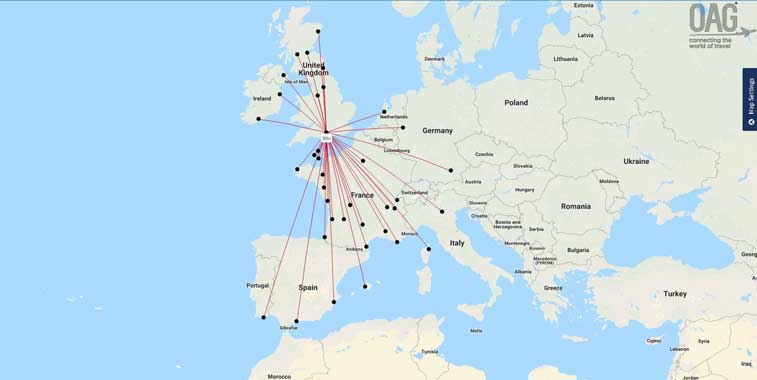 Southampton saw scheduled services to 41 destinations over the course of 2017 and will serve 32 during peak S18. Domestic services have historically accounted for the majority of the airport’s traffic although international passenger numbers are increasing at a faster rate. Domestic traffic accounted for 61% of passengers in 2008 but this had fallen to 59% by 2017. The airport’s largest international country market is France, with direct connections available to 14 French airports in S18.