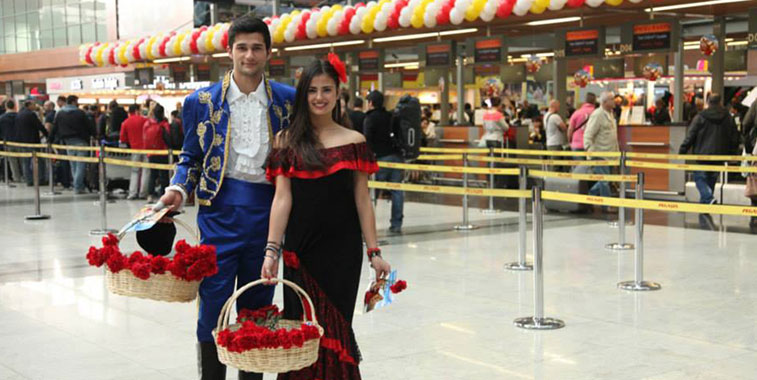 The Spain – Turkey market is relatively small compared to other intra-European country pairs, with 1.51 million seats available between the two countries in 2017. New route launches have been few and far between in this market in recent years. Turkish operator Pegasus Airlines was one of only two carriers to operate between Spain and its home country in 2017. One of the two routes it offered in the market last year was Istanbul Sabiha Gökçen to Madrid, a link launched with ceremonial Spanish music and dancing in March 2014.

There were only 450,000 seats available between Spain and Turkey in 2008, but the next seven years saw consistent, back-to-back annual growth. Unlike some country pairs, the market does not appear to have suffered any adverse effects from the global economic downturn, with seat numbers increasing in 2009. From 2008 to 2015, capacity more than trebled, growing by 263% to 1.64 million seats. During this period the highest annual increases occurred in 2009 and 2014, with seat numbers up by 38% in both years. The lowest increase was 2.7% in 2012. The average year-on-year growth rate from 2008 to 2015 was 21%. However, the market stalled in 2016 with a marginal reduction in seats, before more significant cuts last year. This resulted in capacity falling by 7.8% from 2015 to 2017. 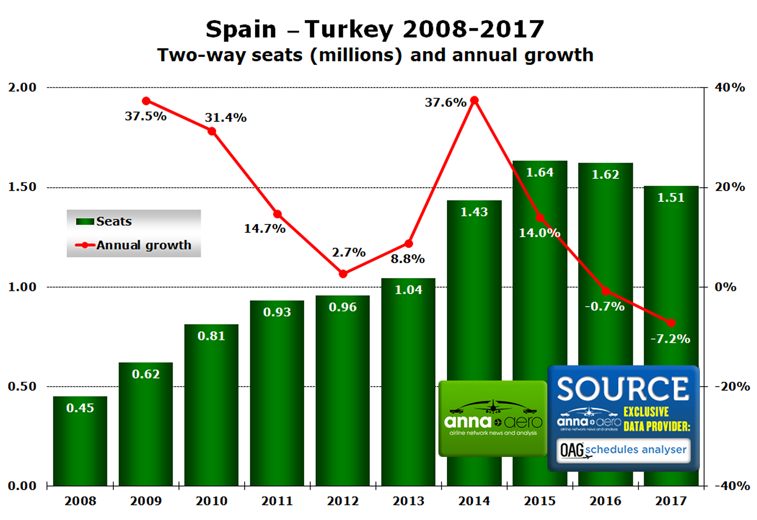 The average capacity on departing flights between Spain and Turkey has increased from 150 seats in 2008 to 194 in 2017. This is partly due to an increase in wide-body operations. Although narrow-body aircraft provided 69% of all capacity in this country pair in 2017, this has fallen from 100% in 2008. The capacity offered on wide-body aircraft has increased from 1.0% in 2012 to 31% in 2017. This is due to Turkish Airlines increasing its use of wide body aircraft in this market between 2008 and 2017. It used A330-200s and A330-300s alongside narrow body aircraft on its links from Istanbul Atatürk to Barcelona and Madrid last year.

Only two airlines offered scheduled services in the Spain – Turkey market in 2017: Turkish Airlines and Pegasus Airlines. Iberia was the last Spanish carrier to serve the market, before it withdrew services between Madrid and Atatürk in 2016.

Seven airports offered scheduled flights between Spain and Turkey in 2017. Five of these were in Spain with two in Turkey. Both of the Turkish airports serve Istanbul, leaving few direct options for Spanish travellers keen to explore Turkey. This analysis considers there to be two main hub airports in each country: Barcelona and Madrid in Spain and Atatürk and Istanbul Sabiha Gökçen in Turkey. This means that only three non-hub airports – all in Spain – offered seats in this market in 2017. The big hubs occupied the top four spots in the airport rankings and accounted for 90% of all departing seats between Spain and Turkey last year. All seven airport pairs in the market featured one of the four mega hubs as the origin or destination. The highest-ranked non-hub airport was Malaga, which was linked to Atatürk by Turkish Airlines. The largest single airport in the market based on departing seats is Atatürk, which offered flights to five Spanish destinations in 2017, with the biggest route being its connection to Barcelona. 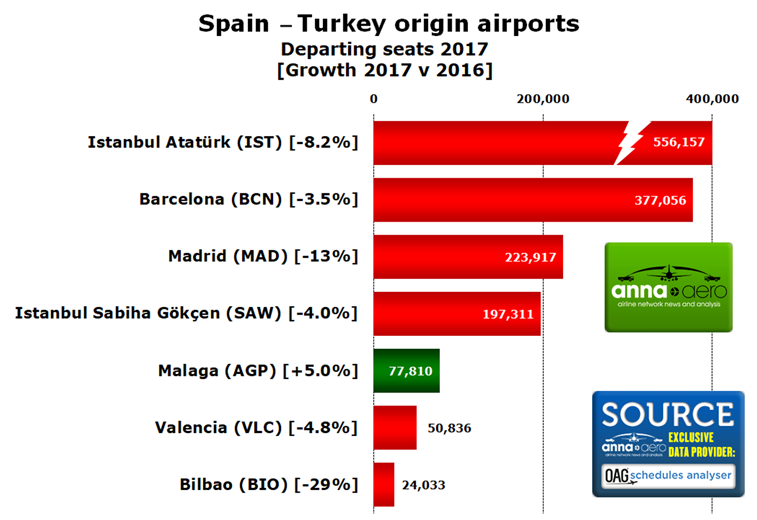 Malaga was the only airport to see an increase in capacity in the Spain – Turkey market in 2017. The other six departure points (highlighted in red), all witnessed a reduction in departing seats last year. The biggest cuts came at Bilbao (29% down) and Madrid (13% down). Six of the seven airport pairs in the market saw a reduction in seats from 2016 to 2017, while a link between Sabiha Gökçen and Ibiza was discontinued by Borajet in 2016.

The Spain – Turkey market is more dominated by its four designated mega hubs than any of the other 10 European country pairs anna.aero has analysed over the same period. There were no flights at all from non-hub airports in 2008 or 2009, and by 2017 they still only accounted for 10% of the departing seats in the market. There were 450,000 seats available from the four hubs in 2008 and this had increased by 201% to 1.35 million last year. In contrast, there were about 152,000 seats available from non-hub facilities in Spain to the two Istanbul airports in 2017. Significantly, there were no opportunities for point-to-point connections between non-hub airports between Spain and Turkey. 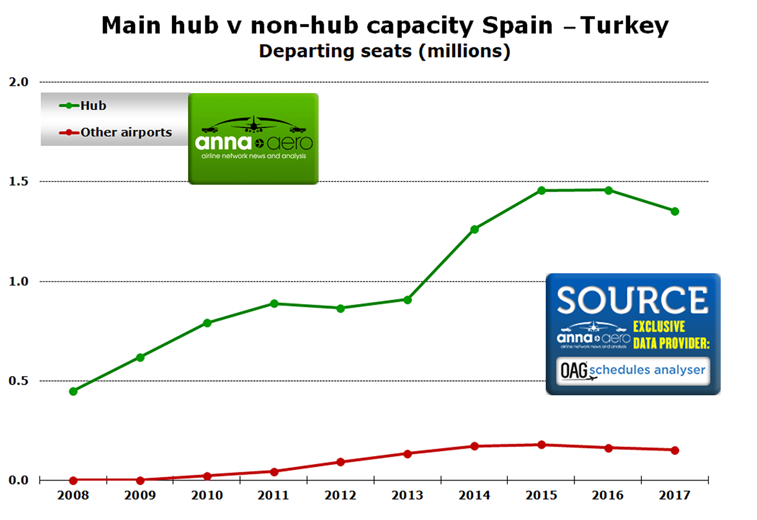 Return to growth on the cards

The capacity data already loaded in OAG for 2018 suggests that the Spain – Turkey market is set for a return to growth this year. It is possible that more capacity will yet be loaded, but at this stage existing schedules show the market is set to grow by 7.9% to 1.63 million seats. There is no suggestion from the schedules that there will be new entrant airlines or routes, with the biggest factor in the predicted growth coming from an increase in seats on the Atatürk – Madrid route by Turkish Airlines. 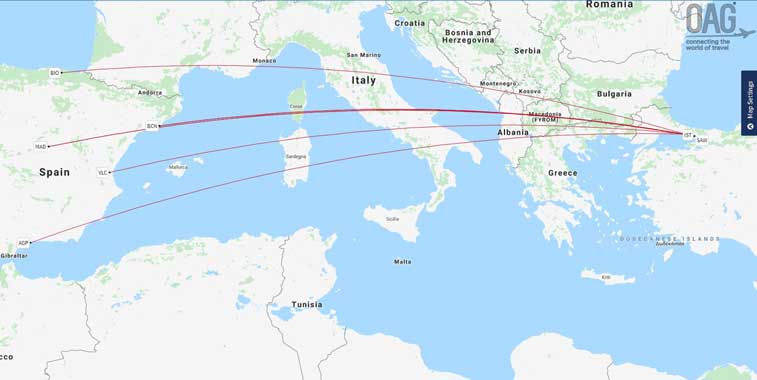 The route map for flights between Spain and Turkey in 2017 emphasises the limited direct destinations available for outbound Spanish travellers, with only two airports in Turkey offering scheduled flights, and both of those serving Istanbul. The four mega hubs in this market accounted for 90% of the available departing seats last year.