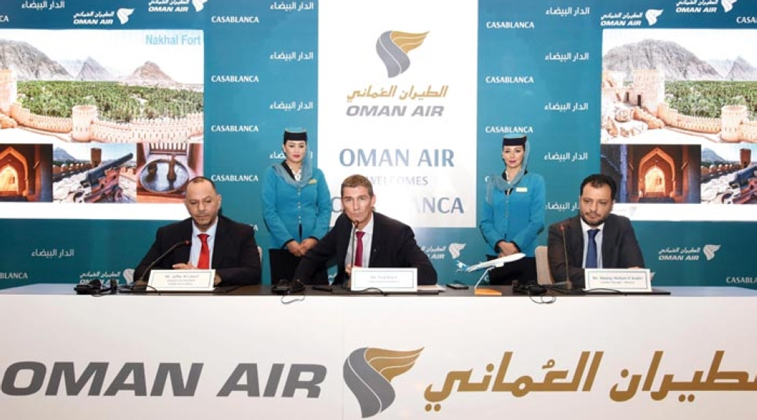 Oman Air is one of four new airlines to fly to Morocco in S18, with the others being Gulf Air, Air Europa and Air Malta. Pictured at the Oman Air inaugural flight to Casablanca on 1 July were: Jaffar Al Lawati, Regional Manager – Gulf, Middle East and Africa, Oman Air; Paul Starrs, CCO, Oman Air; and Moulay Hicham El Kadiri, Country Manager Morocco, Oman Air. Passenger numbers from the African nation have boomed in recent years, with H1 2018 traffic up 13%, while overall numbers for last year grew by nearly 12%, allowing the 20 million passenger barrier to be broken.

Situated in North Africa, Morocco is home to around 35.7 million people based on latest estimates, with the nation seeing GDP grow by roughly 3.8% last year according to World Bank. With regards to aviation, Morocco is Africa’s third largest market when looking at seat capacity, with 13.40 million departing seats having been offered in 2017. This places Morocco behind South Africa (29.80 million departing seats in 2017) and Egypt (18.35 million), but ahead of Algeria (10.41 million) and Nigeria (9.65 million).

In 2017 Morocco’s airports processed 20.36 million passengers, the first time in recent history that the 20 million total has been broken, a result of passenger traffic climbing by nearly 12% last year. This is the best result recorded for a traffic increase during period analysed, with the average growth between 2010 and 2016 having been 3.0%. In terms of total passengers last year, just under 90% flew on international services, the same market share achieved in 2016, 2015 and 2014, showing that international and domestic sectors are growing at similar rates. It should be noted that last year was the first in recent history to see the domestic market handle two million passengers within a calendar year. However, with the Kenitra–Tangier high-speed rail line expected to see its first services by the end of the year, it will be interesting to see how this impacts domestic growth in the future. 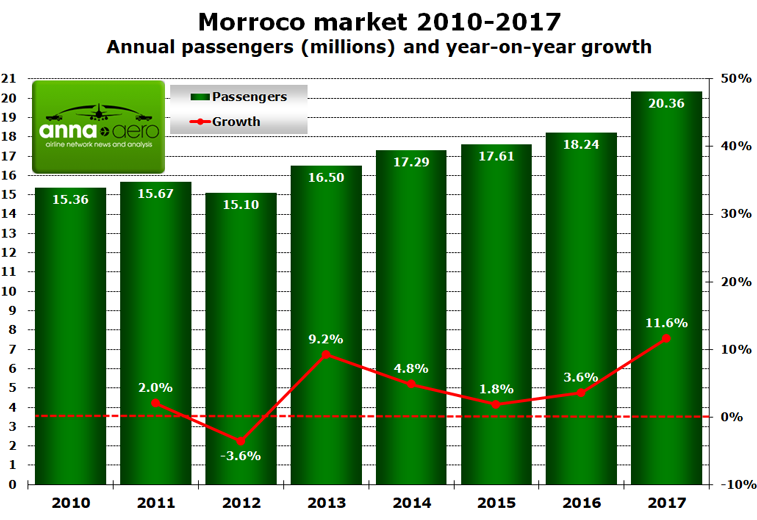 Europe is by far the leading market for Moroccan passengers, with 69% of travellers flying on services to the continent in 2017. Last year there were scheduled services to 25 European nations from Morocco, and given its heritage and cultural links, it is not surprising to see that France is the leader of these nations, with it accounting for 40% of European seat capacity. Interestingly four of the five leading routes from Morocco in 2017 involved either Paris’ CDG or Orly airports according to the Office National Des Aéroports (ONDA), with the top connection being between Casablanca and the latter French capital airport, handling 670,925 passengers, up 3.7% versus the level it carried in 2016. Spain is Morocco’s second largest European market, with it holding a 13% market share of seats, while Belgium is the third biggest with a 8.9% share of the European sector. Following Europe, and excluding the domestic sector, the next largest international market is the Middle East, with these services accounting for 7.7% of traffic in 2017, while Africa is third largest occupying 6.4% of passengers.

Casablanca is top airport as Marrakech and Agadir grow fast

Handling just under 9.36 million passengers last year, Casablanca is Morocco’s leading airport, with it responsible for processing 46% of the nation’s traffic in 2017. For the first six months of 2018, Casablanca handled just below 4.50 million passengers according to data from ONDA, representing a 5.7% increase over the same period of 2017. However, among the five airports in the country which handled more than one million passengers last year, Casablanca reported the slowest growth rate for H1 2018, with the winner being Agadir (+29%), the third busiest airport in Morocco. One of the main factors contributing to this growth is due to Air Arabia Maroc’s expansion from its coastal resort hub at the start of W17/18, with the carrier now having a year-round based A320 offering eight routes, while Birmingham and a domestic link to Rabat will be added from this coming winter season. 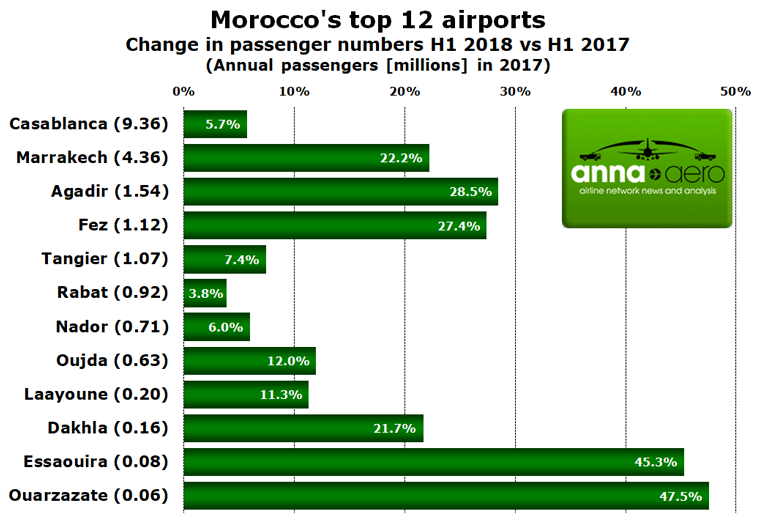 Two airports which are certainly showing traffic surges, albeit from a relatively low passenger number base, are Essaouira and Ouarzazate, airports which this winter will join Ryanair’s network (more detail below). Last year Ouarzazate greeted TUI Airlines Belgium’s new service from Brussels Charleroi, a route that operates inbound via Essaouira, with the two Moroccan airports being 300 kilometres away from each other. Essaouira also saw another new service in 2017, with easyJet launching a seasonal route from Lyon.

Ryanair is reporting an increase in capacity from Morocco in S18 of nearly 18%, while the nation’s leading carrier, Royal Air Maroc, is posting a 1.4% cut in capacity. Despite this result, the national carrier will still have an operation from Morocco that is 230% larger than Ryanair’s with regards to seat capacity this summer, however this has fallen from a figure of 294% in S17. The Irish airline will further enhance its Moroccan coverage later this year when it adds flights from Madrid to Ouarzazate and Weeze to Essaouira on 30 October, with the two Moroccan airports being new additions to the carrier’s route map. The result of these launches means that Ryanair will serve nine airports in Morocco this winter with 241 weekly departures.

In 2008, low-cost carriers had a 20% market share of all seat capacity in the Moroccan market. Fast forward to this year, and this share has risen to 38%, with the number of low-cost seats on offer from the nation growing by 228% from 1.69 million one-way seats in 2008 to 5.55 million this year. With this capacity jump, it’s not surprising to see that five of the nation’s top 12 airlines are LCCs. 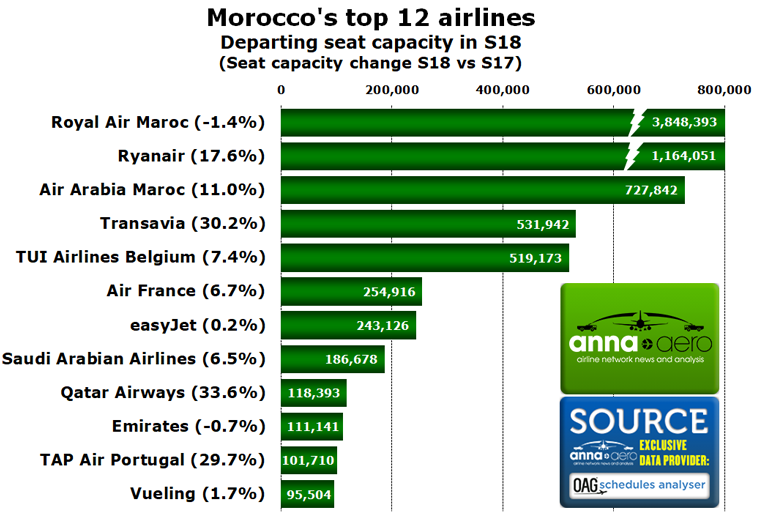 This summer season there are four new airlines flying in the skies above Morocco, with Oman Air (Muscat to Casablanca – launched 1 July), Gulf Air (Bahrain to Casablanca – 11 June), Air Europa (Madrid to Marrakech – 6 December 2017) and Air Malta (Malta to Casablanca – 26 March) all introducing flights within the past 12 months. Interestingly, the only carriers which have left the market have been those that are unfortunately no longer flying, namely airberlin, NIKI (Laudamotion launches flights to Marrakech in October) and Thomas Cook Airlines Belgium. 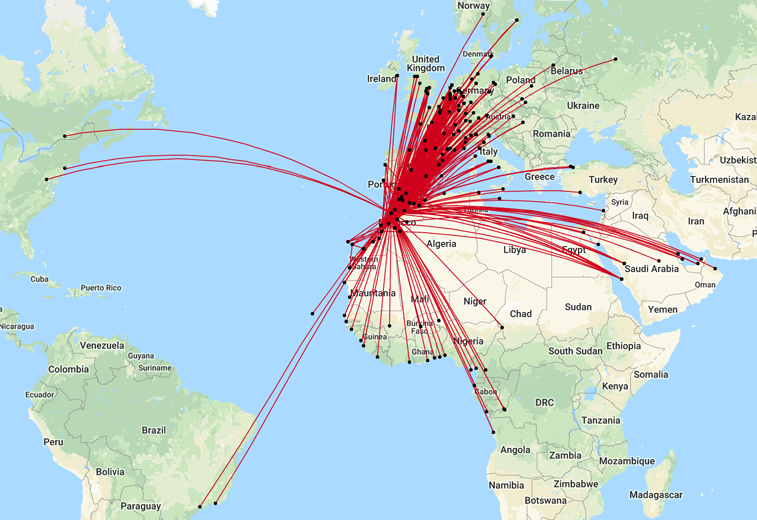 This route map visually shows the significance of Belgium, French and Spanish markets to Morocco, with the three combined occupying 62% of all European seats last year. The map also shows the importance of links to Middle East, the second largest international market after Europe, accounting for 7.7% of Moroccan traffic in 2017.