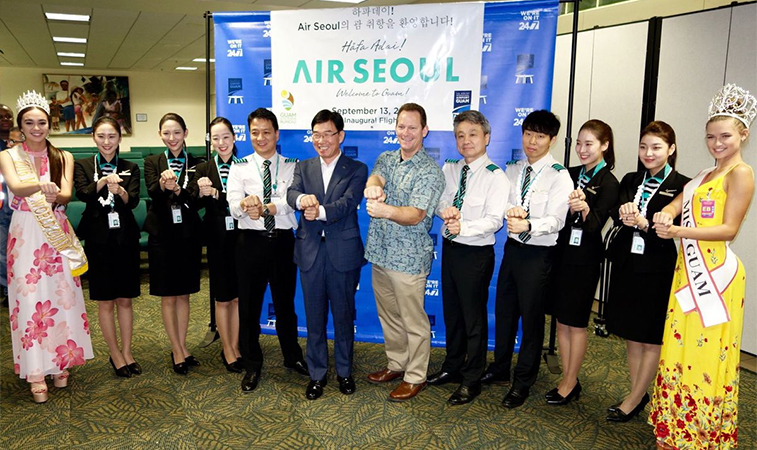 Air Seoul will offer 43,900 seats weekly seats across its network this summer, up 132% on the equivalent period in S17. According to anna.aero’s New Routes Database, the carrier has has launched seven new routes since last summer, including this one from Seoul Incheon to Guam. Celebrating the launch on September 13 2017 at the latter airport with the crew, plus Miss World Guam 2016, Phoebe Denight Palisoc and Miss Earth Guam, Emma Mae Sheedy, were Ryu Kwang-Hee, President and CEO of Air Seoul and Ray Tenorio, Lieutenant Governor of Guam.

Air Seoul is a South Korean LCC and a subsidiary of full-service operator Asiana. It began operations in 2016 and its main base is Seoul Incheon. According to ch-aviation, the Korean carrier currently operates a fleet of six A321s. During the week commencing 30 July 2018, Air Seoul will offer 43,900 seats across its network, up 132% on the equivalent period last summer.

Seoul Incheon is currently Air Seoul’s only operating airport in its home market. All of its published capacity during the week commencing 30 July will be flown on international links from the hub, accounting for 50% of the carrier’s weekly departing seats. Half of its top 12 destinations from Incheon in S18 are in Japan. The largest single route is the link to Osaka Kansai, with it accounting for 22% of the carrier’s departing weekly capacity in S18. 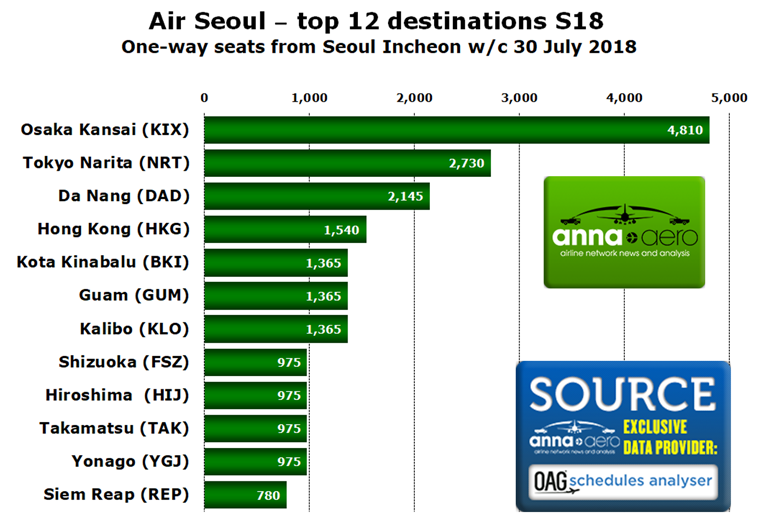 Half of Air Seoul’s top 12 routes for S18 were introduced after the peak of the S17 season. These include the top four links to Osaka Kansai, Tokyo Narita, Da Nang and Hong Kong, plus Guam and Kalibo. Of the six other routes that were operated last summer, Kota Kinabalu, Hiroshima and Takamatsu have been maintained at exactly the same capacity while Siem Reap and Shizuoka have experienced cuts in one-way seat capacity of 43% and 17% respectively. The only route in the top 12 which was served last summer and has seen an increase in capacity is Yonago, with seat numbers on the Japanese link up by two-thirds.

Sunday is busiest day of the week

Air Seoul will operate to 16 destinations in total from Incheon during the week commencing 30 July. Five of these routes are also flown by parent airline Asiana, including the four largest links in the LCC’s network, plus Sapporo Chitose. Air Seoul will serve seven international country markets from its home base this summer, with Japan by far the largest of these in terms of available capacity. Japan is the only country in which the LCC serves more than one destination. It will fly to 10 Japanese airports in peak S18 with these services accounting for 61% of the airline’s total weekly capacity from Incheon.

Sunday is the busiest day of the week in the Air Seoul network this summer with 17 daily departures from its main base. Tuesdays, Wednesdays and Fridays are the quietest days in the schedule with 15 flights, while the remaining days seeing 16 departures. Only three routes are served with higher than daily frequencies. Kansai is operated three or four times daily, Narita twice-daily and Da Nang 11 times weekly with double-daily flights on Mondays, Wednesdays, Fridays and Saturdays. A further four routes are served by daily flights: Hong Kong, Kota Kinabalu, Guam and Kalibo. The remaining nine connections are served by five weekly flights or less, as shown in the table below.

The longest sector in the Air Seoul network is the 3,658-kilometre connection to Kota Kinabalu, while the shortest is the 594-kilometre link to Nagasaki. The mean average sector length across the network is 1,701 kilometres, with the weekly frequencies of services varying from two to 23 across the 16 routes.

According to anna.aero’s New Routes Database, Air Seoul has launched seven new routes since last summer, including two in 2018. It is scheduled to commence another connection before the end of the year when it adds its 11th Japanese destination. Flights to Fukuoka are due to begin on 27 August and will initially operate six times weekly, before the service increases to daily rotations from late September. 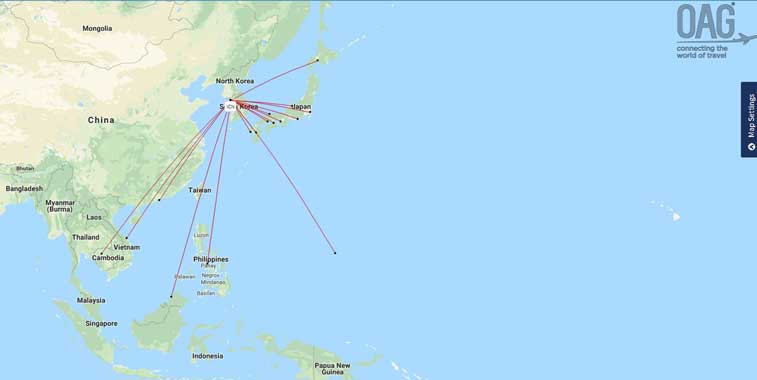 All of Air Seoul’s scheduled services in peak S18 are operated on international links. Japan is by far the airline’s largest market accounting for 61% of its departing weekly seats from Seoul Incheon. The LCC currently serves 10 Japanese destinations, but will add another to its route map from 27 August when it introduces flights to Fukuoka.