Detroit-Dublin is “Skyscanner Unserved Route of the Week” with over 21,000 searches; Aer Lingus’ 13th US route?? 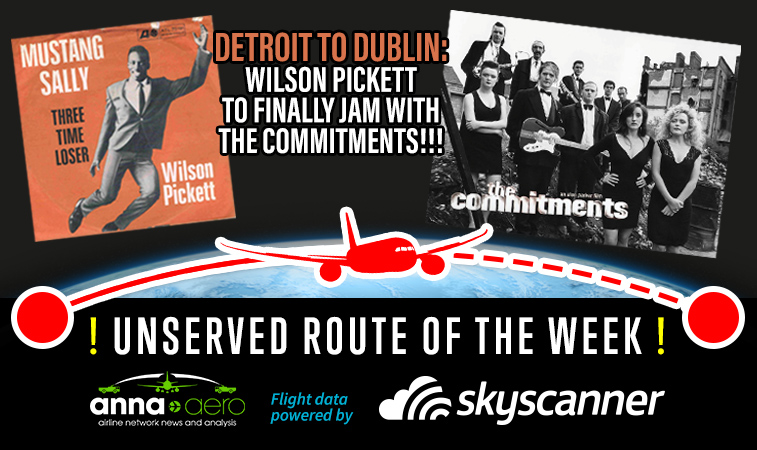 In the 1991 movie The Commitments, Motown’s Wilson Pickett was meant to jam with the Dublin band The Commitments – but they fail to get together – presumably as there was no direct air service between the two cities. Our anna.aero data elves have no doubt that Mustang Sally was one of over 21,000 travellers last year that was desperate to ride on a new service from Detroit to Dublin. If Aer Lingus starts a sector to Detroit as its 13th US destination, then Wilson may finally get to jam with Irish soul outfit (in spirit at least – as Pickett died in 2006).

With over 21,000 searches in the last 12 months, a potential city pair from Detroit to Dublin has been identified as this week’s “Skyscanner-anna.aero Unserved Route of the Week” – a powerful analysis based on aspirational data captured from the Skyscanner.net flight comparison site used by +70 million unique visitors per month. “Fortunately there has been some interest in Detroit-Dublin, hopefully it’s getting closer to being served,” said Joe Cambron, Director of Air Service Development for Detroit Airport. 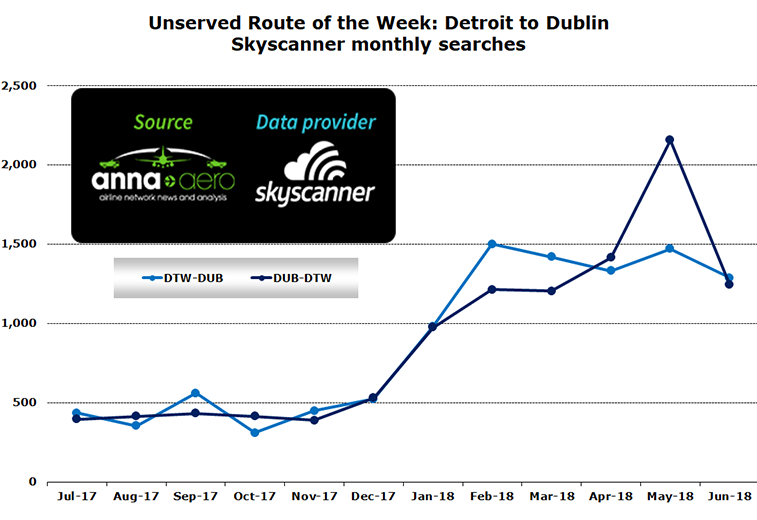 anna.aero thinks Aer Lingus or Delta Air Lines should delve into this sector

Skyscanner demand on this week’s unserved route shows a slight preference towards the Irish end of the city pair, with a near 50/50 split, so on this basis we looked at potential carriers at the Dublin origin first. According to OAG schedules for the week commencing 30 July, the largest carrier at Dublin is Ryanair (37% share of weekly seats). While Europe’s biggest airline has often talked the talk about launching transatlantic services, it is yet to walk the walk on what would be a seismic shift in the airline’s strategy. That said, who would have thought five years ago that the ULCC would be actively courting business passengers, basing aircraft at Frankfurt, allowing staff to be members of unions and showing a fluffier, warmer side to its formerly aggressive public relations stance. Additionally, if Ryanair was going to consider flights to the US, Dublin, its spiritual home and second-largest base (behind London Stansted), would be a likely starting point for such operations. Whether Detroit would be high on that list of potential sectors is unlikely, but it might well be on the long list of new routes to be considered.

Aer Lingus is the second-largest carrier (36% share of weekly seats) at the Irish gateway, presently offering 81 non-stop destinations. 13 of these are found within North America, 12 in the US and one in Canada. Expansion in the US market is core element of the IAG-owned carrier’s network development strategy, with a service to Philadelphia added in April this year, and a Seattle-Tacoma route started in May. With Aer Lingus yet to make any announcements on any new US destinations for S19, and with this compelling Skyscanner data now in evidence, Detroit would appear to offer the best opportunity for the carrier if it is looking to add North American destination #14.

Contemplating the US end of the route, Detroit’s leading capacity provider of its current 14 serving airlines is Delta Air Lines, which offers 73% of the airport’s weekly seats. The USB3 carrier presently flies to 133 destinations from the Michigan city, and already has a robust European offering – serving Amsterdam (27 times weekly), Paris CDG (three times daily), Frankfurt (double-daily), London Heathrow (10 times weekly), Rome Fiumicino, Munich (both daily) and Reykjavik/Keflavik (four times weekly) – but no point in Ireland. It is no stranger to the Dublin market however, flying daily services from its Atlanta, Boston and New York JFK hubs. As Detroit is currently the SkyTeam carrier’s third largest transatlantic operation, behind JFK and its Georgia home, a service to Dublin could therefore be very much on the cards, especially given Delta’s strength in the Irish market.

When looking at the previous year of search data (graph above), the busiest month (from Detroit) is February 2018, with over 1,500 searches. On this basis the anticipated booking profile of the route has been allocated as long-haul leisure, resulting in around 60% of travellers on this potential sector wanting to book between seven to four months before departure. This would seem to indicate that the busiest months for traffic will be between June and September. Using the same methodology for the Dublin end of the sector, the peak months for traffic will be between September and December.

According to OAG Traffic Analyser, because there is no direct service, the top three connecting options chosen by those passengers who did book travel between Detroit and Dublin in the last 12 months (year ending May 2018) indicates that the majority of connecting travellers used New York Newark (17%), Chicago O’Hare (15%) and Amsterdam (10%). Looking at traffic flows in the opposite direction, Boston (23%) was the #1 option selected by Irish outbound passengers to Detroit, followed by Newark (14%) and O’Hare (13%). 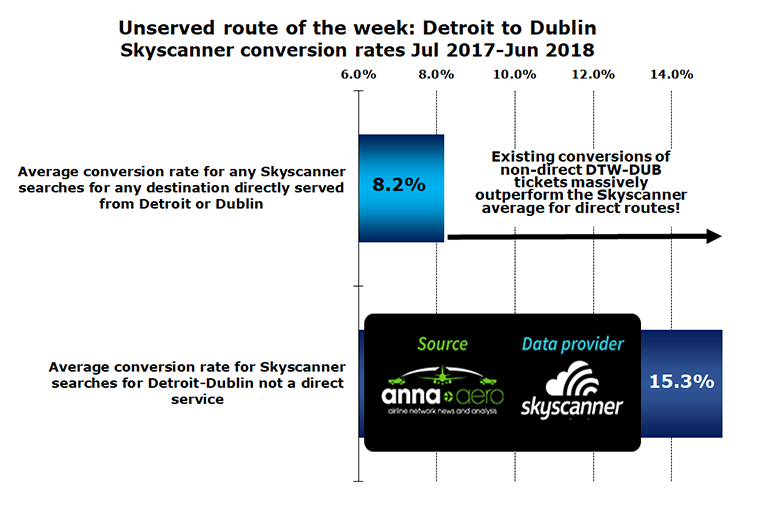 With a lack of direct services, travellers between these two cities have clearly become used to these one-stop alternatives. However, the market demand is extremely buoyant – as the graph above shows, with 15.3% of the Skyscanner searches for these indirect Detroit to Dublin services converted into ticket sales – that’s more than the average 8.2% achieved for Skyscanner conversion rates for all direct routes available from either Detroit or Dublin. However, with over 21,000 annual searches in the last year, and with the sector being operated by an appropriately-sized aircraft for the type of route, a three or four times weekly service should be immediately viable for the airline choosing to start this potential city pair. “Dublin has become a bit of a hive of new transcontinental services as the next generation twin-engine aircraft proliferate and we hope to make the list,” concludes Cambron.