Toulouse Airport welcomed 9.26 million passengers in 2017; easyJet is the top carrier this summer, while Paris is the leading destination 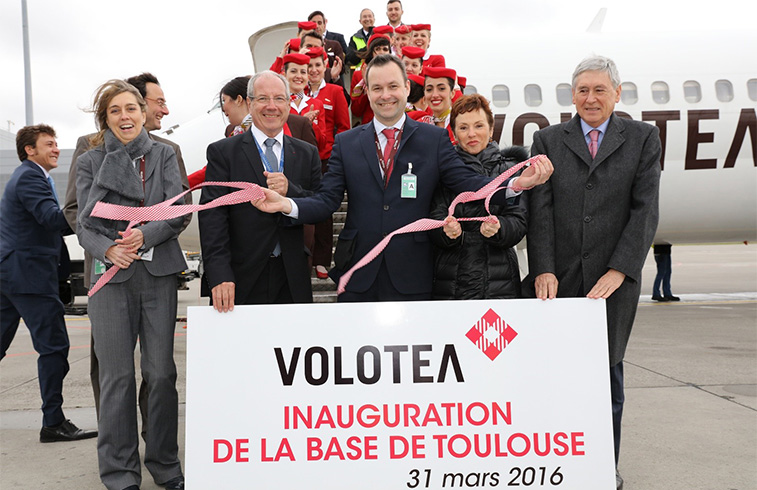 Toulouse Airport welcomed 9.26 million passengers last year, 15% up on 2016 levels. The French facility has seen a number of significant developments in terms of serving airlines in recent years, with Volotea opening a base in 2016, and Ryanair commencing services during the same year. The largest operators in S18 are easyJet and Air France.

Toulouse Airport, located in Southern France, has become synonymous with the aerospace industry as the home to aircraft manufacturing giants Airbus and ATR. In recent years it has been making a name for itself for its growing list of air services. According to statistics from Union des Aéroports Français, Toulouse was the fifth largest commercial airport in France based on passenger numbers in 2017, behind the two main Paris airports of CDG and Orly, as well as Nice and Lyon, but ahead of Marseille.

Toulouse handled 6.41 million annual passengers in 2010, with this number growing to 9.26 million in 2017, representing a 45% increase the number of people processed. There has only been one year-on-year reduction in passenger numbers during this period, with that occurring in 2014. From 2010 to 2013 the Southern French facility enjoyed three consecutive years of growth, with traffic levels increasing by 18% over this period. A marginal decline followed, before a further three years of growth saw passenger numbers jump up 23% between 2014 and 2017. The biggest single year-on-year increase during the period from 2010 to 2017 took place in the latter year when traffic levels rose by just under 15%. 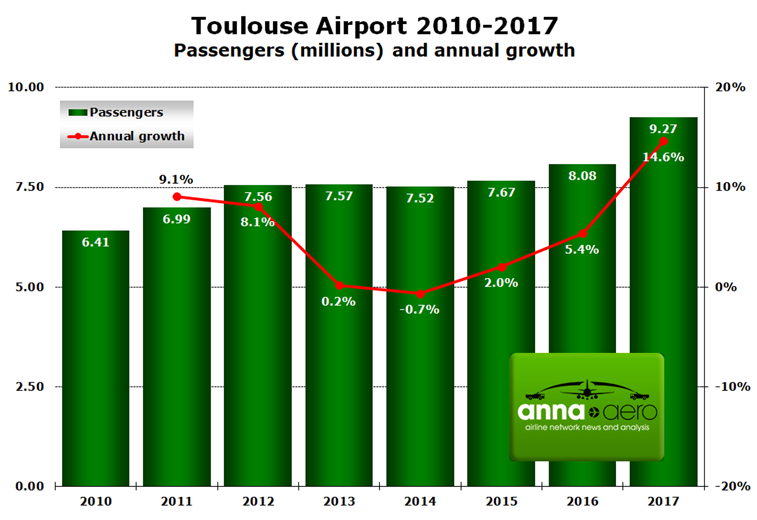 An analysis of the previous ten full years of schedule data reveals that international capacity has been growing at a much stronger rate than domestic seats from Toulouse. There were 2.68 million departing seats available on domestic services in 2008, and this rose to 3.18 million by 2017, representing an increase of 16%. In contrast, 1.39 million one-way international seats were available in 2008 and this grew by 117% to 3.12 million last year. As a result, international services now represent about half of all departing seats from Toulouse, having accounted for little more than one-third of the airport’s capacity in 2008. 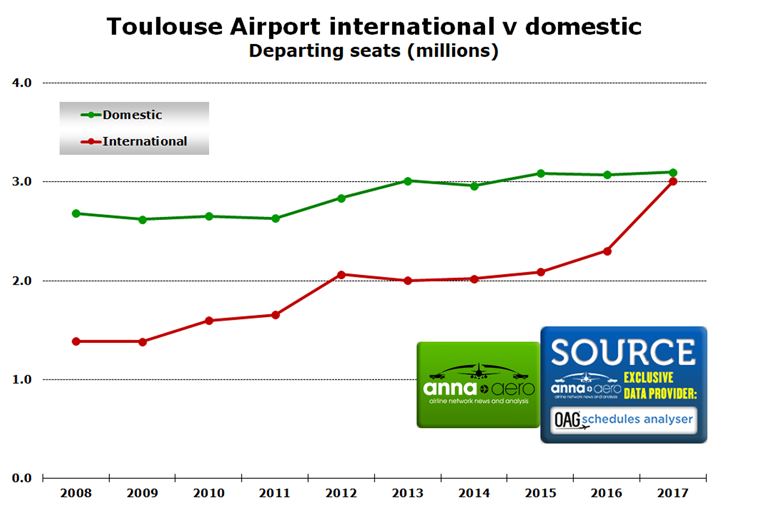 Toulouse has seen a number of significant airline developments in recent years, specifically in the low-cost sector, with Ryanair starting services in late 2016 and Volotea, which has served the airport since 2013, opening a base there in March 2016. According to OAG data, 29 different operators will offer at least one scheduled service from the French airport during the week commencing 7 August. Three of the top 12 carrier’s in peak S18 are LCC or ULCCs. These low-cost operators are all in the top four. The remaining top-ranked airlines include eight full-service operators and one regional carrier. Only two of the top 12 airlines are French. Of the remainder, seven only link Toulouse to their home countries, but the three low-cost airlines all operate international services under seventh freedom rights, that is they fly direct international links from the French airport that have no connection to their own home countries. easyJet and Volotea also operate French domestic services under ninth freedom rights.

easyJet is the biggest operator at Toulouse in S18, based on published capacity for the week commencing 7 August. The UK-based LCC will account for 23% of the airport’s weekly departing seats in peak S18, and will offer 147 weekly departures to 27 destinations combined. This includes 19 international and eight domestic routes. If the capacity of French flag carrier Air France and its regional subsidiary HOP! is combined, this would make for the biggest single operation at Toulouse, accounting for 27,000 one-way seats, or 26% of the airport’s capacity. 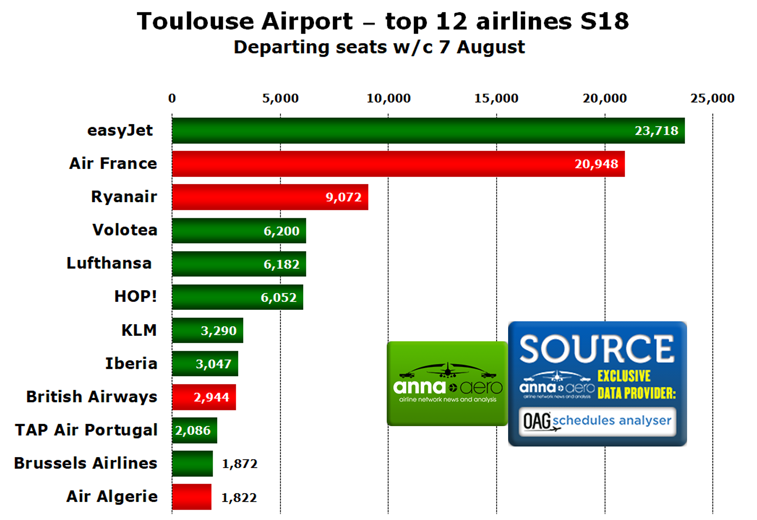 Eight of the top 12 airlines have increased their weekly capacity for peak S18, compared to the equivalent period last summer. The strongest growth has come from Iberia (85% more seats), which has increased its link to Madrid from 18 weekly flights to four daily services. Four of the top-ranked carriers (highlighted in red) have cut capacity for S18, with the largest reduction coming from British Airways (17% fewer seats). The top three carriers maintain the same ranking positions they occupied in peak S17. The only addition to the top 12 is Iberia which replaces TUI Airlines Belgium.

OAG Schedules show that Toulouse will serve 81 direct destinations during the week commencing 7 August. This is six more than it offered during the equivalent period last year. It will provide 17 domestic and 64 international links during a typical week in peak S18. Five of the top 12 routes serve just two cities, with two links to Paris and three serving London airports. In total, one quarter of the top 12 routes are domestic. The top-ranked routes include links to five European capital cities: Paris, London, Amsterdam, Madrid and Rome. The biggest single connection is to Paris Orly, with 83 weekly flights available to the French capital’s second largest airport in peak S18. This includes 73 rotations from Air France and 10 by easyJet. The busiest day of the week on this route is Friday, with 14 flights in total, including 12 Air France frequencies and two from easyJet. The two airlines’ combined daily rotations vary from 10 to 14 across the week. 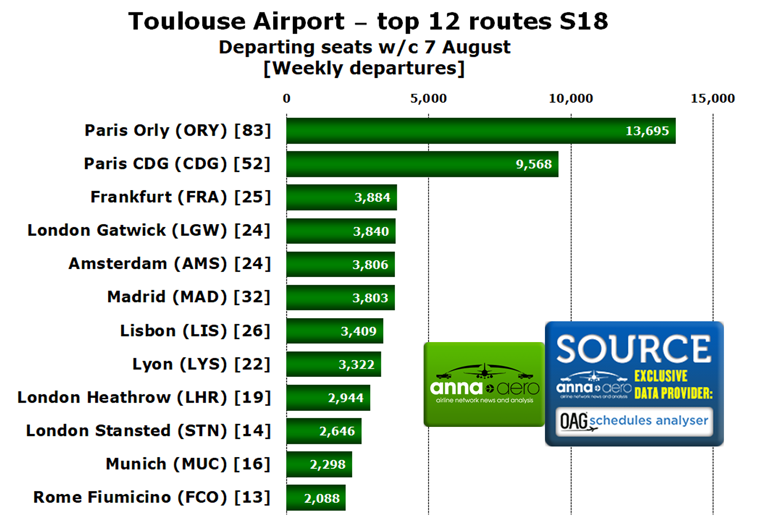 Five of the top 12 routes have seen an increase in capacity for peak S18 compared to the equivalent period last year. These are Frankfurt, Amsterdam, Lisbon, Lyon and Rome Fiumicino. The strongest growth has come on the Lyon (28% more seats) and Frankfurt (25% more seats) links respectively. London Stansted is the only topped-ranked route that will see exactly the same capacity as last summer, with the Orly, CDG, London Gatwick, Madrid, London Heathrow and Munich connections all witnessing a reduction in seats. The biggest cuts have come on the Munich link, with departing seat numbers down 23%. Compared to peak S17, the schedule for this summer will see 11 new destinations, including a weekly flight to St Denis de la Reunion with XL Airways France and six combined weekly services to Caen, with HOP! and Volotea both serving the domestic link. Four routes have been dropped since peak S17, with the highest frequency casualty being Flybe’s service to Birmingham, which had been operating with a daily rotation.

According to anna.aero’s New Routes Database, seven new services have already been launched to or from Toulouse in 2018. At least one more new connection will be added before the end of the year, with easyJet scheduled to commence a four times weekly service from Liverpool at the start of W18/19. 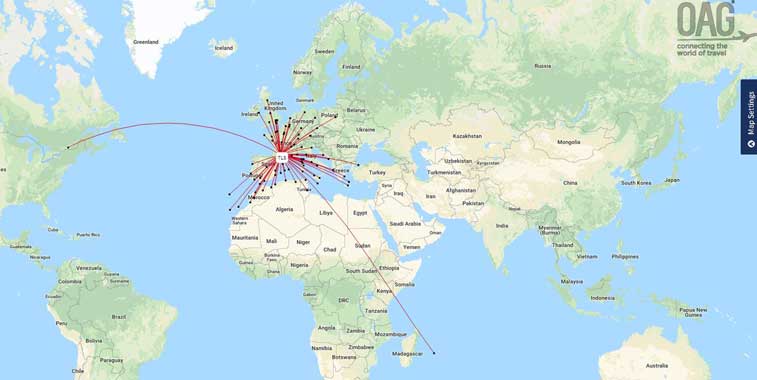 There will be scheduled flights to 81 destinations from Toulouse during the week commencing 7 August. International capacity has been growing faster than domestic seats and now accounts for 50% of the airport’s departing seats. The UK is the largest international market from Toulouse in peak S18, with scheduled services available to seven British airports.