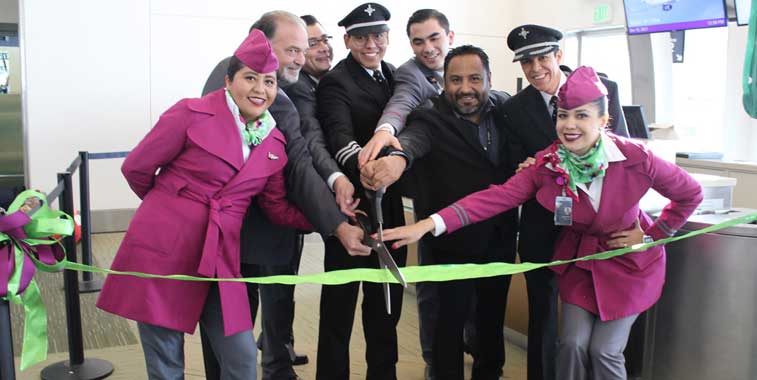 Mexican airports welcomed 136.69 passengers in 2017, up 8.5% compared to the previous year and an increase of 57% since 2008. International passengers grew from 29.69 million to 46.73 million during this period. LCC Volaris, the second biggest airline in Mexico last year according to available capacity, launched a new international link on 18 December 2017 when it began a Californian connection to San Jose from Zacatecas.

Data from Mexico’s Directorate General of Civil Aeronautics (Direccion General de Aeronáutica Civil –  DGAC) shows that the country’s airports handled 89.62 million passengers in 2008, with this having increased by 57% to 136.69 million last year. There was only one year-on-year decline in traffic over this period, and that occurred at the height of the global economic recession, with passenger numbers falling by 14% in 2009. Since then the Mexican market has enjoyed eight consecutive years of growth, with passenger numbers increasing by 81% from 2009 to 2017. The biggest single annual increase during this period occurred in 2015, with traffic up 13% that year. The average annual growth rate was 7.7%. Domestic passengers accounted for two thirds of Mexican airport traffic in 2008 and still maintained this market share in 2017. It should be noted that the DGAC data counts both arriving and departing passengers in an airport’s traffic figures. This means that, for a one-way sector, domestic passengers will register twice, being recorded at both departure and arrival airport.

International traffic on the rise 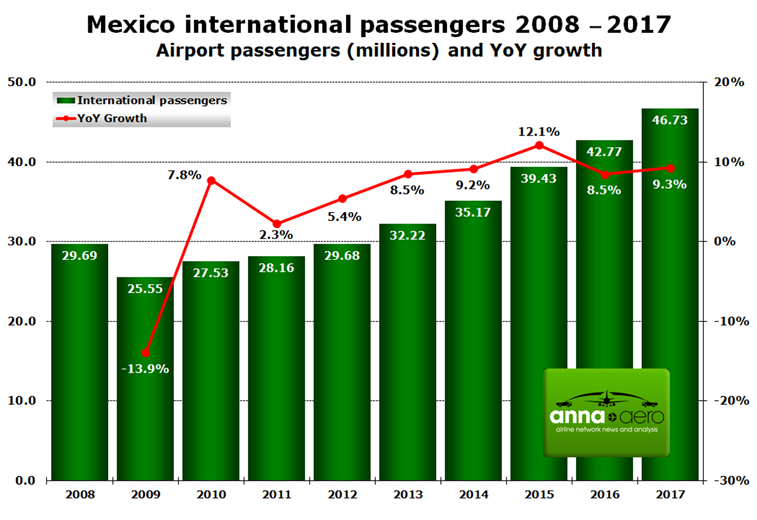 The strongest growth among the most significant and established international routes from Mexico (classified here as those with a minimum of 100,000 one-way seats in 2016) last year, came on the connection from San José del Cabo to Los Angeles. The Californian connection saw a 67% boost in one-way capacity in 2017, with more than 440,000 seats being made available. This increase was largely due to Southwest Airlines operating on the airport pair for a full year, having only introduced this link to its network in December 2016.

Domestic connections accounted for 57.58 million airport passengers in Mexico in 2008 and by 2017 this had increased by 56% to 89.96 million. The domestic market experienced two consecutive years of cuts in 2009 and 2010 with passenger numbers dropping by 14% from 2008 to 2010. Since then there has been seven consecutive years of growth with traffic increasing by 81% from 2010 to 2017. During this period the strongest annual increase in domestic passengers occurred in 2015, when there was a 13% boost in internal travellers. The average annual increase from 2010 to 2017 was 8.9%. 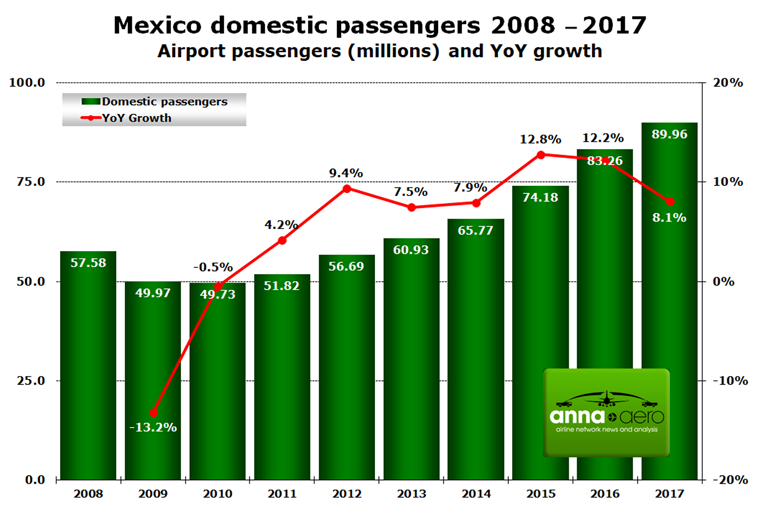 The link between Culiacan and Guadalajara was the fastest growing of the most significant and established domestic airport pairs (classified here as those with a minimum of 100,000 one-way seats in 2016) last year. This route enjoyed a 50% increase in one-way capacity in 2017, due to an increase in seat numbers from VivaAerobus and Volaris, plus the introduction of flights from Interjet and Aeromar respectively.

There were 47 airports in Mexico with 100,000 passengers or more in 2017, the same number number as in 2016. Of the 47 airports with at least 100,000 passengers in 2016, 35 witnessed an increase in traffic last year. The strongest growth came at Puebla and Chetumal, with traffic up by one-third and 31% respectively in 2017. Puebla enjoyed a boost in LCC domestic capacity from both Volaris and VivaAerobus, which helped push passenger numbers beyond 500,000 last year. The largest Mexican airport to feature in the top 12 growth rankings was Guadalajara in 12th position. It welcomed 12.78 million passenger last year following a 12% increase in traffic. 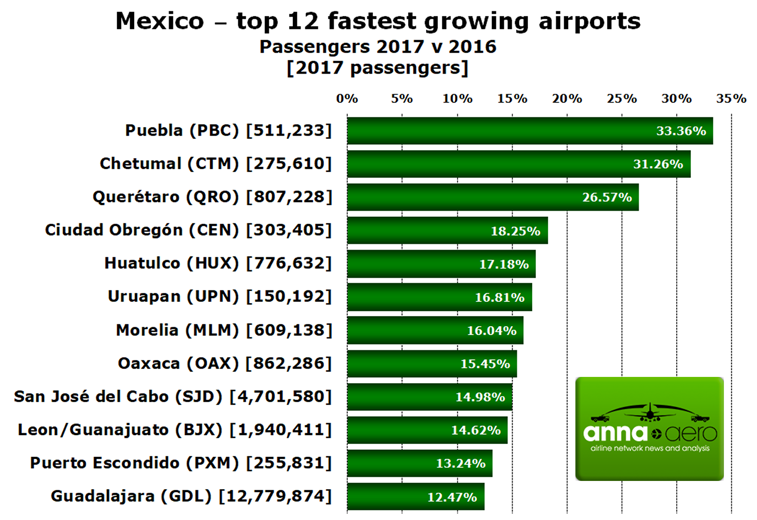 Source: DGAC Mexico. Only includes airports with minimum of 100,000 passengers in 2016.

There were 12 airports in Mexico with some form of traffic in 2016, but fewer than 100,000 passengers. Among these facilities the strongest growth in 2017 came at Loreto, where passenger numbers grew by 17% to 85,000. OAG data indicate that this was due to the introduction of four domestic services by Calafia Airlines, plus an increase in capacity by Alaska Airlines on its service to Los Angeles.

Schedules show that Mexico was linked to 35 international country markets in 2017, although some of these were served by few or irregular flights. The largest market by far was the US, which has long dominated international departures from Mexico. Available one-way capacity from Mexico to the US increased by 48% from 2008 to 2017, growing from 12.74 million seats to 18.86 million. However, the share of Mexico’s total international capacity represented by US flights dropped from 77% to 67% during this period. In total 19 international markets were served by a minimum of 100,000 one-way seats in 2017. The fastest growing of the most significant and established international country links (classified here as those with a minimum of 100,000 one-way seats in 2016) was Costa Rica, which enjoyed a 29% boost in seats from Mexico in 2017 compared to 2016 numbers. The top three strongest growth markets last year were near neighbours, all located in Central America. Four of the top 12 growth markets were in Central America, with three in South America, three in Europe and two in North America. The fastest growing international market from Mexico outside of the Americas in 2017 was the Netherlands, which witnessed a 20% increase in one-way seats. This was due to Aeromexico operating its service from Mexico City to Amsterdam year-round for the first time, after introducing the long-haul link in late May 2016. 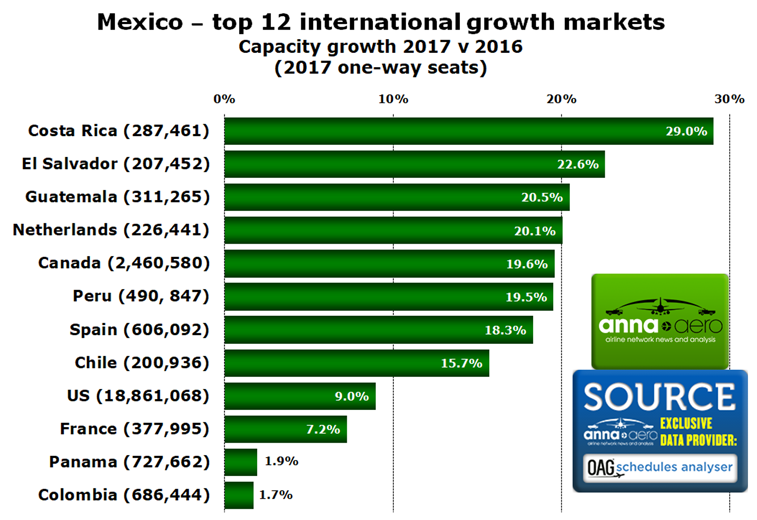 There were also examples of strong growth last year among the country markets served by fewer than 100,000 seats from Mexico in 2016. Japan was the fastest growing international market within this group, seeing a 136% increase in available departing seats from Mexico in 2017. There were nearly 140,000 seats available from Mexico City to Tokyo Narita last year, with Aeromexico increasing its capacity on the route and All Nippon Airways introducing the airport pair to its schedule in February 2017. 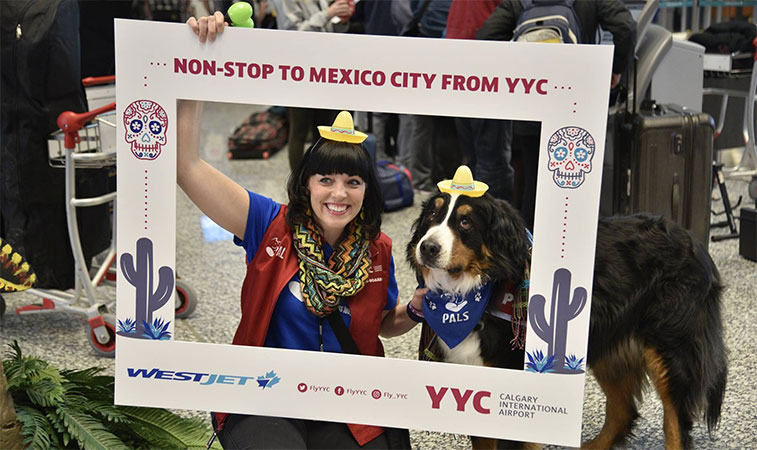 Mexico was linked to 35 international country markets in 2017, with 19 of these seeing a minimum of 100,000 one-way seats. Out of this group, Canada was the fifth fastest growing market, seeing a 20% boost in seat numbers. It was also the second largest international market from Mexico last year. WestJet added more Canadian connections from Mexico City when it launched a four times weekly service from Calgary on 14 March, followed by a three times weekly operation from Vancouver on 15 March.