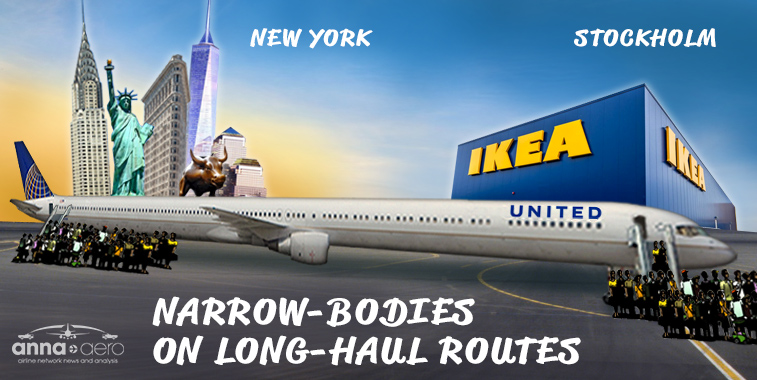 Narrow-body aircraft are usually short- and medium-haul workhorses, but some airlines have seen an opportunity to deploy their single-aisle assets on long-haul sectors. The longest regularly scheduled narrow-body long-haul service in peak S18 is United Airlines’ 6,304-kilometre link from New York Newark to Stockholm Arlanda, which it operates daily with 757-200s. WOW air has occasionally used A321neos on the longer 6,923-kilometre connection between Reykjavik/Keflavik and Los Angeles, but this service is currently flown by the LCC’s A330s.

Narrow-body aircraft might normally be used on short or medium sectors, but some carriers, including LCCs, have also seen an opportunity to deploy their single-aisle assets on long-haul routes. This might be because the lower capacity of these smaller aircraft is better suited to certain long, thin routes, that is, long-distance connections between secondary airports or destinations with less demand, that might not be able to support typical wide-body operations. Narrow-body types might also be used to compliment wide-bodies and help optimise the capacity/frequency mix on services to major hubs. An analysis of narrow-body, long-haul schedule data for a typical peak week in S18 reveals that Copa Airlines will provide the most departing flights by airline and the US the most by country market, while Panama City tops the long-haul, single-aisle airport table. In this analysis, anna.aero has defined a long-haul route as a sector over 4,500 kilometres.

Copa Airlines will operate the most weekly narrow-body long-haul flights in peak S18 based on schedule data for the week commencing 7 August. The Panamanian carrier will offer 127 more departures than second placed United Airlines. There is a strong representation from the Americas among the leading airlines, with five of the top 15 (highlighted in red) based in that region, including the top three carriers. Europe is also strongly represented, accounting for six of the top airlines (highlighted in blue) for long-haul single-aisle operations this summer. The remainder of the top 15 includes one operator from Africa (Kenya Airways), two from Asia (Citilink and Air Astana) and one from Russia (S7 Airlines), a country that transcends continental classifications, with OAG listing some of its airports as European and others as Asian. Icelandair is the highest placed airline based outside of the Americas for weekly long-haul narrow-body flights this summer, with it being fourth largest overall.

The countries with the most representatives among the top 15 airlines are the US (three) and Iceland (two). All of the US big three (USB3 – American Airlines, Delta Air Lines, United Airlines) operators feature in the top six, while Icelandair and WOW both make the cut from Iceland. Airlines from the Middle East region are noticeably absent, with none of the Middle East big three (MEB3 – Emirates, Etihad Airways, Qatar Airways) making the top 15. In Emirates’ case this is not surprising, since it only has wide-body aircraft. However both Etihad Airways and Qatar Airways have narrow-body A320 family types in their fleets, but clearly prefer to deploy wide-body aircraft on long-haul sectors. Qatar Airways will only operate 14 weekly long-haul flights on narrow-body aircraft in peak S18, while Etihad won’t use single-aisle types on any long distance services. 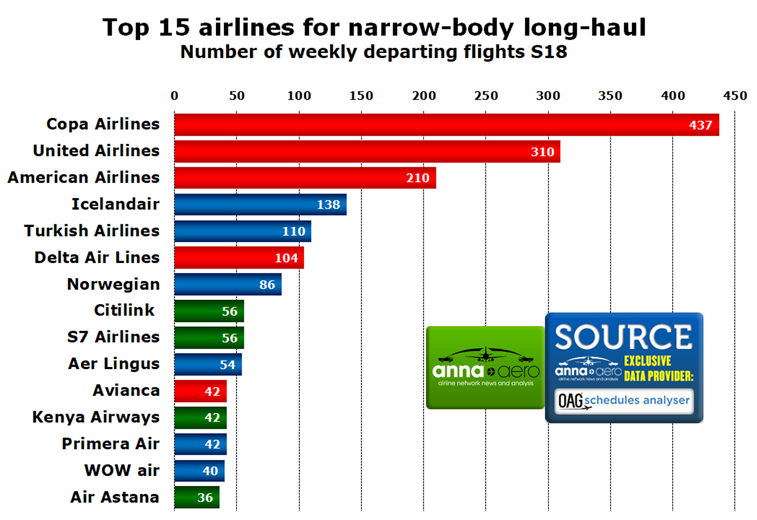 The airlines making up the top 15 would remain relatively unchanged if the rankings were arranged by the available weekly capacity on narrow-body aircraft, rather than the number of flights operated in peak S18. The top four remain the largest narrow-body long-haul carriers based on seat numbers, but Yakutia Airlines would replace Avianca in the top 15 according to this metric.

Copa Airlines uses 737-700s and 737-800s on 16 international links with sector lengths of 4,500 kilometres or longer. These include seven links from Panama to Brazil, four to Argentina, three to the US and one each to Chile and Uruguay respectively. The longest of the 16 routes is the 5,462-kilometre connection from Panama City to Montevideo, while the shortest is the 4,693-kilometre sector from the Panamanian capital to Las Vegas. Copa’s largest single narrow-body long-haul route is the 5,081-kilometre link between Panama City and Sao Paulo Guarulhos, on which it will provide 38 flights in each direction during the week under analysis. This is also the highest-frequency, long-distance, narrow-body sector in the world this summer. Four of the top 15 airlines for long-haul narrow-body links are LCCs: Norwegian, Citilink, Primera Air and WOW air. Norwegian operates the most weekly long-distance, low-cost, single-aisle services in peak S18 with 86 departures, placing it in seventh position in the overall airline rankings. It operates a number of transatlantic routes with 737 MAX 8s from the UK and Ireland to Providence and Stewart in the US. Its busiest transatlantic connection in peak S18 is the link between Dublin and Stewart, which it operates twice-daily.

US has wide narrow-body lead

The US is scheduled to be the top country market for narrow-body long-haul departures in peak S18, offering more than three times as many weekly flights as second placed Panama. The USB3 account for 60% of the country’s 668 weekly long distance departures, with all three carriers operating some transatlantic services with 757s. American and United also operate narrow-bodies on long-haul domestic links, including services to Alaska and Hawaii. The Americas and Europe are the most dominant regions, with six of the top-ranked countries located in the former (highlighted in red) and a further five in the latter (highlighted in blue). The four remaining countries include Russia and three Asia Pacific nations. Many of the Russian departures are on long-haul domestic services within that vast country. The busiest of these, in terms of narrow-body flights, is the 4,727-kilometre Moscow Domodedovo – Chita connection, which will see 19 weekly departures in each direction. 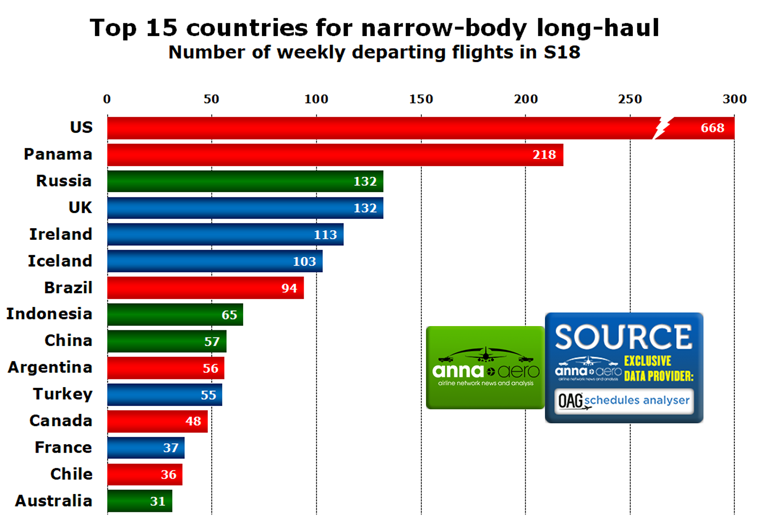 The UK is the highest ranked European nation in joint third. It will see 132 weekly narrow-body long-haul departures in peak S18, mostly to Canada and the US. None of these flights are operated by UK-registered carriers. There are no Middle Eastern or African nations in the top 15. The Middle East nations with the most weekly single-aisle long-distance departures this summer are Bahrain, Qatar and the UAE, with seven each. Kenya is the top African country with 26 weekly departures.

Panama City at the double

Panama City tops the airport rankings for the most narrow-body long-haul departures in peak S18, with more than twice as many flights as second placed Reykjavik/ Keflavik. The Panamanian airport is the hub for Copa, and its various narrow-body links across the Americas region. Nine of the top 15 airports are located in the Americas (highlighted in red) with six of these being in the US, but interestingly, none are in Canada. The busiest US airport for long distance single-aisle flights is New York Newark, with many of these being transtlantic connections to Europe, operated by United 757s. Of the remaining top 15 airports, five are in Europe (highlighted in blue) and one is in Asia Pacific. Reykjavik/ Keflavik is the highest ranked airport outside of the America’s with the Icelandic hub playing host to Icelandair and WOW air flights, with both carriers using their their home airport as the connecting point for services linking Europe with North America. 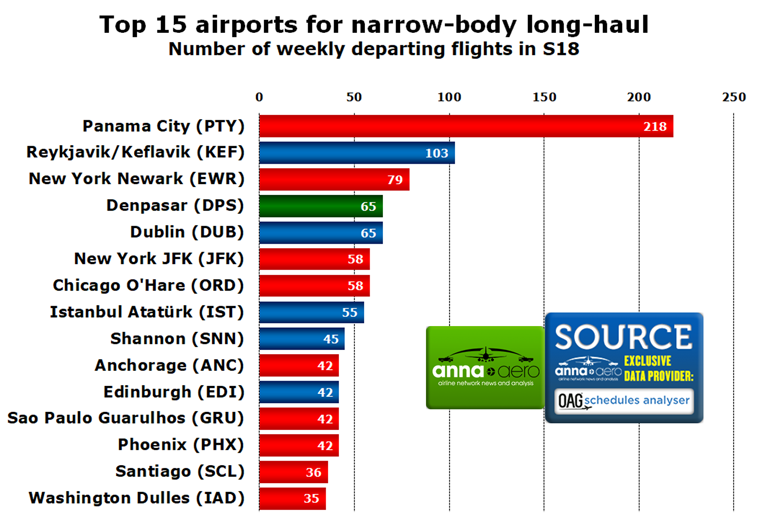 There were no Middle Eastern or African airports in the top 15. The busiest African airport for long-distance narrowbody flights this summer is Ilha do So in Cape Verde with 17 departures, while the busiest facilities in the Middle East are Bahrain, Doha and Dubai Al Maktoum, each with seven weekly departures.

According to OAG schedules, the longest, regularly scheduled, narrow-body operated airport pair in peak S18 is the 6,304-kilometre link between Newark and Stockholm Arlanda which is flown daily by United with 757s. This is followed by the 6,257-kilometre link between Manila and Sydney, operated by Philippine Airlines with A321s.

This analysis is based on a number of assumptions. At anna.aero we traditionally consider long-haul as anything over 4,500 kilometres, so where this article refers to long-haul flights it specifically refers to airport pairs with sector lengths of 4,500 kilometres or more. The data analysed here refers to a typical peak period in S18, in this case the week commencing 7 August. It should be noted that only direct, non-stop flights have been analysed. 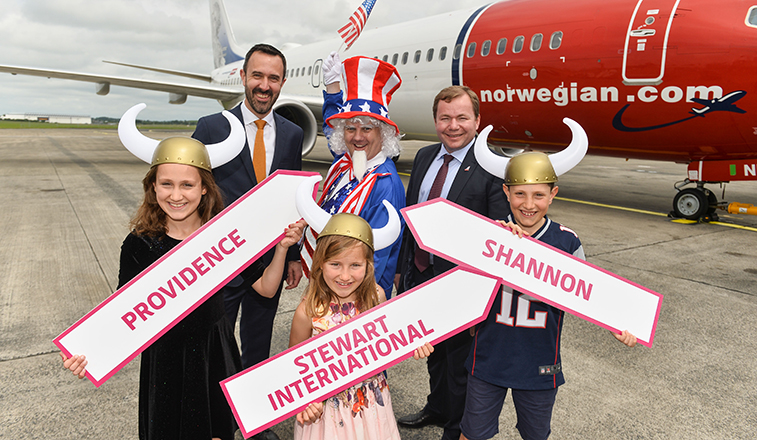 Four of the top 15 airlines offering narrow-body long-haul services in peak S18 are LCCs. Norwegian will operate 86 single-aisle services on sectors of 4,500 kilometres or more this summer. In 2017 it launched a number of transatlantic links to Providence and Stewart in the US from the UK and Ireland. These routes are operated by the airline’s newly acquired 737 MAX 8 aircraft. Shannon celebrated the start of services to both of these US destinations last July.