Salvador Bahia showcases its latest award – the Arch of Triumph 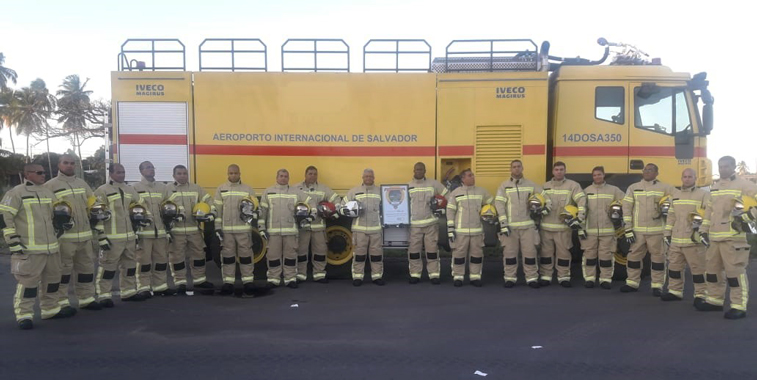 The firefighting team at Salvador Bahia Airport in Brazil proudly displayed its first Arch of Triumph award this week, with the airport claiming the prize for the 36.5/40 score it generated for the water salute that it gave to Copa Airlines’ inaugural service from Panama City. Holding the certificate are Lieutenant Marconi Franco and Sergeant Ailton Viana, Military Firefighters of Bahia. The score allowed the airport to break into the top 10 leaderboard for 2018, placing it ninth, but will anybody be able to challenge Lisbon for the top position before the end of the year?

Salvador Bahia Airport in Brazil celebrated its first Arch of Triumph award this week, taking the prize for its top 10 finish in the 2018 rankings for the brilliant night time salute it gave for Copa Airlines’ inaugural service from Panama City. This week, seven European, one Asian and one US airport have battled it out to see if they can make the top 10 and win the anna.aero Arch of Triumph competition. Of these eight competing airports, five are vying it out by greeting an easyJet inaugural, while the average score of the eight FTWAs is 27.7. So while this is no means a bad result for a weekly win, it’s still not enough to match the 36.5 required to make it onto the top 10 leaderboard. Keep Monitoring!! 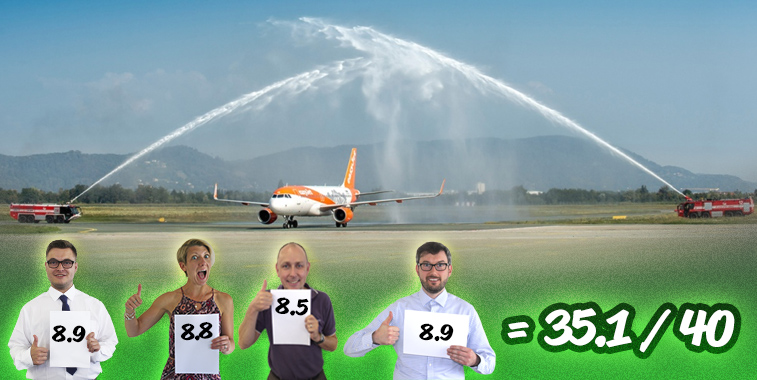 A special livery for an inaugural flight…nice touch from easyJet’s fleet planners!

Judge’s comments: It’s always nice when an airline puts on a special livery aircraft for an inaugural flight, and easyJet has gone for the optimum marketing opportunity here by laying on its Austria-themed livery for the first flight between Berlin Tegel and Graz. A random and fun factoid for those of you who love an avgeek fact, two of anna.aero’s judges flew on this aircraft (registered OE-IVA) from London Gatwick to Madrid on 6 November 2017 to attend the 141st IATA Slots Conference. It is also the first aircraft to be registered with easyJet Europe’s Austrian AOC. 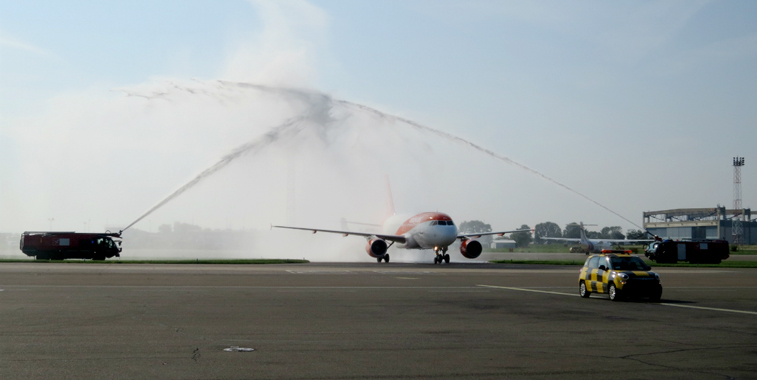 The first of five easyJet water salutes this week.

Judge’s comments: Belgrade was the first to step-up and greet an easyJet inaugural this week, but was the only airport entering the competition with one of the LCC’s route launches, not to greet a service inaugurating from Berlin Tegel. While the fire tender powers look set to the optimum force, it would appear that the firefighters got the angles a tad wrong. The result? An arch that meets over the end of the left wing, and not the middle of the fuselage… 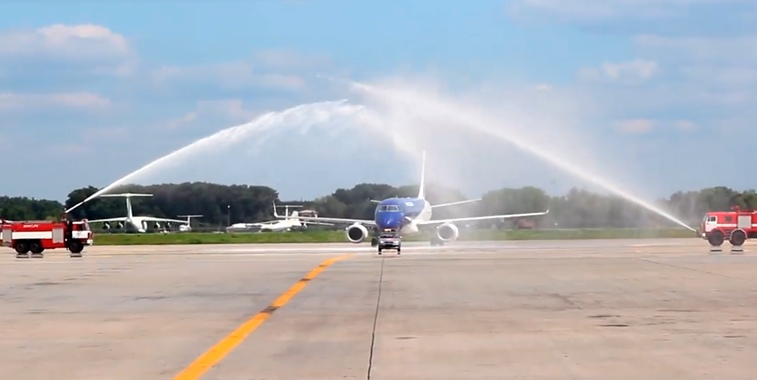 Out with the old, in with the new at Boryspil.

Judge’s comments: We like this arch from Kiev Boryspil, although it is somewhat let down by the lack of identical tenders which have tried their best to get matching water jet flows. However the anna.aero judges cannot help but feel sorry for those poor old aircraft in the distance, unlikely to ever receive a ceremonial baptism, but more likely to see the chop from a boneyard guillotine, hence the photobombing here… 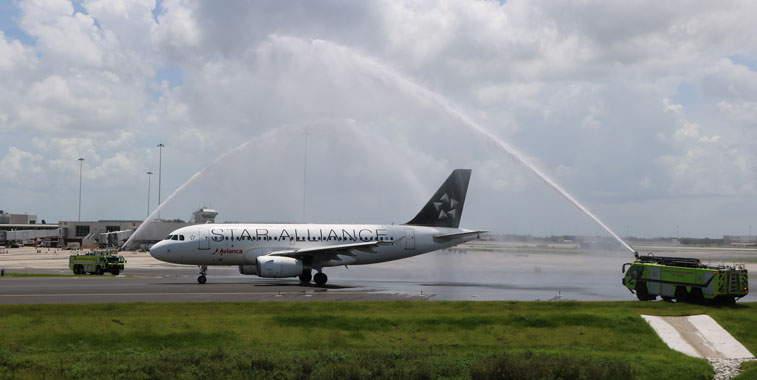 Another special livery for a route inaugural…

Judge’s comments: Like the easyJet service between Berlin Tegel and Graz which was operated on a special livery aircraft, Avianca has attempted the same by inaugurating its route between Lima and Orlando on a Star Alliance-branded A319. While this is a common livery among Star Alliance members around the world, we at anna.aero still appreciate the South American carrier’s inaugural marketing efforts. 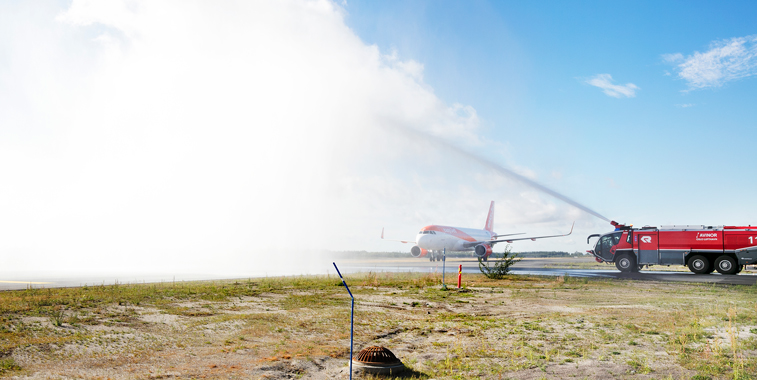 A tender that creates sky!

Judge’s comments: In the many years of the anna.aero Arch of Triumph competition, never have we come across a tender that not only creates water arches, but sky! Did all of the that come from Oslo Gardermoen’s Tender #1? Or is the sheer light from the sun creating this out-of-this-world photo? Either way, we at anna.aero like it a lot! Unfortunately, following the rules, half an arch only means half the score. 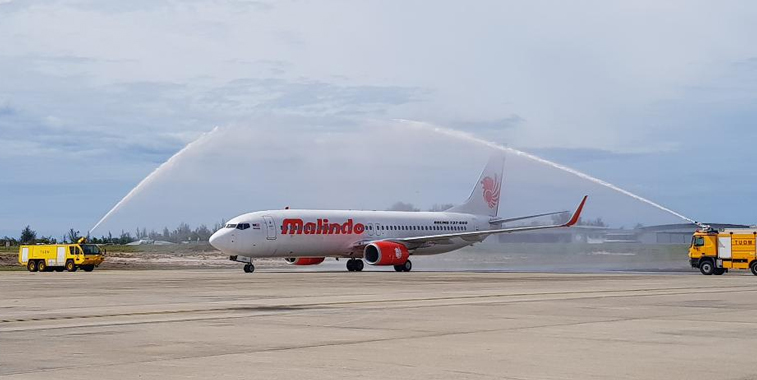 Judge’s comments: Judging by the trajectory of those jets, it would appear that it was not the bad timing of the photographer that has resulted in this gap-shot FTWA, but the fact that the tenders were just a bit too far out to make a well-structured arch. The result leaves enough room for the 737-800 to pass through with only a splashing of water, and not the full baptism drenching that is expected with these route launch marketing features… 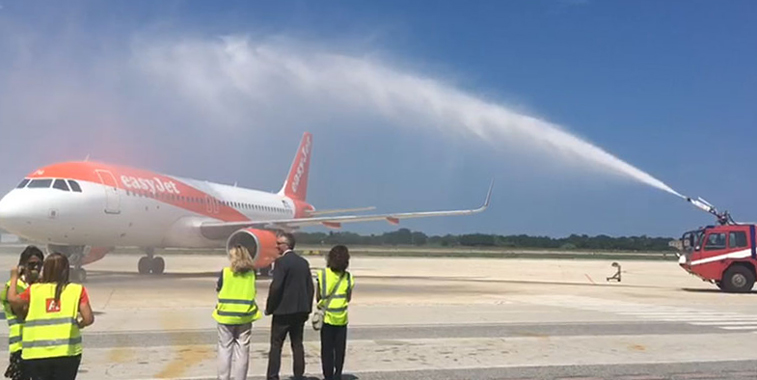 Five onlookers…but only one is focusing on the salute!

Judge’s comments: You turn up to watch a new route inaugural landing and when it comes to the all-important water arch salute, four of the five people who were invited along to watch, don’t even bother to witness the spectacle!!! Two of the VIPs appear to be distracted by something further down the apron while a further two appear to be having a chin wag and catching up about what they did on Thursday night. Luckily this was not Ancona’s finest hour… 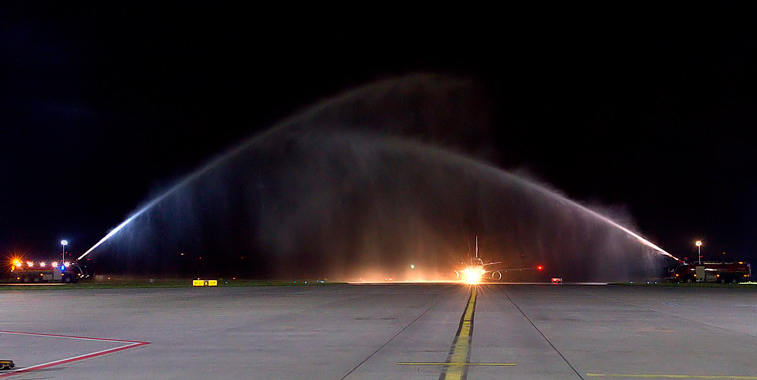 Love the curtain…but why are the tenders so far apart?

Judge’s comments: It’s hard to get that ideal lighting for a night time shot, and it would appear that Bydgoszcz in Poland has managed to get the right location on the airfield to conduct the welcoming ceremony for LOT Polish Airlines’ new service from Kiev Zhulyany. The tenders have even managed to get the ideal water curtain, it’s just a shame they’re so far apart… 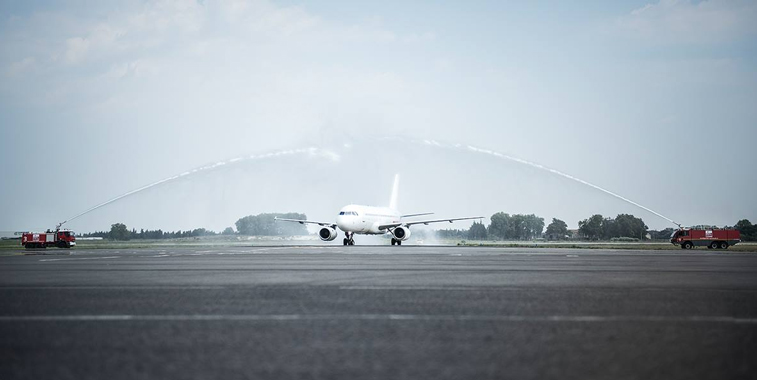 Have Montpellier’s firefighters washed the livery off this A320?

Judge’s comments: What is not visible from this photo is that this leased SmartLynx A320 has a small easyJet logo by the front and rear doors, while a larger one is present at the back, below the last seven cabin windows. However the angle of this shot has resulted in the wing blocking this larger logo out of view. It is a shame the airline could not use one of its own aircraft on the inaugural flight, because if its branding was on show, this FTWA would have scored much higher…