easyJet’s Nice operation doubles in size between 2008 and 2018; has a 27% market share of all seats; Tenerife South next new destination 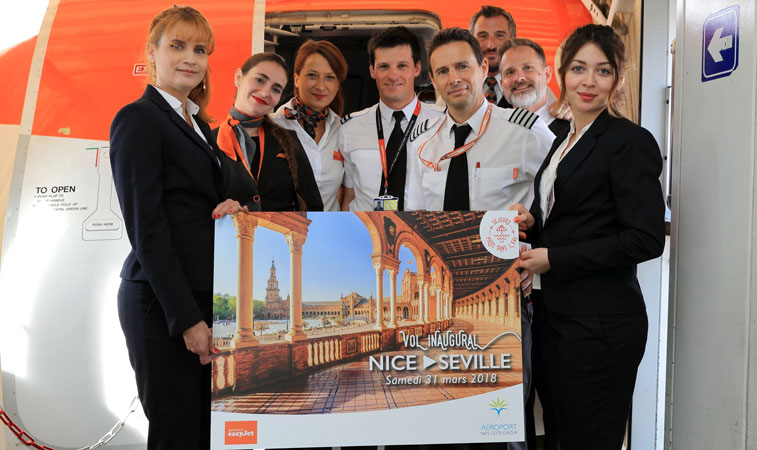 On 31 March easyJet introduced flights between Nice and Seville, one of seven new routes that the carrier will launch from its French Riviera base this year. Along with Seville, flights to Berlin Tegel, Biarritz, Chania, Catania and Tel Aviv have launched, while on 5 September the carrier will begin a twice-weekly service to Tenerife South.

easyJet introduced Nice to its network in 1996, one of the first international destinations that the carrier flew to from its sole base at the time – London Luton. The French airport finally became a base for the carrier at the start of the S12 season, initially with one based aircraft. OAG Schedules Analyser data for the week commencing 14 August suggests that the airline has a minimum of five based A320s at Nice this summer. However, some days require more aircraft, with schedules also showing that some aircraft from other bases do w-pattern rotations through Nice. With 38 destinations being flown to in S18, a 39th – Tenerife South – has its inaugural flight pencilled in for 5 September.

This year easyJet will offer 4.77 million seats from its Nice base, an increase of 8.5% versus its 2017 operation. Since 2008, the carrier has grown its annual seat capacity from the airport by 126%, more than doubling in size during the period analysed. Since opening as an easyJet base in S12, the average year-on-year increase in seat capacity for the carrier from Nice has been 8.6%, with the last few years (2014-2018) showing that the growth rate is starting to accelerate, following on from strong double-digit growth as a result of the first based units. 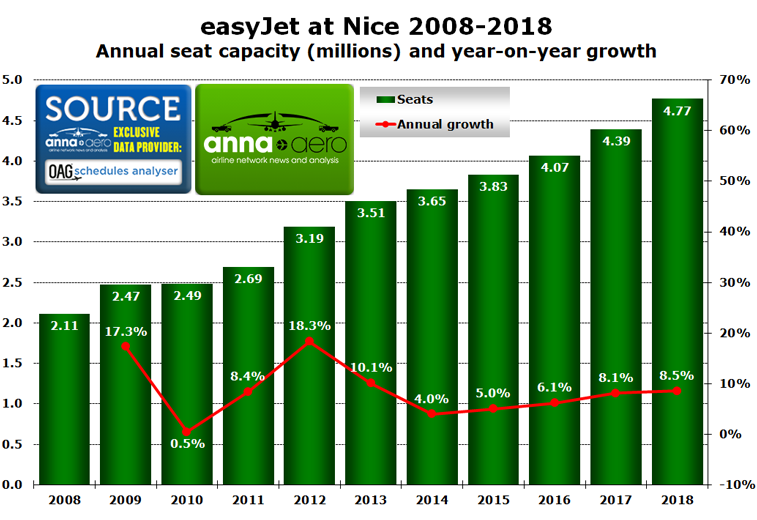 Of all seats being flown by easyJet from Nice in 2018, 39% are scheduled for domestic services, growing from a market share low of 31% in 2009. Of the 38 routes being flown from Nice this summer, seven are to fellow French airports, namely Paris’ CDG and Orly, Biarritz, Bordeaux, Lille, Nantes and Toulouse.

Nice is currently easyJet’s 12th busiest airport operation in terms of annual seats for 2018, with it sitting behind Berlin Schönefeld in 11th, but ahead of Edinburgh in 13th. This was the same position that it held last year, despite the carrier’s sudden surge in capacity from Berlin Tegel, with Edinburgh falling from 11th place in 2017, while Schönefeld was sixth.

In 2008 easyJet held a 15% market share of all seats from Nice. Fast-forward to 2018, and the airline’s market share has increased by 12 percentage points to just over 27%. The carrier is now the largest airline at Nice, overtaking Air France in 2014 to claim the title which easyJet has held every year since. The national flag carrier is second in the rankings for 2018, while regional operator HOP! is fifth behind British Airways and Lufthansa. 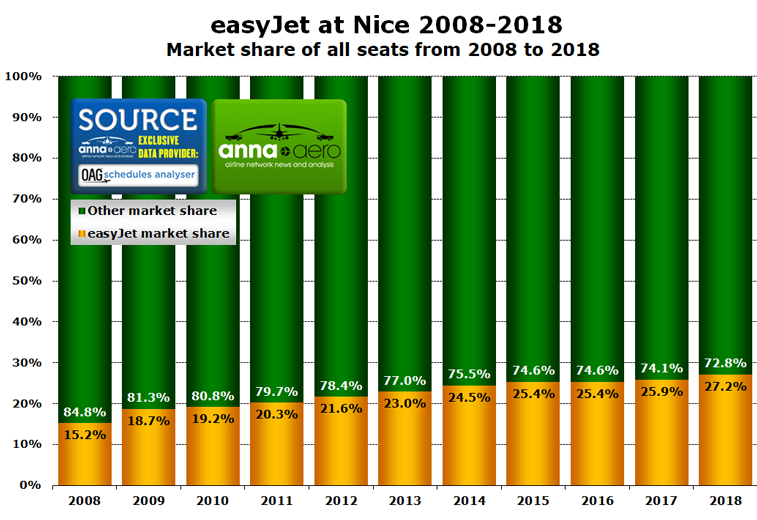 easyJet’s leading route from Nice this summer is London Gatwick, with the LCC offering 38 weekly departures to the UK capital airport. What is interesting to note however, is that although this is the carrier’s top destination from Nice, not one rotation is flown on a French-based unit during the week analysed. Of the top 12 routes, seven (highlighted in light green) are to airports in either France or Switzerland. The only domestic destinations not in the top 12 are Toulouse (flown four times weekly in S18) and Biarritz (twice-weekly). 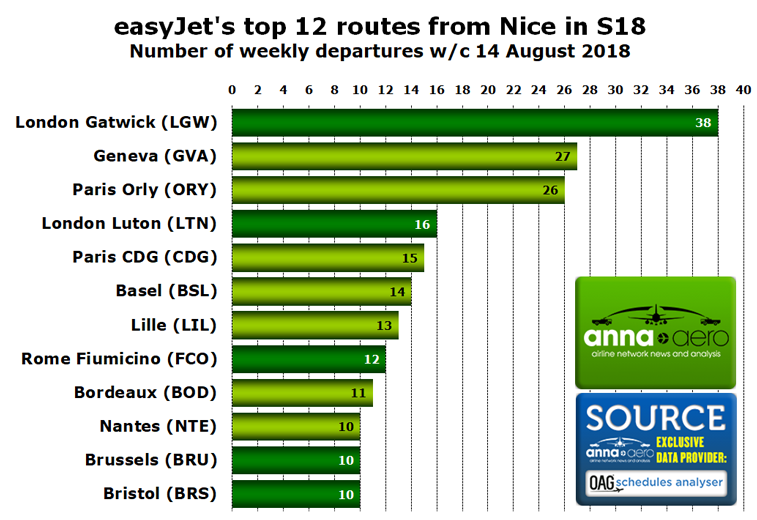 Just missing out on a top 12 place are Liverpool and Berlin Schönefeld, with both served nine times weekly during the week analysed. Of the 26 routes outside the top 12 that are being flown, the average weekly frequency is 4.2. The only route being flown just weekly this summer is Chania.

Number of routes flown skyrockets since base opening

As stated, this summer easyJet will serve a total of 39 destinations, with Tenerife South joining the network on 5 September. The Canary Island airport is one of seven new destinations joining easyJet’s summer network from Nice, with the additions in S18 being Berlin Tegel, Biarritz, Chania, Catania, Seville and Tel Aviv. Since becoming a base in 2012, along with the destinations listed above, the following routes have been launched by easyJet from Nice: 2012 – Barcelona, Bordeaux, Lille, Nantes, Naples, Toulouse and Venice Marco Polo; 2013 – Olbia; 2014 – Hamburg, Lisbon, Marrakech and Palermo; 2015 – Amsterdam; 2016 – Cagliari, Mykonos and Palma de Mallorca; 2017 – Faro and Zurich. 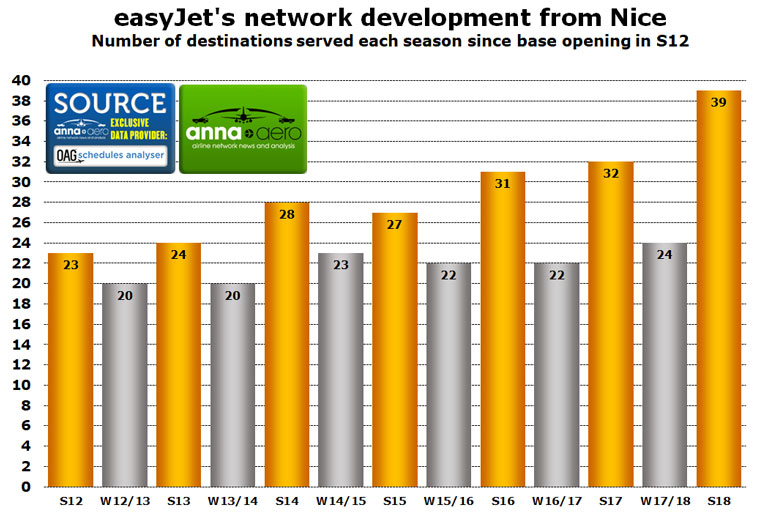 When looking back to the start of 2012, only one year has seen a reduction in the number of destinations served, with there being one less route in S15 and W15/16, with the airline dropping its summer service to Palermo after just one season, plus its year-round link to Lyon. However, this period also saw the airline launch flights to Amsterdam, resulting in a net decrease of just one destination. Since becoming a base, easyJet has launched a total of 24 routes from Nice (S18-S18), with only two routes being dropped during this period, this gives easyJet’s Nice routes a success rate of 92%. Along with Lyon and Palermo, only one route has been dropped from Nice since 2008, with that being a link to East Midlands in 2009, when the airline closed its base at the UK airport. 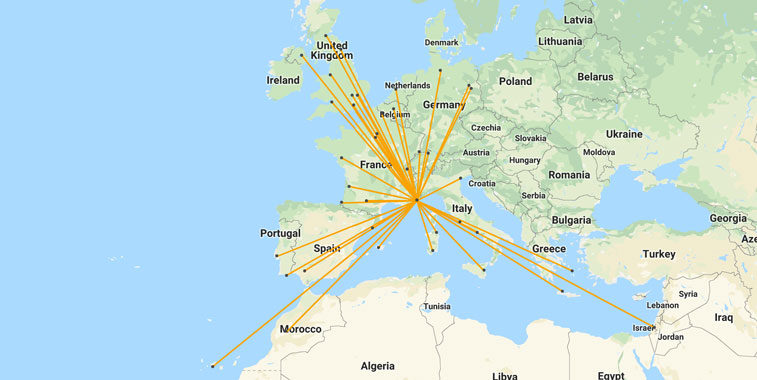 easyJet has grown its Nice network from just one connection from London Luton in 1997 to a route map of 39 destinations in 2018, with the next route launched planned for 5 September when it starts Tenerife South services. Since 2008, only three routes have been dropped from Nice, highlighting that most of the links launched have a high success rate. Those that have been dropped include East Midlands (2009), Lyon and Palermo (both 2014).