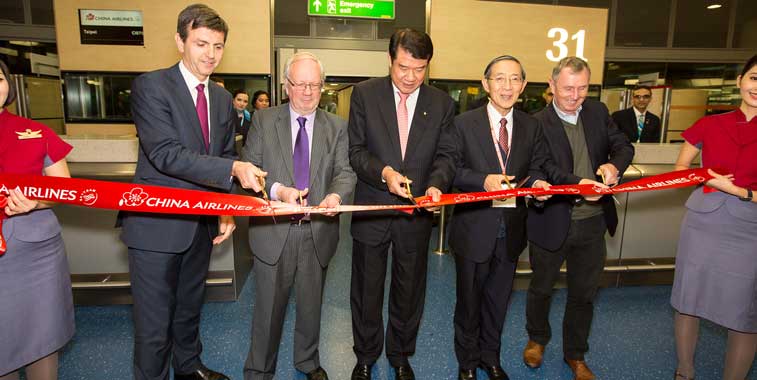 Taiwanese airports handled 65.98 million passengers in 2017, representing an impressive 87% increase since 2008. Taipei Taoyuan is by far the largest airport, accounting for 68% of Taiwan’s total air travellers alone last year. The airport will only see scheduled services on international flights in S18. On 1 December Taiwan’s only direct flight to the UK was launched with China Airlines opening a link from Taoyuan to London Gatwick. Cutting the ribbon in London were Guy Stephenson, CCO, London Gatwick; Lord Richard Faulkner; Nuan-Hsuan Ho, Chairman of China Airlines; Ambassador David Lin, Representative of the Taipei Representative Office in the UK; and Nigel Evans MP.

Taiwan (which may also be referred to as the Republic of China or Chinese Taipei) is an island located in the Western Pacific, off the East Coast of China and between Japan and the Philippines. It has a population of approximately 23 million according to the Taiwanese government, which considers Taiwan to be a sovereign and independent state. However, this sovereignty is disputed by China and only a handful of countries around the world recognise the Island as an independent nation. Regardless of its ambiguous international diplomatic classification, for the purposes of this analysis Taiwan is considered to be an entity in its own right, with services to China classed as international flights, which is consistent with the international/domestic classification in OAG Schedules Analyser (which refers to Taiwan as Chinese Taipei).

Taiwan has joined other markets in the Asia Pacific region by enjoying a strong increase in air traffic over the past 10 years. In 2008, 35.24 million passengers were handled at Taiwanese airports. By 2017 this had grown to 65.98 million, representing an 87% increase in traffic. During the period 2008 to 2017 Taiwan enjoyed nine consecutive year-on-year increases in air passengers. The largest single annual increase over the past 10 years occurred in 2010, when passenger numbers received a 14% boost. The average year-on-year growth rate from 2008 to 2017 was an impressive 7.3%. 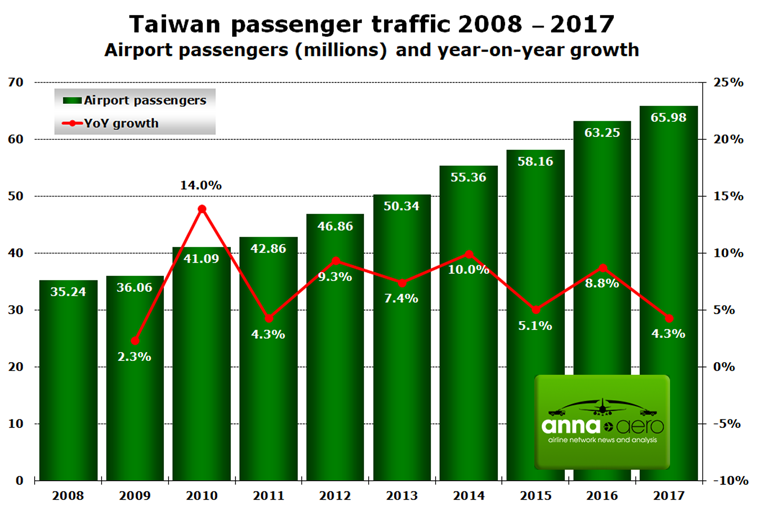 Data from OAG Schedules Analyser shows that international routes account for the majority of the capacity available to and from Taiwanese airports. In 2008, there were 36.79 million two-way seats on international links, and this increased by 83% to 67.35 million last year. In contrast, domestic seat numbers fell from 9.06 million in 2008 to 5.94 million in 2017, a reduction of 34%, although they have rebounded in the past two years after dropping to around 3.00 million seats in 2014. These trends have seen the proportion of seats operating on international routes increase from 80% in 2008 to 92% last year.

According to figures from the Civil Aeronautics Administration of Taiwan, 16 Taiwanese airports welcomed passengers in 2017, although OAG data indicates that only 12 of these had some form of scheduled services last year. Based on 2017 passenger numbers, two of the top three airports served Taipei: Taipei Taoyuan and Taipei Songshan. Together they accounted for 77% of Taiwan’s total passengers in 2017. Taoyuan is by far the largest airport, handling nearly 45 million passengers last year. All of its scheduled services are international in S18, with domestic services to Taipei handled at Songshan. Taoyuan alone accounted for 68% of all passengers passing through Taiwan’s airports in 2017, and will provide 81% of all departing seats on international services in S18. 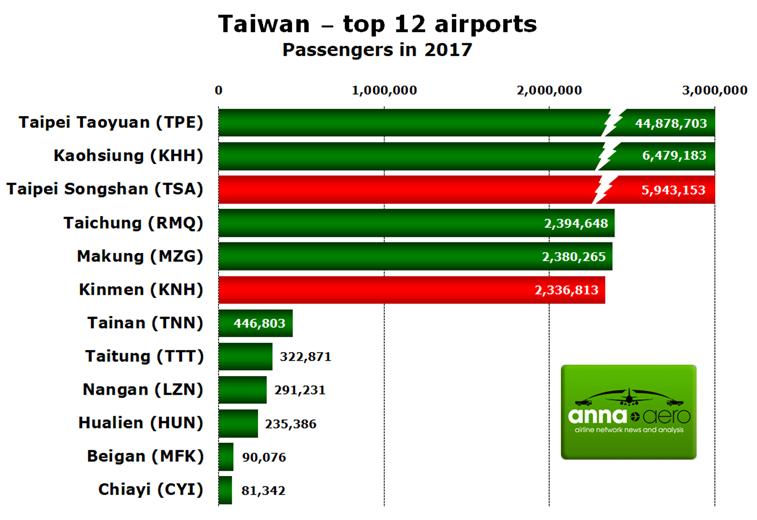 Most of the top 12 airports enjoyed an increase in passenger numbers in 2017. The strongest increases came at Hualien and Tainan, with traffic up by 28% and 22% respectively. Hualien was boosted by the introduction of scheduled services by UNI Air, plus an increase in capacity from Mandarin Airlines and HK Express, with the latter operating its Hong Kong connection year-round after only starting services in December 2016. Two of Taiwan’s top-ranked airports experienced a reduction in traffic last year (highlighted in red). The biggest reduction came at Songshan, with passenger numbers down 3.3% compared to 2016 levels.

OAG data reveals that 65 airlines will offer at least one scheduled flight to or from Taiwan during S18, although a small handful of these will be limited or irregular services. The top 12 airlines serving the Asia Pacific island, based on two-way capacity in S18, include six that are registered in Taiwan. These are China Airlines and its subsidiaries Mandarin Airlines and Tigerair Taiwan, EVA Air and its subsidiary UNI Air, and Far Eastern Air Transport. The other six carriers are all based in Asia Pacific and include three from Singapore, two from China and one from Vietnam. The top 12 airlines include three LCCs (Tigerair Taiwan, Scoot and VietJet Air). The largest LCC in the market this summer, based on available seats, is Tigerair Taiwan. China Airlines and EVA Air have long been the dominant forces in Taiwan and have maintained their positions as the first and second largest airlines over the past 10 years. In S18 they will provide 19.29 million combined seats on flights serving Taiwan, accounting for 41% of the entire market, and that’s before any of their subsidiaries are taken into account. Both carriers operate international links but neither will offer domestic services in S18, leaving the internal flights to their various subsidiaries. The largest non-native carrier is Cathay Pacific Airways, which offers 114 weekly flights between Hong Kong and Taoyuan in peak S18. 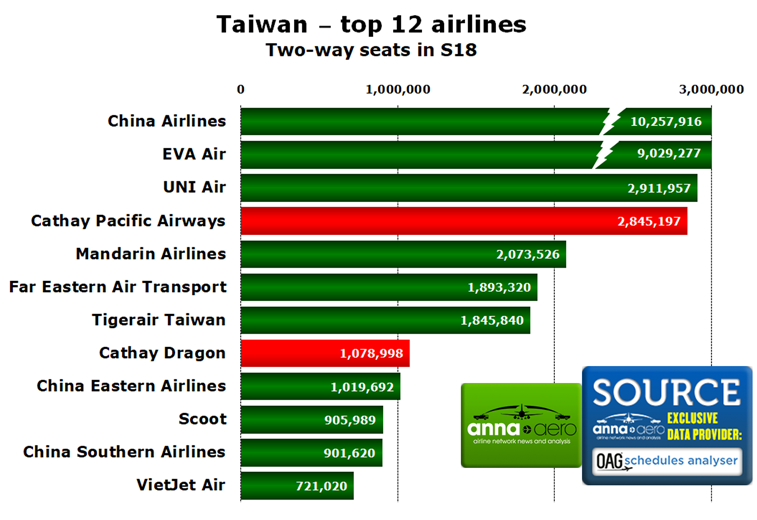 Most of the top-ranked carriers serving the Taiwan market have increased their capacity for S18 compared to last summer. The largest percentage growth has come from VietJet Air which has increased its seat count by 84% compared to S17. The Vietnamese LCC added new routes from Hanoi to Kaohsiung and Taichung and also increased capacity across its existing services from its home market. Two of the top 12 carriers have witnessed a decline in traffic (highlighted in red). Cathay Pacific Airways and its subsidiary Cathay Dragon will offer marginally less seats this summer, with the carriers 1.8% and 0.3% down on S17 figures.

The Taiwanese airports with the most domestic capacity in S18 are Songshan, Kaohsiung and Makung. The three busiest domestic airport pairs involve direct links between these airports, with Songshan – Makung marginally ahead of Songshan – Kaohsiung as the largest by capacity. Seven airports in Taiwan will offer scheduled international services this summer but only three (Taoyuan, Kaohsiung and Songshan) will see more than one million seats available on foreign flights. The biggest international link from Taiwan this summer is the sector between Taoyuan and Hong Kong, with five carriers offering 2.43 million two-way seats on the route in S18.  There will be 279 one-way flights on this sector in peak S18.

There will be scheduled services to 28 different international markets from Taiwan in S18, although the connection with Russia appears to be a one-off flight, suggesting some form of scheduled charter. The  biggest international markets are Japan and China, with more than four million one-way seats available to each of these countries. Japan alone will account for 23% of the departing capacity on international services from Taiwan in S18, with scheduled services available from five Taiwanese airports to 26 combined Japanese destinations. In total, 10 of Taiwan’s top 12 international markets are in Asia Pacific. The highest-ranked country from outside this region is the US. The largest European market with direct links to Taiwan is the Netherlands in 16th position. The UK is a new entrant to the direct destination board in S18 after China Airlines introduced a service from Taoyuan to London Gatwick in W17/18, although it should be noted that EVA Air was already operating an indirect link from London Heathrow to Taoyuan via Bangkok Suvarnabhumi. 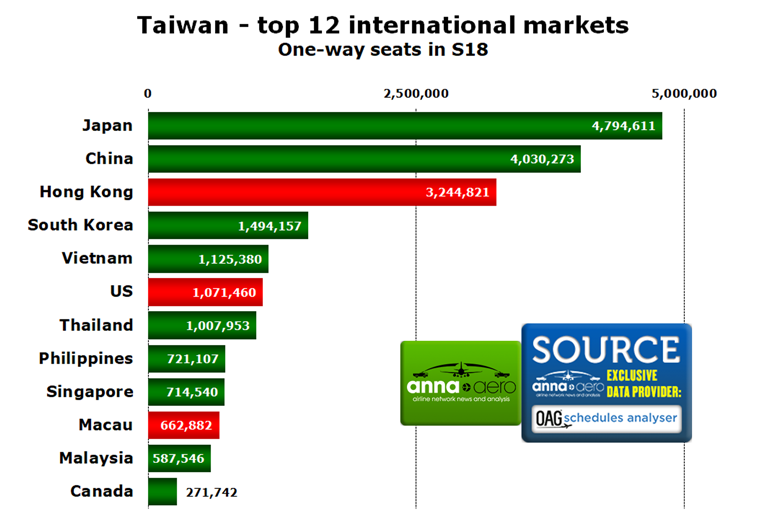 Most of the top 12 international markets have seen an increase in available capacity this summer compared to S17. The largest increase has come on services to Thailand, with seat numbers up 29% due to additional capacity being deployed by the likes of China Airlines, EVA Air and Thai Airways, along with LCC Thai Lion Air. Three of the top-ranked markets have witnessed a cut in seat numbers (highlighted in red). The biggest decline has been seen on services to Hong Kong, with one-way seat numbers down 4.4% on the city state link when compared to S17 levels. 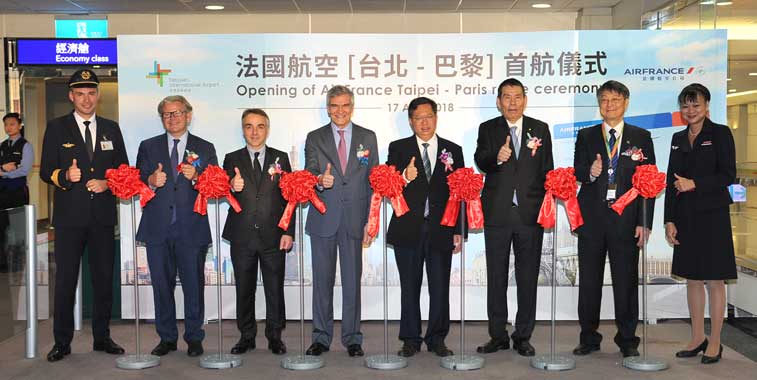