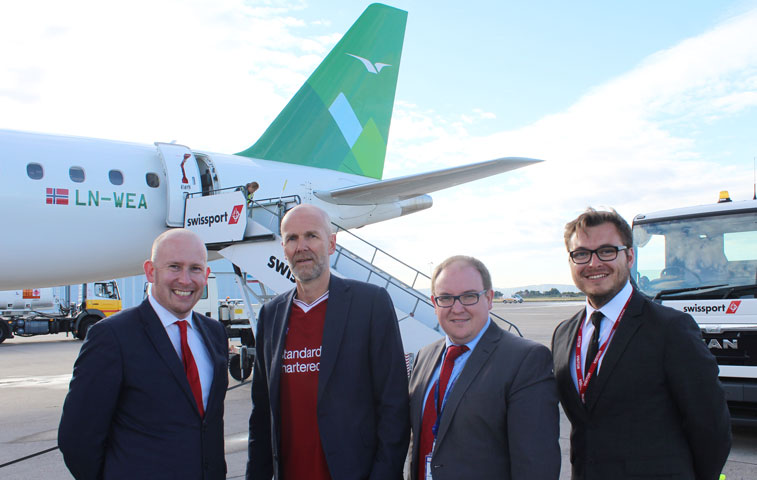 History was made on 10 August when Norwegian-based carrier Widerøe became the first-ever airline to launch an E190-E2 service from the UK, beginning a twice-weekly service between Bergen and Liverpool. The airline will serve the European city pair on Mondays and Fridays, with connections available in Bergen to other Scandinavian cities including Oslo and Helsinki. This becomes the sole non-stop service from Liverpool to Scandinavia, with schedules designed to allow British passengers to escape to the fjords of Norway for a weekend break, while in the other direction the Liverpool service is likely to prove popular with Norwegian Premier League football fans.

With this launch, Liverpool becomes the 12th airport in the UK to offer direct flights to Norway this summer, seeing the city join the ranks of Aberdeen, Edinburgh, Glasgow, Inverness, London’s Heathrow, Gatwick and Stansted, Manchester, Newcastle, plus Kirkwall and Sumburgh in the Highlands of Scotland.

Liverpool Airport has had an impressive 2018 so far, not only welcoming Widerøe, it’s seventh scheduled airline, but also seeing expansion from existing carriers. easyJet has just based an eighth aircraft at the airport, allowing routes to Dalaman, Palermo and Pula to be opened, while also confirming it will begin a Toulouse service from W18/19. Ryanair has added Shannon this summer, while from W18/19 it will serve Paphos. Wizz Air will introduce three new routes to Romania from October, namely Bucharest, Cluj-Napoca and Iasi. Finally Blue Air has restructured the schedule for its based aircraft to allow it to serve Malaga and Palma de Mallorca, adding capacity to some of the UK airport’s most popular destinations. In total for H1 2018, Liverpool Airport handled over 2.4 million passengers, up 3.0% versus H1 2016. The facility has also recently reported that 12-month rolling traffic has peaked above five million passengers for the first time since 2011.

A few weeks prior to the inaugural flight, Liverpool Airport’s Aviation Development Manager, Declan Maguire, invited anna.aero’s Assistant Editor, Jonathan Ford, to attend the first flight ceremony. The Invitation was accepted, and Ford was soon on his way up to one of the UK’s most visited cities by international visitors, and fifth overall according to data from VisitBritain. 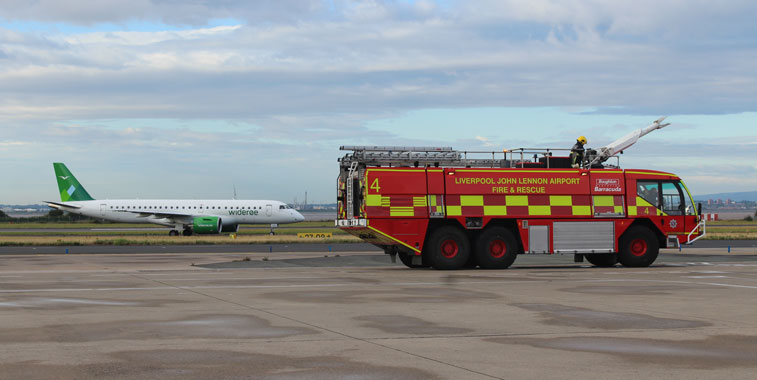 Touchdown in Liverpool. Flight WF380 arrived on Liverpool’s Runway 27 at 07:47, some 17 minutes behind its scheduled arrival time of 07:30, with the delay coming as a result of the aircraft performing a flyover of the city before touching down. Once the aircraft had vacated the runway, the airport’s firefighters prepared to baptise the service. Liverpool’s firefighters produced a splendid water salute for Widerøe’s inaugural service from Bergen, backdropped by the world-famous River Mersey. A rainbow even made an appearance as the aircraft passed through. Once the route had been baptised, it was time for the aircraft to park on stand and the passengers to disembark, with all being met by a delegation of airport, airline, VIP and travel industry representatives. A healthy load indeed. anna.aero counted over 80 passengers disembarking the inaugural flight, including the airline’s CFO John Arntsen. Upon arrival, the first flight guests were presented with Liverpool-branded goody bags, distributed by some of the team from Marketing Liverpool. 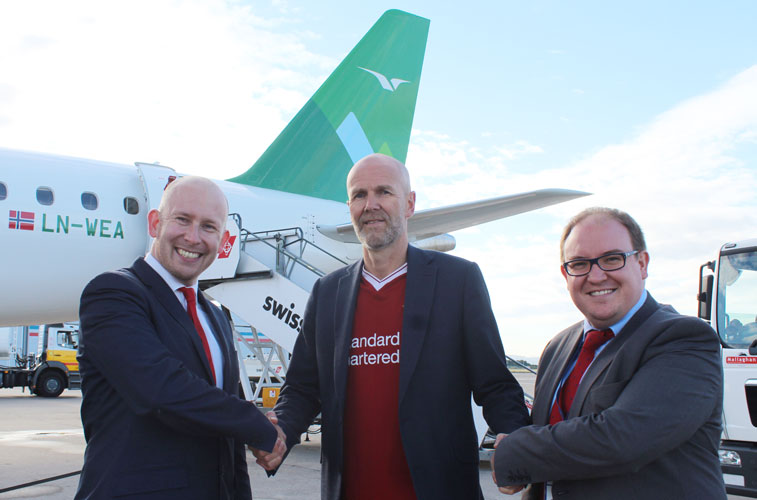 Sealing the deal! Shaking hands on the success of the first flight between Bergen and Liverpool, with support also being shown for Liverpool Football Club, are: Paul Winfield, Director of Aviation Development and Marketing, Liverpool Airport; John Arntsen, CFO, Widerøe; and Declan Maguire, Aviation Development Manager, Liverpool Airport. Not only was it a celebration at the airport, but Liverpool FC went on to win their first game of the Premier League season 4-0. 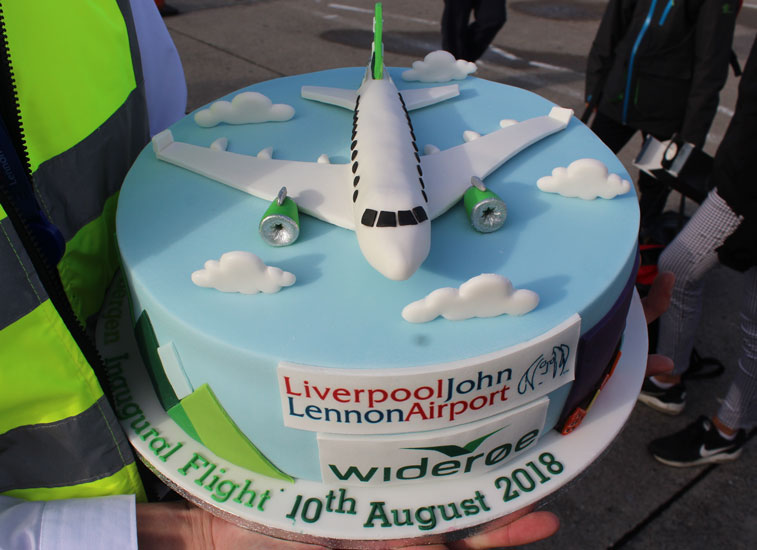 The moment anna.aero had been waiting for….the cake! Of course no route launch is complete without a great marketing cake, and Liverpool’s bakers did not disappoint, with the airport commissioning this calorific wonder to mark the occasion, decorated in the sites of Bergen city and the surrounding mountains and fjords. 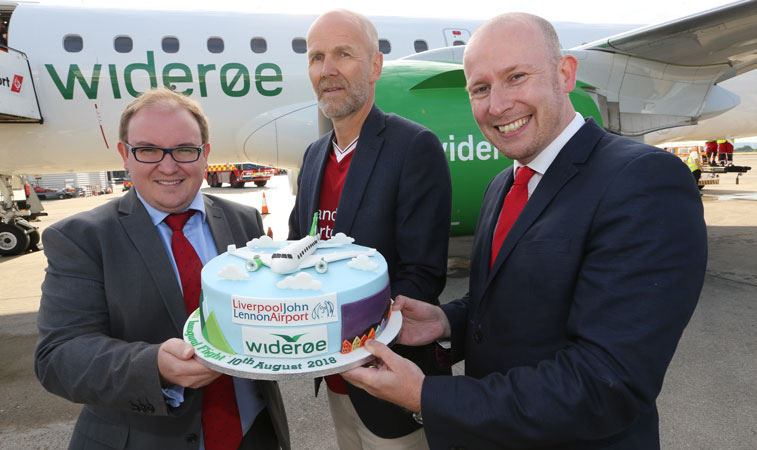 Before the cake was cut for staff and passengers to enjoy, it was time for Maguire, Arntsen and Winfield to pose with the star of the show by the aircraft ahead of the first flight back to Norway. 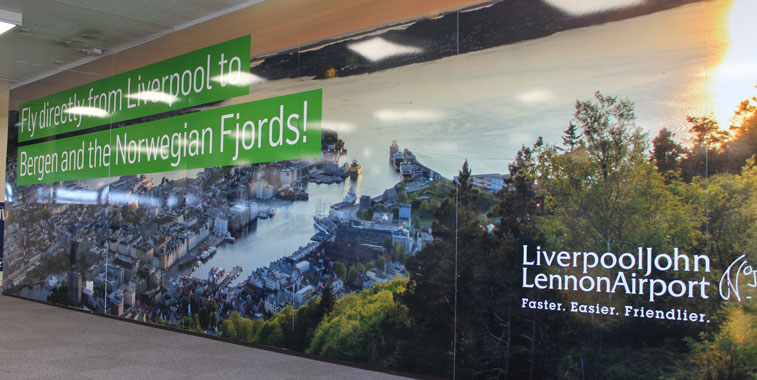 Once all celebrations on the apron were completed, it was time to conclude the festivities back in the terminal. Once inside, the marketing efforts of Liverpool Airport and the airline were clearly on show, with a massive wall banner having been placed by the boarding gate to highlight the fact that Liverpool is directly linked to the Norwegian Fjords. 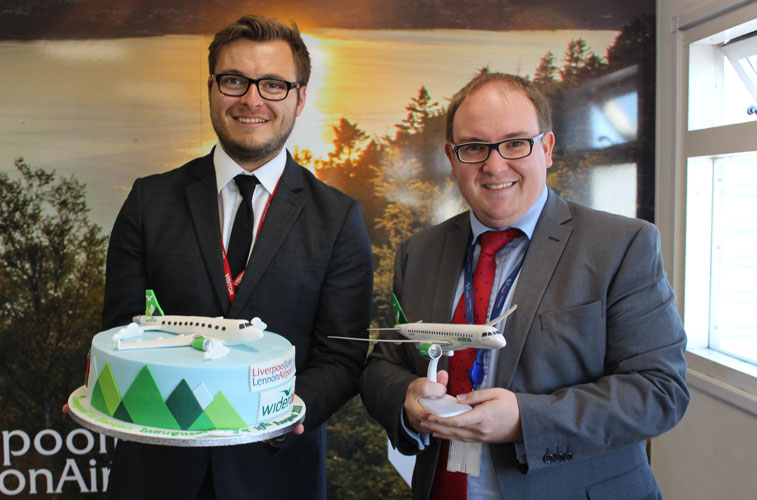 Gained….one cake by anna.aero’s Assistant Editor Jonathan Ford, and one model by Liverpool’s Aviation Development Manager Declan Maguire. The airline is offering a Mondays and Fridays schedule for its its new service, designed to allow British passengers to escape to the fjords of Norway for a weekend break, while in the other direction the Liverpool service is likely to prove popular with Norwegian Premier League football fans. Ford would like to thank Liverpool Airport, and indeed Maguire, for inviting him along to join Widerøe’s first flight celebration.