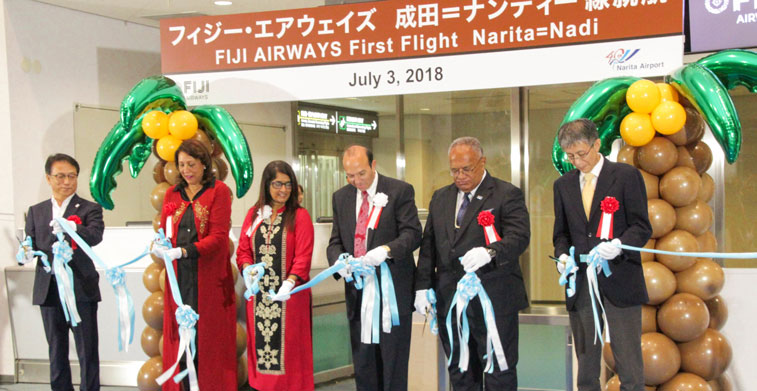 Fiji Airways launched flights from Nadi to Tokyo Narita on 3 July. Cutting the ribbon at the opening ceremony in Japan were: Takeshi Arakawa, Executive Director, Narita International Airport Corporation; Lailun Khan, Chairperson, Fiji Civil Aviation Bureau; Shaenaz Voss, Executive GM, Fiji Link and Group Corporate, International and Government Affairs, Fiji Airways; Marc Cavaliere, CCO, Fiji Airways; Isikeli Mataitoga; Ambassador of Fiji to Japan, Russia and Philippines; and Ishii Yasuo, SVP, Narita International Airport Corporation. In 2018, the airline will offer 2.30 million seats across its network, up 11% versus the 2.07 million it flew in 2017, and up 46% since being re-branded from Air Pacific in 2013.

Fiji Airways re-branded from Air Pacific towards the middle of 2013, and since then the carrier has expanded quickly, offering 724,000 more seats this calendar year then it did four years ago. This expansion fits nicely when comparing it with the growing number of international visitors arriving in Fiji. When referencing data published by the Fiji Bureau of Statistics (FBS), 842,884 non-Fijian residents arrived in the country in 2017, up 6.4% versus 2017 and 28% greater than the numbers that arrived in 2013. This highlights that on an international level, Fiji is becoming more popular, a massive benefit for Fiji Airways as it continues to expand. For the first half of 2018, 383,982 international visitors have arrived in Fiji, up 3.0% versus H1 2017, highlighting that growth is continuing this year.

Over 2.30 million seats this year 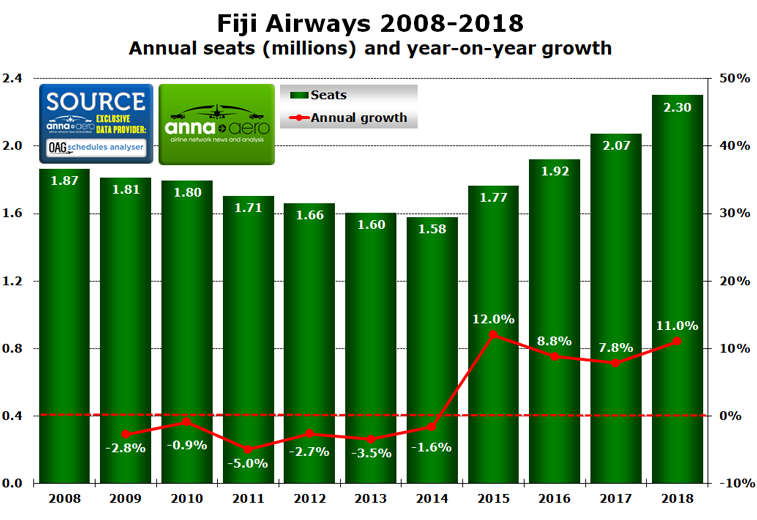 Presently Fiji Airways operates a fleet of five A330-200s and one A330-300, plus one 737-700 and four 737-800s, with five 737 MAX 8s on order. Under its subsidiary Fiji Link, with flights also operating under Fiji Airways’ FJ flight code, it also operates two ATR 72-600s, one ATR 42-600 and a few De Havilland DHC Twin Otters, with these being used on domestic routes, plus links to Port Vila in Vanuatu, Vavaʻu in Tonga and Funafuti in Tuvalu. While the latter regional aircraft only make up a small part of the fleet, their flying operation accounts for 25% of the airline’s annual seat capacity.

Since being re-branded to Fiji Airways in 2013, the following destinations have been added to the carrier’s network from Nadi: Honiara and Wellington (2015); San Francisco and Singapore (2016); Adelaide (2017); plus Tokyo Narita (2018). With the addition of the latter destination, it means that Japan becomes the airline’s 13th country market (highlighted in light blue). Overall, international markets account for 40% of Fiji Airways’ annual capacity, with the remaining 60% scheduled for intra-Fijian services, with Fiji being the leading country market (highlighted in light green), growing by close to 13% since 2017. 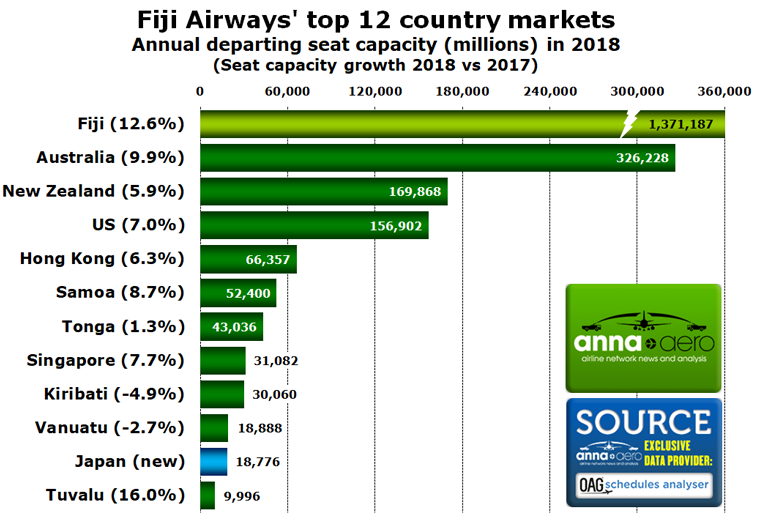 Australia is the leading intentional market, with Fiji Airways serving Adelaide, Brisbane, Melbourne and Sydney. Overall Australian visitors accounted for 43% of international arrivals to Fiji in 2017, however the nation’s market share has fallen from a 52% share of international visitors in 2013 when referencing FBS data. During the period between 2013 and 2017, nation’s showing strong growth towards Fiji include Fiji Airways’ third largest market – New Zealand – where visitor arrivals have grown 70%, while the fourth place US has reported a 48% increase in visitors to Fiji. One market which is not yet a permanent fixture on Fiji Airways’ route map is China, where visitor numbers have grown 105% from 23,775 in 2013 to 48,796 last year, with MIDT data showing that around 41% of people travelling on Fiji Airways’ service between Nadi and Hong Kong connected onto a service to a final Chinese destination in 2017. The leading destinations in China last year were Beijing and Shanghai Pudong. Japan, the latest country market added by Fiji Airways, saw 6,350 arrivals to Fiji in 2017.

Could the MAX make the most for Perth?

Given that Fiji Airways has five 737 MAX 8s on order, it is likely that the carrier will be looking to add a few new routes to its network once these aircraft arrive, although some of them will replace the older 737-800s, with three of the four in the fleet being over 10 years old according to Flightradar24.com data. When looking at OAG Traffic Analyser data, the numbers show that the top unserved market at the moment from Fiji is to its leading international market – Australia – with Perth taking the title of the leading unserved destination as a result of Fiji Airways launching flights to Tokyo Narita (highlighted in light green). Along with Perth, two other top 10 markets (all highlighted in blue) are within range of the 737 MAX 8, however Queenstown and Napier in New Zealand face operational limitations. One market which should be ruled out is London Heathrow, with the UK unreachable non-stop from Nadi. 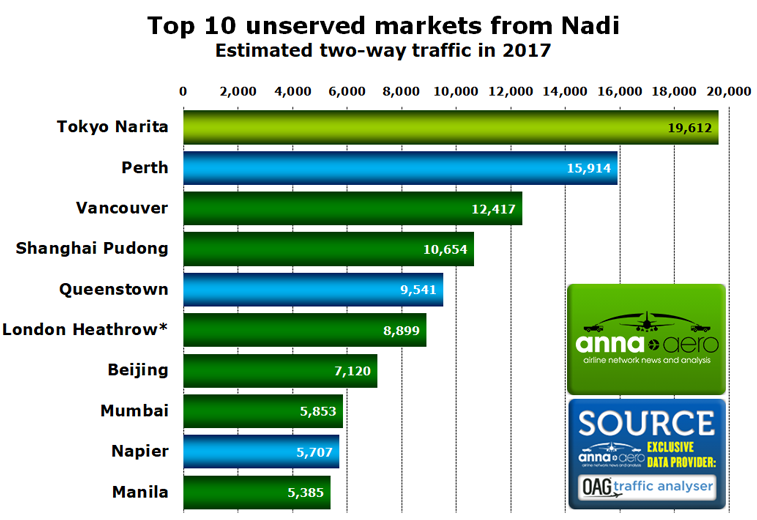 Perth recorded an average PDEW of 48.2 last year, with a market of 16,000 passengers ideal for a twice-weekly service. What should be noted is that the 737 MAX 8 is able to reach the likes of Hawaii from Fiji, meaning that some long-haul capacity from the wide-body fleet could be utisied with MAX 8s, freeing-up the Airbus’ in Fiji Airways’ fleet to accomodate routes to China, a market surging with popularity in Fiji based on FBS data. 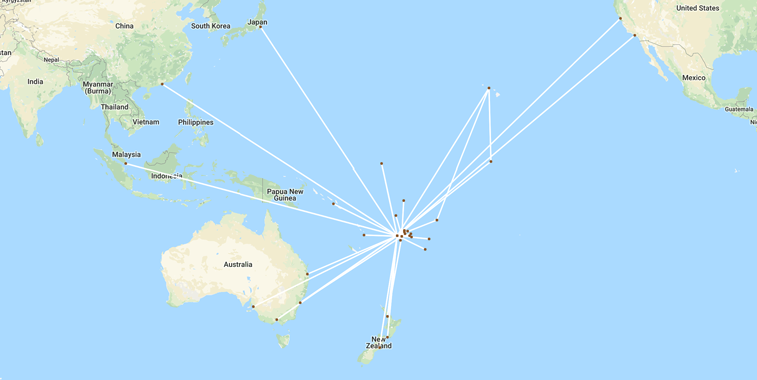 Fiji Airways’ S18 route map includes its recently introduced service to Tokyo Narita, its third route to Asia from Nadi after Singapore and Hong Kong. Since its re-branding the carrier has introduced six new destinations to its network from Nadi, with Tokyo being alongside Adelaide, Honiara, San Francisco, Singapore and Wellington.