Canadian capacity increased by 34% from 2008 to 2017; foreign flights account for most seats; Portugal fastest-growing international market 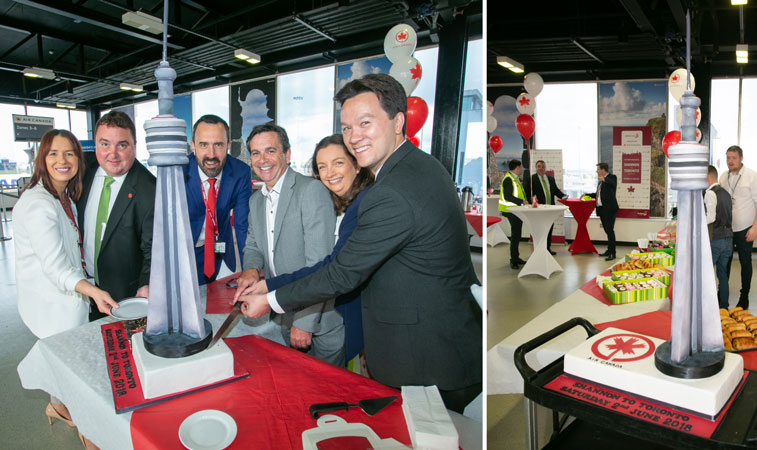 The capacity available on all flights serving Canadian airports increased by 6.0% last year to 139.28 million seats. The North American nation has now experienced eight consecutive years of capacity growth, and early indications are that this run is set to continue in 2018, with 146.93 million seats already scheduled to serve the Canadian market this year.

Capacity grows by more than one-third over 10 years

From 2008 to 2017, the number of seats available to and from Canadian airports increased by 34% from 103.81 million to 139.28 million. During this period there was only one year-on-year decline in capacity, with that occurring at the height of the global economic recession in 2009. From 2009 to 2017, seat numbers increased by 39%. The average annual growth rate over the past eight years was 4.2%, with the single largest increase coming in 2017. 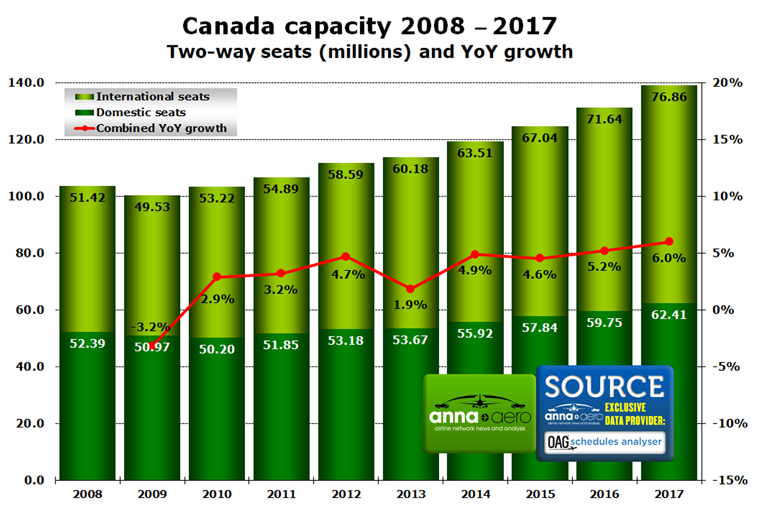 Approximately half of all seats on offer from Canadian airports in 2008 were operated on domestic services. Although domestic capacity has increased since then, it has been outpaced by the growth in two-way international seats. From 2008 to 2017, domestic capacity rose by 19%, from 52.39 million seats to 62.41 million. In contrast, two-way international seat numbers increased from 51.42 million to 76.86 million, representing a growth rate of nearly 50%. As a result, the overall share of Canadian capacity represented by international operations grew from 50% in 2008, to 55% in 2017.

According to OAG data, 249 Canadian airports welcomed at least one scheduled flight in 2017. Clearly some of these host far more extensive and regular services than others, with 47 airports offering 100,000 departing seats or more last year. An analysis of year-on-year capacity increases for the more established airports (those with 100,000 departing seats or more in 2016) reveals that 31 enjoyed an increase in departing seat numbers in 2017, while 18 witnessed cuts. The strongest growth came at Hamilton, which essentially saw its capacity double from 2016 to 2017. This was largely due to an increase in operations from WestJet, including the introduction of new routes, and the launch of services by ULCC Flair Airlines. The largest airports in the top 12 growth table, based on 2017 capacity, were Vancouver and Montreal in 11th and 12th positions respectively. 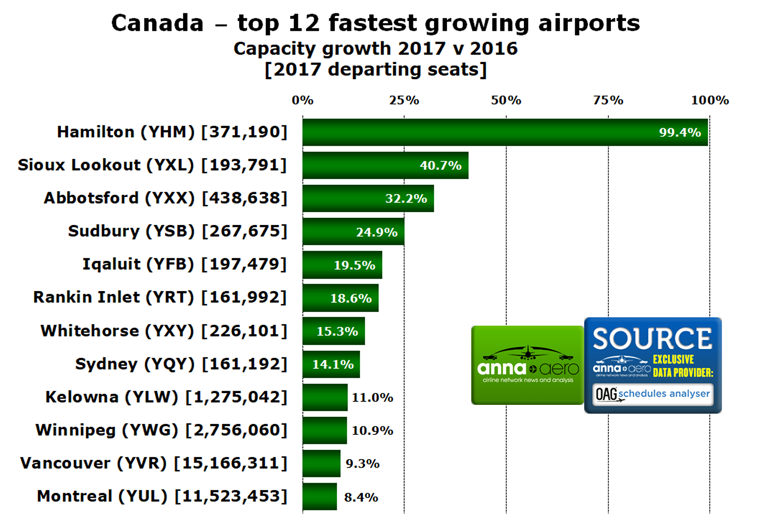 A further 193 Canadian airports handled some form of scheduled service but offered fewer than 100,000 seats in 2016. Of these, 102 saw an increase in capacity in 2017. OAG schedules suggest that the strongest growth amongst these facilities was seen at Mirabel, with the Quebec airport witnessing a 200% increase in departing seats, from a very modest base. This was due to Nolinor Aviation offering seats on services to Val D’Or, which is also in Quebec. According to its website, Nolinor Aviation does not appear to operate scheduled flights, so anna.aero assumes that this capacity was provided on, or as part, of a scheduled charter operation.

Schedules show that 73 international country markets welcomed at least one flight from Canada during 2017. Unsurprisingly, the US is by far the largest of these, with 18.58 million one-way seats available to Canada’s North American neighbour last year. However, the percentage of total international capacity represented by US services is in decline. In 2008 US flights accounted for 62% of all departing international seats from Canada. By 2017 this market share had dropped to 48%. This is despite seat numbers to the US increasing by 17% over the same period, which indicates that the drop in market share is due to even greater growth to other international locations.

An analysis of year-on-year capacity increases for Canada’s more established international markets (those with 100,000 one-way seats or more in 2016) reveals that 28 saw an increase in departing seats in 2017, while six experienced cuts. The strongest growth came on services to Portugal, which was in part due to the introduction of services between Lisbon and Toronto Pearson by TAP Air Portugal. Five of the top 12 growth markets were in Europe, with four in Asia Pacific, one in the Middle East and two in the Americas. 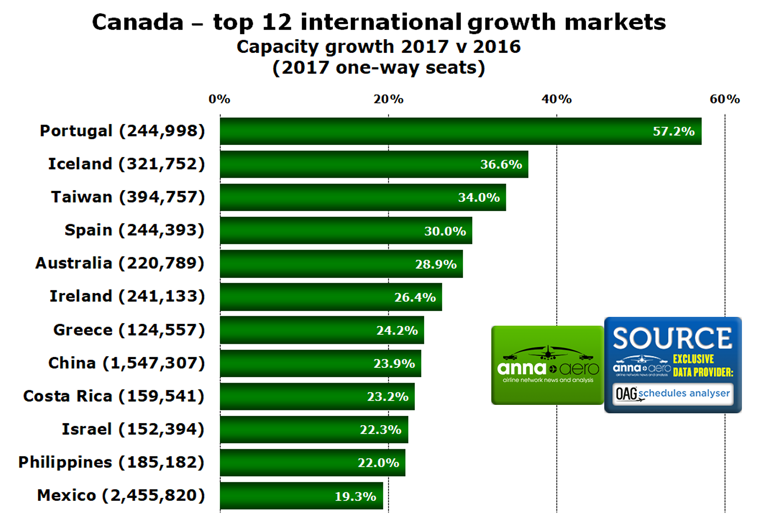 The largest international market to make the top 12 growth list was Mexico, which is also the second biggest for foreign flights from Canada after the US. Air Canada and Aeromexico both increased their available seats between Canada and Mexico in 2017, while there was also a new entrant to the market in the form of Interjet.

A further 42 international markets were served from Canada with fewer than 100,000 one-way seats in 2016. One notable example from this group which experienced impressive growth last year was India, with seats to the Asian country more than doubling compared to 2016 numbers. Key contributing factors to this were Air Canada increasing capacity on its link from Pearson to Delhi, while the Canadian flag carrier also introduced a route from Pearson to Mumbai. 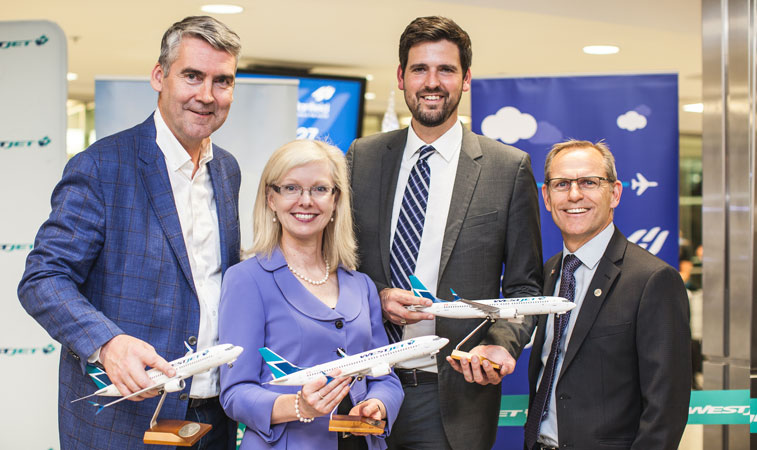 International seats accounted for 55% of all capacity serving Canadian airports in 2017, up from 50% in 2008. WestJet commenced flights between Halifax and Paris CDG on 31 May, with the French hub becoming the Canadian carrier’s first destination in Mainland Europe. Among those at the launch were: Stephen McNeil, Premier of Nova Scotia; Joyce Carter, President & CEO, Halifax Airport; Sean Fraser, Member of Parliament for Central Nova; and Tim Croyle, Interim EVP, Commercial, WestJet.