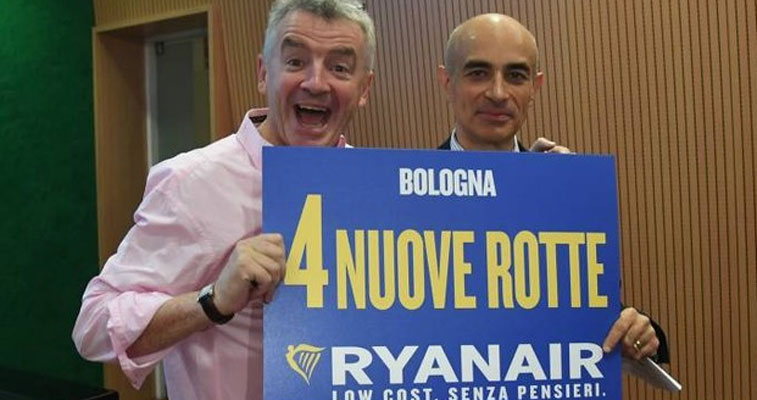 Ryanair last year announced four new routes from Bologna for S18, with routes to Bratislava, Cologne Bonn, Naples and Prague, which all launched in W17/18, being continued into this year’s summer season. Pictured at the press conference to confirm the carrier’s plans for this year’s summer season are Michael O’Leary, CEO of Ryanair and Nazareno Ventola, CEO of Bologna Airport. Also added for S18 was Mykonos, while routes to Amman and Kaunas will begin ahead of the W18/19 season. Overall, Ryanair is offering 46 destinations from Bologna this summer.

Ryanair’s third largest base in Italy is situated at Bologna Airport, nestled in a city that has a core population of over 385,000 people. The Irish ULCC’s two larger Italian bases are Milan Bergamo (11.61 million seats in 2018; 185% bigger than Bologna) and Rome Ciampino (5.79  million; 37%). Before Ryanair’s base in Bologna opened, the Italian airport was handling 4.23 million passengers per year (figures for 2008), while last year the facility processed just shy of 8.20 million people, nearly doubling its traffic during the time in which Ryanair has established and grown its operations from the city.

Base grows 200% since opening

Ryanair opened its Bologna base in 2009, initially with two based 737-800s and a total of 1.41 million seats being flown from the airport that year. Looking at a day’s schedule in S18 (15 August), the airline has increased its based fleet to seven aircraft, with 4.22 million seats being flown this year, an increase of 200% versus 2009. Ryanair will grow its seat capacity from Bologna by 3.5% in 2018 versus 2017 figures, based on current schedules, with over 144,000 more seats being offered in this year. 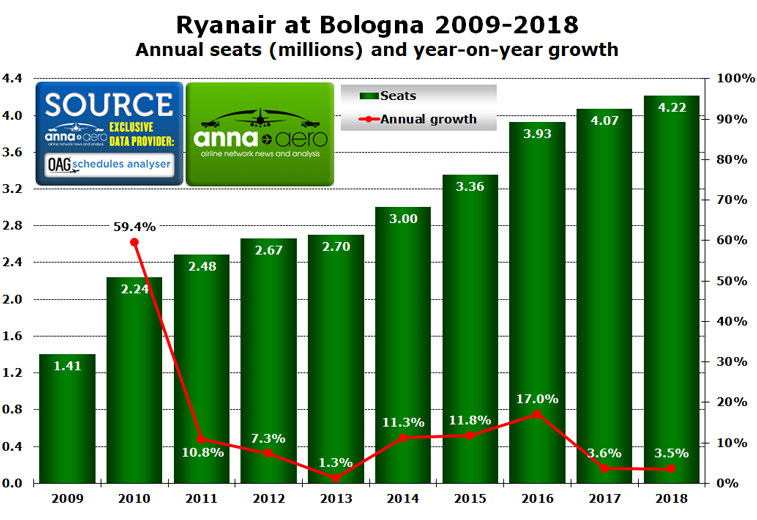 In 2009, the number of seats flown by Ryanair on domestic routes from Bologna accounted for 30% of the carrier’s total capacity from the city that year, with there only being four Italian routes, namely Bari, Brindisi, Lamezia Terme and Trapani. While the airline’s growth has been strong over the past decade, the domestic market in 2018 accounts for 37% of seats, showing that the domestic and international markets are growing at not too dissimilar rates from Bologna. The largest market share that the domestic sector has seen from Bologna with Ryanair is 44%, a result that was reported in 2015 when eight routes were flown to other Italian airports.

When Ryanair first established its base at Bologna in 2009, it had gained close to 23% of market share of all seats from the city by the end of that year. Following a double-digit increase of its own seats in 2010 (59% increase in seats versus 2009) and 2011 (11%) respectively, the carrier’s market share at Bologna grew by 11 percentage points. However, following strong gains in these years, in 2013 the carrier saw a small dip in its market share, with Ryanair only growing by 1.3% from Bologna that year. Since 2013 the airline has shown modest growth from the city, however this year the airline is showing a decline once again, albeit by just a 0.1 percentage point. 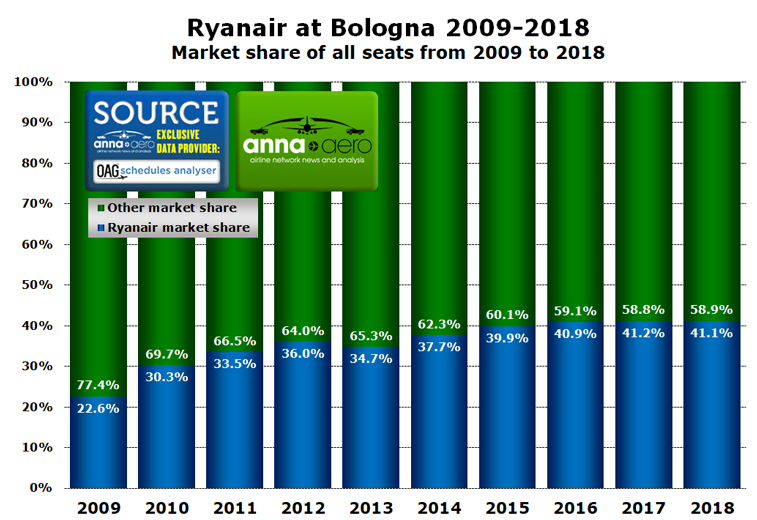 While Ryanair is the largest carrier at Bologna, the second-placed airline, and Italian flag carrier Alitalia, has grown its capacity from the airport by 44% this year. On 1 August the latter airline introduced a twice-daily service between Bologna and Palermo, while also increasing its frequency on its route to Catania from daily to twice-daily back in March. Interestingly, both cities in Sicily are Ryanair’s top routes from Bologna (more detail below). Along with Alitalia’s expansion, other factors which have stinted Ryanair’s market share growth include strong increases in capacity from other airlines, such as Air France (fifth biggest carrier; 7.1% growth in 2018), British Airways (sixth; 9.6%), KLM (eighth; 16%), Aeroflot (ninth; 12%), Blue Panorama Airlines (12; 29%) and Vueling (13th; 48%), with the latter offering five more rotations a week on its sole route to Barcelona this summer than it did in S17, going from daily to 12 times weekly according to OAG schedules.

Of Ryanair’s routes from Bologna which are flown with a minimum of a daily frequency this summer, for which there are 15, eight are domestic, with there being no Italian connections outside of this ranking. It should be noted that Ryanair does serve a ninth domestic link, however its services to Trapani (all flown daily) only operate during the winter season, with the route bookable from 28 October. The top two routes for Ryanair from Bologna are Catania and Palermo in Sicily, with both seeing a twice-daily rotation in S18, matching the number of rotations offered by Alitalia. Overall domestic services account for 35% of weekly departures in S18. 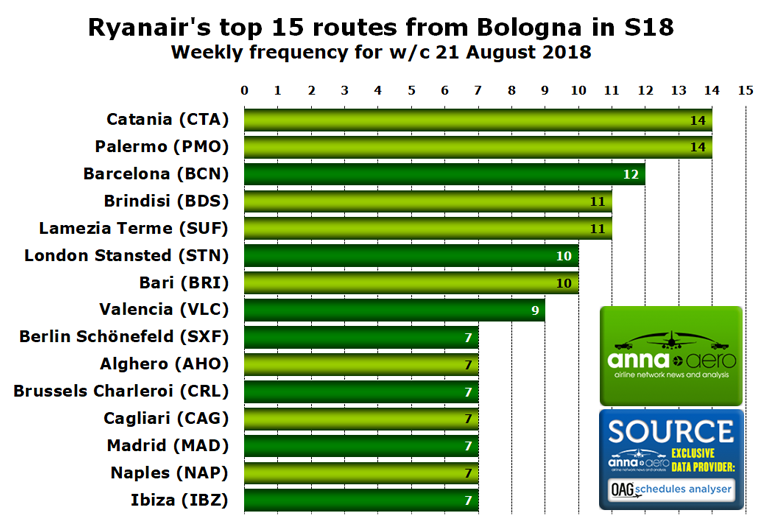 The leading international service is Barcelona, with 12 weekly flights, the same as Vueling, with Ryanair offering only a daily rotation on Thursdays and Saturdays. After Barcelona, the next biggest international service is to the airline’s biggest base – London Stansted. Outside of the top 15 routes, the remaining 31 destinations that Ryanair serves from Bologna in S18 offer an average weekly frequency of 2.9, with only Rhodes seeing a weekly rotation.

This summer marks the largest operation that Ryanair has had from Bologna, not only in terms of capacity, but also its range of destinations, with it flying to 46 airports this summer from the Italian city. Judging from the airline’s history at the airport, the biggest growth in destinations served has come in the past few years. Looking back at the W11/12 season, seven fewer destinations were flown to than in W10/11, with flights to Dublin, Edinburgh, Fez, Granada, London Gatwick and Porto not operating. While these routes were dropped for that winter season, Dublin, Edinburgh and Porto are still flown to from Bologna by Ryanair in 2018, and on a year-round basis. There has only been one summer season where the number of destinations served has decreased, with one less route being flown in S15 when compared to S14, with flights to Oslo Rygge being chopped. This summer, routes to Bratislava, Cologne Bonn, Naples and Prague continued on from W17/18, while a new route to Mykonos was also added. However, routes to Weeze (last flight 28 October 2017) and Trapani (converted to winter seasonal) did not operate this summer. 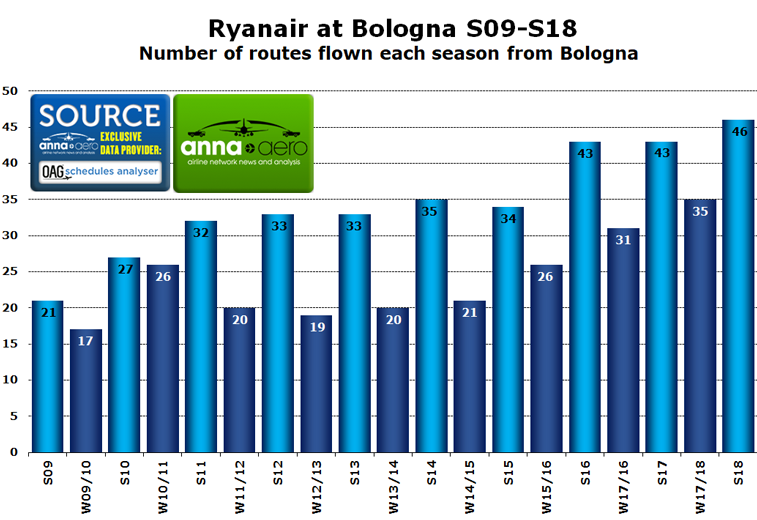 For this coming winter season Ryanair will be launching flights from Bologna to Amman in Jordan and Kaunas in Lithuania. In total for W18/19, Ryanair is scheduled to operate 41 routes from Bologna, up from 35 last winter and the first time that the carrier has flown over 40 routes in a winter season from the city. Along with the additions mentioned, services to Alicante, Manchester, Thessaloniki and Porto will operate year-round. 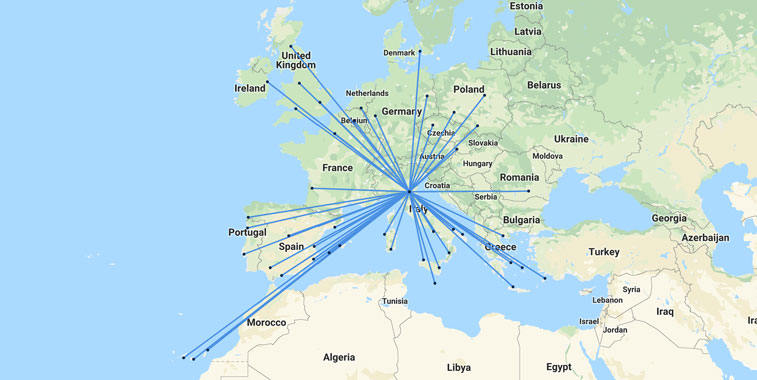 Ryanair’s Bologna route map in S18 consists of 46 destinations, with its top two routes being to Catania and Palermo in Sicily, sectors which are flown twice-daily this summer. For the coming winter season, the carrier will introduce flights to Amman in Jordan and Kaunas in Lithuania, while Trapani will be returning for the winter season. Along with these additions, services to Alicante, Manchester, Thessaloniki and Porto will be converted to year-round links.