Airbus and Boeing delivery review – July 2018; Airbus adds A220 series to delivery books as its productivity improves 64%; Boeing down 33% 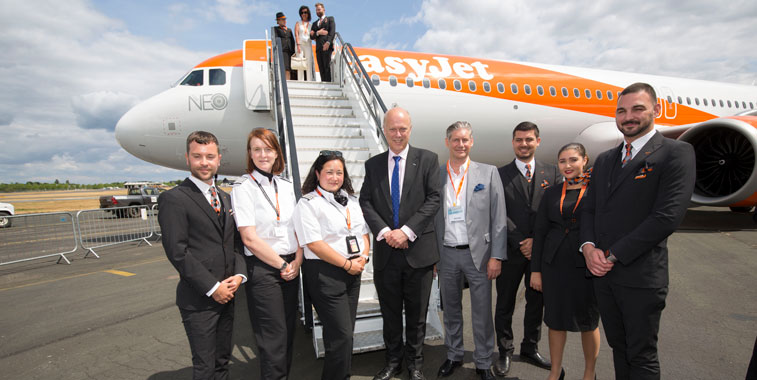 easyJet received its first A321neo in July, with the UK carrier showcasing its newest aircraft type at the Farnborough Airshow. Pictured with the aircraft and some of the airline’s crew are UK Transport Secretary, Chris Grayling, and easyJet CEO, Johan Lundgren. “We are delighted to mark the delivery of our first A321neo. It will enable us to deliver our strategy of securing and growing our number one positions at Europe’s leading and slot-constrained airports,” added Lundgren. The first A321neo is now based at London Gatwick, offering rotations to Alicante, Malaga and Palma de Mallorca.

Having reviewed H1 2018 deliveries, anna.aero is ready to commence the analysis of distribution performance for Airbus and Boeing in H2, starting with last month. July 2018 was an interesting month for aircraft deliveries from Airbus and Boeing, with the former adding the A220 series to its list of aircraft following its new deal with Bombardier, while Boeing saw its productivity rate drop to its lowest record since January 2012, a result of engine providers struggling to hit record output targets, according to various reports.

Last month witnessed Airbus hand over 77 aircraft, with two being A220-300 deliveries to airBaltic and Korean Air respectively, while Boeing distributed just 39 units, down from a total of 82 which it recorded in June, and 19 behind the 58 aircraft it managed to send to customers in July 2017. Airbus on the other hand saw its productivity rate rise considerably, by 64%, with its 77 unit deliveries comparing to 47 in July 2017, however it is three less than the 80 aircraft it managed to distribute in June. Overall both manufacturers delivered 116 aircraft in July this year, compared to the 105 that the duo managed during July 2017, resulting in a productivity improvement of 10% for both companies.

Airbus distributed 77 aircraft in July, with 53 airlines picking up at least one unit from the European manufacturer. Of last month’s deliveries, 65 units were narrow-body variants. As stated, these included two A220-300s, the first of the aircraft type to be delivered under the Airbus brand following the company’s deal with Canadian produced Bombardier.

Airbus’ most popular unit is the A320, with it handing over 40 in July, while the second-most popular aircraft was the A321. With regards to the wide-body market, the A350-900 saw the most deliveries, with five being handed over. Of these deliveries, the most interesting was easyJet receiving its first new A321neo, although the carrier did operate A321s for a short interim period following its acquisition of GB Airways in 2008. “We are delighted to mark the delivery of our first A321neo. It will enable us deliver our strategy of securing and growing our number one positions at Europe’s leading and slot-constrained airports,” commented Johan Lundgren, CEO of easyJet. The first A321neo is now based at London Gatwick, offering rotations to Alicante, Malaga and Palma de Mallorca. Also in the narrow-body market, Airbus distributed one A319 last month, with it destined for Tibet Airlines. On a final note, Airbus’ archive shows that the manufacturer no longer delivers the A318, with the last delivery for the aircraft having been in 2013. 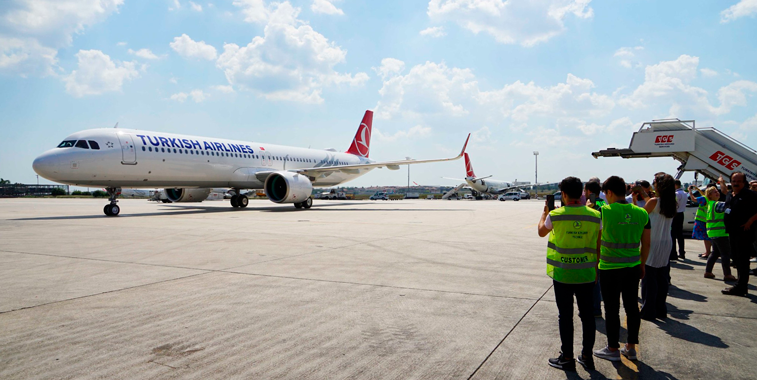 In July Turkish Airlines received its first A321neo, with the aircraft being greeted by airline staff members and media at Istanbul Atatürk. The airline presently has an order for 92 of the type, with the aircraft having already performed rotations from the Turkish mega-hub to Hamburg, Vienna, Brussels, Stuttgart, Munich, Copenhagen and Baku. 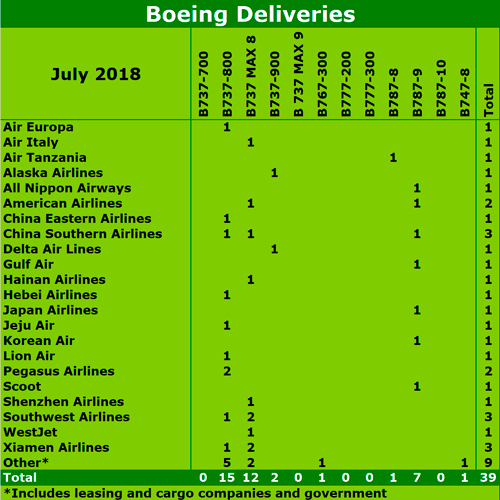 Boeing distributed only 39 aircraft in July, with this being broken down to 29 narrow-body and 10 wide-body aircraft. 22 airlines received direct deliveries from Boeing last month, with nine units also going to various cargo, leasing and government authorities. Among the delivery highlights for last month include Air Tanzania collecting its first 787-8, with anna.aero highlighting the top potential markets the carrier could deploy the aircraft on from Dar es Salaam.

The best performing aircraft for Boeing in July was its premier model, the 737-800, with 15 being handed over to various airlines around the world, with 12 737 MAX 8s also being collected. A total of eight 787s were also delivered, with the one -8 variant going to Air Tanzania, while seven -9 units went to seven separate carriers. With regards to other wide-bodies, one 747-8 went to a cargo operator. 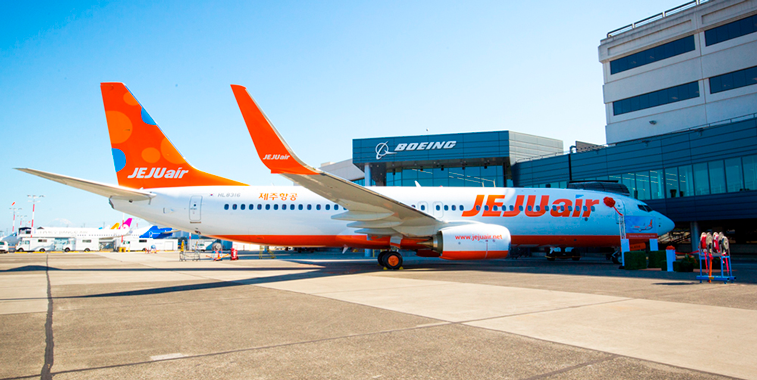 July was the month in which South Korean LCC Jeju Air collected its first 737-800 Next Generation unit, the first of three which the airline has on order with the US manufacturer. “This milestone delivery marks the beginning of a new era for Jeju Air as we continue to revolutionize Korea’s dynamic commercial aviation industry,” said Seok-Joo Lee, President and CEO of Jeju Air. “Owning and operating our own aircraft will further differentiate Jeju Air and our local competitors. We are fully prepared to introduce the type into our expanding fleet, and they will play an integral role in our growth strategy.” The carrier presently operates 36 older-variant 737-800s based on Flightradar24.com data.