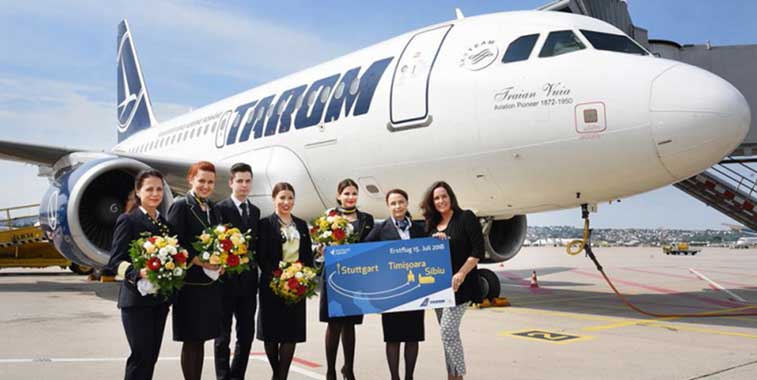 Stuttgart Airport welcomed 10.98 million passengers in 2017, a 3.1% increase over 2016 numbers. Schedules show that the share of overall capacity departing on international services has been growing, with foreign flights accounting for 70% of all seats in 2017. Tarom is a recent addition at Stuttgart, with the Romanian flag carrier launching services from Sibiu and Timisoara on 15 July. Welcoming the crew is Beate Nessel, Director Aviation Marketing for the German airport.

Stuttgart, a city in Baden-Württemberg, South West Germany, saw a growth in tourist numbers in 2017, with the local tourism board reporting a 2% increase in overnight stays last year compared to 2016. The city’s airport also enjoyed an increase in traffic, with passenger numbers up 3.1% in 2017. According to anna.aero’s European Airport Traffic Trends database, Stuttgart was the eighth busiest airport in Germany last year.

Stuttgart handled 9.93 million passengers in 2009 and by 2017 this had increased by 10% to 10.98 million. During this period the airport witnessed two year-on-year declines in traffic. The first and most significant drop in passenger numbers occurred in 2009 at the height of the global economic downturn, when traffic fell by 10% compared to 2008 levels. The next three years saw a gradual recovery, with an 8.9% increase in passengers from 2009 to 2012, before further cuts saw a 1.5% drop in traffic in 2013. Since then the airport has enjoyed four consecutive years of growth, with passenger numbers up by 14% from 2013 to 2017. The largest single year-on-year increase in traffic during this period took place in 2015, when passenger numbers grew by 8.2% 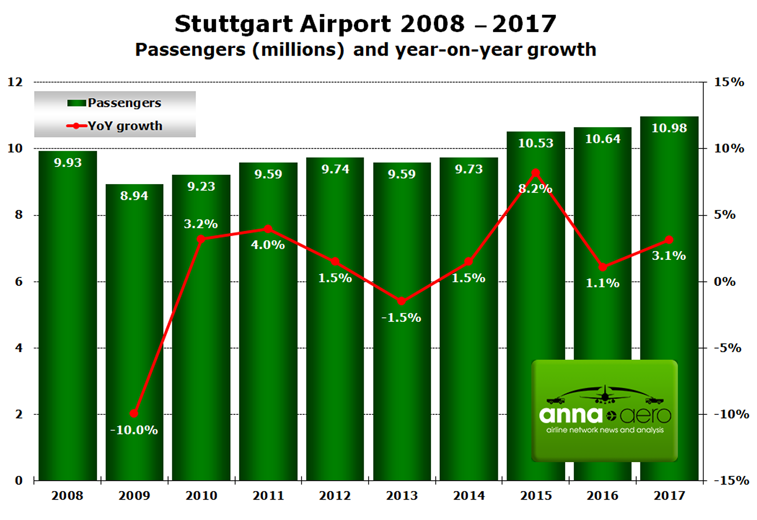 International services account for more of Stuttgart’s scheduled capacity than domestic links, and the percentage share of seats departing on foreign flights has increased in recent years. There were 4.12 million departing seats on international routes in 2008 and this had grown to 4.91 million by 2017, an increase of 19%. In contrast, the number of seats departing on domestic services has fallen over this period, dropping from 2.51 million in 2008 to 2.12 million last year. This represents a 15% decline in domestic capacity. As a consequence of these trends, the proportion of Stuttgart’s departing capacity operating on international services increased from 62% in 2008, to 70% last year.

Average capacity up by one-third

The average seat capacity across all flights departing from Stuttgart has increased every year between 2008 and 2017. In 2008, the average capacity was 108 seats per commercial movement, and by 2017 this had increased by 32% to 143 seats. Over the same period, the average capacity on domestic flights increased from 104 to 136 seats, while the average capacity on international departures rose from 111 seats to 147. A key element behind these trends is that a higher percentage of domestic and international capacity is being operated on larger narrow-body aircraft from Stuttgart, at the expense of regional jets or turboprops. In 2008 narrow-bodies operated 74% of the departing domestic seats, and by 2017 this market share had increased to 87%. Similarly, the share of seats operated by narrow-bodies on international flights grew from 69% to 84% over the same period. In both cases there was a decline in the number of seats offered on regional types. Wide-body aircraft only accounted for a small percentage of Stuttgart’s international capacity between 2008 and 2017. 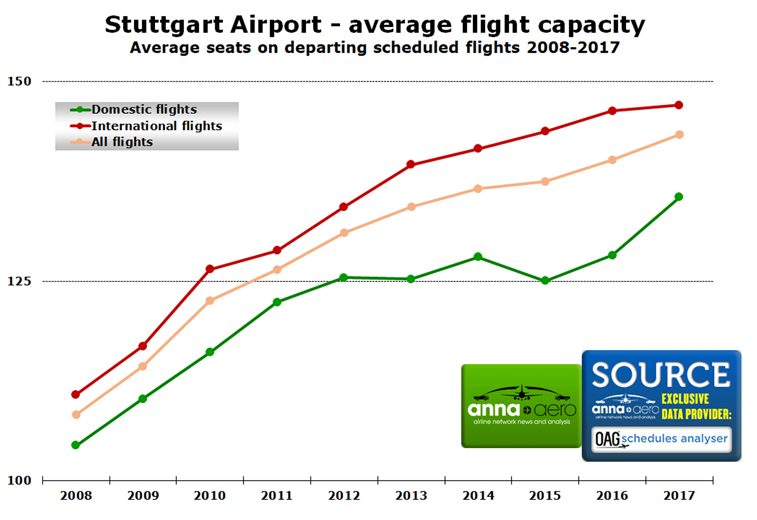 Eurowings in a league if its own

OAG data suggests that 45 different airlines will offer at least one scheduled service from Stuttgart during the week commencing 21 August. The airport’s top 12 carriers feature four German registered carriers. The largest operator by some distance is Eurowings, which accounts for about 40% of Stuttgart’s weekly departing seats in peak S18. The Lufthansa Group LCC will offer 499 weekly departures across 66 destinations, including nine domestic and 57 international connections. The largest internationally registered operator at Stuttgart is easyJet, which is also the third largest airline at the airport. It will offer flights to seven destinations during the week commencing 21 August. 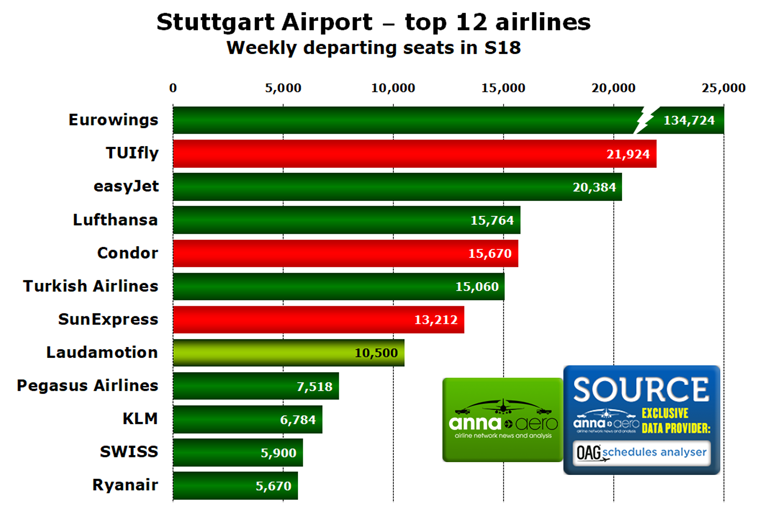 Stuttgart has lost two airlines from its departures board since S17, following the demise of airberlin and NIKI. All of airberlin’s previous routes are now operated by other carriers, including Eurowings and easyJet, while NIKI’s new incarnation, Laudamotion has picked up the former carrier’s link to Palma de Mallorca. Eight of the top 12 carriers have increased their capacity for peak S18, with the strongest growth coming from easyJet (up 232%) and Ryanair (150%). Some of the easyJet expansion can be explained by the LCC picking up capacity on the Berlin Tegel route when airberlin ceased operating. Eurowings has also added 18% more seats from Stuttgart when compared to the combined published capacity offered by Eurowings and Germanwings in peak S17. Three of the top 12 carriers have seen capacity cuts this summer (highlighted in red). The biggest cuts have come at Condor, with the Thomas Cook Group leisure carrier reducing its seat offering by 7.6%. Laudamotion (highlighted in light green) will offer 23% fewer seats from Stuttgart in S18 than its predecessor NIKI provided in S17.

According to OAG schedules, 121 destinations will be served by at least one scheduled flight from Stuttgart during the week commencing 21 August. This includes 12 domestic and 109 international links. Three of the top 12 destinations from Stuttgart are domestic while the other nine are international. The biggest single route in peak S18, based on weekly capacity, is Tegel, which has a narrow lead over Palma de Mallorca. The German capital connection is served by three carries, although SundAir only operates one flight per week, while Eurowings and easyJet offer multiple daily rotations. The combined daily frequencies on this route vary from 12 to 19 depending on the day of week. The largest international link is to the holiday hotspot of Palma de Mallorca, with the Spanish connection served by eight different carriers during the week commencing 21 August. The longest scheduled sector from Stuttgart in peak S18 is the 7,512-kilometre connection to Atlanta, which is operated daily by Delta Air Lines throughout the summer season. It is currently the German airport’s only scheduled transatlantic route. The shortest connection from Stuttgart is the 145-kilometre hop to Zurich, with 34 weekly flights on offer with SWISS. 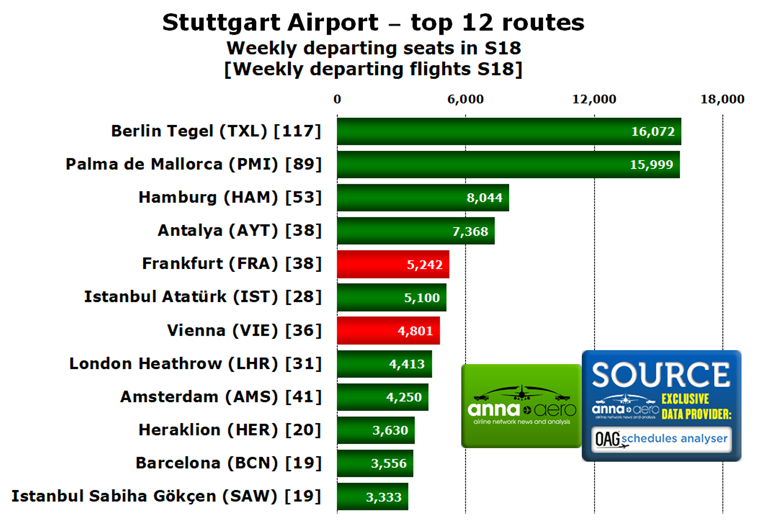 Three of the nine international routes in the top 12 table serve Turkish destinations, with Istanbul the only city featuring twice, with its Atatürk and Sabiha Gökçenin airports in sixth and 12th position respectively. There are also two destinations in Spain, and one in Greece, plus capital connections in Austria, the UK and the Netherlands. The largest international country markets served by Stuttgart in peak S18 are Spain and Turkey.

Most of Stuttgart’s top 12 routes have enjoyed an increase in capacity for peak S18, compared to the equivalent period last year. The strongest growth has come on services to Palma de Mallorca (up 23%). Only two of the top ranked routes (highlighted in red) have witnessed capacity cuts compared to S17. The most significant of these have come on the Vienna link which will see 6.0% fewer weekly seats this year.

According to anna.aero’s New Routes database, 23 new services have already been launched to or from Stuttgart in 2018 and four more are scheduled to start before the end of the year. airBaltic has also announced that it will introduce a new four times weekly connection from its Riga hub commencing on 31 March 2019. 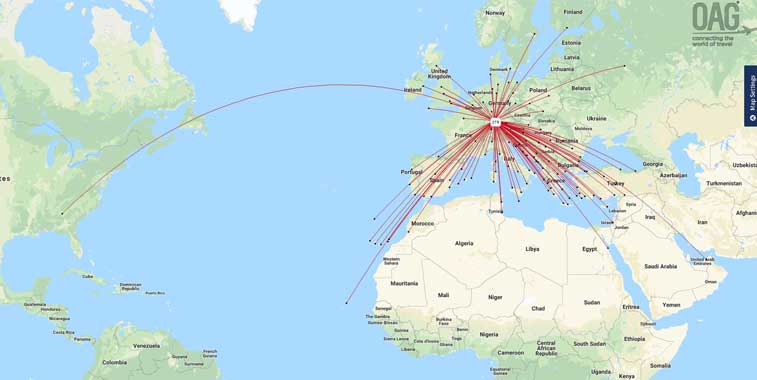 Stuttgart’s scheduled route map for the week commencing 21 August demonstrates that is well connected in the domestic market and in terms of its links to Europe. It’s longest scheduled connection is the 7,512-kilometre connection to Atlanta, which is operated daily by Delta Air Lines throughout the summer season and is currently the German airport’s only scheduled transatlantic route.