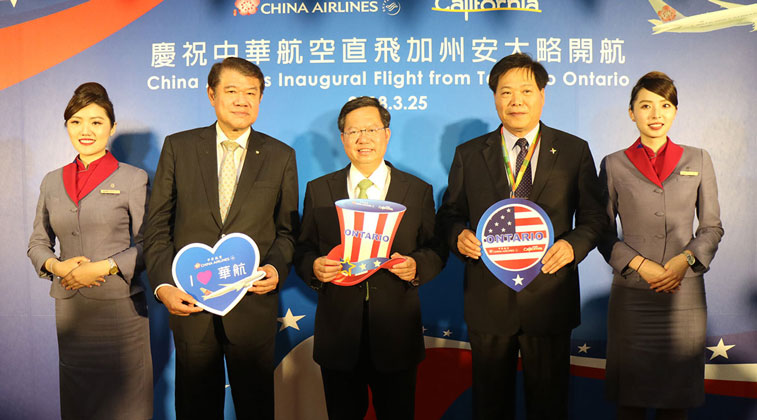 China Airlines launched daily flights between Taipei Taoyuan and Ontario in California on 25 March. Pictured at the launch are: Nuan-Hsuan Ho, Chairman, China Airlines; Cheng Wen-tsan, Mayor of Taoyuan City; and Deng-Ke Shiau, President, Taoyuan International Airport Corporation. The route is presently the only long-haul service flown from Ontario Airport, and between its launch and the end of May, the service carried 28,961 passengers.

Ontario Airport is situated 63 kilometres to the east of downtown Los Angeles, roughly a 36-minute drive if there is no traffic. In terms of road infrastructure, this places it only 10 minutes further away from downtown LA than Los Angeles’ LAX Airport. It also places Ontario within the journey time of downtown LA as Long Beach Airport in the southern part of the Los Angeles basin, a megalopolis that is home to around 18 million people, translating to 5.5% of the US population. Ontario appears to be an airport that is on the move, not only for its core catchment, put also the major population that it serves, with the level of growth from the airport continuing to accelerate.

During the first three months of this year, Ontario handled just over 1.14 million passengers, up 10% (103,853 more passengers) from the 1.04 million it handled during the same period of 2017. This growth trend continued after this period, with April seeing just under a 13% spike in traffic, while May recorded a 12% rise in passenger numbers. It means that for the first five months of this year, Ontario Airport has welcomed just under two million passengers, up 11% versus the first five months of 2017. 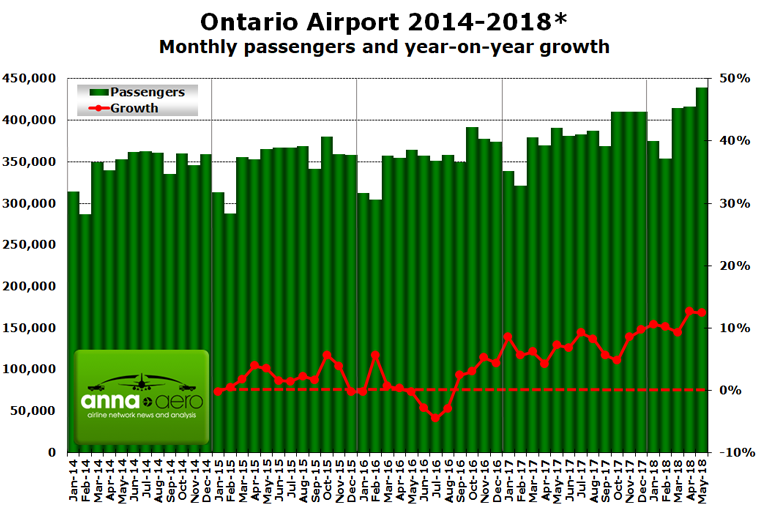 Overall last year the Californian facility hosted 4.55 million guests, up 7.1% from the 4.25 million it processed during 2016. If the 11% growth rate achieved for the first five months of this year is maintained for the remainder of 2018, Ontario will push over the five million passenger barrier.

When taking Ontario’s monthly passenger statistics for 2017 and placing them into anna.aero’s Seasonal Variation In Demand (SVID) calculator, the airport performs well, generating a score of 0.58 – an ‘Excellent’ rating. Despite the growth in passenger traffic from the airport, the seasonality has not been too dampened, with the result for last year down from 0.54 in 2016, also an ‘Excellent’ rating.

Frontier Airlines new in 2017; China Airlines and JetBlue new in 2018

Southwest Airlines is the largest operator from Ontario, transporting just under 2.54 million passengers from the airport in 2017. This means that the low-cost operator accounted for just under 56% of the airport’s total traffic last year. The airline increased its individual passenger numbers by 5.0% in 2017, however its market share fell by 1.1 percentage points, a result of stronger growth from other airlines. American Airlines, which flew over 888,000 passengers from Ontario last year, increased its traffic count by 7.9%, while maintaining a market share of 19%. The biggest market share gain though was reported by United Airlines, with the Star Alliance member seeing its traffic jump 22%, resulting in its market share growing by 1.1 percentage points, going from 7.9% in 2016 to 9.0% last year. One factor which allowed the airline to achieve was the use of larger aircraft out of Ontario. 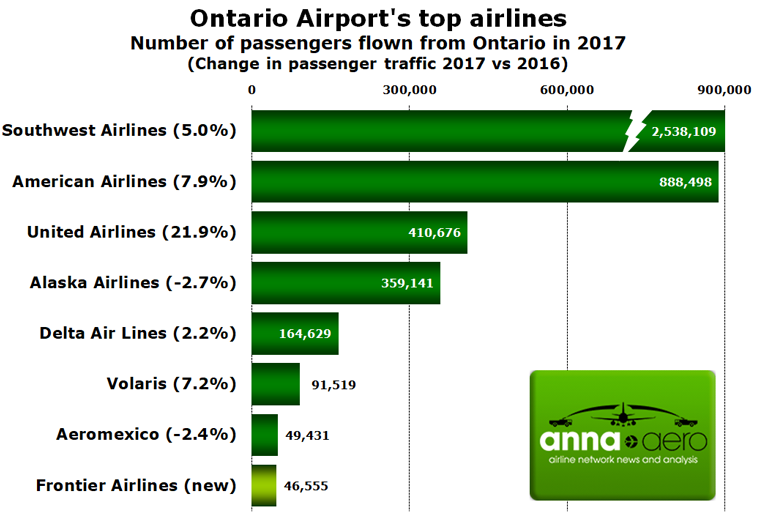 In October last year Ontario welcomed the arrival of Frontier Airlines (highlighted in light green), with the ULCC launching services to the airport from Austin, Denver and San Antonio. Between its inaugural service to the Californian city on 12 October, and 31 December, the carrier transported 46,555 passengers. Between January and May this year, the ULCC has transported 83,747 travellers, so during its first eight months at the airport, Frontier has carried 130,302 passengers. The airline has recently added its fourth route to Ontario, launching a daily service from Orlando on 13 August.

While Frontier is new to the airport, one airline which has stopped serving Ontario is Aeromexico, having pulled its five times weekly service from Guadalajara in January. However the route is still served by Volaris. Despite the loss of Aeromexico, two new carriers are gracing Ontario in 2018. The first was China Airlines, which commenced a daily 777-300 service from Taipei Taoyuan on 25 March, while from 5 September JetBlue Airways is scheduled to begin a daily A320-operated rotation from New York JFK. With the arrival of China Airlines, Ontario becomes the only other airport in the Los Angeles area after LAX to support long-haul services. Between its launch on 25 March and the end of May, the long distance link carried 28,961 passengers.

Ontario Airport’s top route this summer is Phoenix, with 75 weekly departures being offered in the w/c 21 August 2018, up from 70 departures during the same week last year, with Southwest and American both adding extra flights. Following Phoenix, the top four routes from Ontario include Oakland, Sacramento and San Francisco, all inter-state routes, while Dallas/Fort Worth is placed fifth. Denver has climbed up the rankings to take sixth place this summer, a result of Frontier beginning flights on the sector from Colorado. One airport showing a drop in weekly flights is Guadalajara, a result of Aeromexico withdrawing services. 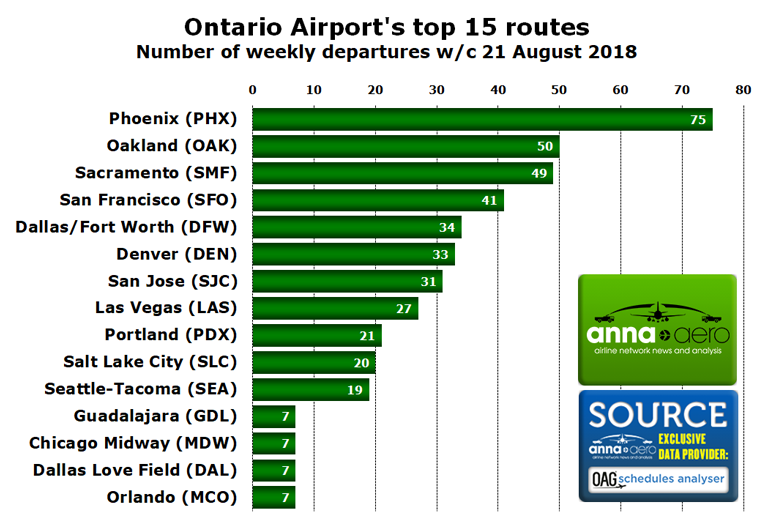 A new destination among Ontario’s top 15 is Orlando, one of five new routes to join the former airport’s route map this summer, with the others being Austin, New York JFK, San Antonio and Taipei Taoyuan. Overall in the week analysed, 441 scheduled commercial departures will be offered from Ontario, up 7.6% versus the same week last year, with 65% of these additional departures being on routes to new destinations this summer. 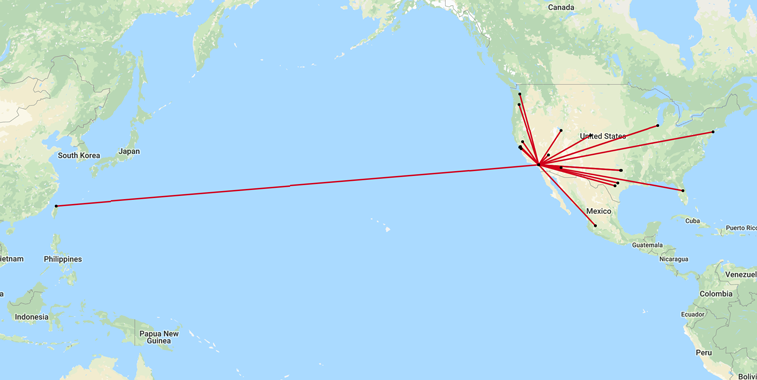 Ontario Airport became a long-haul gateway in March when it welcomed China Airlines’ inaugural service from Taipei Taoyuan. The Big Apple makes a return to the departures board in September when JetBlue Airways begins daily flights from New York JFK. Overall this summer, the number of weekly departures from Ontario has increased by 7.6%, with roughly 65% of these additional departures being on new routes.