Regional Express enjoys third consecutive year of growth in 2017; Sydney is leading airport out of 59 served in S18 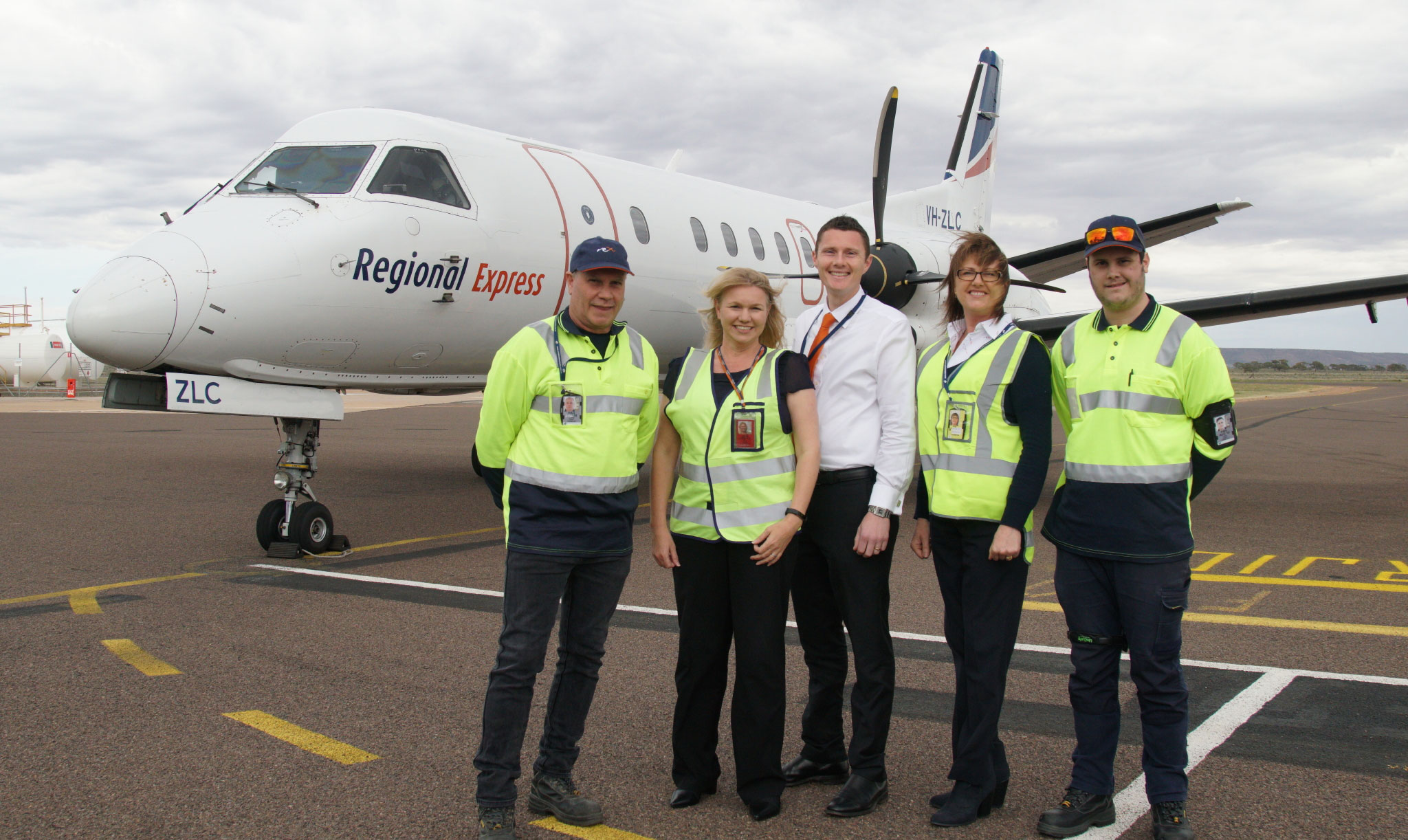 Regional Express (Rex) was the fifth largest provider of domestic capacity in Australia in 2017 and operates a fleet of more than 50 Saab 340s. The airline was awarded the route licence to operate passenger air services between Port Augusta and Adelaide after the previous operator exited the route in May 2017. At the launch on 11 September last year, Port Augusta ground staff posed with Rex Sales Manager South Australia Kylie Good (second from left) and Port Augusta Mayor Sam Johnson (middle).

Regional Express (Rex) is a regional Australian operator focused purely on domestic flying in its home market. Rex may mean king in Latin, but it’s Qantas that wears the crown as the largest provider of domestic seats. However regional turboprop operator Rex is a major player in the Australian market and was the fifth largest provider of domestic capacity in 2017, behind Qantas, Virgin Australia, Jetstar Airways and Tigerair Australia. It should be noted that Rex is the only all-turboprop operator among these carrier’s and that it displaces Tigerair Australia to claim fourth spot when the carriers are measured in terms of the number of domestic flights offered in 2017, rather than the sum of seats. According to ch-aviation Rex’s current single-type fleet consists of 52 active Saab 340s plus one inactive aircraft.

ASKs on the up

Rex has seen three consecutive years of growth in terms of available seat kilometres (ASKs) across its non-stop network. This follows a five-year period of relatively flat growth. From 2010 to 2015, the airline’s annual ASKs only increased by 0.3%, with this period encapsulated by marginal year-on-year increases or cuts of less than 1.0%. From 2015 to 2017 the carrier’s ASKs jumped up by 12%, thanks largely to an 11% boost in 2016. 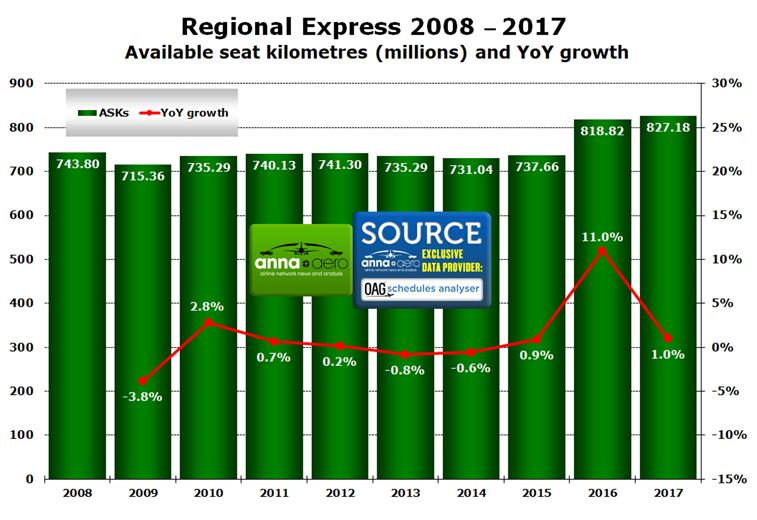 The available two-way capacity on all direct Rex services increased from 2.12 million in 2008 to 2.48 million in 2017. This represents a 17% increase in available seats over the period. There were three year-on-year declines in capacity across the airline’s network between 2008 and 2017, with these taking place in 2009, 2013 and 2014. The largest cuts were still relatively marginal at 1.3% in 2009, and corresponded with the height of the global recession. There were six year-on-year increases in capacity between 2008 and 2017, with the largest single 12 month growth spurt taking place in 2016 when seat numbers rose by 10.3%.

According to OAG data, Rex will offer direct scheduled services from 59 Australian airports during the week commencing 21 August. Each of these airports will see at least two Rex departures per week during the peak summer period. The carrier’s top 12 airports, based on weekly departing seats in peak S18, include four of the five busiest airports in Australia, based on passenger numbers in 2017: Sydney (biggest Australian airport), Adelaide (fifth), Melbourne (second) and Perth (fourth) make up the top four departure points in the Rex network this summer. Brisbane was the only large hub missing from the top 12. Sydney is the largest airport on the airline’s departures board in peak S18, accounting for 20% of its total non-stop capacity. Rex will serve 18 direct destinations from Sydney during the week commencing 21 August, offering 285 combined departures. Its busiest route from Australia’s largest hub, is the 365-kilometre connection to Wagga Wagga, also in New South Wales, which it serves with 32 weekly flights. 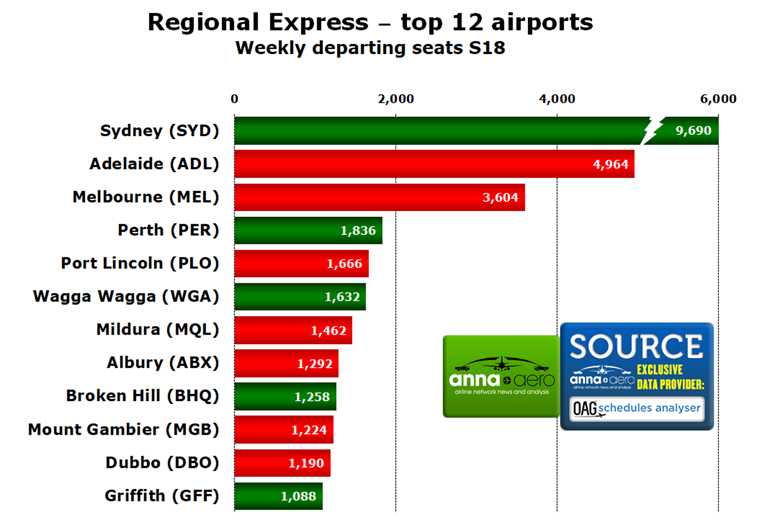 Five of Rex’s top 12 airports witnessed an increase in weekly capacity from the airline for S18, compared to the equivalent period last year (highlighted in green). The strongest growth has taken place at Perth with weekly seat numbers on non-stop services up 32%. This was mainly due to the airline introducing two new direct connections to Carnarvon and Monkey Mia from the Western Australia hub since last summer. Seven of the top 12 airports have seen a decline in capacity from Rex (highlighted in red). The biggest cuts have come at Mount Gambier and Albury, where departing weekly seat numbers were down 12% and 9.5% respectively compared to peak S17.

Here at anna.aero we typically like to highlight top 12s – an airline’s top 12 airports or country markets for example. In this case we have identified the top 16 direct Rex routes, since six of them have exactly the same weekly frequencies and capacity this summer. Is noticeable that all 16 routes involve links from secondary or tertiary regional airports to four of Australia’s top five facilities: Sydney, Melbourne, Perth and Adelaide. Sydney alone features in nine of the carrier’s top 16 links, with three serving Adelaide, and two each linking to Melbourne and Perth. The largest single non-stop connection in the Rex network is the link from Adelaide to Port Lincoln. This route is operated 49 times weekly in peak S18 according to OAG schedules, with between five and eight daily rotations depending on the day of week. 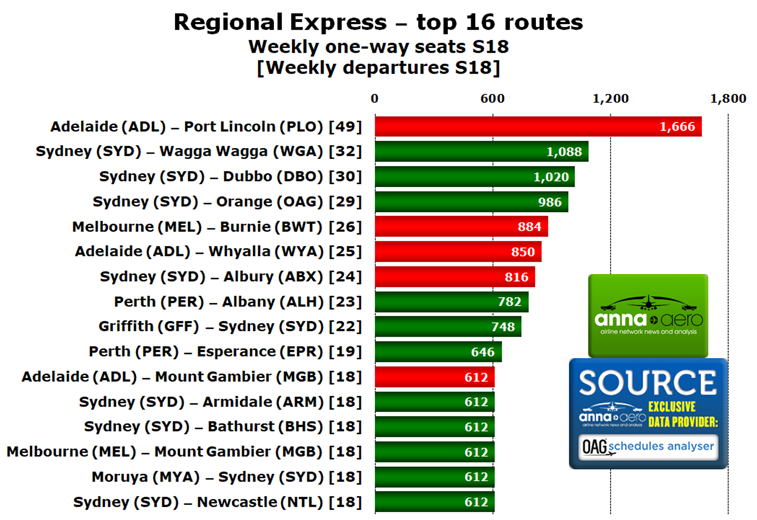 The majority of Rex’s top-ranked non-stop routes have seen an increase or no change in weekly capacity since peak S17. The largest boost in direct seats has come on the Moruya – Sydney sector with Rex increasing its weekly frequencies from 12 to 18, and subsequently adding 50% more capacity. Five of the top 16 routes have seen a decline in weekly seat numbers since last summer (highlighted in red). The biggest decline has come on the Adelaide – Mount Gambier link, with a cut in weekly flights from 23 to 18 and a corresponding 22% drop in capacity.

It should be noted that only direct, non-stop routes have been included in the analysis. As a regional carrier serving some remote communities, Rex also operates a number of multi-stop itineraries. As an example, the carrier operates 18 direct flights per week from Moruya to Sydney in peak S18, but only offers 12 non-stop connections in the opposite direction. This is because it also operates six flights from Sydney to Moruya via Merimbula. A number of Rex’ direct airport pairs subsequently form just one part of larger itineraries. 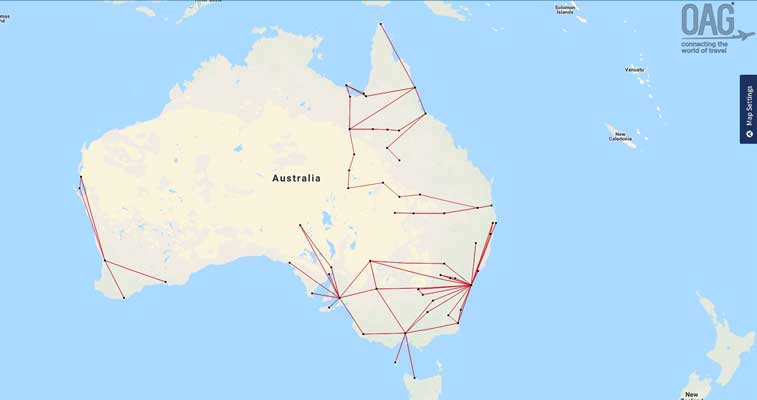 OAG schedules show that Rex will serve 59 Australian airports with at least two departures during the week commencing 21 August. Sydney is its largest operating airport with 285 weekly departures this summer. As a regional carrier serving remote communities, Rex operates a number of multi-stop services. Some of its direct airport pairs are subsequently just one part of a larger itinerary.