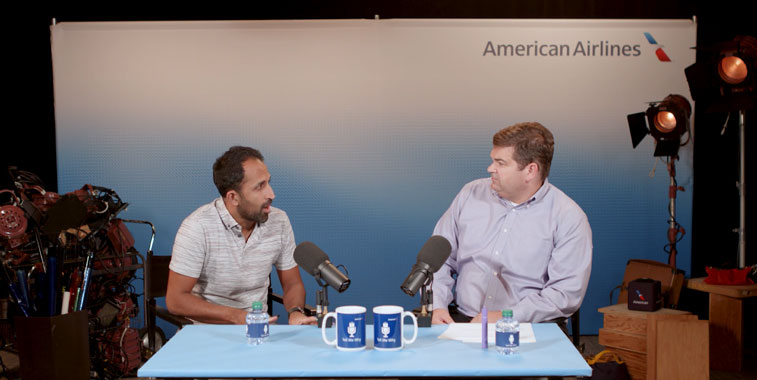 American Airlines announced changes to its transatlantic flying programme for S19 on 21 August, with the oneworld member confirming that it will add nine new routes, while also cutting six existing services from its schedules. Vasu Raja, VP Network and Schedule Planning, American Airlines, sat down with Ron DeFeo, VP Global Communications, American Airlines, to discuss its network changes in the latest episode of Tell Me Why.

American Airlines announced on 21 August that for S19 it will be restructuring its transatlantic network. Before going into the details of next year’s plans, here is a quick brief on the airline’s operations in the transatlantic market this summer season. In S18 the oneworld carrier offered 54 routes between the US and Europe, up from 52 routes in S17. This summer saw five new routes being added across the Atlantic, with Philadelphia gaining new services to Budapest, Prague and Zurich, Chicago O’Hare seeing Venice Marco Polo introduced, plus Dallas/Fort Worth hosting the airline’s first flights to Reykjavik/Keflavik. Lost routes this summer included New York JFK to Manchester and Zurich (replaced by Philadelphia), plus Boston to Paris CDG.

For S19, the airline has confirmed it will add nine new transatlantic services, with six being chopped. If these are to be the only schedule changes for next summer, American will offer 57 transatlantic routes during S19, a net increase of three sectors when compared to the present season.

Of the nine new routes in S19, four are being added from Philadelphia, with two from Dallas/Fort Worth, and one each from Chicago O’Hare, Charlotte Douglas and Phoenix, with the latter being a new node to the carrier’s transatlantic operation. “This announcement is a reflection of the strength of the Phoenix economy, and one that only promises to make it stronger,” said Phoenix Mayor Thelda Williams of the announcement that American will add flights to London Heathrow in March 2019 from the Arizona city. “This has been many years in the making, and I want to thank the oneworld alliance, American Airlines and the City of Phoenix team for working together to turn it into a reality.” Of the routes being started in S19, three result in the introduction of new airports to American’s route map, with Berlin Tegel, Bologna and Dubrovnik being served, with the latter also meaning Croatia is added to the carrier’s network. It should be noted that of the routes below, only the one from Charlotte Douglas to Munich is scheduled to operate on a year-round basis.

“By providing the only non-stop service from North America to Bologna and Dubrovnik and adding Berlin to our international footprint, American is making it easier to see the world,” said Vasu Raja, VP Network and Schedule Planning, American Airlines. “Through our Atlantic Joint Business, we have seen increased interest to these markets from the US, and adjusting our network to introduce these destinations will provide more choices for customers on both sides of the Atlantic.” While Bologna and Dubrovnik become the latest airports in Europe to welcome scheduled transatlantic service, Berlin Tegel is already served throughout the summer season by Delta Air Lines which serves the German capital from New York JFK. According to OAG Traffic Analyser data, an estimated 177,000 passengers travelled indirectly between Bologna and the US in 2017, while some 55,300 people travelled between Dubrovnik and the US last year.

It should be noted that the carrier’s proposed service from Philadelphia to Edinburgh compensates for the loss of the airline’s route from the US city to Glasgow, while the airline is planning to also end its route from New York JFK to the Scottish capital. Also to be noted is that the route from Charlotte Douglas to Munich will replace America’s existing route from Philadelphia to the German city. A breakdown of the routes being cut from the schedules are shown in the table below, with it also highlighting that the city of Glasgow will no longer be served by the airline in 2019.

The routes being cut from American’s network were responsible for over 521,000 of the airline’s 6.78 million seats across the Atlantic in S18, accounting for 7.7% of the carrier’s capacity between Europe and the US. However the new services will replace this capacity and more (explained in more detail below).

Transatlantic capacity to grow 3.1% in S19

Despite the routes being culled accounting for over half a million seats, the new city pairs being added to the airline’s flying programme in S19 will account for over 731,000 two-way seats. With that, anna.aero has forecast that the oneworld member’s overall capacity between the US and Europe will grow by roughly 3.1% next summer, a result of just under 210,000 net seats being added to American’s transatlantic schedules. This calculation is also based on other routes remaining at the same capacity next summer. Despite the rise in seats, it is likely that American will fall just short of seven million seats in S19 (highlighted in light green below). 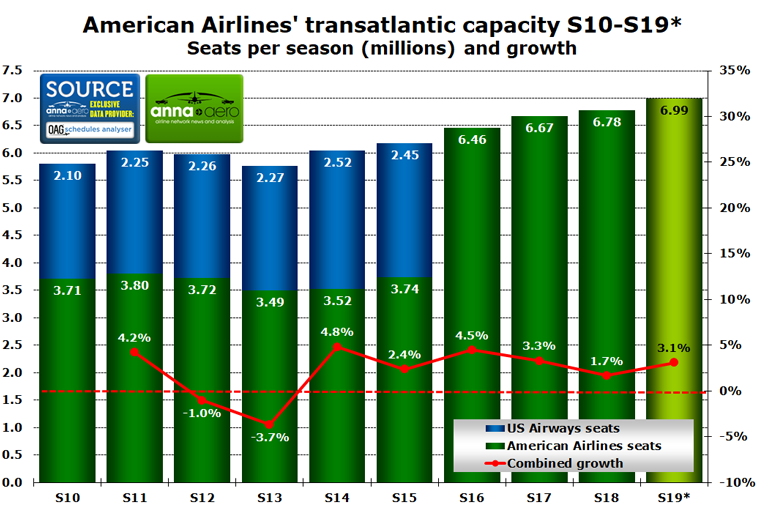 With American scheduled to offer just under seven million seats between the US and Europe next summer, up by an estimated 3.1% versus S19, it will still mean that the airline is likely to remain the third largest operator in the transatlantic market next summer. Delta is presently the leading carrier for seats between the two markets (3.97 million one-way seats in S18), followed by United Airlines (3.46 million). However, when you take into account the support of British Airways, a oneworld alliance partner alongside American, the two combined offered 6.35 million one-way seats in S18, an offering that is 13% larger than Delta’s, with this result taking into account the latter’s partnership with Virgin Atlantic Airways (1.64 million). 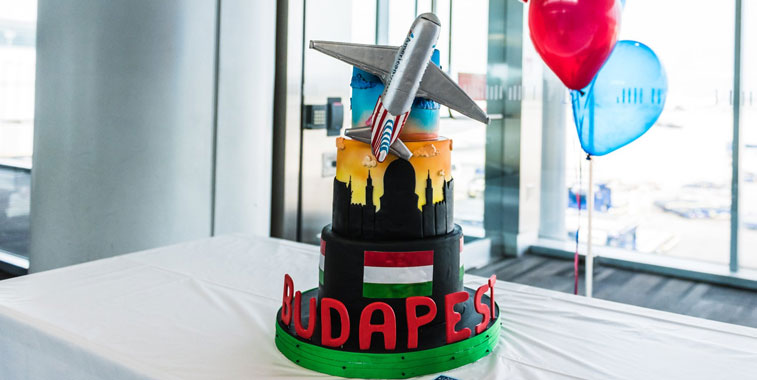