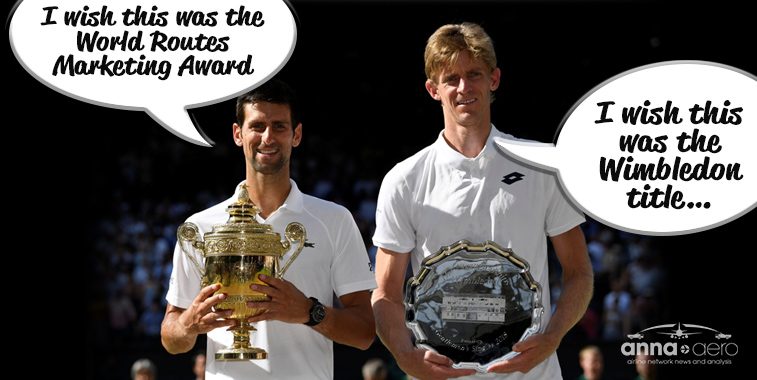 While Novak Djokovic has already accumulated four Wimbledon titles, we are sure that he would much rather win one of the prestigious World Routes Marketing Awards to add another string to his racket. Unless his hometown airport in Belgrade is renamed after him (it was named in 2006 after Serbian scientist and inventor Nikola Tesla), Djokovic can’t enter these airport marketing awards, so the title will have to go to one of the six genuine contenders, Adelaide, Amman, Budapest, Nuremberg, Portland and Prague, some of which spoke this week to anna.aero.

In a series of features leading up to this year’s World Routes Marketing Awards, taking place at the event in Guangzhou on Monday 17 September, anna.aero is speaking to the nominess of this year’s awards to discuss what it means to be nominated for the title, and the recognition that comes with it. Having looked at the five airports nominated in the ‘Under 4 million’ category last week, attention this week has turned to the six facilities that are up for the title in the ‘4-20 million’ category, namely Adelaide, Amman, Budapest, Nuremberg, Portland and Prague airports. 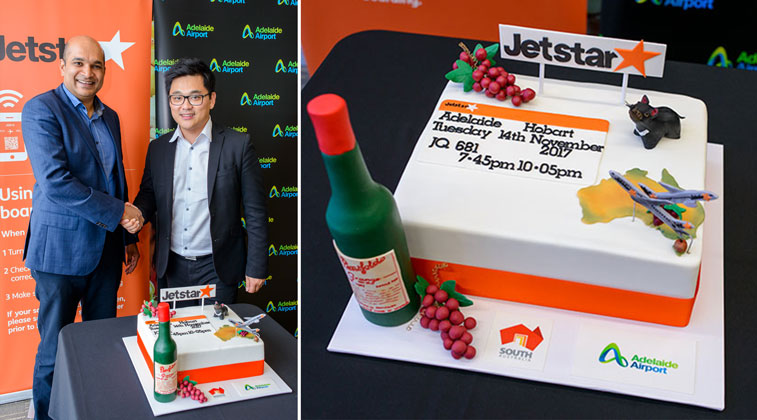 Speaking to anna.aero about the airport’s recognition in the ‘4-20 million’ category, Jonathan Cheong, Head of Aviation Business Development, Adelaide Airport, who is also nominated for the ‘Individual Award for Outstanding Contribution to Route Development’, said: “I am excited that Adelaide Airport has been shortlisted in the 4-20 million passenger category for the World Routes 2018 Marketing Award, and I am humbled with the individual award nomination. In the year ending June 2018, more than one million international passengers passed through Adelaide Airport – the first time this milestone has been reached. Over the last 12 months, we have welcomed the introduction of Fiji Airways (Nadi), Jetstar Airways (Hobart), FlyPelican (Newcastle), QantasLink (Kangaroo Island); Air New Zealand upgauging from A320s to its 787s; and increased capacity from Qatar Airways, Cathay Pacific Airways and Malaysia Airlines. We thank our great airline partners for introducing new services and adding capacity to our market. This is truly appreciated. We would also thank our partners; South Australian Tourism Commission and Tourism Australia for their contribution which allowed us to experience these successes.” 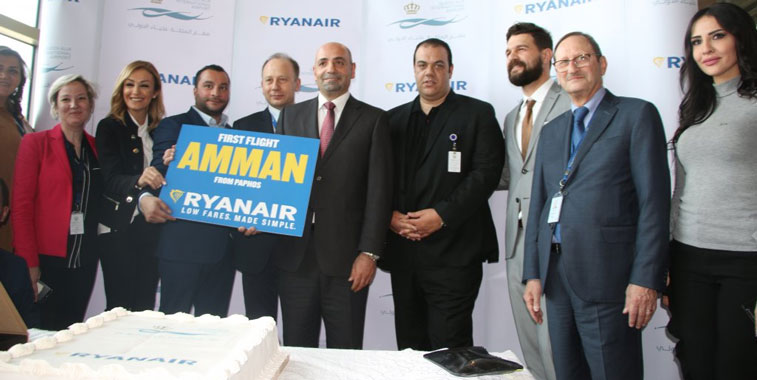 Ryanair launched its first flight to Amman’s Queen Alia International Airport from Paphos on 27 March, with the carrier planning to add a further nine routes to the Jordan airport at the start of the W18/19 season. Along with Ryanair, Amman has recently welcomed the arrival of Norwegian services from Copenhagen, while Laudamotion will begin flights in October from Vienna. Last year the airport handled over 7.91 million passengers, up 6.8% versus 2016.

Amman’s Queen Alia International Airport is the leading international gateway to Jordan, and it has encountered many route successes in the past year, with service additions helping the Middle Eastern airport see its passenger numbers grow 6.8% in 2017 to reach 7.91 million passengers, with this comparing to 7.41 million passengers in 2016. This combination has lead the airport to be nominated in the ‘4-20 million’ category at this year’s World Routes Marketing Awards. The biggest development for the airport this year was the arrival of Ryanair. On 27 March the ULCC commenced flights from Paphos, while from the start of the W18/19 season it will begin services from Bologna, Brussels, Bucharest, Budapest, Krakow, Milan Bergamo, Prague, Vilnius and Warsaw Modlin. Along with the arrival of Europe’s largest low-cost operator, fellow LCC Norwegian recently launched services to Amman from Copenhagen, a route that has also been launched by Royal Jordanian Airlines. Other route developments to occur in 2018 include Fly Baghdad launching flights from the Iraqi capital, Jordan Aviation resuming services to Kuwait City after a two-year hiatus, plus Pegasus Airlines introducing flights from Izmir. 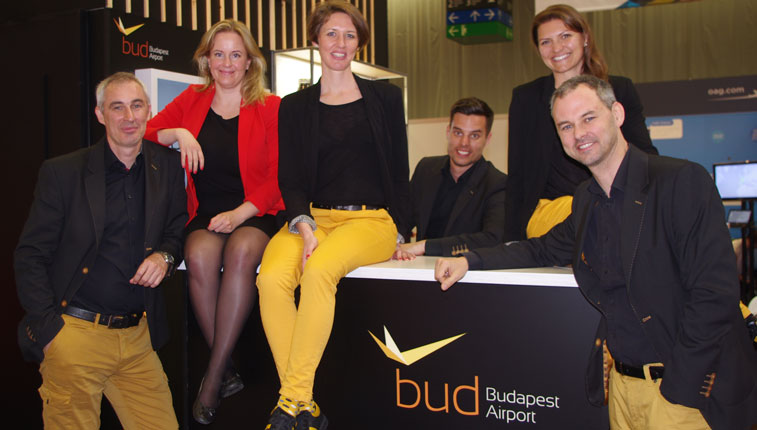 Budapest Airport claimed victory in the ‘4-20 million’ passenger category at this year’s Routes Europe back in April, with the airport hoping to collect the title again at this year’s global event in Guangzhou. Speaking to anna.aero ahead of this year’s conference in China, Balázs Bogáts, Head of Airline Development. Budapest Airport, said of its nomination: “Being the category winner at the Routes Europe Marketing Award in 2018 means a lot to us. No doubt, that it feels extraordinary, when your airline partners believe, that the way of business at BUD should be considered as a benchmark in Europe. Therefore, being nominated for this year’s World Routes Marketing Award is another precious piece of feedback for us, that we are on the right track when it comes to supporting our airline partners in terms of innovative marketing solutions, in-depth research and integrated market evaluation.” Adding further on the plans and projections for the Hungarian gateway, Bogáts commented: “This year we aim to reach 15 million passengers at BUD, which is 50% more than the population of Hungary, and nearly five million more passengers versus the traffic levels of 2015. Our traffic has grown in 58 consecutive months since December 2013. In the centre of our professional attention, we will continue to closely cooperate with key tourism and business stakeholders to identify and minimise the risk of our new and developing airline partners.”

These guys are no sharks – Nuremberg Airport 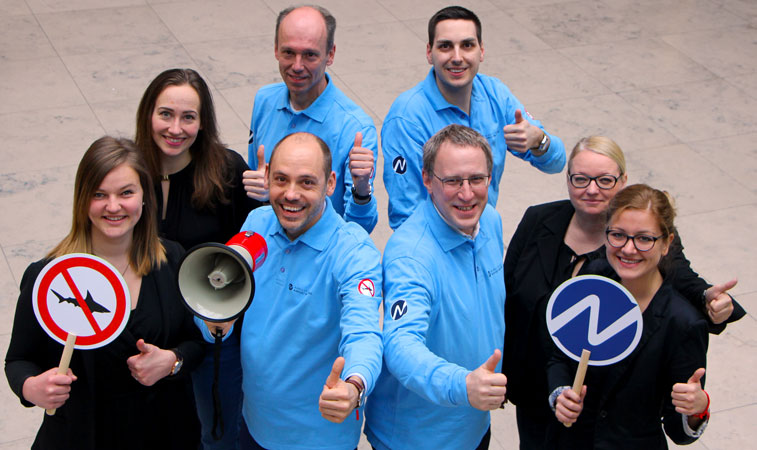 Speaking to anna.aero before this year’s awards, Christian Käser, Head of Aviation Marketing & Business Development, Nuremberg Airport, said of the German gateway’s latest nomination: “After winning the World Routes Award 2017 in the smallest category, Nuremberg Airport set a new passenger record (4.2 million in 2017; 20.1% growth versus 2016) and we now find ourselves nominated in the ‘4-20 million’ passengers category. We are one of the smallest airports in the category, but we are used to that. Nuremberg wins its battles by adopting suitable strategies and playing to our strengths, using our size to act with agility and foster a personal atmosphere. The airport’s success is down to three factors: a radical Blue Ocean approach to developing new markets; a redefined role for the sales and marketing team to improve contact with airlines; and innovative execution of both B2B measures and B2C measures in cooperation with these partners. Growth of 36% over the last four years, despite the recent insolvency of our former main airline partner, airberlin, is testament to the efficacy of our marketing campaigns. Connectivity has also increased significantly to an all-time high of 68 non-stop destinations in 2018 (nine new destinations in 2018, after +18 in 2017).”

US airport wants to say ‘aloha’ to an award – Portland Airport 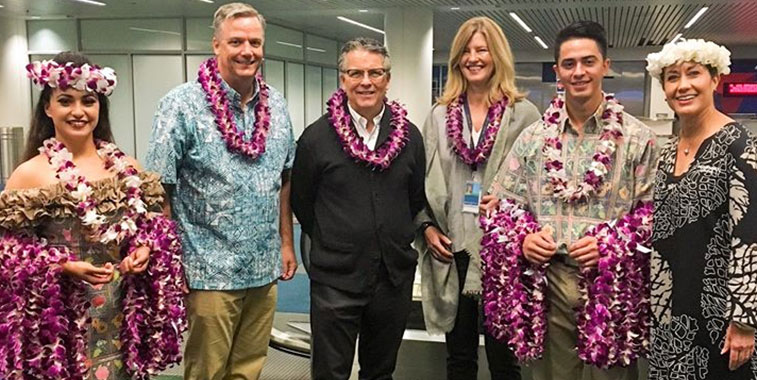 Portland Airport greeted Hawaiian Airlines’ inaugural service between Kahului on 18 January, with among those at the launch being Brent Overbeek, VP – Network Planning and Revenue Management at Hawaiian Airlines (second left). Portland Airport passed the 19 million passenger barrier in 2017, with the number of travellers using the airport rising from 18.35 million in 2016 to 19.08 million last year.

In 2017 Portland Airport passed the 19 million passenger barrier, seeing its passenger numbers climb 4.0% from 18.35 to 19.08 million. The airport has seen traffic levels surge in recent years, with the number of people passing through the airport having grown 45% since 2010, a year when Portland greeted 13.19 million travellers. Among the airport’s big route launch highlights this year is Hawaiian Airlines, which commenced flights from Kahului on 18 January, adding to its existing daily service from Honolulu. Also added to the airport’s departure boards this year is Frontier Airlines’ new link from Austin, while Sun Country Airlines has added seasonal Orlando flights, and will soon begin seasonal services to Honolulu, Las Vegas, Phoenix, Palm Springs and Reno-Tahoe for the winter season, with these six destinations joining the carrier’s existing service to Portland from Minneapolis-St. Paul. 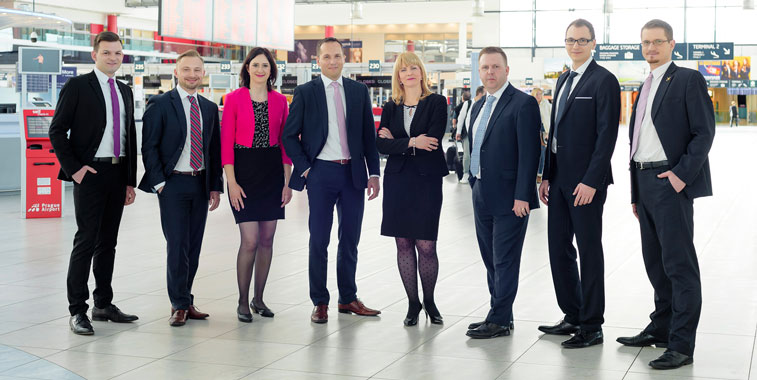 Speaking on behalf of Prague Airport about its nomination in the ‘4-20 million’ category ahead of this year’s World Routes Marketing Awards ceremony in Guangzhou, Jiří Vyskoč, Director of Aviation Business, said: “Prague Airport is honoured to be shortlisted for the World Routes Marketing Awards. The fact that experts from around the world voted for us confirms we are doing our job right.” Among the biggest achievements recently accomplished at Prague, it highlights the record of 15 million passengers in 2017 (+17.9%). As for route development, the airport can mention the launch of flights to Philadelphia with American Airlines and Xi’an courtesy of China Eastern Airlines, plus a range of new routes by other carriers, alongside the second daily frequencies added by Qatar Airways from Doha and Emirates from Dubai. “Moreover, we have managed to extend our cooperation with the national tourism organisations to support the incoming tourism to Prague and the Czech Republic. Our route development team has extended its business activities in Europe, America and Asia aiming at further network expansion and at bringing new market opportunities to Prague and the Czech Republic. We want Prague to remain closer than you think,” adds Vyskoč.

The winners of the World Routes Marketing Awards 2018 will be announced at the conference in Guangzhou on 17 September, with either Adelaide, Amman, Budapest, Nuremberg, Portland and Prague among the winners. Along with the ‘4-20 million’ category, a further five awards will also be presented on the night, with the nominees in these categories sharing their views with anna.aero over the coming weeks leading up to the event next month.