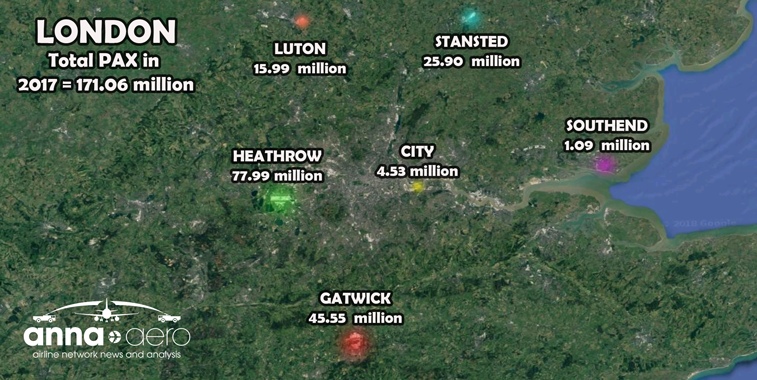 London’s airports handled 171.06 million passengers in 2017, up from 127.17 million in 2010, meaning that the number of people flying from the UK capital increased by 35%. The airport which has experienced the biggest net gain in passengers is Gatwick, with it handling 14.21 million more passengers last year than it did in 2010. Another accolade for Gatwick is that it is the only airport which can claim that it is served by London’s top five airlines, namely British Airways, easyJet, Ryanair, Wizz Air and Norwegian respectively.

London is arguably the largest commercial aviation city in the world, with it being served by six commercial airports, namely Heathrow, Gatwick, Stansted, Luton, City and Southend. UK airports in 2017 reported 284.57 million passengers passing through its terminals, with London’s airports being responsible for 60% of this traffic. Back in 2012, the UK saw 220.64 million passengers flying from its airports, with London that year accounting for 61% of traffic. While its market share has evidently dropped, the number of people flying through the UK capital’s airports is soaring.

London’s airports processed 171.06 million passengers in 2017, up from 127.10 million in 2010, the low-point after the 2007 global economic crisis. The represents an increase in annual traffic through London’s leading commercial airports of 35%. In other words, London’s six airports processed 44 million more passengers last year than they did in 2010. To put this in perspective, this is an airport the size of Sydney in Australia being added to the London market in that time. Since the end of the last financial crisis, London’s commercial passenger traffic has increased at an average year-on-year rate of 4.3%. 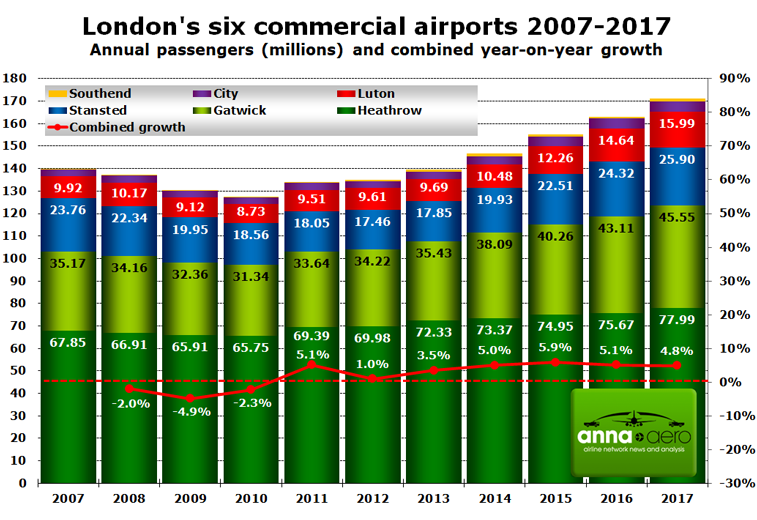 When comparing the traffic throughput of London’s airports between last year’s totals and those reported in 2010, the biggest net gain of passengers has been at Gatwick, with it handling 14.21 million more people last year than it did during 2010. Heathrow is second, seeing its annual traffic throughput climb by 12.24 million passengers, followed by Stansted in third (7.34 million more passengers in 2017 than in 2010), Luton in fourth (7.26 million), City in fifth (1.75 million) and Southend in sixth (1.09 million), although the latter handled only 3,583 passengers in 2010.

Dublin tops the destination board

With 357 weekly departures this summer, Dublin is by far the leading destination from London, with it served from all six airports in the UK capital. Last year 4.91 million passengers flew between London and Dublin, meaning that Ireland’s busiest airport accounted for 2.9% of all passengers from the UK city. Most departures to the capital of Ireland in S18 leave from Heathrow, with London’s biggest airport responsible for 36% of weekly departures. Interestingly, Heathrow also accounts for 36% of weekly departures to London’s second and third most popular destinations, namely Amsterdam and Edinburgh. Only one of the top 20 destinations from London is not flown to from Heathrow this summer, with that being 20th placed Alicante, with over 1.58 million people flying to the Spanish city from London in 2017. 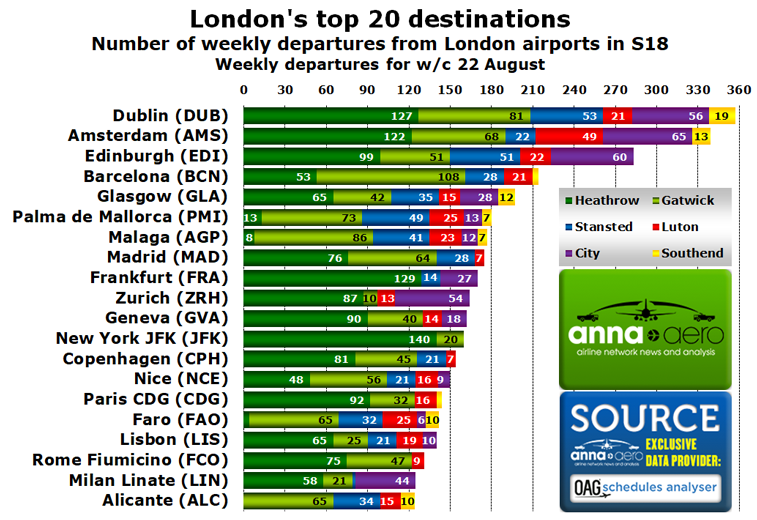 Of the 20 top destinations served from London in S18, Heathrow has the majority share of weekly departures to 14 of the airports listed, with the remaining six seeing Gatwick having the biggest stake. These include the Spanish destinations of Barcelona (Gatwick has a 50% share of weekly departures from London in S18), Palma de Mallorca (41%), Malaga (49%) and Alicante (52%), the Portuguese city of Faro (52%) and Nice in France (37%). Of the top 20 destinations, only five are flown to from all six UK capital airports, with those being Dublin, Amsterdam, Glasgow, Palma de Mallorca and Malaga. During the week analysed, London has scheduled flights to 398 destinations, with the leading 20 destinations accounting for 31% of the 11,800 weekly departures from all six airports this summer.

Wizz Air and Norwegian are flying

British Airways is not surprisingly London’s top airline, having major bases at Heathrow and Gatwick, along with operations from City and Stansted. Overall BA will grow its seat capacity by 1.6% this year. However, carrier’s further down the rankings are growing much faster. Wizz Air is the fourth largest airline serving London, with it increasing its seat offering from the UK capital by over 21% this year, while Norwegian will overtake Virgin Atlantic Airways in 2018 to become London’s fifth largest airline, a result of it increasing its capacity by over 19%. The fastest-growing airline in the top 20 however is Flybe, with it reporting a 29% increase in seats to London. What is interesting to note is that four of the top five airlines serving London do not fly from Heathrow, with only Gatwick able to claim that it is served by London’s top five carriers. Heathrow and City can only account for BA, Luton and Stansted have three airlines each, while Southend at the moment is only served by easyJet, however that will change when Ryanair opens a three-aircraft base at the airport in April next year. 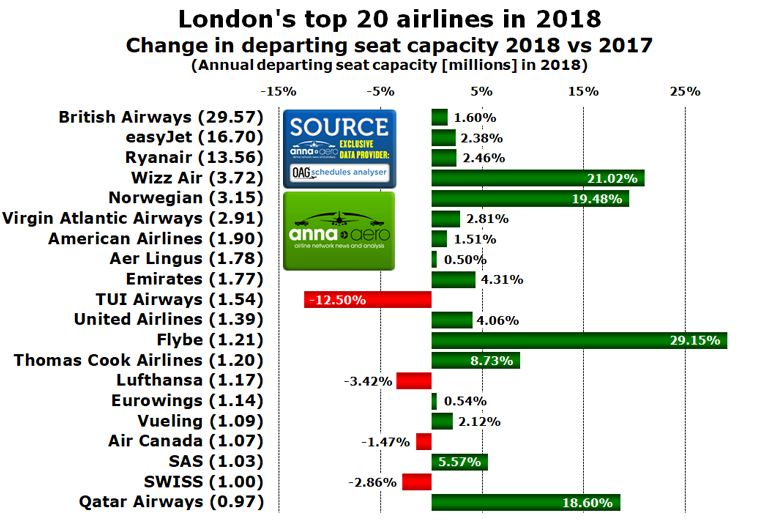 A new entrant to the top 20 is Qatar Airways, with it increasing its capacity to London this year by nearly 19%, helped by its introduction of services between Doha and Gatwick. One carrier that just missed out on top 20 is Jet2.com, with it offering 0.92 million one-way seats from its base at Stansted, having grown capacity from the airport this year by 80%. This result is impressive considering that the airline only starting flying from Stansted in 2017. Another encouraging factor for the carrier is that TUI Airways, one of its biggest rivals in the UK leisure market, is reporting a 12% cut in seats this year from London. When looking at the 121 airlines which will offer scheduled flights to London for all of 2017 and 2018, the biggest natural growth has come from Cobalt, with the Cypriot airline posting a 115% increase in seats to the UK capital this year, helped by its launch of flights between Larnaca and Heathrow in March.

Stansted is the airport of choice for new airlines

This year six new airlines have entered the London market. The biggest new entrant is Primera Air, with it having opened a base at Stansted and launched flights to New York Newark, Toronto Pearson, Boston and most recently Washington Dulles, a route which began on 22 August. While the carrier also launched an array of European routes from the UK airport, the carrier has decided to close these services over the coming months. Following Primera Air, the other new London market entrants include LEVEL which has introduced services from Vienna to Gatwick, Air Corsica has opened three new routes to Stansted, Hainan Airlines inaugurated flights to Heathrow, Widerøe now connects Kristiansand to Stansted, while Shenzhen Airlines will begin Heathrow flights in October. Of the new airlines operating to London in 2018, three chose to fly to Stansted, two to Heathrow and one to Gatwick. It should be noted that although Air Italy is a new brand to the London market, Meridiana had been serving Gatwick for some time before being rebranded. 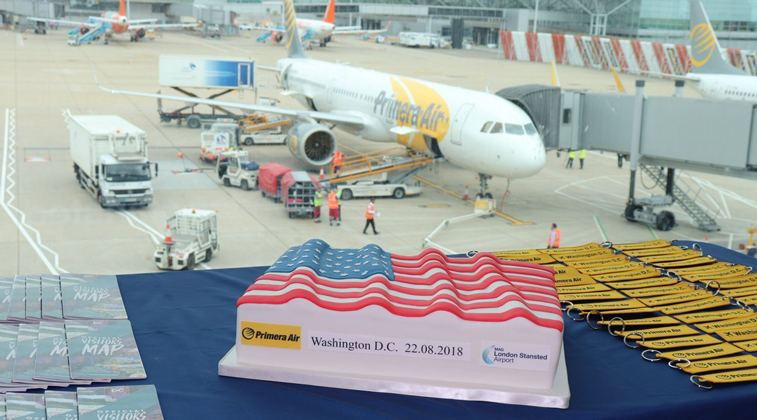 Primera Air is one of six new airlines flying to London in 2018, with it having opened a base at London Stansted to begin flights to Boston, New York Newark and Toronto Pearson, while a fourth transatlantic route to Washington Dulles began on 22 August. Of the six airlines joining London’s carrier list in 2018, three have chosen Stansted as their airport of choice, with Air Corsica and Widerøe following in the footsteps of Primera Air.