IndiGo goes from strength to strength at Delhi; LCC accounts for more than one quarter of airport’s capacity, 36 routes flown in S18 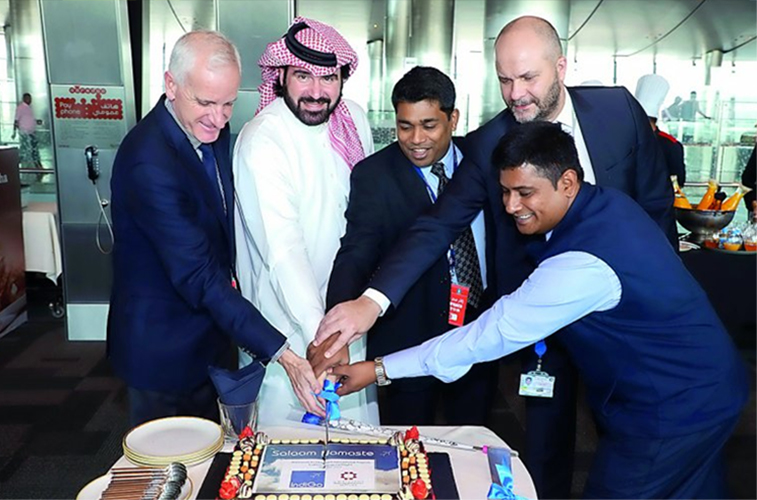 IndiGo is the largest airline in India and Delhi is its largest hub. The LCC offered 19.86 million two-way seats on services to and from Delhi in 2017, 5.5% up on the previous year. Doha is one of only three international links the airline will offer from Indian hub this summer.  It began flights to Qatar in May last year from Delhi and Mumbai.

IndiGo was the largest Indian-registered airline in 2017, based on published capacity. The LCC offered 60 million seats across its network last year, placing it significantly ahead of second placed Jet Airways, which provided 33.46 million seats. Data from Flightradar24 shows that IndiGo’s current fleet consists of 10 ATR 72-600s and 168 A320s, including 43 A320neos. The largest airport in its network is Delhi, which is also the busiest airport in India, handling 63.45 million passengers in 2017, according to anna.aero’s Rest of the World Airport Traffic Trends Database. We decided to take a closer look at the relationship between India’s premier LCC and its largest airport.

IndiGo offered 2.70 million two-way seats on flights to and from Delhi in 2008, by 2017 this had grown by 636% to 19.86 million. The LCC increased its available seats every year during this period, often by double-digit margins. In fact, there were only two years in which the year-on-year growth rate fell below 20%, with this occurring in 2013 and 2017. The largest single increase was 52.3% in 2011. The average annual growth rate for the period was an impressive 25.5%, although last year marked the carrier’s smallest percentage increase (5.5%) in capacity from Delhi over the period 2008 to 2017. Early indications are that the carrier’s growth rate for 2018 could be similar to that experienced in 2017, with it currently scheduled to operate 5.3% more seats from Delhi this year. 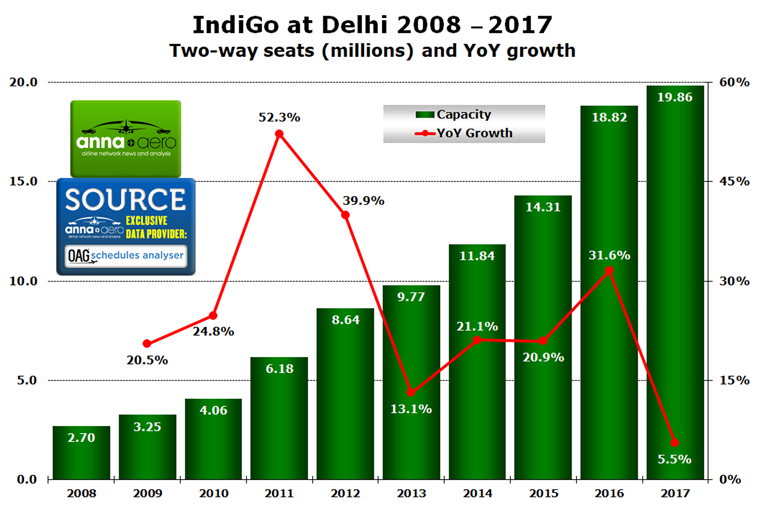 Domestic destinations dominate IndiGo’s scheduled seat offering at Delhi. From 2008 to 2017 the carrier only flew domestic links from India’s biggest hub, before introducing international connectivity in 2011. Its domestic capacity at the airport increased by 613% between 2008 and 2017, growing from 2.70 million seats to 19.24 million. International capacity grew from 146,000 seats in 2011 to 617,000 in 2017, representing a 322% percentage increase in the space of six years. The international share of IndiGo’s total capacity from Delhi peaked at 7% in 2012 and 2013, before dropping back down to represent 3% of seats in 2017.

In 2008, IndiGo’s operation only accounted for 7.4% of Delhi’s total capacity and it was the fifth largest airline at the airport, based on available seats. Fast forward to 2017 and IndiGo is the largest carrier at India’s biggest hub, accounting for more than one quarter of all seats at the airport. It overtook Air India to claim the crown as Delhi’s largest operator in 2015 and has maintained this position since then. To provide some perspective, the second largest carrier at Delhi in 2017 was Air India, which provided about 19% of all available seats. From 2008 to 2016, IndiGo grew its market share year-on-year, with the largest annual percentage point increase (5.9%) taking place between 2011 and 2012. IndiGo was by far the largest provider of domestic seats from Delhi last year, but was only the fourth biggest operator on international links, trailing Air India, Jet Airways and Emirates. 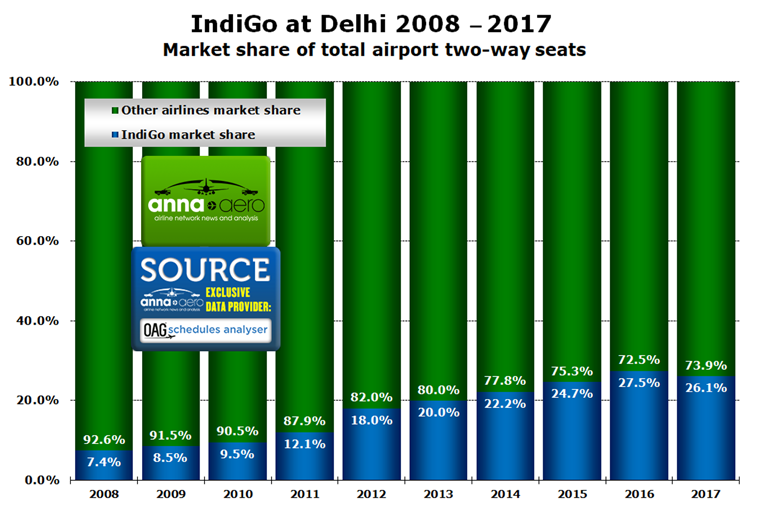 OAG data shows that IndiGo will offer at least one scheduled service to 39 different destinations from Delhi during 2018, although at least one of these appears to have been a one-off connection, possibly a scheduled charter, to Mangalore. Nevertheless, this means the LCC has trebled the number of destinations it serves from Delhi since 2008. Only three of the 39 links offered from India’s biggest hub this year are international, with these being the services to Doha, Dubai and Kathmandu. The number of international routes the carrier offered from Delhi peaked at four from 2011 to 2013. The largest year-on-year jump in destinations occurred in 2011, with the carrier offering seven more connections than in 2010. 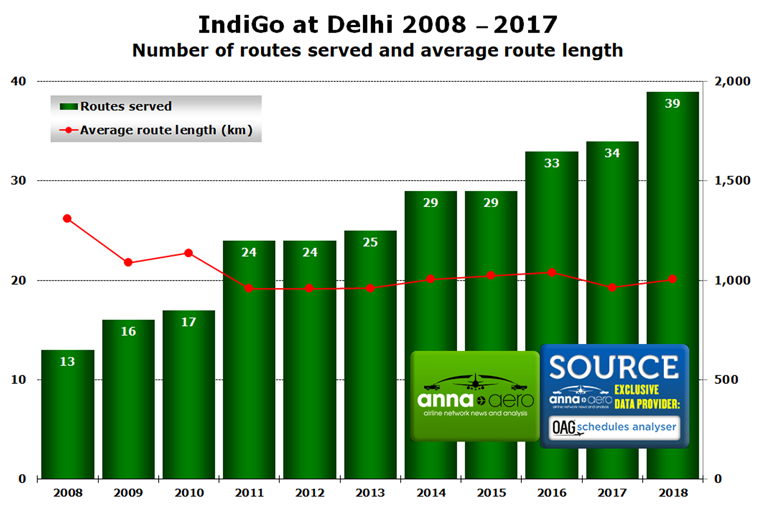 The longest sector in IndiGo’s Delhi network in 2018 is the 2,548-kilometre connection to Doha, while the shortest is the 208-kilometre hop to Dehradun. The average route length across the 39 destinations served is 1,005 kilometres. There has been little change in the carrier’s average route distance from Delhi over the past five years. During the period 2008 to 2017 its highest average route length was 1,309 kilometres, which it achieved back in 2008.

It is interesting to note that, despite IndiGo currently operating 10 ATR 72-600s – having received its first turboprop in late 2017 – Delhi remains an all-A320 operation for the LCC. Schedules indicate that the largest operating bases for the current ATR 72-600 fleet are Hyderabad and Chennai.

IndiGo will offer scheduled services to 36 direct destinations from Delhi during the week commencing 28 August, with 33 of these being internal operations within India. Indeed, domestic services account for all of the carrier’s top 15 routes from the airport in peak S18. Mumbai is its largest connection, accounting for 10% of the LCC’s weekly departing seats from Delhi this summer. IndiGo operates 16 daily departures on this highly-contested airport pair, which is also served by five other airlines. The carrier’s largest international link from Delhi is Dubai, which claims 17th spot on the route leader board, with 22 weekly flights offering nearly 4,000 one-way seats this summer. The LCC will only serve three international country markets from this particular base in S18, with the UAE accounting for nearly two thirds of its international capacity. The other country markets are Nepal and Qatar. 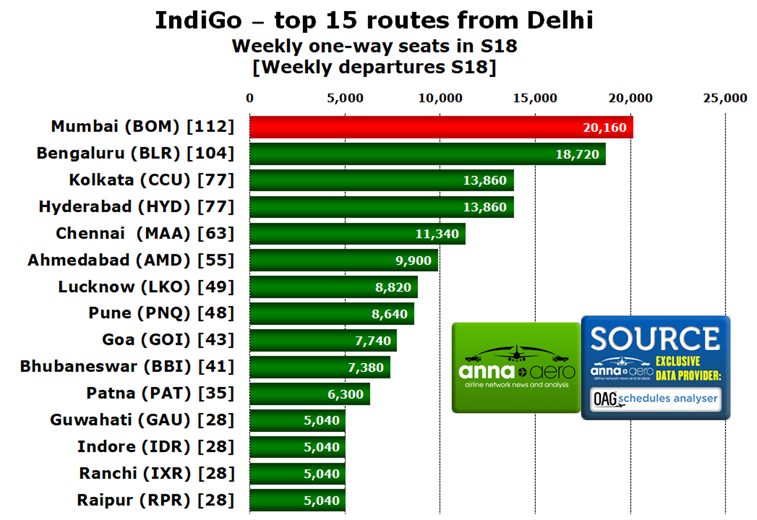 IndiGo’s Delhi route network has seen largely positive developments since last summer, with 18 routes seeing an increase in capacity, 13 remaining at the same levels as S17 and only three experiencing a reduction in flights. No routes were dropped and two were added, with Surat flights having launched on 16 August and services to Gorakhpur due to commence on 1 September. The only connection in the top 15 to see a reduction in capacity was the largest route to Mumbai (highlighted in red), with weekly seat numbers down 5.9% due to the removal of one daily rotation. The largest increase in capacity among the top-ranked routes occurred on the Bhubaneswar link, with 14 additional weekly flights scheduled, resulting in a 52% increase in seats compared to the same period in S17.

IndiGo’s network from Delhi has remained quite stable, with few routes being completely cut over the past 10 years. Indeed, the only two regular scheduled services to cease operating indefinitely during this period were the international links to Bangkok Suvarnabhumi and Singapore. It should be noted that this analyses focuses on direct, non-stop routes only. 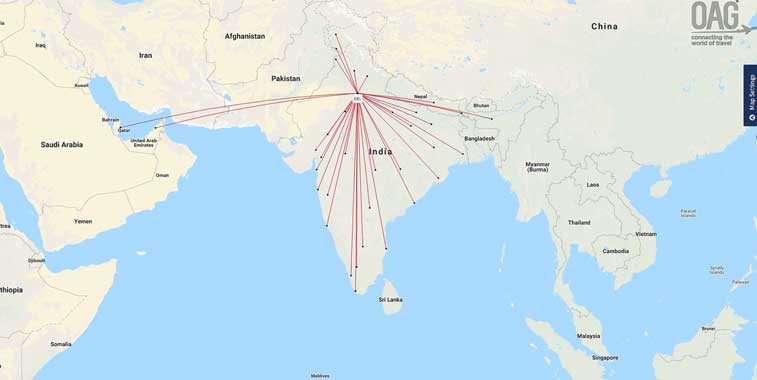 IndiGo will serve 36 scheduled destinations from Delhi during the week commencing 28 August, with 33 of these being domestic links. Its largest route is the connection to Mumbai on which it offers 16 daily rotations and more than 20,000 weekly one-way seats. Domestic capacity accounted for 97% of IndiGo’s seat offering from Delhi in 2017.