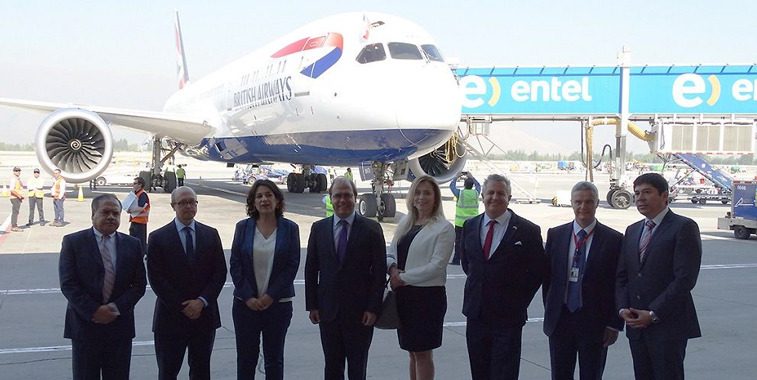 British Airways launched flights between London Heathrow and Santiago in January 2017, with the airline carrying 69,793 passengers on the route up until 31 December according to statistics from Junta de Aeronáutica Civil. Last year the number of passengers in Chile increased by 11%, with the international market seeing numbers climb by close to 16%. Overall LATAM Airlines is the largest carrier in Chile, accounting for 63% of all passengers last year.

Acting as South America’s spine, Chile is home to around 18 million people, while 6.45 million people visited the country in 2017. Visitor numbers climbed by over 13% last year, while various sources report that international visitors are expected to increase by 8.5% this year to pass seven million. This certainly shows that Chile is a nation on the move, with this being confirmed by the nation’s aviation statistics.

Last year Chile’s commercial airports handled 22.32 million passengers, up 11% versus the 20.09 million they handled in 2016. When splitting the market into domestic and international passengers, it shows that during the period between 2009 and 2013, it was the domestic market which was growing fastest, allowing it to advance its market share of all passengers from 52% to 57% within that five-year time frame. However, since 2014 the international market has been growing on average twice as fast as the domestic sector, consequently resulting in the latter’s market share falling back down from 57% to 52% last year, matching the result it reported in 2009. Overall the number of annual passengers flying from Chile grew by 130% between 2009 and 2017, going from 9.71 million to 22.32 million. 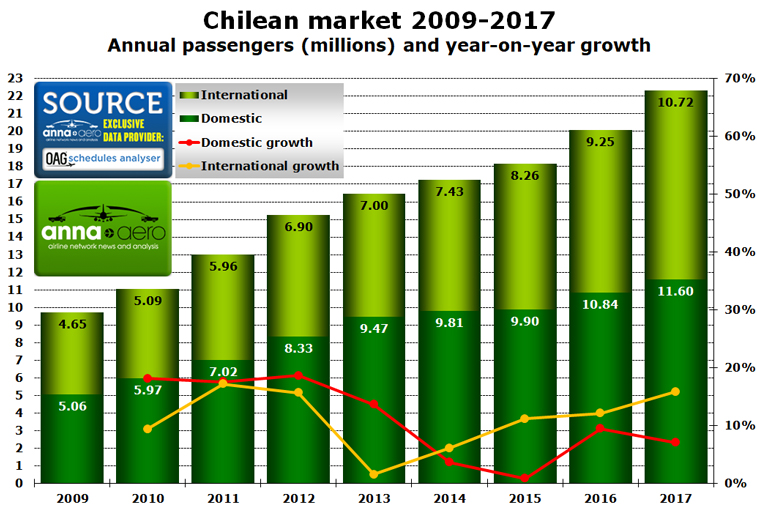 Of the 22.32 million passengers that were reported in Chile last year, 63% of them would have been transported by LATAM Airlines, with the oneworld member flying over 14.13 million passengers from Chile in 2017, up 3.5% versus 2016. Of the passengers which LATAM transported last year, just under 56% were flown on domestic services, with the number of people flying with the carrier on intra-Chilean routes falling by 1.3% in 2017. However, the airline posted a 10% increase in international passengers last year, carrying 6.26 million people on non-domestic routes, up from 5.67 million in 2016. Given that Argentina is Chile’s principal provider of international tourists, with over 3.32 million Argentinians setting foot in the country last year, accounting for 51% of all visitors, it is not surprising that Aerolineas Argentinas is Chile’s biggest international carrier (third largest airline overall), with it carrying over 534,000 passengers last year. 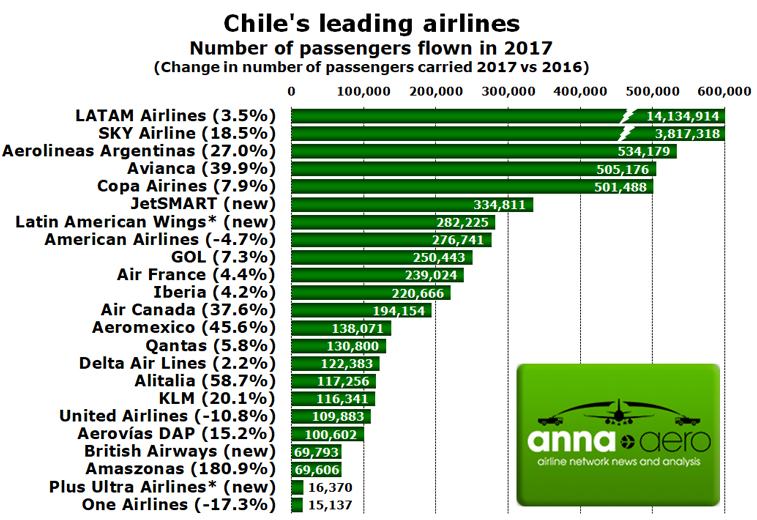 Last year witnessed four new airlines enter the Chilean market, with the leading new carrier being ULCC JetSMART. Launching commercial operations last summer, between its first flight on 25 July 2017 and 31 December, the airline flew 334,811 passengers, making it the sixth biggest airline in Chile. Along with JetSMART, three other carriers entered the Chilean market in 2017, namely Latin American Wings, a short-lived scheduled charter airline which suspended operations in March this year, British Airways and Plus Ultra Airlines, with the latter also not flying into Chile anymore. Looking at Chile’s market in 2018, another key development is the arrival of Emirates which began flights from Dubai via Sao Paulo Guarulhos back in July.

Given that it accounted for 52% of all passengers in 2017, it is no surprise to see the domestic sector is the largest country market from Chile, with seat capacity on intra-Chilean services forecast to grow by around 16% this year, rising from 14.60 million in 2017 to 16.89 million in 2018, with this increase being down to JetSMART offering a full-year of services for the first time this year. As stated earlier, with Argentina being the largest provider of international visitors to Chile, it’s not surprising that the country market is Chile’s second largest. However, OAG schedules show that the number of seats being flown between Chile and Argentina will remain stagnant in 2018. 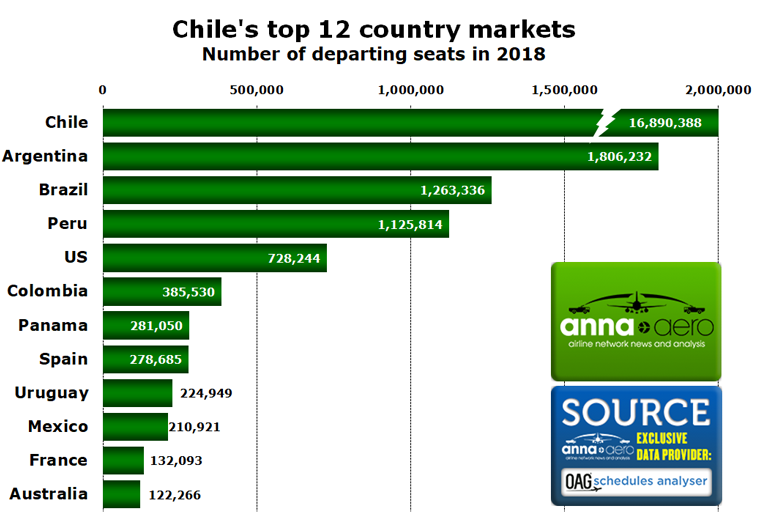 Two nations which are showing strong growth in 2018 are the third and fourth largest markets, Brazil and Peru. The former is forecasting a 21% rise in departing seats this year, while the latter is showing a 20% spike in capacity. One reason for the strong growth to Brazil is due to Emirates’ arrival in Santiago, as the airline flies via Sao Paulo, with the MEB3 member having traffic rights between the two South American cities when referencing its booking engine. Along with this service, GOL launched a seasonal operation between Salvador Bahia and Santiago in January. Another nation making big strides this year is Uruguay, a market which is reporting a 24% increase in seats. This growth is a result of LATAM Airlines’ new connection from Santiago to Punta del Este, a route which began on 4 January. 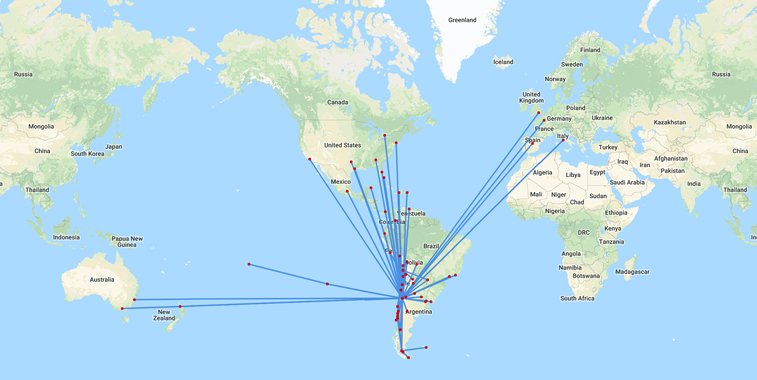 Chile’s 2018 route map shows that it has strong international links, with this market being responsible for 48% of the nation’s air travellers in 2017. One of the biggest developments last year for Chile was the launch on non-stop flights from the UK, with British Airways adding a 787-operated route from London Heathrow. While the route does not appear on this map as it operates via Sao Paulo, Emirates now offers a one-stop service to Dubai.