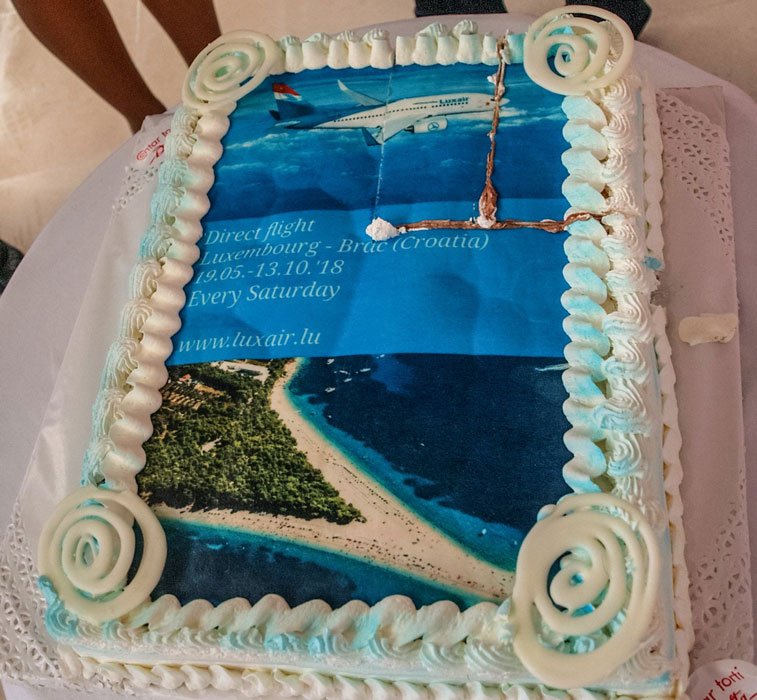 Luxembourg Airport welcomed 3.58 million passengers in 2017, a 19% increase on the previous year. Its largest carrier is Luxair, which commenced a weekly service between Luxembourg and Bol on the Croatian island of Brac on 19 May. Luxair accounts for 54% of its home hub’s departing weekly capacity in S18.

Luxembourg Airport is the only airport offering commercial passenger services in the Grand Duchy of Luxembourg, a small European nation bordering Belgium, France and Germany. Since it is the only commercial airport in its home market, all of Luxembourg’s scheduled connections serve international destinations. With a 4,000 metre runway, it is completely unrestricted in terms of the aircraft or routes that can be operated. According to the official government portal, the country of Luxembourg covers an area of just 2,586 square kilometres, and was home to around 602,000 inhabitants in January 2018. About 48% of the population at this time was made up of foreign nationals, which could partly explain the increase in demand for air services in recent years.

In 2008 Luxembourg Airport handled 1.70 million passengers. Traffic levels dropped by 8.5% to 1.55 million in 2009 as the global economic recession took hold, but since then the airport has enjoyed eight consecutive years of growth. Traffic rose by 131% from 2009 to 2017, reaching 3.58 million passengers last year. The average year-on-year growth rate between 2009 and 2017 was 11.1%, with the biggest single annual increase being 19% in 2017. Traffic growth has been so strong at the airport since the turn of the decade that it has doubled its passenger numbers since 2011. 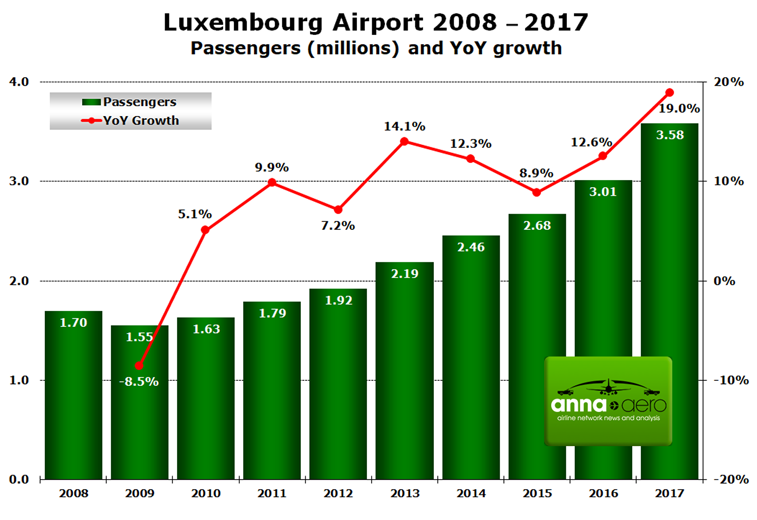 Average flight capacity on the up

A notable trend at Luxembourg in recent years has been a considerable increase in the average available capacity per departing flight. This grew from 60 seats in 2008 to 109 in 2018, based on the schedules filed so far, representing a 57% increase in average capacity over the period. The main reason for this is an increase in the proportion of total capacity operated by narrow-body aircraft at the expense of regional types. Although the seats flown by regional aircraft have also increased, narrow-body services have grown at a faster rate. In 2008, 68% of the departing seats from Luxembourg were flown on regional jets or turboprops, with the remaining 32% operated by narrow bodies. In 2018, these aircraft will provide 51% of all seats compared to 49% for regional aircraft. This shift can be partly explained by the introduction of Ryanair and easyJet services at the airport, but it is also partly due to home-based carrier Luxair increasing the proportion of seats operated by narrow-body aircraft from 30% to 40% from 2008 to 2018.

Wide-body, long-haul links are conspicuous by their absence at Luxembourg. No regularly scheduled wide-body services have operated from the airport over the past 10 years, indicating that, despite the long runway, airlines do not see enough demand for point-to-point long-haul connections. That said, the airport is home to Cargolux, the global dedicated air freight operator, which has a fleet of nine 747-400Fs and 14 747-8Fs. 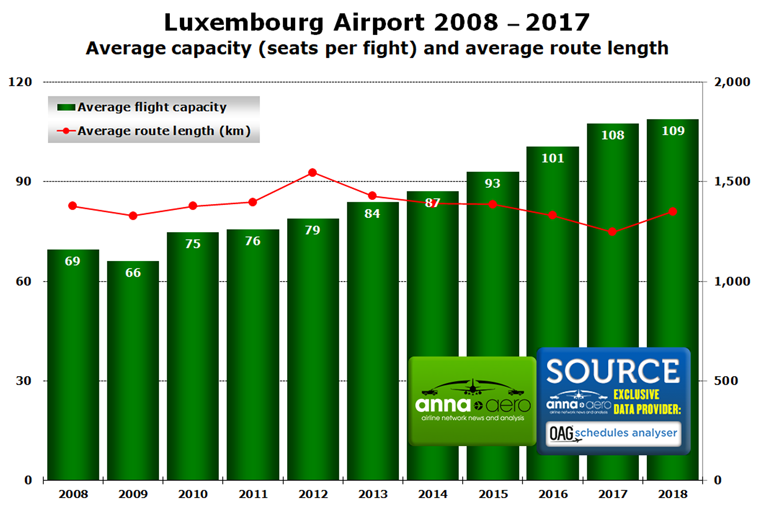 OAG data indicates that 16 carriers will offer scheduled services from Luxembourg during the week commencing 28 August. Nine of the airport’s top 12 airlines this summer are full-service flag carriers, while the remaining three are LCCs. Luxair is the national flag carrier of Luxembourg and is, unsurprisingly the largest operator from its home hub, accounting for 54% of all departing weekly seats in peak S18. However, it has seen a decline in market share over the past 10 years, with the proportion of total seats provided by Luxair dropping from 68% in 2008 to 53% last year. In S18, Luxembourg’s national carrier will offers scheduled services to 57 different destinations across 305 weekly departures. The eight foreign full-service carriers in the top 12 will all link Luxembourg to their home markets, but the LCCs, Ryanair, easyJet and Volotea, each offer connections to destinations outside of their home markets under seventh freedom rights. 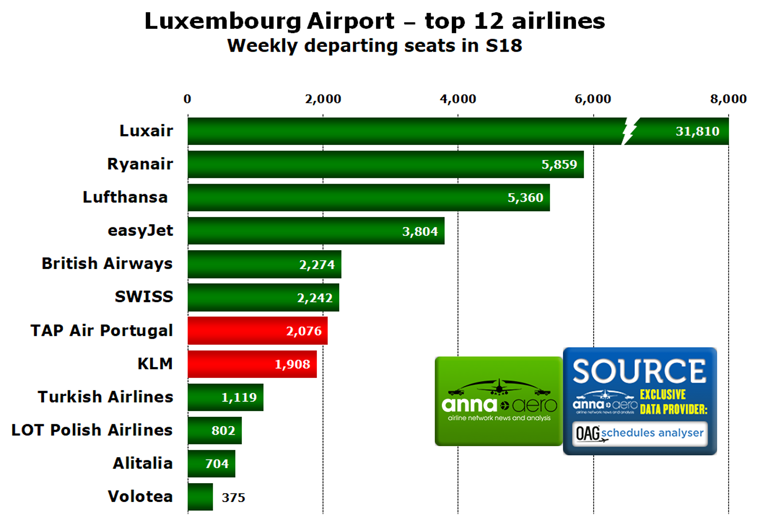 The majority of Luxembourg’s leading airlines increased their weekly capacity at the airport for this summer compared to the equivalent period last year. The strongest percentage growth came from easyJet, which added 53% more seats after increasing frequencies on services to Lisbon, while also introducing new routes to Bordeaux and Berlin Schönefeld since S17. Two of the top-ranked carriers witnessed a decline in seat numbers this summer (highlighted in red). The largest of these cuts came from KLM which reduced its weekly capacity to Amsterdam by 3.2%, with the Dutch carrier cutting one rotation from its weekly schedule this summer.

There are scheduled flights available to 72 destinations from Luxembourg during the week commencing 28 August. Two of the top three routes in S18 are to Portuguese destinations, which is unsurprising given the large number of Portuguese nationals living in Luxembourg, which account for 16% of the country’s total population. Porto is the largest route based on available seats, and accounts for 6.1 % of Luxembourg’s weekly departing capacity. Four carriers will offer 22 combined flights per week on this route during peak S18. In addition to the two Portuguese links, the top 12 routes also include two destinations in Germany, two in the UK, two in Spain and one each in Switzerland, Italy, the Netherlands and France. London is the only city represented by more than one destination airport in the top 12, with London City and Heathrow claiming fifth and sixth positions in the route table. In total, there are flights available to four London airports from Luxembourg with links also operated to Gatwick and Stansted. All of the top-ranked routes link Luxembourg with other destinations in Europe. The highest-ranked non-European link is Djerba, in Tunisia which claims 19th place.

There are direct scheduled services on offer to 21 countries from Luxembourg in S18. The largest country markets are Germany, Portugal and Spain. The only two outside of Europe are Tunisia and Morocco which are the 12th and 21st largest international markets respectively. 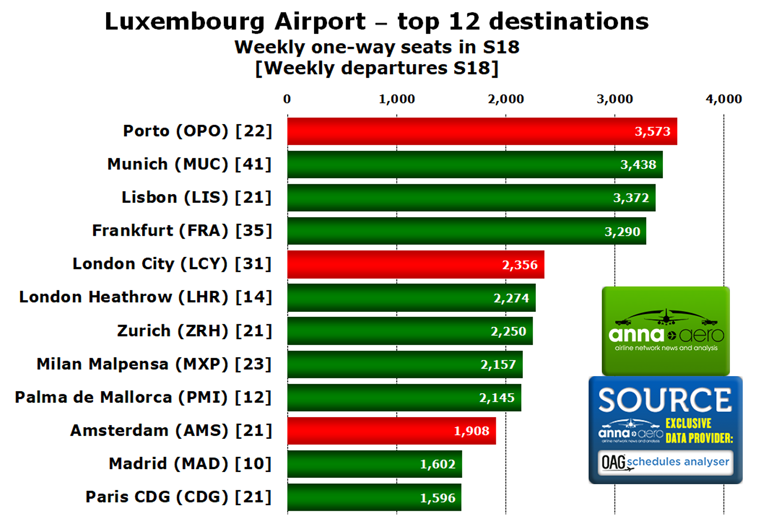 Most of the top-ranked routes have seen an increase in capacity this summer compared to the equivalent period last year. The strongest growth among the top 12 came on the Frankfurt link, with capacity up by 28% as a result of Lufthansa increasing its daliy frequencies from four to five. This sector is operated by its regional Lufthansa CityLine subsidiary, with CRJ900s. Three of the top 12 routes (highlighted in red) witnessed a decline in capacity compared to S17. The largest cut came on the biggest routes to Porto, with around 13% fewer seats available due to a reduction in frequency by Luxair.

Five new scheduled destinations have been introduced at Luxembourg since S17. These are Bordeaux, Milan Linate, Enfidha, Berlin Schönefeld and Bol on the Croatian island of Brac. anna.aero’s New Routes Database shows that another new link is set to launch on 31 October, when Luxair commences flights to Ras Al Khaimah in the UAE. 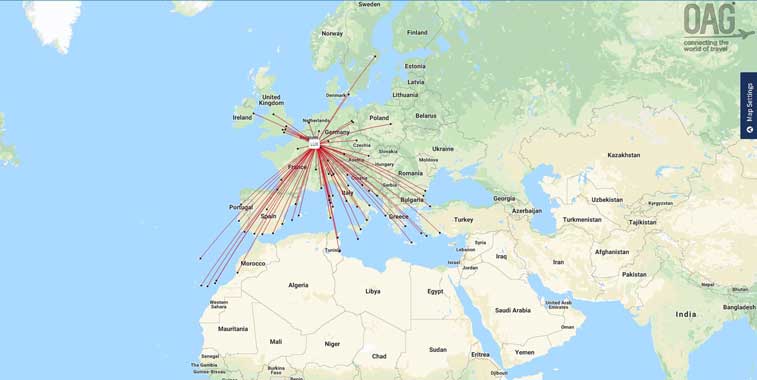 Luxembourg Airport will see scheduled services available to 72 different destinations across 21 countries during the week commencing 28 August. The largest destination markets are Germany, Portugal and Spain. The only two countries currently served outside of Europe are Tunisia and Morocco in North Africa.