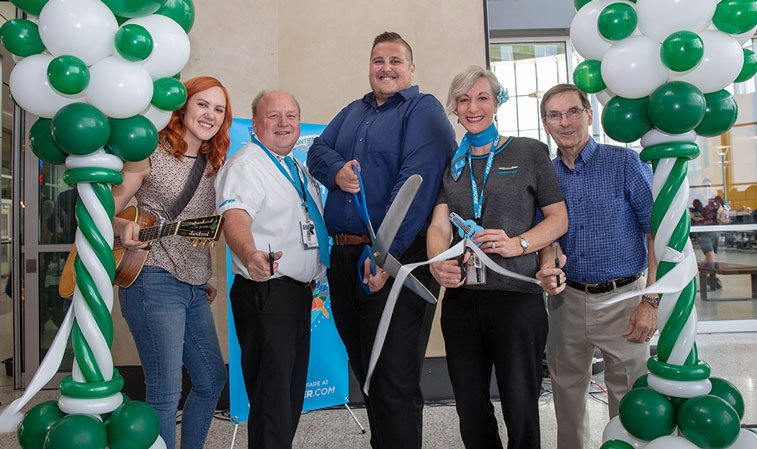 Domestic services have traditionally dominated the US market and accounted for 77% of all passengers in 2017. Frontier Airlines celebrated its inaugural flight between Austin and Orange County on 14 August, with ribbon- and cake-cutting ceremonies being held at the Texan airport. Seen snipping the ribbon to officially open the 1,941-kilometre sector, along with the crew, are: Grace Pettis, a local Austin musician; Richard Oliver, Spokesperson and Communications Supervisor, Frontier Airlines; and Mike Rodriguez, Chairman, Airport Advisory Commission.

There were 965 million passenger enplanements on flights serving US airports in 2017, according to the Bureau of Transportation Statistics. This was 3.4% up on 2016 and 19% more than the 812.7 million passengers handled in 2008. The domestic market has traditionally dominated departures boards at US airports and in 2017, internal flights accounted for 77% of all traffic.

US domestic market up 14% over past 10 years

There were 651.7 million passenger enplanements on domestic services in the US in 2008. This had risen to 741.6 million by 2017, representing a 14% increase in traffic. The only year-on-year decline in domestic passenger numbers over the past 10 years took place at the height of the global recession in 2009, when internal traffic dipped by 5.2%. Since then, the US domestic market has enjoyed eight back-to-back years of growth.Traffic subsequently increased by 20% from 2009 to 2017. During this period the average year-on-year growth rate was 2.3%, and the largest single annual increase was 5.0% in 2015. 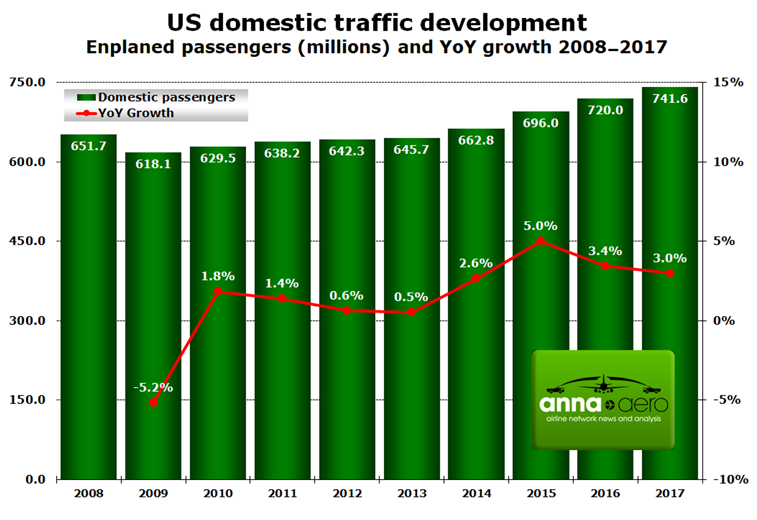 An analysis of the most established domestic routes in the US market – classified here as those with a minimum of 100,000 one-way seats in 2016 – reveals that the fastest growing of these links in 2017 was the Floridian connection between Fort Lauderdale and Orlando, which enjoyed an 83% boost in capacity last year. This was due to the return of Southwest Airlines on the inter-state route, with the LCC having previously operated the sector until 2013.

International traffic grows by more than one-third since 2008

There were 161.0 million passengers on international flights to and from the US in 2008. This grew to 223.4 million passengers in 2017, representing a 39% increase in overseas traffic. As with the domestic market, the only year-on-year decline took place in 2009 as the global economic downturn took hold. There then followed eight year-on-year increases international traffic. The average annual growth rate over this period was 3.5% and the largest single boost in passengers was the 6.0% increase witnessed in 2015. International traffic has enjoyed stronger percentage growth than domestic services in the US market over the past 10 years. The proportion of all US passengers taking an international flight has subsequently increased from 20% in 2008 to 23% last year. 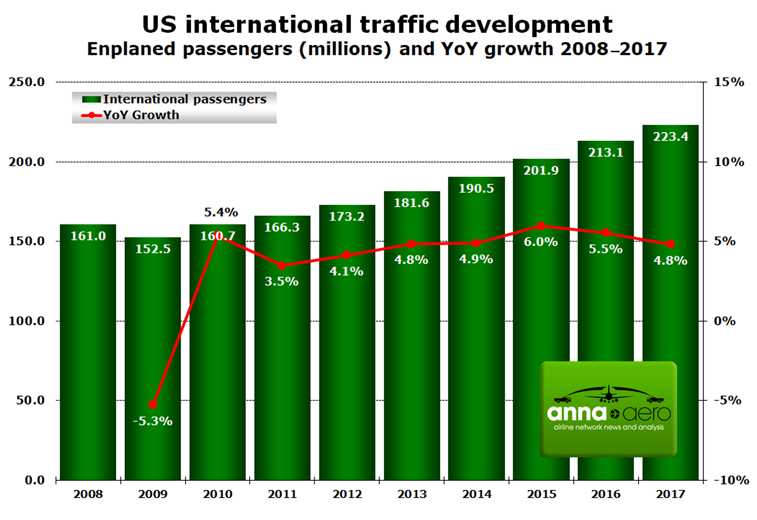 An examination of the most established international routes in the US market (those with a minimum of 100,000 one-way seats in 2016) shows that the fastest growing sector in 2017, was Dublin to New York Newark. This transatlantic link enjoyed an 86% increase in one-way seats last year as Aer Lingus ramped-up its year-round operation on the route, having only commenced operations on the sector in September 2016.

OAG data suggests that up to 701 US airports welcomed at least one scheduled service in 2017. Clearly some of these were small facilities with irregular or one-off flights, but 245 offered 100,000 departing seats or more. An analysis of the more established airports (those with a minimum of 100,000 departing seats in 2016) reveals that 174 of these saw an increase in scheduled seats last year. The strongest growth among these airports came at Stewart, where capacity was up 65% due in the main to the introduction of five new low-cost transatlantic links from Norwegian. The largest airport to make the top 12 growth list was Long Beach in California, which provided more than 2.4 million departing scheduled seats last year. 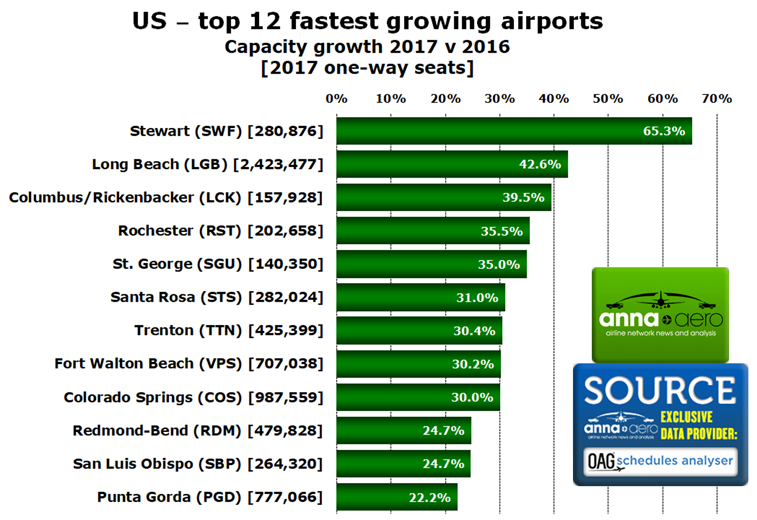 Outside of the more established airports, a further 464 saw at least one scheduled flight in 2016 but fewer than 100,000 departing seats. Two of these facilities which experienced notable growth last year were Concord (65% more seats) and Belleville (58% more), with both airports enjoying an increase in capacity from Allegiant Air. This resulted in each facility offering more than 140,000 departing seats in 2017.

There were scheduled flights to 108 different countries from the US in 2017, although some of these international markets were only served with limited or irregular services. The largest country market from the US last year was Mexico, which displaced Canada as the leading international destination. Despite a 17% increase in the seats available to its North American neighbour from 2008 to 2017, Canada’s share of international capacity from the US dropped from 14% to 13% over this period, with Mexican services seeing stronger growth.

A review of the more established international markets reveals that 79 were served with a minimum of 100,000 one-way seats in 2016, with 58 of these enjoying an increase in capacity last year. The strongest growth came on services to Cuba, with seat numbers to the Caribbean island up 380% due to the Obama administration’s decision to allow US airlines to operate scheduled flights between the two countries for the first time in many years, as part of a widely reported restoration of diplomatic relations. Seven of the top 12 fastest growing international markets last year were in Europe, with two in the Asia Pacific region, two in the Americas and one in Africa. 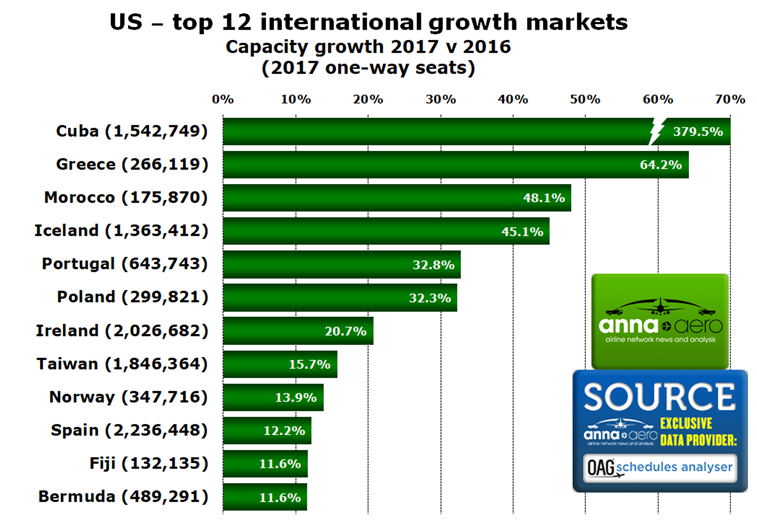 There were a further 26 international markets served by fewer than 100,000 one-way seats in 2016, with 14 of these welcoming an increase in capacity in 2017. The largest increase among these countries came on services to Singapore, with seat numbers to the Asia Pacific city state increasing by 180%, to more than 200,000 last year. This was due to Singapore Airlines and United Airlines offering more seats on services from San Francisco, plus the latter’s introduction of a connection from Los Angeles. 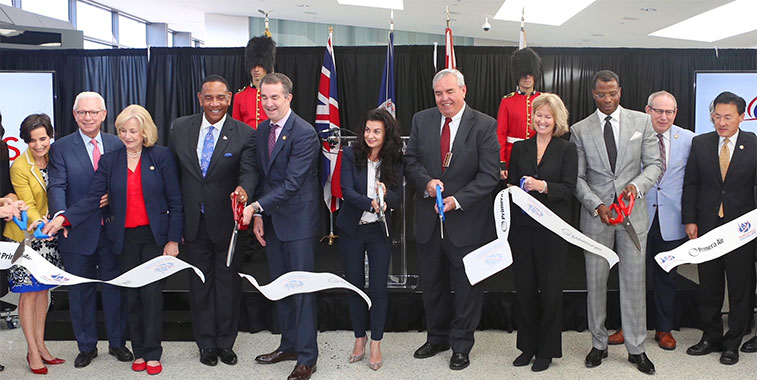 There were 965 million passenger enplanements on flights serving US airports in 2017, according to the Bureau of Transportation Statistics. About 23% of these were taking international flights. A recent addition to the international arrivals board is Primera Air’s service from London Stansted to Washington Dulles, which launched on 22 August.