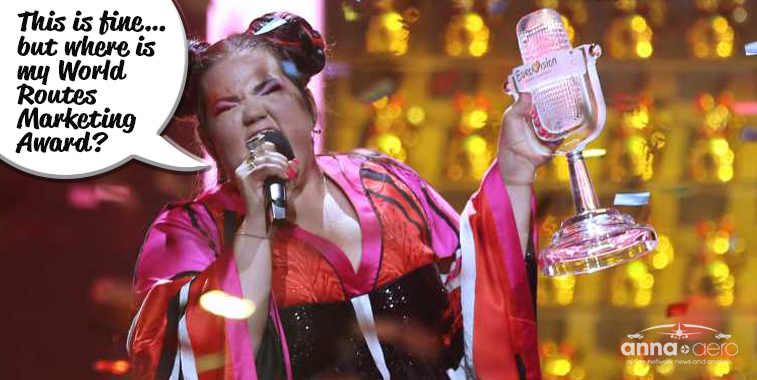 While Netta Barzilai may have taken home the Eurovision title for Israel back in May, we’re sure she would have much rather collected the World Routes Marketing Award. While she is unable to claim victory in Guangzhou next month, five airports in the running for the ’20-50 million’ prize certainly are, with the all-European nominees of Athens, Brussels, Copenhagen, Dublin and Oslo Gardermoen battling it out to take the sought-after award.

In a series of features leading up to this year’s World Routes Marketing Awards, taking place at the event in Guangzhou on Monday 17 September, anna.aero is speaking to the potential winners of this year’s awards to discuss what it means to be nominated for the title, and the recognition that comes with it. Having looked at the five airports nominated in the ‘under 4 million‘ category, plus those in the ‘4-20 million‘ last week, this time we hear from the five European airports which are in contention in the ’20-50 million’ race. Read what Athens, Brussels, Copenhagen, Dublin and Oslo Gardermoen airports have to say about their nominations.

Its all Greek to them – Athens Airport 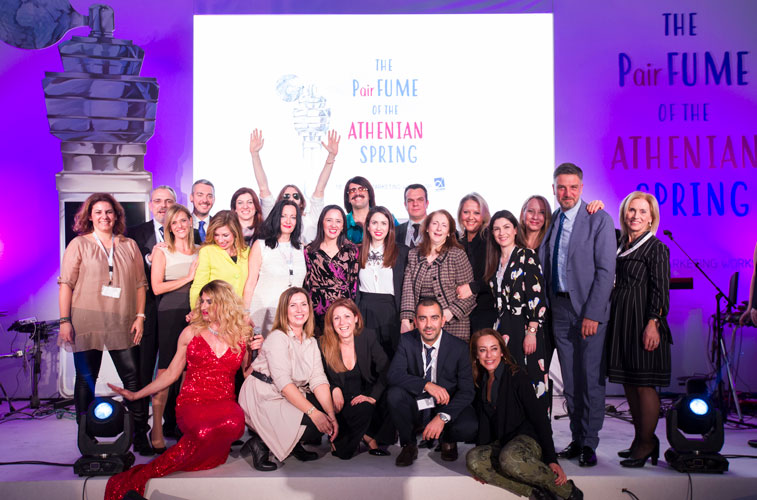 Athens Airport’s Communication and Marketing Department with performing artists during the annual Airline Awards’ Ceremony for 2018. 15 awards were presented to airlines having achieved the highest performance in the Athens market.

“We feel truly honoured to have been nominated again this year from our airline partners for the World Routes Marketing Awards, considering that this “vote of trust” is a token of appreciation for our innovative marketing approach and continuous and substantial support of our airline partners operations’ to/from Athens,” comments Ioanna Papadopoulou, Communications and Marketing Director, Athens Airport. “Up to now, the Greek gateway has enjoyed 59 consecutive months of passenger traffic growth (October 2013 to August 18), with 2017 being the third record-breaking year in a row and 2018, so far, setting the track for the fourth consecutive record-breaking year,” adds Papadopoulou. During the first eight months of the year, passenger traffic at the airport has increased by 11.5%, delivering 1.6 million additional passengers, and Athens’ connectivity has been enhanced by 19% vs 2017, with there being a network of 163 destinations operated by 60 airlines in 2018, while only 137 destinations were served in 2017. “Recently, Athens has welcomed five new airlines, namely Wizz Air which launched nine new international routes, Cyprus Airways, Primera Air, flynas and Wataniya Airways, and new scheduled services to 58 destinations, including 24 previously unserved routes. Among others, major highlights include the establishment of Athens as Volotea’s newest base, the addition of 14 new routes by Ryanair and 12 by Aegean Airlines, as well as substantial capacity increases by the MEB3s; Emirates’ A380, Qatar Airways’ A350-900 and Etihad Airways’ 787, all operated on a daily basis,” informs Papadopoulou. “It seems that W18/19 will also develop strong, with 30 new routes already announced, including new destinations to Aqaba and Marrakech, while our newest long-haul service to Chicago O’Hare with American Airlines and Royal Air Maroc’s Casablanca were announced last week, signalling a very promising S19 as well. Looking forward to welcoming you all to our ‘Do the MATH‘ booth during Routes World 2018!” 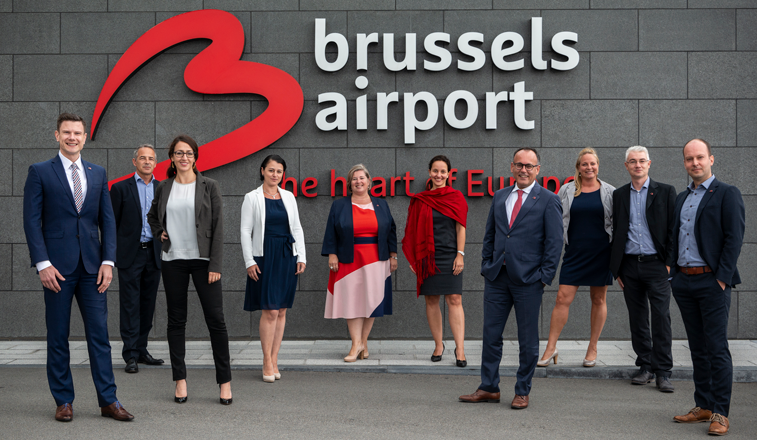 Commenting on Brussels’ nomination at this year’s World Routes Marketing Awards, Léon Verhallen, Head of Aviation Development, said to anna.aero: “Brussels Airport was extremely happy to be the winner of the over 20 million passenger category as well as the overall winner at Routes Europe in Bilbao last April. After our previous overall Routes Europe wins in 2012 and 2015, it confirms that our consistent ‘have seats, will travel’ approach continues to be highly appreciated by our airlines. For World Routes, we have been slightly less visible since our overall win in 2014, so we are very pleased that we can compete once again on the highest level. The year 2018 will be another record year for Brussels Airport. We have broken the barrier of 25 million passengers for the first time, welcomed Cathay Pacific and Georgian Airways as new airlines and have added some 15 new destinations to our network, including Shanghai, Hong Kong and Shenzhen, in the past 12 months. Not only that, but 2019 also looks promising, especially with the recent news that Primera Air will base two 737 MAX 9 aircraft at Brussels from May, launching flights to Newark, Boston and Washington.” Along with the airport’s significant airline developments, the hub has also welcomed a new staff member to strengthen the team. “Sonja Gehlen will take care of the majority of the European airlines as we all know that the full attention of our current client base remains key for our traffic development.” Once again the airport will have the finest selection of Belgian beverages for delegates to taste in China. “Visit us at our great Brussels Airport booth in Guangzhou, where we will be serving again the best Belgian beers after a busy working day.”

To help support its nomination for this year’s marketing award, Brussels has prepared a short video of its ‘have seats, will travel’ winning formula. If you want to see why the Belgian hub has been so successful in its aviation marketing, click here to find out more. 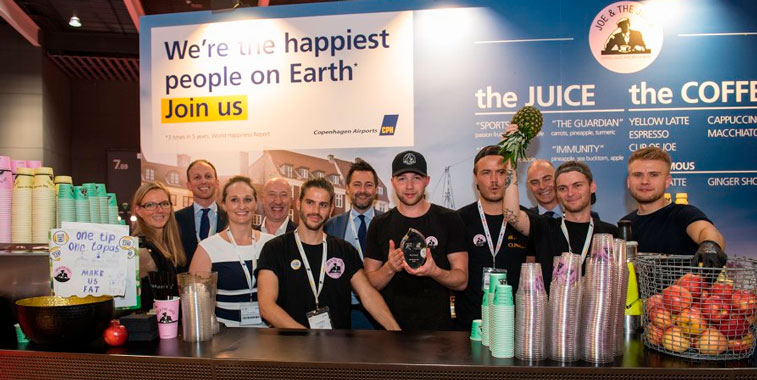 “Everything we do, is to help airlines to grow their business with us. To be nominated by them, as being worthy of recognition of having done a great job among all their airport partners, is an accolade we take very highly, and with great pride and respect,” comments Morten Mortensen, Director of Airline Sales & Route Development, Copenhagen Airport. The Danish hub has certainly presented strong results for the last few years. “In only one year, the number of direct routes between China and Copenhagen has gone from two to five. These new routes are all opened by new Chinese carriers – Air China, Cathay Pacific Airways and Sichuan Airlines, ” adds Mortensen. “The long-haul, intercontinental routes were the main factor in our growth in the first half of 2018, with passenger numbers up 9.2% primarily due to the new long-haul services. When looking east, we can boast an increase in ASKs of 22.3% on last year and 29 additional weekly Asian frequencies. Among those, we are especially proud to highlight Air India to Delhi and Royal Jordanian to Amman. We are also delighted that our largest customer SAS has decided to focus their long-haul business on Copenhagen and switch their Hong Kong route to the airport. We now have more than 40 direct routes to destinations outside Europe – and this with a modest catchment area of four million people within a two-hour drive. Within the last year alone the route development team at Copenhagen Airport attracted a total of 19 new routes to 13 new destinations.” 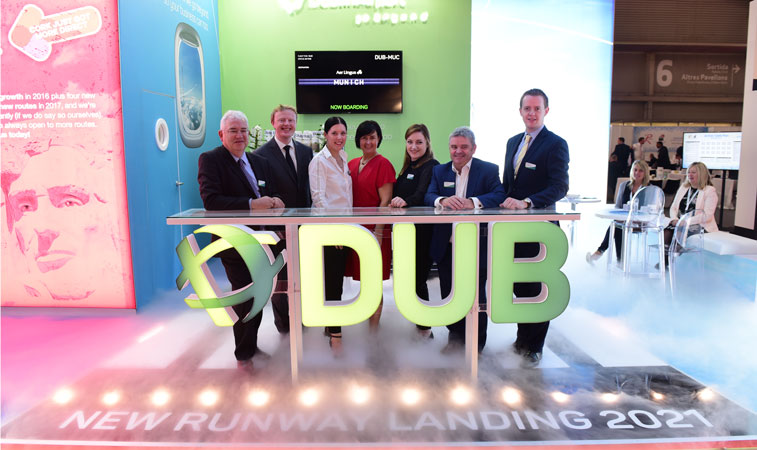 Speaking to anna.aero, Vincent Harrison, MD, Dublin Airport, emphasised his pride at the airport’s nomination, the fifth consecutive year Dublin has made the shortlist: “To be recognised among our peers is gratifying, particularly when nominations come from our airline partners. In Dublin, we place specific emphasis on building strong relationships and working as a partner. Our team work closely with our airline customers to deliver marketing supports and initiatives that make a difference, leveraging our leadership position in Ireland. The past year has provided some historic milestones including Ireland’s first direct flights to China with Hainan Airlines and to Hong Kong with Cathay Pacific. Altogether we welcomed six new carriers in 2018 with a total of 54 routes increasing in frequency in 2018. Double-digit growth in transatlantic services driven by growth of established carriers such as Aer Lingus, as well as the introduction of a new transatlantic carrier, Norwegian. We look forward as always to attending the World Routes event in Guangzhou and to sharing the experience with current and prospective airline customers.” 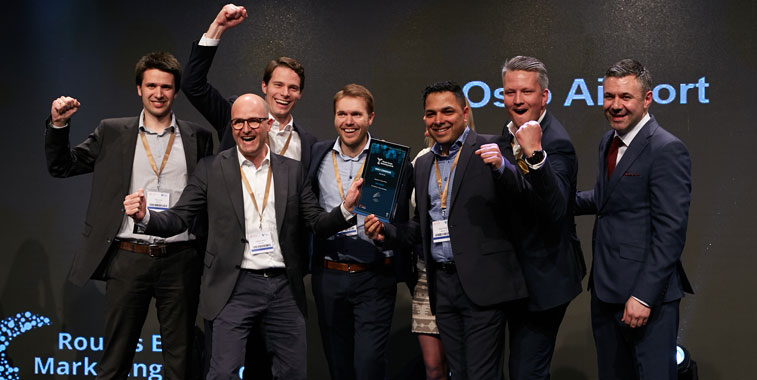 “What a sensation to get the message from Routes that the Avinor team is nominated for the fourth time in a row for the World Routes Marketing Awards! And can you remember the pictures from Bilbao once we were highly commended? All joy and proudness,” comments Jasper Spruit, VP Traffic Development, Avinor. “For Avinor the numbers for 2017 are indeed beautiful. Growth across the group’s entire Norwegian airport network was 4%, and Oslo Airport delivered 27.5 million passengers, a net increase of 1.7 million passengers, of which 1.3 million were international. Cargo volume grew by 35% at Oslo and it is Northern Europe’s largest full-freighter hub. We have welcomed 14 new airlines which have opened routes to Oslo in recent months, including Ethiopian Airlines, easyJet, LOT Polish Airlines and Iberia Express. It’s all about #teamwork and #Avinor,” adds Spruit. “For the coming years I believe it is all about transforming ourselves further. One of the things we look at is more innovative ways to gather data, with even higher reliability on market developments and with potential to lower risk for future network development decisions. To further develop our marketing efforts, we’re introducing the Explorer’s Society. It’s a forum where our airline partners are invited to join our Avinor’s KAMs in exploring remarkable achievements and people connected to our six markets. And not to forget – you might have heard about the statement from Avinor to electrify all domestic aviation in Norway by 2040. All in all it is a huge team effort and I am very proud of the team and the group nomination, though I hope we win both,” highlights Spruit, who is also nominated for the individual award at this year’s ceremony.

The winners of the World Routes Marketing Awards 2018 will be announced at the conference in Guangzhou on 17 September, with either Athens, Brussels, Copenhagen, Dublin or Oslo Gardermoen to be among the winners. Along with the ’20-50 million’ category, a further five awards will also be presented on the night, with the nominees in these categories sharing their views with anna.aero over the coming weeks leading up to the event next month.