World Routes host Guangzhou-Manchester is “Skyscanner Unserved Route of the Week” with over 120,000 searches 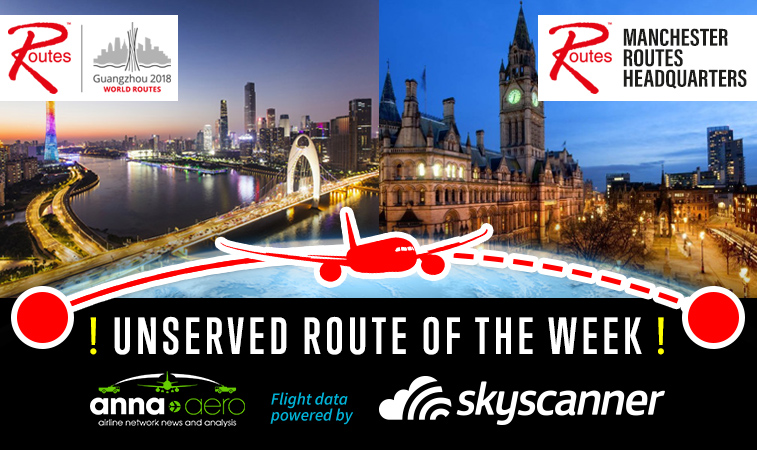 If only this potential sector had existed over the last couple of years, as the Routes events team would have had a far smoother journey to this year’s World Routes host city of Guangzhou from its Manchester home. No doubt the Routes future hosts team represented some of the potential travellers on this city pair, which totalled over 120,000 searches in the last 12 months. Perhaps China Southern Airlines will announce it will serve this route during the four-day network development event next month? Adding to its existing non-stop links to Amsterdam, Frankfurt, London, Moscow, Paris and Rome.

With over 120,000 searches in the past year, a potential city pair from World Routes host airport Guangzhou to Manchester has been identified as this week’s “Skyscanner-anna.aero Unserved Route of the Week” – a powerful analysis based on aspirational data captured from the Skyscanner.net flight comparison site used by +70 million unique visitors per month. “China remains a key focus area for us at the airport. When you look at the size of populations in cities across China combined with the growing business demands from our catchment area, we feel there are further opportunities for additional routes in China,” says Robert Smith, Head of Aviation Development at Manchester Airport. “We are continually talking to carriers about the opportunities that exist out of Manchester for connecting China to the North of England.” 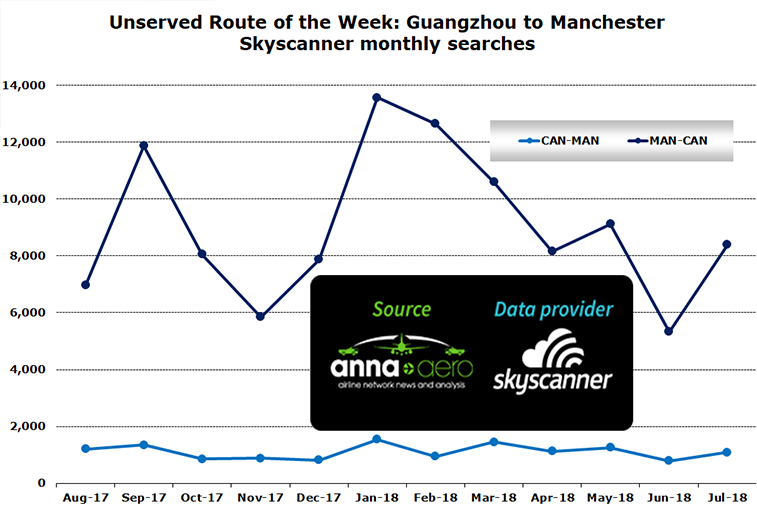 Skyscanner demand on this week’s unserved route shows a significant preference towards the UK end of the city pair, with an 89/11 split, so on this basis we looked at potential carriers at the Manchester origin first. According to OAG schedules for the week commencing 23 August, the largest carrier at Manchester is Ryanair (17% share of weekly seats). Along with the airport’s second largest capacity provider, Jet2.com (13% share), both carriers are unlikely to consider a service to China at this point in their respective network development.

Thomas Cook Airlines is Manchester’s third largest airline (11% share) and among its 54-destination route portfolio at the airport feature 13 long-haul routes in this week’s schedules. However its network selections seem to be concentrated on flights going west rather than east, with services to Orlando (nine times weekly), New York JFK (seven), Cancún (six), Las Vegas (five), Punta Cana, San Francisco, Los Angeles, Boston (all three times weekly), Holguin, Seattle-Tacoma (both twice-weekly), Santa Clara, Varadero and Cayo Coco (all weekly). While the pan-European leisure carrier is clearly not just flying to holiday hotspots from its biggest UK base, particularly illustrated by its service to its various US cities, perhaps a route to the biggest city in Guangdong Province is a little off the airline’s current new route radar. Its a similar story with Virgin Atlantic Airways, as its seven-destination, long-haul network from Manchester (seventh-largest carrier; 3.3% capacity share) are all in the US and Caribbean.

Contemplating the Chinese end of the route, Guangzhou’s leading capacity provider of its current 71 serving airlines is China Southern Airlines, which offers 48% of the airport’s weekly seats. China’s biggest carrier (in terms of weekly one-way seats) presently flies to 126 destinations from the city just 120km north-west of Hong Kong, and already has a notable direct and one-stop European offering – serving London Heathrow (nine times weekly), Amsterdam and Paris CDG (both daily), Rome Fiumicino (six), Moscow Sheremetyevo (four) and Frankfurt (three – flown one-stop via Changsha). So while the airline is no stranger to the European market, it is yet to add a service to a second city in any nation it flies to in the region. However, now armed with this captivating Skyscanner data, the UK could become the first European country that China Southern commences a route to a second destination from Guangzhou.

When looking at the previous year of search data (graph above), the busiest month (from Manchester) is January 2018, with over 13,500 searches. On this basis the anticipated booking profile of the route has been allocated as long-haul business, resulting in over 60% of travellers on this potential sector wanting to book between seven to three months before departure. This would seem to indicate that the busiest months for traffic will be between April and August. Using the same methodology for the Guangzhou end of the sector, the peak months for traffic will be between the same months.

According to OAG Traffic Analyser, because there is no direct service, the top three connecting options chosen by those passengers who did book travel between Guangzhou and Manchester in the last 12 months (year ending June 2018) indicates that the majority of connecting travellers used Beijing (24%), Hong Kong (17%) and Dubai (12%). Passengers seeking to fly between the two cities used 23 different connecting airports to complete their respective journeys. 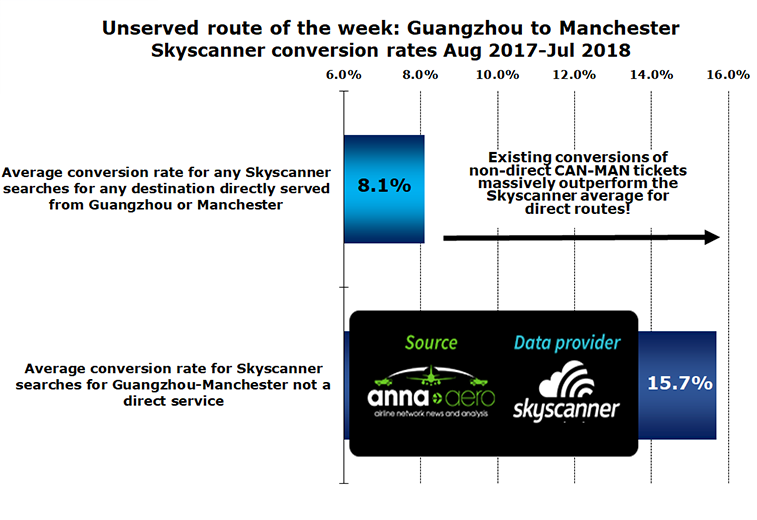 With a lack of direct services, travellers between these two cities have clearly become used to these one-stop alternatives. However, the market demand is extremely buoyant – as the graph above shows, with 15.7% of the Skyscanner searches for these indirect Guangzhou to Manchester services converted into ticket sales – that’s more than the average 8.1% achieved for Skyscanner conversion rates for all direct routes available from either Guangzhou or Manchester. However, with over 120,000 annual searches in the past 12 months, and with the sector being operated by an appropriately-sized aircraft for the type of route, a four or five times weekly service should be immediately viable for the airline choosing to start this potential city pair. “We have seen with our routes to Beijing with Hainan Airlines and Hong Kong with Cathay Pacific that direct flights can not only meet predicted passenger numbers but stimulate demand. Both routes have delivered a significant economic reward to the North, driving a significant increase in exports, inward investment, and international student numbers into the region,” concludes Smith.