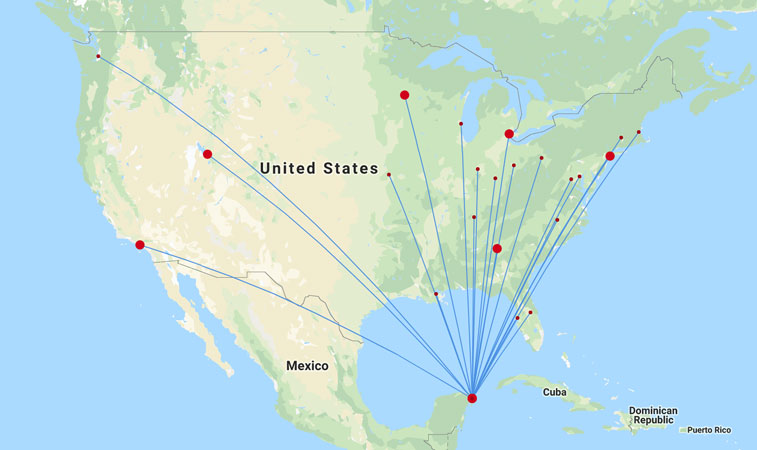 Delta Air Lines has a network of 22 routes to Cancún in 2018, however only six are flown on a year-round basis (shown by the bigger dots), namely Atlanta, Detroit, Los Angeles, Minneapolis-St. Paul, New York JFK and Salt Lake City. The airline’s busiest time at the airport is between January and April, a four-month period which accounts for 46% of the airline’s annual movements from the Mexican resort. The quietest months are September and October, the only two months of the year which see services to just Delta’s year-round destinations based on OAG schedules.

With its crystal blue waters, signature nightlife and its close proximity to the US, it is not surprising that Cancún is Delta Air Lines’ number one international market in the Americas. The SkyTeam member in 2018 is operating 22 routes to the Mexican resort, however of these services, only six are flown on a year-round basis, namely Atlanta, Detroit, Los Angeles, Minneapolis-St. Paul, New York JFK and Salt Lake City. Overall these six routes will account for 87% of the airline’s departures from Cancún in 2018.

Interestingly Delta offers more routes to Cancún than fellow USB3 carriers American Airlines and United Airlines (10 routes each in 2017), however it is the smallest of the three when it comes to annual capacity. In 2017, Delta had just under 948,000 one-way seats from Cancún, placing it as the airport’s sixth biggest operator. Despite this sizeable operation, American had just under 1.39 million departing seats (airport’s second biggest operator) and United 1.22 million (fourth). This suggests that instead of going for number of seats, Delta’s strategy is to offer less frequencies but on more point-to-point markets.

Given its standing as being Delta’s home and largest hub, it comes as no surprise to see that Atlanta is the leading origin airport of choice for the carrier at Cancún, with this route accounting for 35% of all the airline’s seats from the Mexican resort in 2018. However, like many of the airline’s routes to Mexico, it too has a strong seasonality. Unlike many of Delta’s other routes at Cancún, which have seasonality peaks in March, the height of Spring Break in 2018, Atlanta’s busiest month for flights was July, suggesting that the carrier pushes passengers via the hub during peak summer. 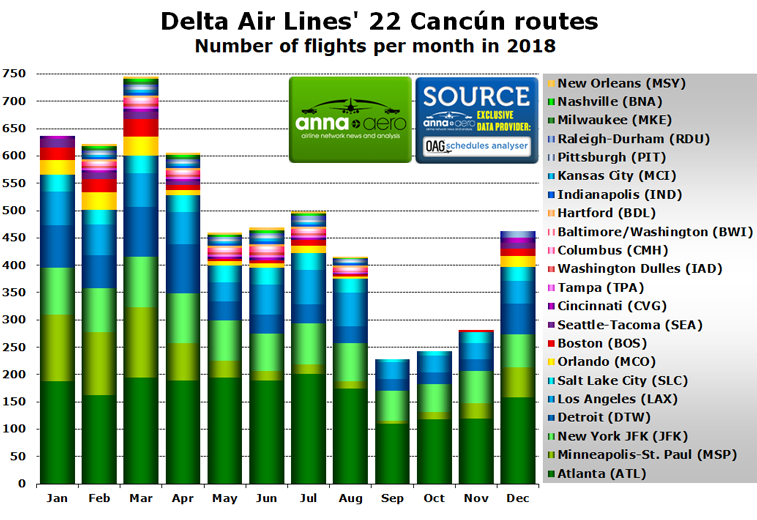 The busiest month for Delta at Cancún is March, with 746 monthly departures. This translates to just over 24 daily one-way rotations for the airline. In terms of the carrier’s quietest month, which is September, only 228 departures take place, an average of 7.6 per day. This means that Delta’s busiest month at Cancún has an operation some 227% greater than its lowest month with regards to movements. Of the 16 routes which Delta operates on a seasonal basis from Cancún, only three provide operations outside of the period between February and August, with Cincinnati, Boston and Orlando also seeing service in December and January based on current scheduled data. The smallest operation for Delta is Milwaukee, with this city pairing only seeing flights in February, March and April, the peak of Spring Break.

Delta’s last route launch which involved Cancún was on 31 December 2016, the day the airline began a weekly seasonal service from Kansas City, with Flightradar24.com data showing that in S18 this route is flown on a Minneapolis-St. Paul-based aircraft. While the carrier’s strategy, when it comes to Cancún, differs from American and United with regards to offering more point-to-point markets, MIDT data suggests that there is room for Delta to add more non-stop services into the Mexican resort from the US. Data from OAG traffic shows that the leading connection market on the domestic front for Delta is Omaha (presently unserved from Cancún), with the SkyTeam member transporting 18,800 two-way passengers via its three leading connecting hubs for Cancún traffic in 2017 – Atlanta, Minneapolis-St. Paul and Detroit. This results in an average PDEW between Omaha and Cancún of 25.8 for 2017. However, while this is relatively low, further analysis reveals that roughly 54% of the estimated 18,800 passengers in 2017 flew between January and April (peak season for US passengers to Cancún), with this increasing the PDEW size during this period to 41.8. With the US city now supporting year-round flights to Toronto Pearson as a result of its investment in greater customs and inspection services, the airport can support Mexico flights. 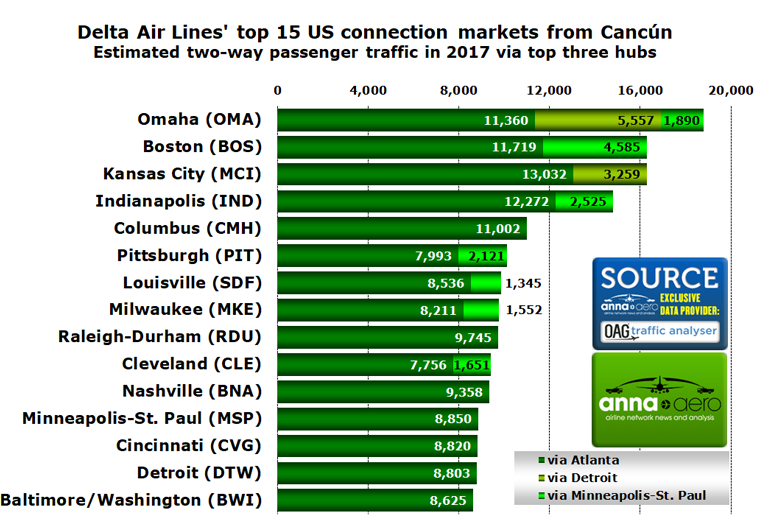 Along with Omaha, only one other route in the top 15 connecting markets for Delta from Cancún is not flown by the airline from the Mexican airport on a seasonal basis, with the airline having carried an estimated 9,880 passengers to/from Louisville last year (seventh biggest connecting market). While the carrier does serve the remaining destinations in the top 15 connection markets at some point in the year, Delta is still carrying 141,000 passengers between these cities via its three leading hubs for Cancún connecting traffic. 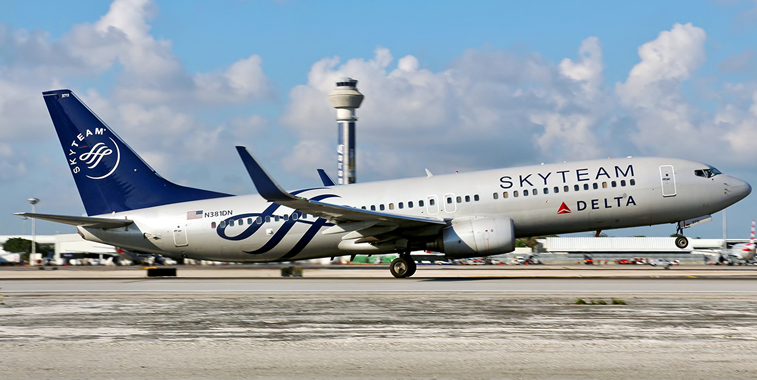 Delta Air Lines certainly has a strong presence in Cancún, operating 22 routes to the Mexican resort in 2018, albeit that only six are flown on a year-round basis. While the network is strong, OAG Traffic Analyser data shows that there is demand for more direct flights, with Omaha being the carrier’s top connecting airport in the US last year, with the SkyTeam member transporting over 18,800 passengers between the US city and Cancún in 2017.