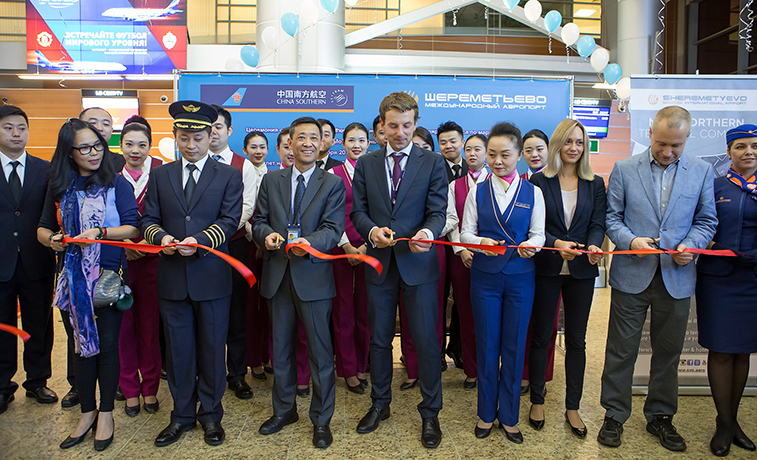 Guangzhou Airport, the host of this year’s World Routes which takes place between 15-18 September, was the third biggest airport in China in 2017, handling 65.81 million passengers. International traffic has been growing at a faster rate than domestic connections, producing an increase in market share from 16% of total passengers in 2008 to 25% last year. One new international link introduced in September 2017 was this China Southern Airlines’ connection to Moscow Sheremetyevo, which was celebrated at the Russian end of the route.

Guangzhou Airport, host of this year’s World Routes which takes place between 15-18 September, is situated in Guandong province in South East China. It was the second largest airport in China until 2015, when it was overtaken by Shanghai Pudong, but due to consistent year-on-year growth, it remains the third busiest facility in the country.

Guangzhou handled 33.44 million passengers in 2008, and by 2017 this had grown to 65.81 million. This is equivalent to a 97% increase in traffic, with the airport practically doubling its passenger throughput over the past 10 years. There were no year-on-year declines in traffic between 2008 and 2017, with the weakest annual increase occurring in 2015 and the strongest growth witnessed in 2009, at a time when many other airports saw cutbacks as a result of the global economic recession. The average year-on-year passenger growth rate over the period was 7.9%. 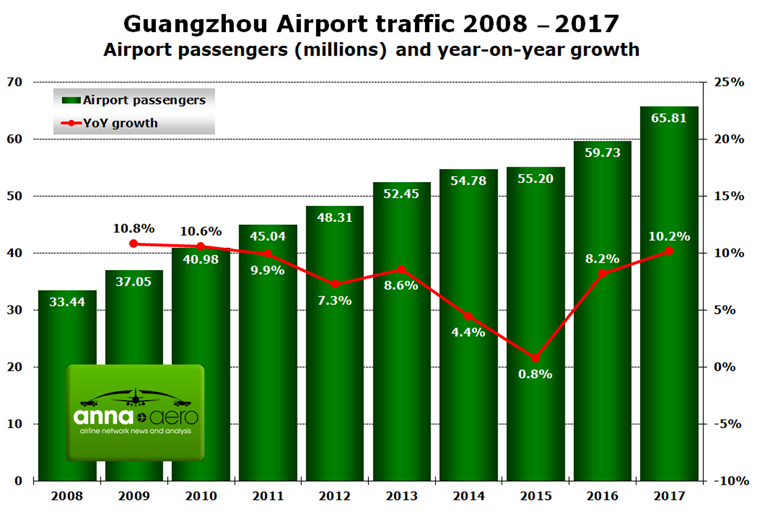 Domestic capacity traditionally represents the majority of seats on offer at Guangzhou, but international links have closed the gap since 2008. In that year, there were 37.40 million two-way seats available on domestic flights serving Guangzhou. This had grown 62% to 60.62 million by 2017. In contrast, there were 7.19 million two-way seats on international flights to and from the airport in 2008, and this had risen to 19.98 million by 2017, equivalent to a 178% increase. As a result, the proportion of Guangzhou’s total capacity available on international flights grew from 16% in 2008 to 25% last year.

According to OAG data, 74 airlines will offer some form of scheduled service from Guangzhou during S18. Since S17, seven new carriers have been added to the departures board, while four have ceased operating to the Chinese airport. All of the top 12 carriers in S18 are Chinese. China Southern Airlines is by far the largest operator, which is unsurprising given that it is the biggest airline in China and Guangzhou is its biggest hub. China Southern will fly to 129 destinations from its main base over the course of S18, with 79 domestic and 50 international links available. It will account for 48% of all seats to and from the airport this summer. The largest internationally-registered carrier operating from Guangzhou in S18 is AirAsia in 13th position. The biggest operator from outside the Asia Pacific region is Emirates, which offers a daily A380-operated flight to its home hub in Dubai. 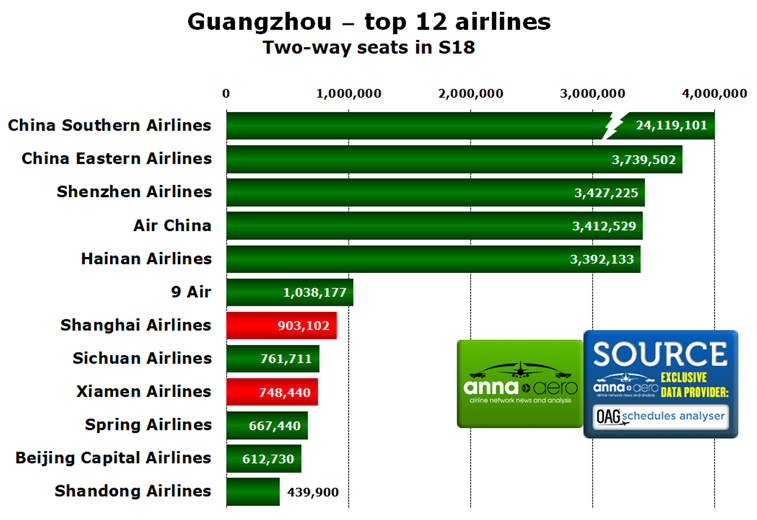 Most of the top 12 operators have expanded their capacity offering at Guangzhou in S18, compared to last summer. The strongest growth among these carriers has come from 9 Air which has upped its seat offering by 53%. The LCC only commenced operations in early 2015, but will provide more than one million seats on flights serving Guangzhou this summer, having introduced five new domestic connections since S17. Two of the top 12 airlines witnessed a decline in capacity this year (highlighted in red). The biggest cut was made by Shanghai Airlines, which reduced its available seats by 11%.

There are scheduled flights available to 181 direct destinations from Guangzhou this summer, including 105 domestic connections and 76 international links, although it should be noted a small number of these routes will only see irregular or limited services. In total, 11 of the top 12 routes are domestic, including the two largest destinations, Beijing and Shanghai Hongqiao. These two links combined will account for 14% of all departing seats from Guangzhou in S18. During the week commencing 4 September, four airlines will provide 186 combined flights from the airport to Beijing, while seven operators will offer 252 combined flights to Hongqiao. The only international destination among the top 12 routes is Bangkok Suvarnabhumi, a link which will see 87 flights offered by seven airlines across the same week. The largest direct destination outside of the Asia Pacific region is Dubai. 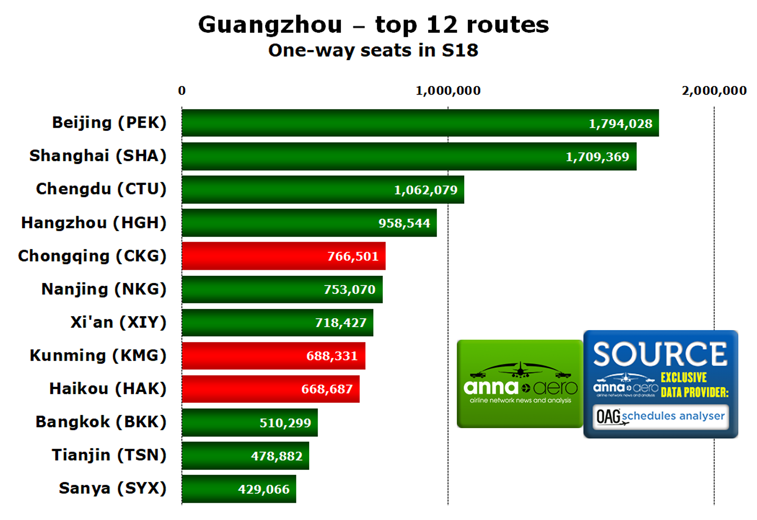 Nine of the top 12 routes experienced an increase in capacity for S18 compared to the equivalent period last year. The biggest increase in seats came on services to Tianjin, with departing capacity on the 1,790-kilometre domestic sector up by 23%. This was largely due to Beijing Capital Airlines and Tianjin Airlines introducing services on the airport pair, joining six other incumbent carriers. Three of the top-ranked routes have witnessed capacity cuts of between 7-8% (highlighted in red). The biggest cuts came on the Haikou connection, with seat numbers 8% down.

It should be noted that this analysis is focused on Guangzhou’s direct connections, although OAG schedules show that a number of other links are available from the Chinese hub via indirect itineraries. At least six international destinations that are not served by direct flights are available indirectly via one-stop itineraries. These are: Nagoya, Frankfurt, Male, Mexico City, Antananarivo in Madagascar and Baku.

Scheduled services will be available to 42 international markets from Guangzhou in S18, with 11 of the top 12 located in the Asia Pacific region. Thailand is the largest country market with more than 950,000 one-way seats available. In total, 11 carriers will offer more than 5,000 one-way flights from Guangzhou to Thailand this summer, with six Thai destinations linked to the Chinese hub. The largest international market outside of Asia Pacific is the US, with New York JFK, Los Angeles and San Francisco all enjoying direct connections. 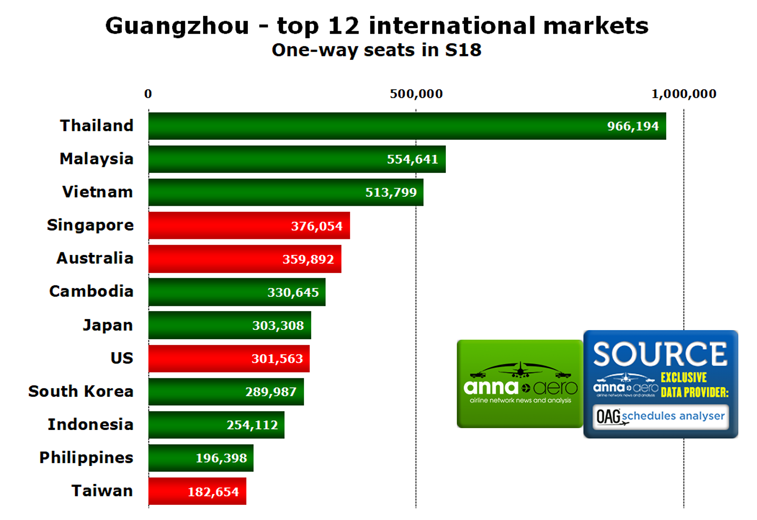 Cambodia has seen the biggest boost in seat numbers among the top 12 international markets from Guangzhou this summer. One-way Cambodian capacity was up 38% compared to S17, with Lanmei Airlines and Shenzhen Airlines introducing services between the Chinese hub and Phnom Penh since last summer. Four other carriers also offer flights to Cambodia from Guangzhou. Capacity was reduced to four international markets since S17 (highlighted in red). The biggest cuts came on links to the US, with seat numbers down 8%. Italy and Israel are new to the departures board since S17, but services to Algeria and the Maldives which operated last summer, have subsequently been discontinued.

According to anna.aero’s New Routes Database, airlines have launched 12 new services to or from Guangzhou in 2018. Those looking to add the Chinese hub to their networks will have the perfect opportunity to make their case when the airport hosts World Routes from 15-18 September. 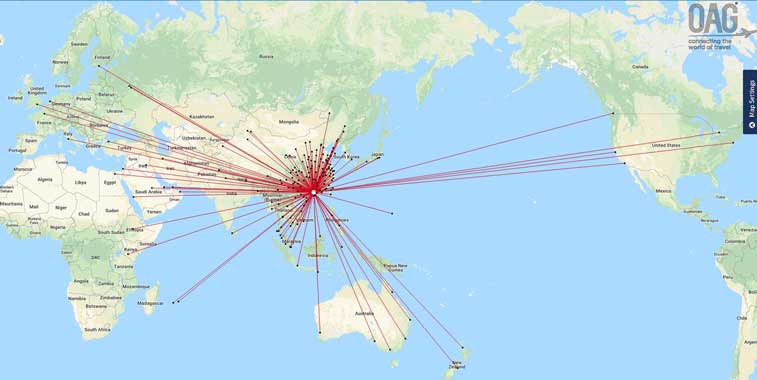 The route map for Guangzhou’s direct connections for S18 highlights the concentration of domestic links available. Domestic traffic accounted for 75% of the airport’s total passengers last year. A number of additional destinations are only available via indirect itineraries. These include: Nagoya, Frankfurt, Male, Mexico City, Antananarivo in Madagascar and Baku.