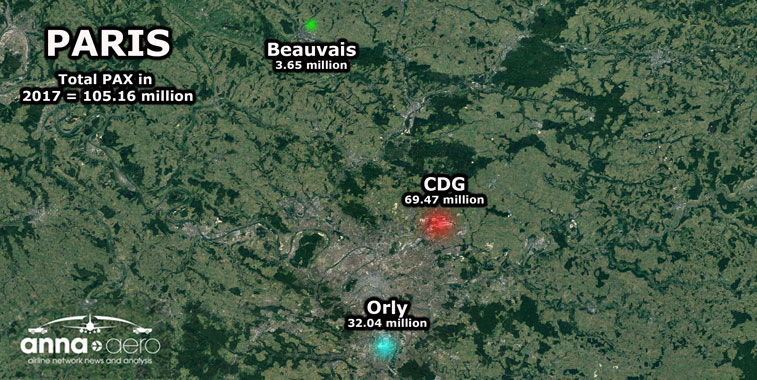 With a metro population of around 12 million, and seeing 23.6 million hotel arrivals in 2017, up an impressive 11% over 2016 according to the Paris Tourist Office, the French capital is certainly a destination in demand, and that is evident in the city’s airport passenger numbers. Last year 105.16 million passengers passed through Paris’ Beauvais, CDG and Orly airports, making the city one of the biggest for commercial aviation in the world. It should be noted that Vatry Airport, some 162 kilometres east of the French capital city, markets itself as Paris Vatry Airport, and last year it handled 108,845 passengers, which would account for only 0.1% of traffic if it was included within the total count for Paris.

Last year saw Paris’ leading airports handle 105.16 million passengers, up 3.9% versus the previous 12 months. 2016 was a monumental one for the French capital, as this was the first time the city’s airports processed over 100 million passengers within a calendar year. During H1 2018, the three facilities handled 51.63 million people, an increase of 2.8% when compared to the same period of 2017. If this growth is maintained for the rest of 2018, then Paris should expect to host just under 108.12 million air travellers. 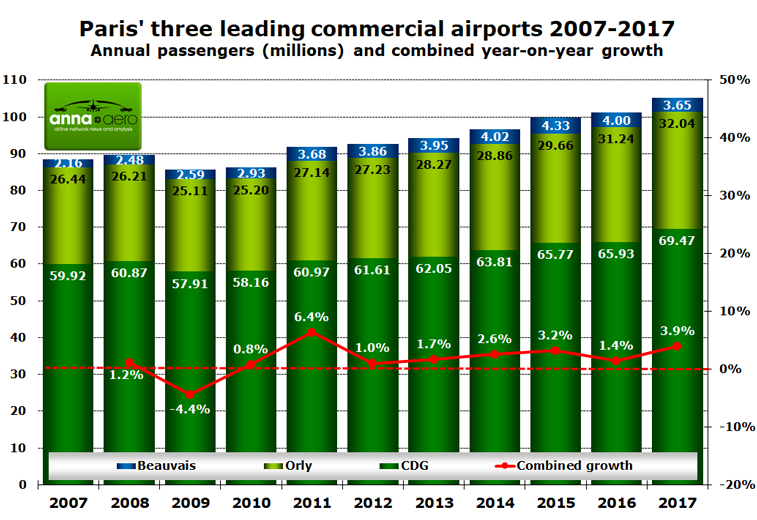 Since 2009, the last year of passenger decline following the last global financial crisis, the number of people passing through Paris’ three main airports has increased by 19.56 million people. This is under half the amount that London has managed to accumulate during the same period. The airport reporting the greatest increase is CDG, with it handling 11.56 million more people last year than it did during 2009. Orly is second, seeing its annual traffic throughput climb by 6.93 million passengers, followed by Beauvais which has increased its annual passenger count by 1.06 million. However, the latter airport posted two consecutive years of traffic decline in 2016 and 2017, handling 680,000 fewer passengers last year than it did two years ago.

Nice is the leading destination from Paris, with airlines offering 181 weekly departures to the South of France city. Interestingly, only one airport in the top 10 is flown to from all Paris airports, including Vatry, with that being Porto (10th largest destination). Interestingly only two routes see service to just one airport, with CDG being the sole beneficiary of Paris’ connections to London Heathrow and Frankfurt. It should be noted however that British Airways did fly between Heathrow and Orly between two and three times daily until 28 October 2017. 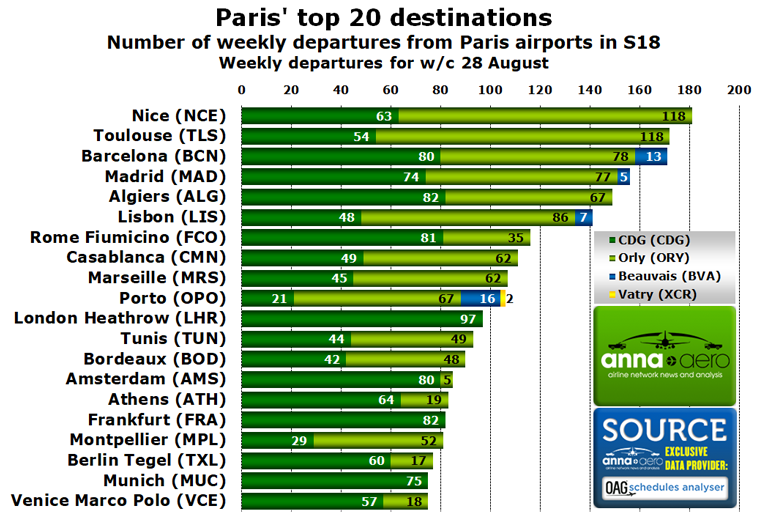 Of the top 20 destinations, all of them are served from CDG, with the capital’s biggest airport having the largest share of weekly frequencies on 10 of the routes. Orly has the largest market share of weekly departures on the other 10 routes in the top 20, including seven of those in the top half of the ranking, namely Nice, Toulouse, Madrid, Lisbon, Casablanca, Marseille and Porto. This summer Paris’ top 20 routes account for 30% of weekly departures from the city this summer. Destinations just missing out on a top 20 place include Tel Aviv (74 weekly departures in S18), Dublin (73), Milan Linate (71), Copenhagen (69) and Ajaccio (67). The first long-haul destination to make an appearance is New York JFK (joint 28th largest route in terms of frequency alongside Marrakech, Moscow Sheremetyevo and Zurich), with it seeing 63 weekly departures in S18. Overall Paris is connected to 338 destinations with at least one weekly rotation this summer, with this based on data for the week commencing 28 August.

It would appear that Ryanair’s stagnation from Paris is continuing in 2018, with the city’s fifth largest operator expected to reduce departing seat capacity by 0.3% this year. This decision by the ULCC supports the reasoning for passenger traffic falling in recent years at Beauvais. Paris’ leading airline is not surprisingly the French national flag carrier, with Air France commanding 43% of capacity in 2018, with this also taking into account flights flown by HOP! However, despite the consistency of Air France and the decline of Ryanair, the eye-catching development of Paris’ top 25 carriers is Norwegian, with it having grown its seat capacity from the French capital by just under 90% this year. This is due to the carrier opening multiple long-haul routes, including its first from Orly to New York Newark. Due to Norwegian’s vast growth pushing it into the top 25 carriers, it means that one airline has left the top tier of carriers, with Aeroflot being demoted to 26th place, despite it reporting a 8.7% increase in seats. 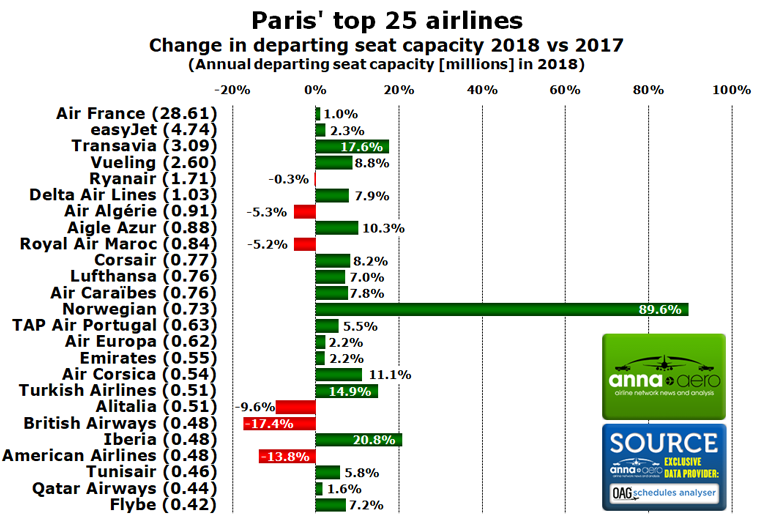 The biggest ‘new’ airline in Paris is LEVEL, however it is not considered brand new due to it taking over OpenSkies services, which operated from Orly last year. Taking this out of the equation, the biggest new carrier is Primera Air (also the biggest new airline in London this year), having opened a long-haul base at CDG. Along with the two carriers mentioned, a further two airlines have entered the Parisian market in 2018 so far, namely WestJet (Halifax to CDG) and Georgian Airways (Tbilisi to CDG). A fifth new entrant will start services latter this year, with Xiamen Airlines beginning flights from Fuzhou to CDG in December. This means of the five airlines that will have launched flights to Paris in 2018, all five have chosen to begin services from CDG, while LEVEL has its long-haul operations from Orly, but its short-haul Vienna service from CDG. 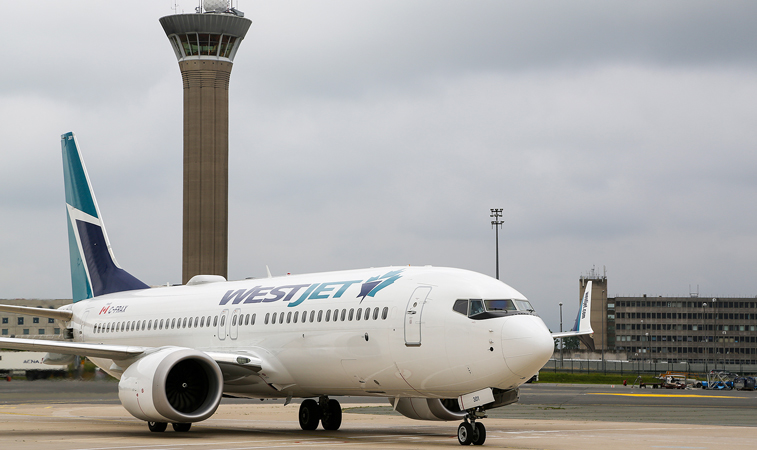 WestJet is one of Paris’ five new operators for 2018, with the others being Georgian Airways, LEVEL, Primera Air and Xiamen Airlines, with the latter planning to begin services to Paris CDG in December. Of the five new brands flying into the French capital this year, all have made CDG their airport of choice, while LEVEL serve Orly on long-haul.