Aer Lingus is crowned ‘The Fastest Airline in the World’ at the Budapest Airport-anna.aero Runway Run 6.0 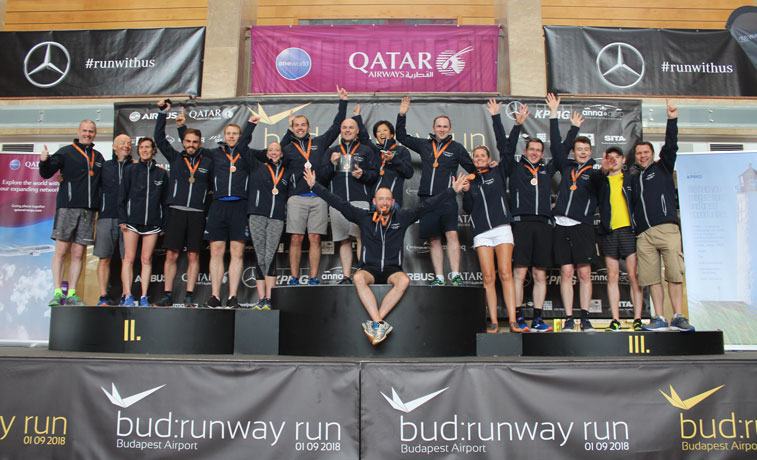 Aer Lingus was crowned ‘The Fastest Airline in the World’ at the Budapest Airport-anna.aero Runway Run 2018, with the Irish flag carrier fielding a team of 16 speedy runners, ranging from pilots and crew to revenue management analysts and the head of revenue. This is the third time that the carrier has won ‘The Fastest Airline in the World’ prize.

“It is a great honour that Budapest Airport can be the host of this aviation and sport event which is unique on the continent, and we are proud to see big teams of major airports such as Athens, Dusseldorf, and Hamburg participating,” says Jost Lammers, CEO, Budapest Airport. “In addition to supporting an active lifestyle and humanitarian goals, the run at our airport also serves as an excellent backdrop for an informal meeting of a multitude of aviation experts from different segments of the industry,” stated Lammers. 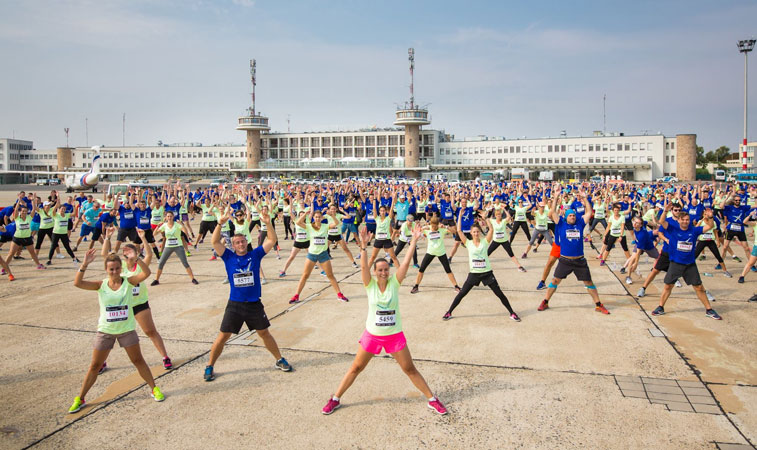 Over 1,100 participants took part in this year’s Budapest Airport-anna.aero Runway Run, with many of the entrants seen here warming up outside the airport’s iconic Terminal 1. Consisting of 5km and 10km race distances, as well as 1.5km for children, runners raced down Runway 1 (13R/31L) of the Hungarian gateway, as the airport closed the normally busy tarmac for the duration of the event. 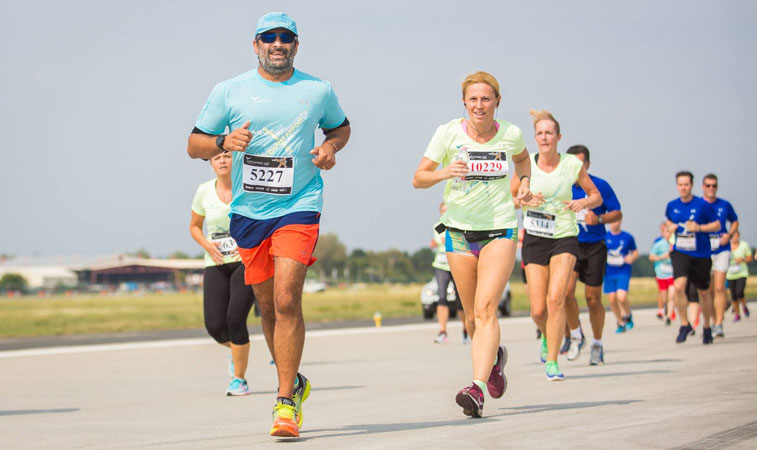 Among the 1,100 racers taking part in the event was Kam Jandu, CCO of Budapest Airport, seen here striding along Runway 1 (13R/31L). While many of those taking part were first-timers, the runway has welcomed some new entrants in another form. Among the new airlines utilising Budapest’s airfield this year are American Airlines, plus LOT Polish Airlines’ 787-8s which now link the Hungarian capital to New York JFK and Chicago O’Hare. 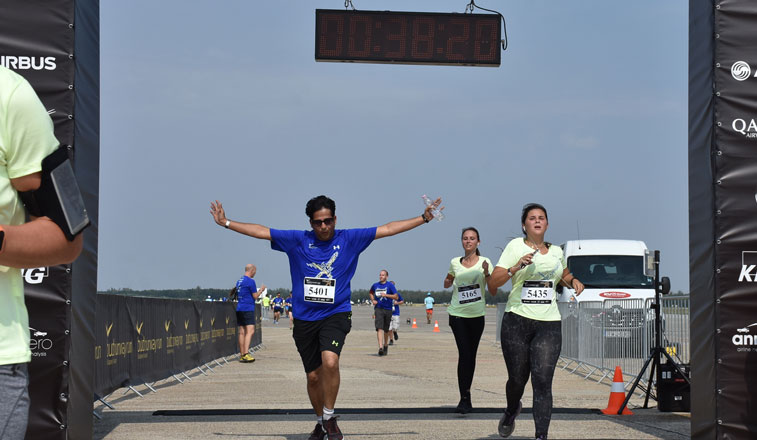 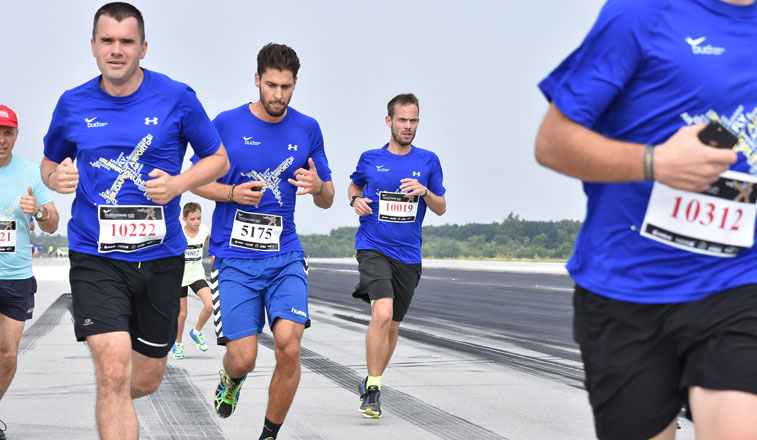 Among the airline partners taking part in this year’s event was SunExpress, with the airline’s Head of Network Planning and Scheduling, Wilken Bellman (centre) seen here hammering down Runway 1 at Budapest. Bellman went on to complete this year’s Runway Run in a time of 43 minutes and 40 seconds. 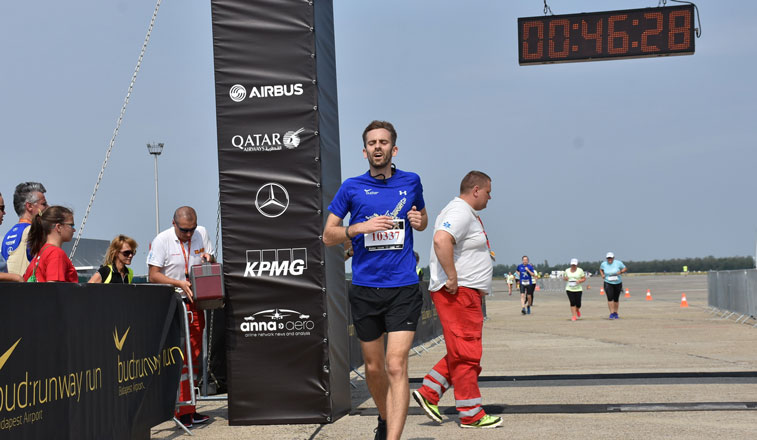 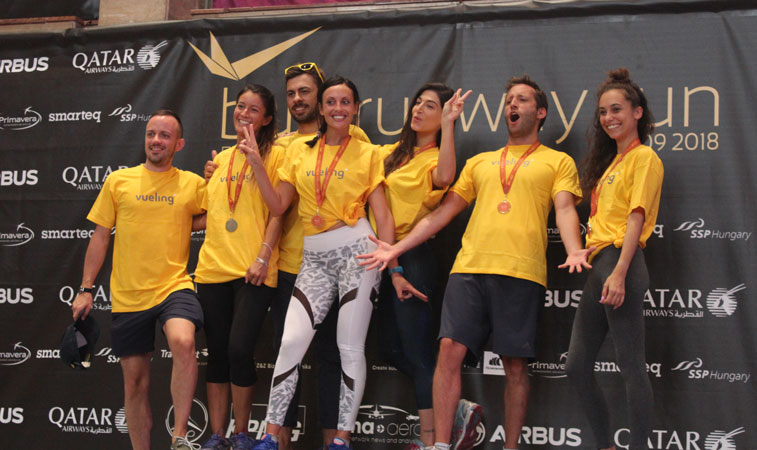 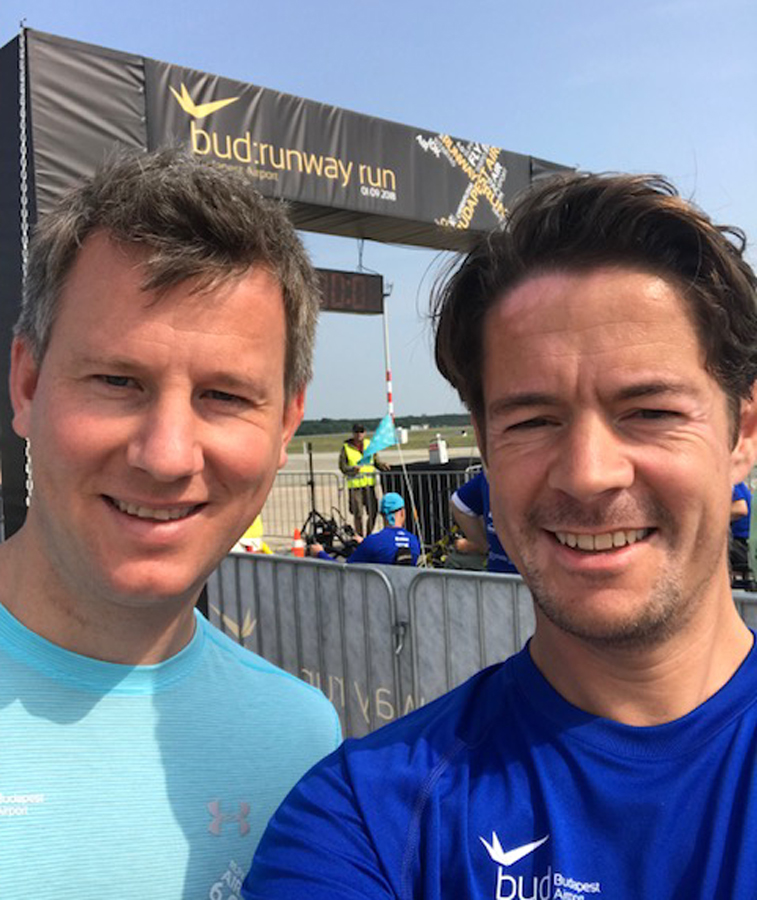 Among the airports taking part in this year’s Runway Run was London Luton. Representing the UK capital airport in Budapest were Jonathan Pollard, CCO and Simon Harley, Head of Business Development. 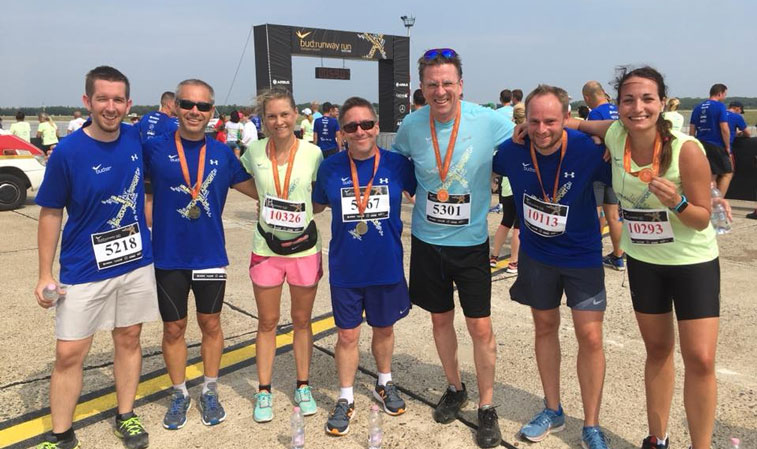 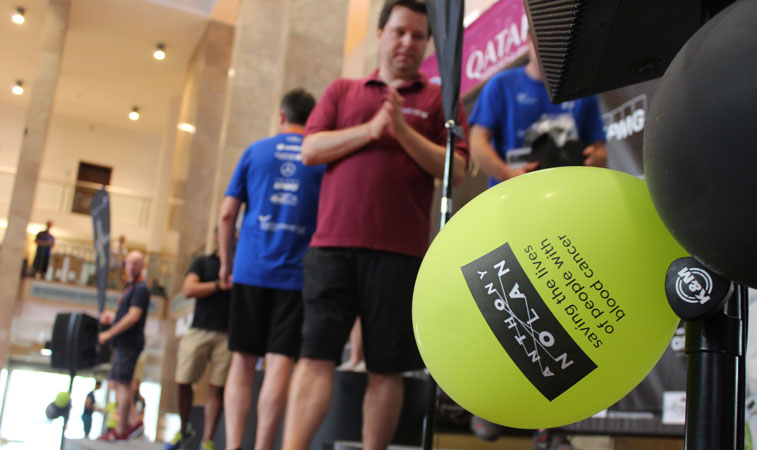 One of the beneficiaries from the money raised on 1 September was the bone marrow transplant charity Anthony Nolan, an organisation that is very close to anna.aero Publisher Paul Hogan’s heart.  “I continue to be ever-grateful to Budapest Airport, Airbus, Qatar Airways and all 1,100+ sportsmen and women from the airlines, airports and air transport community who stepped-up to take part on the day,” commented Hogan.

Among the 1,100 runners in Budapest on 1 September was Carol Thomas, a retired American Airlines worker who was taking part in her 25th runway run, having previously taken part in runs across the world, including at London Luton, Inverness, Chicago’s Midway and O’Hare, New York JFK, Tulsa and Kona airports. “One day I saw a post card that said, ‘Run O’Hare,’” recalls Thomas. “And I thought, I’ve worked at the airport for 41 years, how come I didn’t know you could run the runway? So I signed up to run O’Hare.” Having caught the bug, Thomas plans to continue clocking up more miles on the world’s runways. 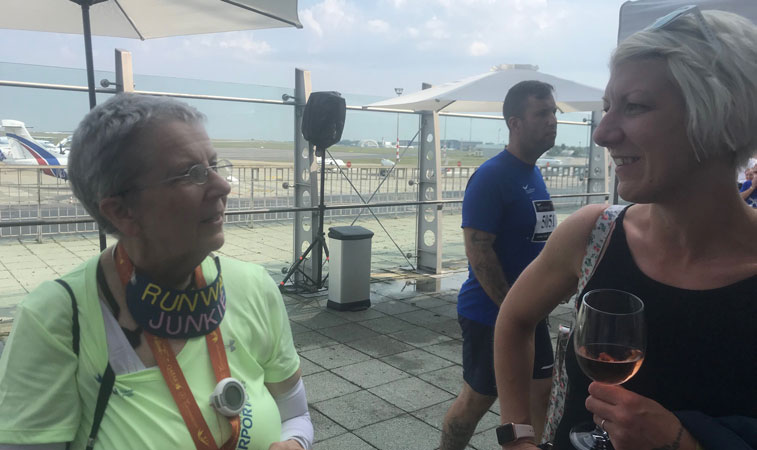 Carol Thomas, a retired American Airlines worker, travelled all the way from Chicago to take part in this year’s Budapest Airport-anna.aero Runway Run, with the ‘Runway Junkie’ telling anna.aero’s Key Account Manager Kerry Parks all about her global travels, allowing her to take part in runway runs all around the world.

Once all of the runners had crossed the finishing line, allowing the airport’s operations team to get the runway ready for movements in just under two hours, it was time to head back into Budapest’s historic Terminal 1 for the awards ceremony. Here it was revealed who had won the coveted titles of fastest male/female; fastest airline/airport team; fastest concessionaire; fastest enterprise; fastest hotel + tour operator; and fastest embassy, while all participants received ‘The Bron’s Medal’ as they crossed the line. 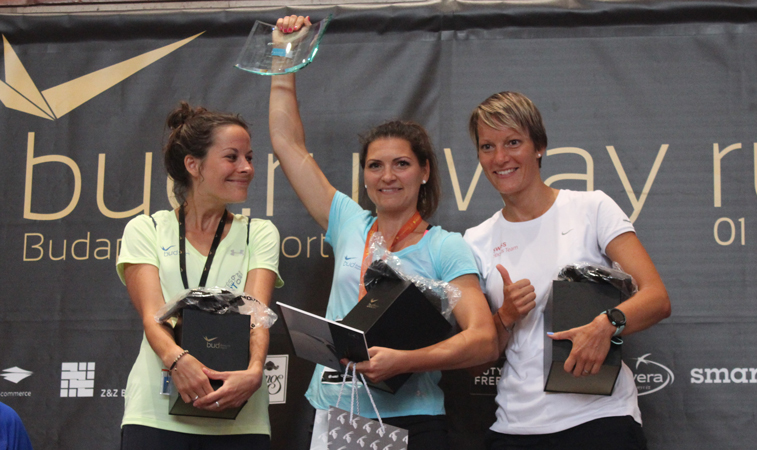 The winner of the women’s 5km race was Budapest Airport’s very own Airline Marketing Manager Nikolett Huszák (centre), who finished the race in a time of 23 minutes and 50 seconds. Second place was also taken by an airport representative, namely Eszter Szöllösi, Recruitment Specialist (left). Third place was claimed by SWISS’ Rita Seifert (right). 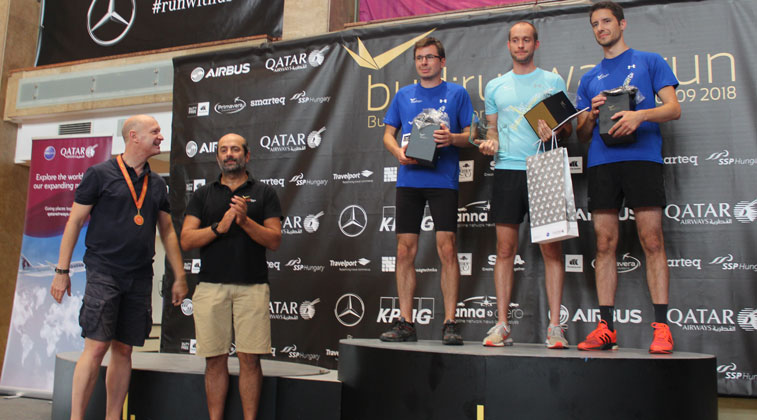 The next award presentation was for the 5km men’s race, with awards in the individual categories being presented by the airport’s CEO and CCO Jost Lammers and Kam Jandu. The overall winner of the 5km men’s race was, like the women’s title, taken by an airport worker, with Balázs Csuka, a Strategic Buyer for the airport (second right) taking home the coveted prize, completing the course in a time of 18 minutes and 42 seconds. Second place was awarded to Zoltán László Molnár (centre) and third to Tamas Gollner, (right). 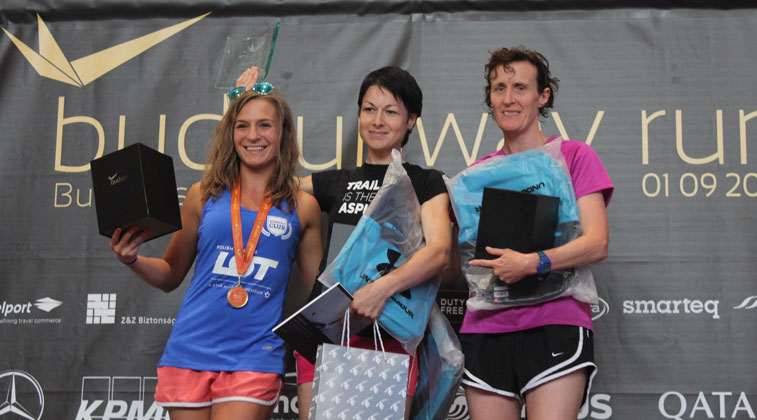 There then followed the award presentation was for those that took part in the women’s 10km race. The winner was Cecília Szőke, Marketing & Communication Specialist, KPMG Hungária (centre), completing the run in a time of 41 minutes and 54 seconds. Second place went to LOT Polish Airlines’ Agata Pietras, with third going to Aer Lingus’ Orla Gormley. 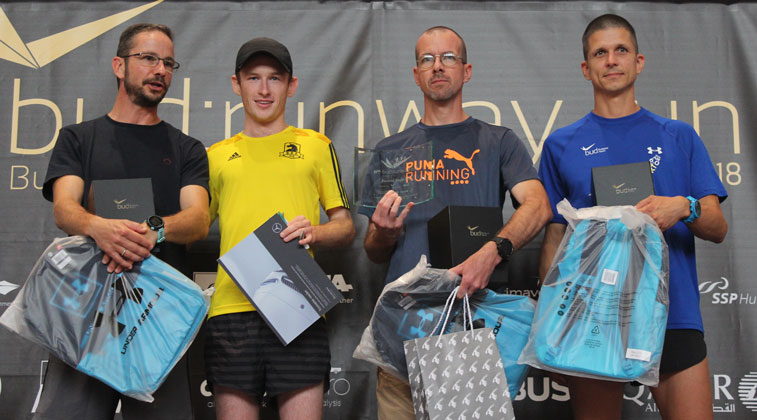 The final individual prizes were awarded to those that finished at the top of the men’s 10k leaderboard. The joint winners of the 10k runway race were Aer lIngus’ Neil Murphy (second left) and Gábor Vas (second right). Second place was awarded to Gergely Kollin, Area GM Economy Hotels Accor Hungary, with third being taken by Kristof Petendi, MCC Duty Engineer, Wizz Air. With the individual awards presented, it was time to move on to the team prizes. 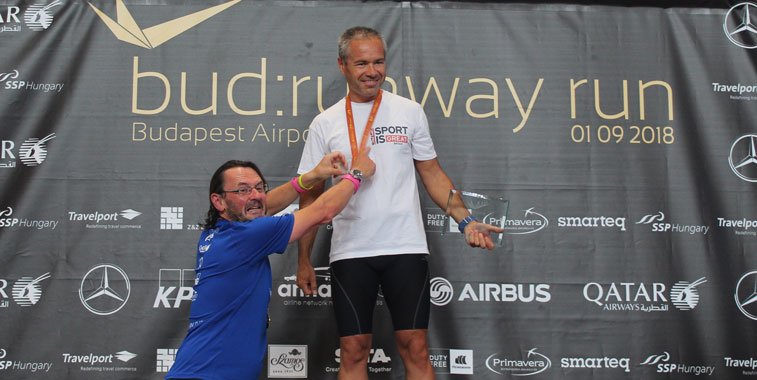 The first team award to be presented was the ‘Fastest Embassy’. The winner of the award this year was the British Embassy, with the award being collected onstage by Viktor Darmstädter, Transport & Security Manager, while anna.aero Publisher Hogan highlights the great in Great Britain on Darmstädter’s shirt, in aid of the team’s impressive win. 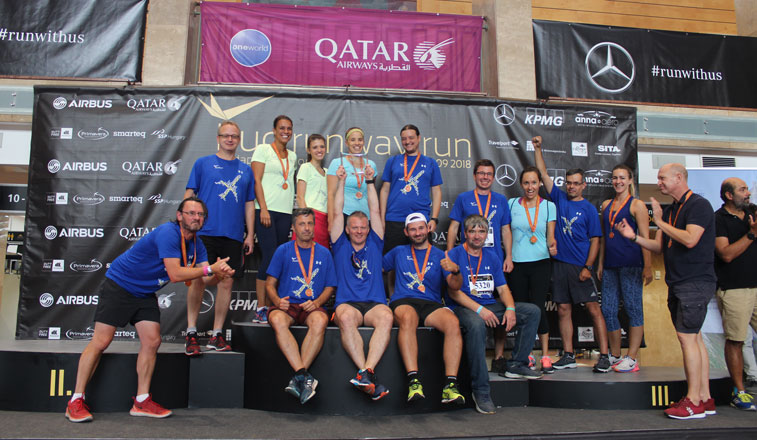 The winning team in the ‘Fastest Tourist Company’ category was Marriott, with the company’s competitors collecting the prize from anna.aero Publisher Paul Hogan and Budapest Airport CEO Jost Lammers. 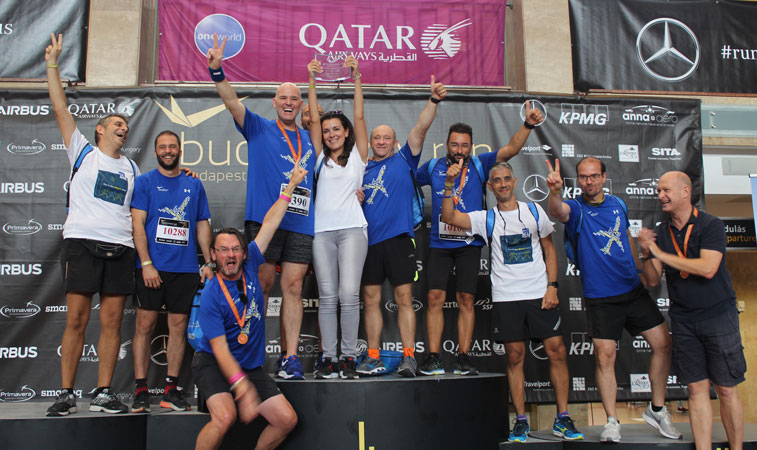 The ‘Fastest Airport in the World’ prize this year was won by Athens Airport, with the Greek capital facility beating off competition from peer airports including Berlin Brandenburg, Düsseldorf, London Luton, Montpellier, Munich, Stockholm Skavsta and Vienna, as well as the strong Budapest Airport team. 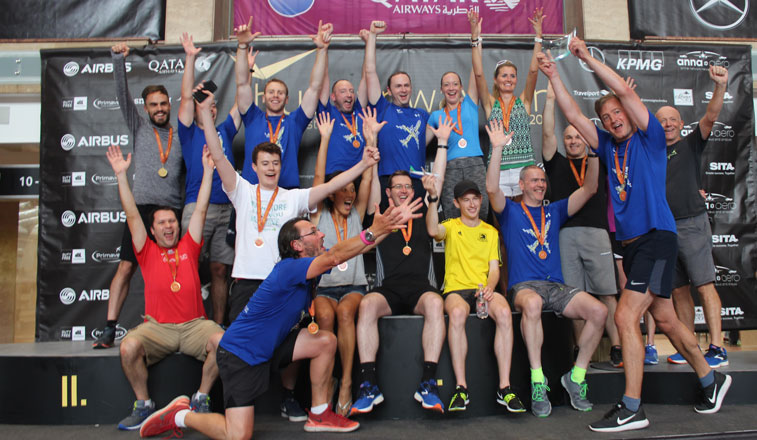 Finally, beating off competition from an array of other carriers, it was Aer Lingus which claimed victory in Budapest, winning the top prize – ‘Fastest Airline in the World’.