Eindhoven-Istanbul is “Skyscanner Unserved Route of the Week” with 42,000 searches; Schiphol capacity reliever for Turkish Airlines?? 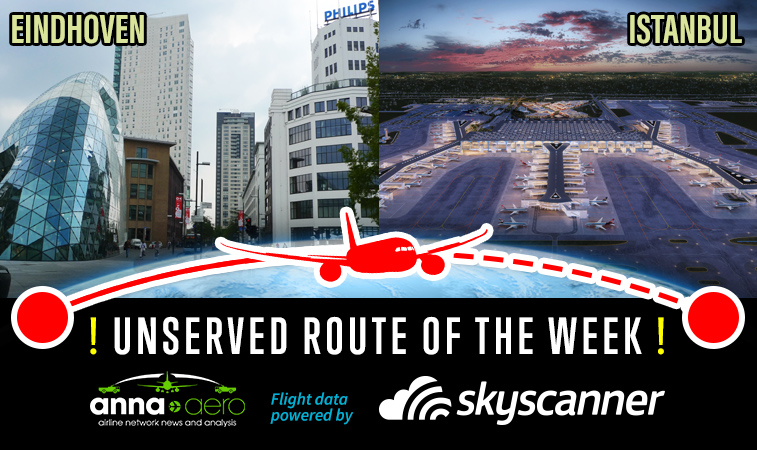 Scheduled to open next month, the city of Istanbul and home carrier Turkish Airlines will both benefit from its purpose-made new hub. One of the first new routes to launch from the global gateway, with an ultimate capacity of 200 million annual passengers, should be a service to Eindhoven, thanks to the Skyscanner data showcased here. anna.aero’s HubLab moves to Istanbul next year, where it will be embedded in the İGA-hosted New Airport Show Istanbul.

With nearly 42,000 searches in the last 12 months, a potential city pair from Eindhoven to Istanbul Atatürk has been identified as this week’s “Skyscanner-anna.aero Unserved Route of the Week” – a powerful analysis based on aspirational data captured from the Skyscanner.net flight comparison site used by +70 million unique visitors per month. “In June we had a questionnaire with our passengers and one of the questions was: ‘Which destination do you miss from Eindhoven?’ The most requested destinations were Istanbul, Berlin and Munich,” states Dean Boljuncic, Head of Route Development, Eindhoven Airport. 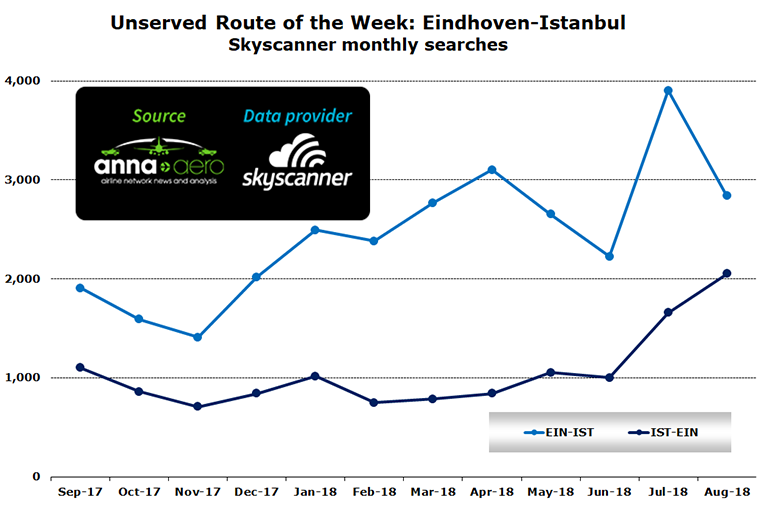 anna.aero thinks Turkish Airlines should take on this service

Skyscanner demand on this week’s unserved route shows a significant preference towards the Dutch end of the city pair, with a 70/30 split, so on this basis we looked at potential carriers at the Eindhoven origin first. According to OAG schedules for the week commencing 4 September, the largest carrier at Eindhoven is Ryanair (43% share of weekly seats). The ULCC’s route network from the airport presently consists of 44 destinations, of which four are in the south-east Mediterranean (Skiathos, Chania, Athens and Corfu), but none are in Turkey. Ryanair currently only flies two routes in Turkey, these being weekly operations to Dalaman from Dublin and Bratislava, and therefore none to Istanbul at this time. That said, as exemplified by its growth in Jordan this winter, the Turkish market would seem ripe for the carrier to expand into, if the nation’s airports are prepared to do the sort of tempting deals that attracts the likes of Ryanair.

Transavia is the second-largest carrier (33% share of weekly seats) at the Dutch airport, presently offering 23 non-stop destinations. Five of these are found in the south-east Mediterranean, namely Tel Aviv, Heraklion, Athens, Kos and Rhodes, but again no destinations in Turkey. It does offer three Turkish points from its biggest operation at Amsterdam, with four times weekly flights to Antalya, twice-weekly to Bodrum and weekly to Dalaman, but Istanbul is absent from its network. In the short-term at least it would seem that the best option for the airport pair to gain service is likely to come from Atatürk.

Contemplating the Turkish end of the route, Atatürk’s leading capacity provider of its current 54 serving airlines is, unsurprisingly, Turkish Airlines, which offers 81% of the airport’s weekly seats. While the carrier already heavily serves Amsterdam, with four daily flights feeding into its departure banks at its global hub (it also flies daily from its secondary hub at Istanbul Sabiha Gökçen), it does not serve any regional points in the Netherlands yet. With 23 of these weekly departures already flown by the Star Alliance carrier’s wide-body fleet (its A330-200s and -300s are used), Turkish Airlines is perhaps close to ‘maxing out’ on its Amsterdam operation. In order, to free up fresh capacity at the Dutch capital city airport and prevent the ‘maxing out’ situation, a potential service to Eindhoven would relieve the capacity stress at Schiphol but also allow the airline to grow its seats in the market. On this basis, and with this compelling Skyscanner data now in evidence, there appears to be no barriers in the way to obstruct Turkish Airlines from starting to seriously consider its first regional Dutch route.

Mid-winter is likely high travel period from both ends

When looking at the previous year of search data (graph above), the busiest month (from Eindhoven) is July 2018, with nearly 4,000 searches. On this basis the anticipated booking profile of the route has been allocated as short-haul leisure, resulting in around 62% of travellers on this potential sector wanting to book between seven to four months before departure. This would seem to indicate that the busiest months for traffic will be between November and February. Using the same methodology for the Turkish end of the sector, the peak months for traffic will be between December and March.

Despite the leisure bias to this potential route, Boljuncic is keen to stress the catchment’s business traveller credentials. “In addition to the well-known companies such as Philips, ASML, Tesla [the only factory outside of US], VDL, Vanderlande and DAF, we should not forget the importance of Brainport Eindhoven in an already world-class, high-tech region. This business background is the main economic driver of Eindhoven Airport.”

According to OAG Traffic Analyser, and because there are no European hub carriers serving Eindhoven, there is no connecting traffic data available for the last 12 months (year ending June 2018). This would tend to suggest that the majority of passengers will be driving from Eindhoven’s catchment to Amsterdam (127km away), Brussels (127km) or Düsseldorf (117km) to catch a Turkish Airlines flight from these competing airports. “We believe there is a market for over 10 million journeys to Istanbul and beyond in this part of Europe. Our natural share of the point-to-point and onward sectors is over 360,000 passengers per annum,” adds Boljuncic. 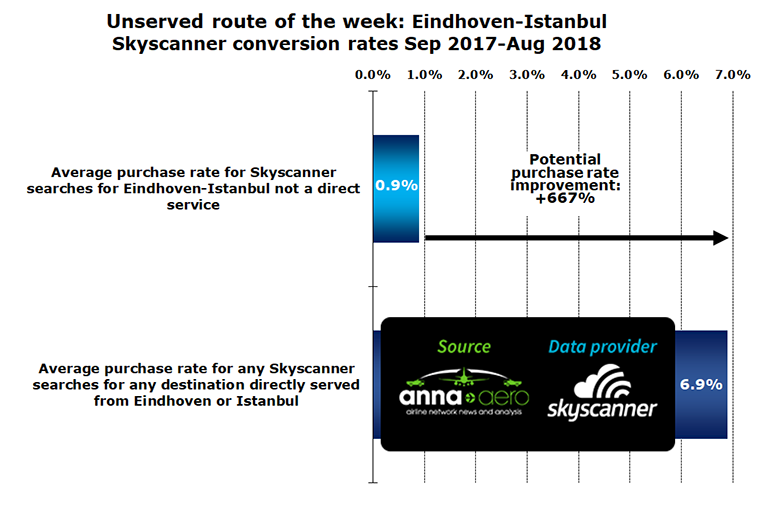 Indeed, an O&D market that is not served by a non-stop flight, or in Eindhoven’s case even by hub carriers, will typically display a low purchase rate and low traffic. In this instance Skyscanner’s Travel Insight indicates a monthly average purchase rate of 0.9% for the Eindhoven to Istanbul route (see graph above). Therefore, if there was an Eindhoven to Istanbul route, and if bookings performed in line with the “Skyscanner market average” for direct services at both airports (6.9%), the airline operating this route could immediately expect an improved purchase rate of a whopping 667%, without any increased marketing spend. However, with around 42,000 annual searches in the last year, and with the sector being operated by an appropriately-sized aircraft for the type of route, a three or four times weekly service should be immediately viable for the airline choosing to start this potential city pair. “For Turkish Airlines, we think that an Eindhoven route to its hub would be similar to its Luxembourg service when it comes to point-to-point passengers, and for beyond traffic its would be close to the levels it experiences on its Gothenburg sector,” concludes Boljuncic.