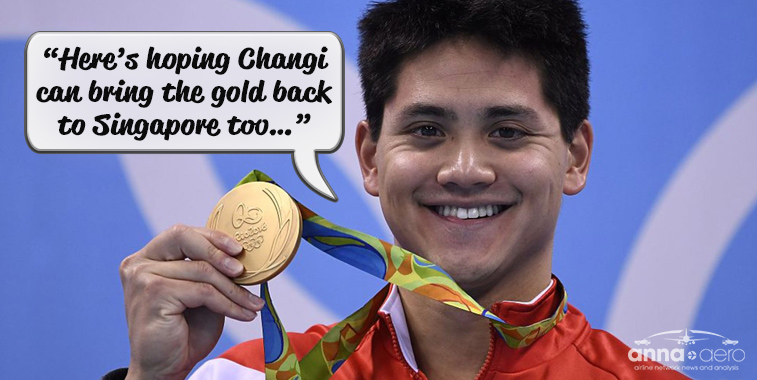 It was smiles all round in Singapore during the 2016 Summer Olympics when Joseph Isaac Schooling stunned the world to beat Michael Phelps in the 100-metre men’s butterfly, with Schooling also claiming an Olympic record time of 50.39 seconds. The nation’s Changi Airport will be wanting to bring back more gold from this year’s World Routes Marketing Awards, but first it must beat some of the world’s leading hubs, namely Amsterdam, Hong Kong, London Heathrow and Kuala Lumpur. The winner will be revealed on 17 September in Guangzhou.

With under two weeks to go until World Routes kicks-off in Guangzhou, anna.aero continues to hear from the airports nominated for this year’s World Routes Marketing Awards. Having already received the thoughts and hopes from the airports nominated in the ‘under 4 million’,’4-20 million’ and ’20-50 million’ categories, this week we have input from those airports selected in the ‘over 50 million’ passenger category. Read about what makes Amsterdam, Hong Kong, London Heathrow, Kuala Lumpur and Singapore airports special and worthy of winning the award.

Sweet taste of stroopwafels shines a light on Schiphol – Amsterdam 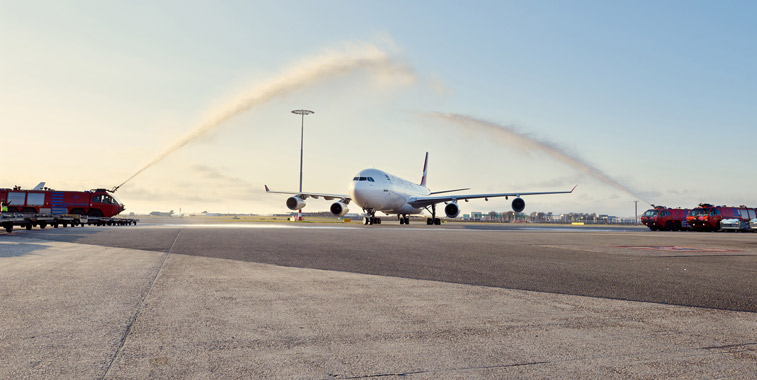 One of the newest carriers to grace the tarmac at Amsterdam this year is Air Mauritius, which commenced twice-weekly services from the Indian Ocean isle on 26 March, touching down for the first time in the Netherlands the following morning, and receiving a water arch salute on arrival. “The Dutch Sky is mastered by 101 airlines, and since 2016 we have welcomed eight new airlines, 37 new destinations and 87 new routes,” comments Wilco Sweijen, Director Route and Business Development, Amsterdam Airport Schiphol, talking to anna.aero about the airport’s nomination for this year’s awards.

“Amsterdam Airport Schiphol is delighted to be shortlisted for the upcoming World Routes Marketing Awards,” comments Wilco Sweijen, Director Route and Business Development, Amsterdam Airport Schiphol. “Over the past few years we have experienced strong growth and welcomed nearly 70 million passengers in 2017. Our network now consists of 326 destinations, with this year seeing 10 new destinations being, or are soon to be, added: Fortaleza, Orlando, Alghero, Kiruna, Beirut, Eilat, Zadar, Zanzibar, Mombasa and Vaxjö.” While this is certainly impressive, Sweijen further demonstrated the power of Amsterdam in recent years. “The Dutch Sky is mastered by 101 airlines, and since 2016 we have welcomed eight new airlines, 37 new destinations and 87 new routes. Airlines at Schiphol are now facing challenging times dealing with the capacity constraints at our airport. For us, the time ahead will be focused on continued support of our airline partners until we are able to grow again. This means that we believe in partnerships in which we hear and learn from each other and grow together. This nomination is proof that airlines believe in us and it gives us extra energy for the challenges that lie ahead.” For those delegates with a sweet tooth, they will be delighted to know that a Schiphol sweet treat will be back. “We will be at World Routes in full force and will bring with us our world famous stroopwafels – they will be baked on the spot!” 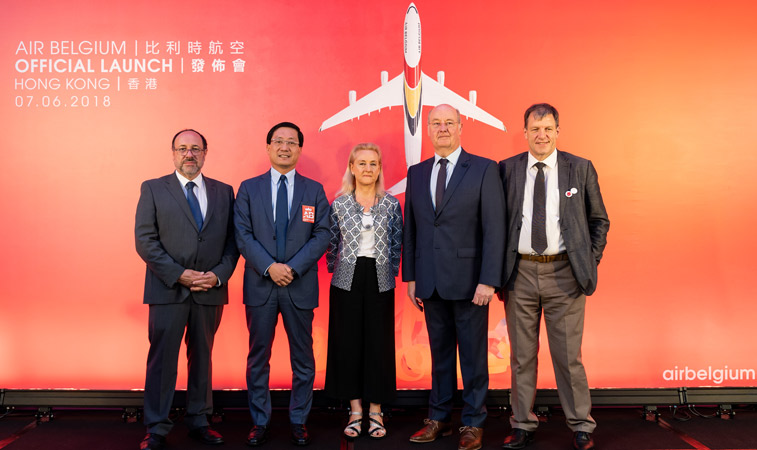 Hong Kong International Airport (HKIA) hosted just under 72.87 million passengers in 2017, a 3.3% rise from the total figure of 70.51 million in 2016. For the first seven months of 2018, the hub has processed over 42.24 million passengers, representing a growth rate for the the year so far of 3.1%, showing that Hong Kong is certainly an airport that is still expanding, with many new routes having been added during the past few months. Home-based operator Cathay Pacific Airways has added flights to Brussels, Copenhagen and Dublin in Europe, while flights to Washington Dulles in the US and Cape Town in South Africa will be added in the coming weeks and months. The oneworld airline has already confirmed Seattle-Tacoma as its newest service for S19. Along with Cathay Pacific’s network additions, Hong Kong Airlines has also been in expansion mode, adding routes to Male, Manilla, Moscow Vnukovo and San Francisco. Away from based operators, Virgin Australia Airlines recently added its second route to Hong Kong from Sydney, adding to its Melbourne services which began in July 2017. One new airline to the airport this year is European start-up Air Belgium, with it commencing operations from Brussels Charleroi.

Her Majesty will be amused by a UK win – London Heathrow 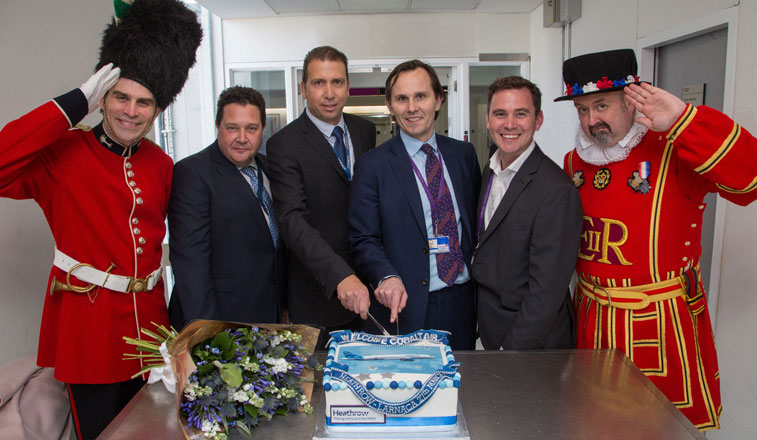 London Heathrow hosted two new airlines in 2017, namely Beijing Capital Airlines and Flybe, while in 2018 the number of new entrants has doubled to four, with Cobalt, along with Chinese carrier Hainan Airlines, Tianjin Airlines and soon-to-launch Shenzhen Airlines, making Heathrow a new node on their respective networks. Among those at the Cobalt launch were Paul Simmons, CCO, Cobalt (second left) and Ross Baker, CCO, London Heathrow (third right).

Europe’s busiest airport, London Heathrow is full to capacity. However, the UK hub has welcomed a number of new services and carriers in recent years. 2017 witnessed home carrier British Airways begin year-round or seasonal flights to Brindisi, Grenoble, Montpellier, Murcia, Nantes, New Orleans, Pula, Santiago, Tallinn, Tenerife South, Turin, Zakinthos. Along with BA’s expansion, 2017 also saw Virgin Atlantic Airways begin flights to Barbados and Seattle-Tacoma, plus Delta Air Lines start seasonal flights from Portland. In addition to these developments, carriers including Beijing Capital Airlines and Flybe commenced operations, with the former beginning services from Qingdao in China, while the latter started domestic routes from Aberdeen and Edinburgh. In 2018 that success has continued, with Heathrow already welcoming Cobalt, Hainan Airlines and Tianjin Airlines, while a fourth new carrier, and third from China, will add flights in October, with Shenzhen Airlines beginning flights from its home base in the southern Chinese city. As well as these arrivals, United Airlines has introduced a seasonal service from Denver, BA has added more new routes, including the first-ever transatlantic flights to Nashville. Other network developments include China Southern Airlines adding non-stop service to Sanya and Wuhan, Royal Brunei going non-stop from its home hub, while Qantas has inaugurated a ground-breaking, non-stop service from Perth in Australia. 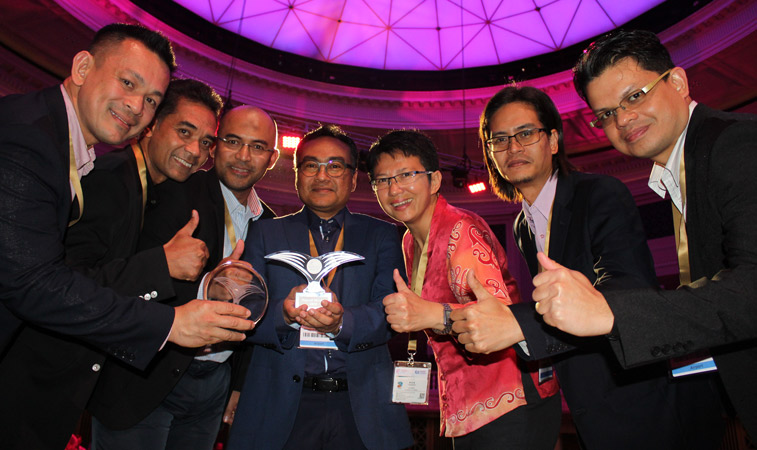 Kuala Lumpur International Airport (KLIA) won the lead Routes Asia Marketing Award at the regional conference back in March in Brisbane, with the airport hoping to relive the feat at this year’s World Routes Marketing Awards in Guangzhou on 17 September. Holding the trophy in Australia is Sallauddin Mat Sah, GM – Airline Marketing, Malaysia Airports.

Kuala Lumpur International Airport (KLIA) was the overall winner at the Routes Asia Marketing Awards back in March, being presented with the trophy in Brisbane. Over 58.55 million passengers passed through KLIA during 2017, a rise of over 11% versus the 52.64 million that travelled from the airport in 2016. So far this year a number of new routes have been opened up from KLIA, including Malaysia Airlines inaugurating services to Routes Asia 2018 host Brisbane, while AirAsia X has commenced services to Amritsar and Jaipur in India. Another part of the AirAsia Group, AirAsia has also added services from KLIA to the likes of Hua Hin in Thailand, while Malindo Air has introduced operations to Melbourne (via Denpasar) plus a domestic connection to Labuan. 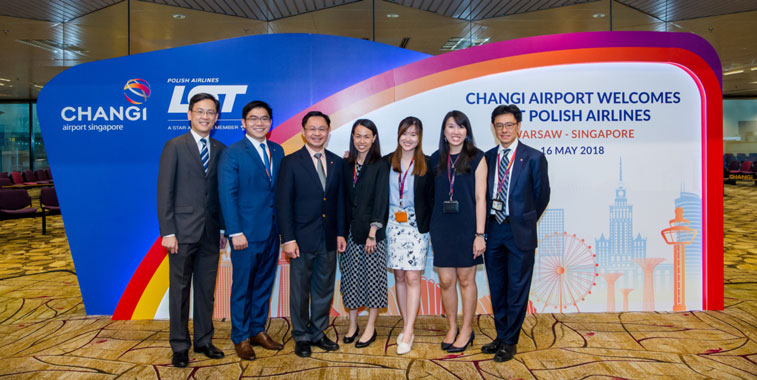 One of the many new airlines to have launched flights to Singapore during the past 12 months is LOT Polish Airlines. Among the airport’s air hub team pictured at the first flight ceremony from Warsaw Chopin are: Lim Ching Kiat, MD Air Hub Development (first left); Yam Kum Weng, EVP Airport Development (third left); and Donald Tan, VP Airline Development. “Changi Airport is honoured to be nominated for the ‘over 50 million’ passengers category at World Routes 2018. This is possible only through the strong support of our airline and other industry partners,” comments Ching Kiat.

“Changi Airport is honoured to be nominated for the ‘over 50 million’ passengers category at World Routes 2018. This is possible only through the strong support of our airline and other industry partners,” comments Lim Ching Kiat, MD Air Hub Development, Changi Airport Group to anna.aero. “We have seen steady growth at Changi Airport this year with stronger connectivity. In Europe, we welcomed new city links to Berlin and Warsaw which are operated by Scoot and LOT Polish Airlines respectively; today, Changi is the only Southeast Asian airport with links to these two cities. We also saw the resumption of Singapore-Munich services by Lufthansa and return of Qantas’ Australia-London services via Singapore, which makes Changi the most connected international airport to Australia with links to nine Australian cities and more than 230 weekly services. Closer to home, the addition of new city links to Guwahati in India and Nanchang in China has increased our connectivity to a record number of 16 cities in India and 36 cities in China. Last year, we also registered a record in cargo tonnage and launched the Pharma@Changi initiative, together with nine partners from the air cargo supply chain. The community aims to enhance Changi’s capabilities and position it as the premier air cargo hub for pharmaceutical trade flows.”

The winners of the World Routes Marketing Awards 2018 will be announced at the conference in Guangzhou on 17 September, with either Amsterdam, London Heathrow, Hong Kong, Kuala Lumpur or Singapore to be among the winners. Along with the ‘over 50 million’ category, a further five awards will also be presented on the night, with the nominees in these categories sharing their views with anna.aero over the coming weeks leading up to the event later this month.