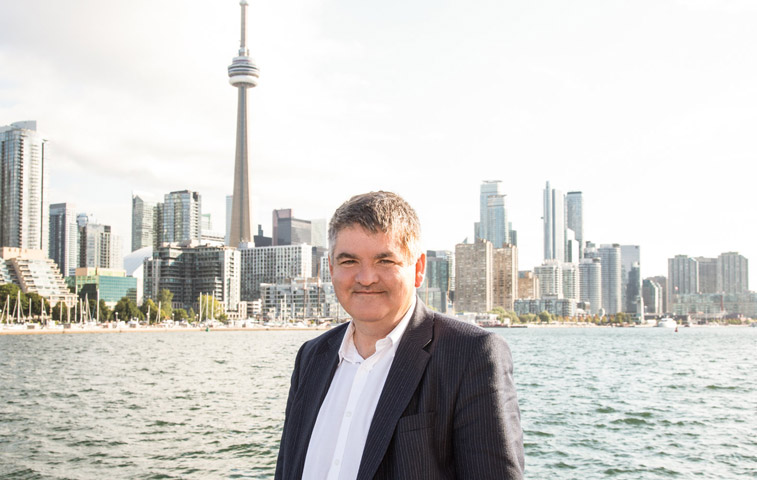 Neil Pakey, the new CEO of Nieuport Aviation, operators of Toronto City Airport terminal, effective 24 September 2018. “Neil is an accomplished leader with deep relationships in the aviation and aerospace industry, and we are delighted to welcome him to Nieuport Aviation and the award-winning Billy Bishop Airport,” said Gregory Smith, President and CEO of InstarAGF and Executive Chairman of Nieuport Aviation’s Board of Directors.

anna.aero can exclusively reveal that Neil Pakey, Chairman of Regional And Business Airports Group (RABA), has been appointed as the new CEO of Nieuport Aviation, operators of Toronto City Airport terminal, effective 24 September 2018. As well as the new Canadian role, Pakey will maintain his non-executive Chairman position with RABA, which represents the 40 smaller regional and business airports of the UK. Along with being the Chair of RABA, Pakey has previously been CEO of Peel Airports Group, plus the MD of Liverpool John Lennon Airport, during which he also oversaw the opening of Doncaster Sheffield Airport. After this, Pakey, no stranger to Canada, moved to Vancouver Airport Services before joining Shannon Airport Group as CEO.

“Neil is an accomplished leader with deep relationships in the aviation and aerospace industry, and we are delighted to welcome him to Nieuport Aviation and the award-winning Billy Bishop Airport,” said Gregory Smith, President and CEO of InstarAGF and Executive Chairman of Nieuport Aviation’s Board of Directors. “Our terminal is critical transportation infrastructure for the city of Toronto and surrounding area and an important driver of regional economic growth. With Neil’s leadership, we look forward to further developing innovative infrastructure and contributing to Toronto’s success as an international gateway.”

Before taking on his new role, Pakey caught up with anna.aero’s Jonathan Ford to discuss what he hopes to achieve.

anna.aero: “You are recognised for growing Liverpool from one million to 5.5 million and Shannon Airport by 28%. What are the key targets that you will bring to this role?”

Neil Pakey: “I have been very fortunate to have worked with some great teams in the past and I have now met the Nieuport team and believe that together, we can make the positive difference our shareholder’s now expect. I think my experience in leadership and management of regional airports will be important, helping Nieuport to develop and make the most of their potential. Stakeholder engagement is always vital for airports, and I see that to develop shareholder value, and even stronger economic benefits to the city and region, we need to be building on our existing relationships with our partners, Ports Toronto, as well as our local community, the city authorities, the Toronto businesses and with our airline customers. Most importantly, I recognise it is about being able to develop the airport in an appropriate and sustainable way, especially given its unique location.”

aa: “Toronto City is an airport that has limited growth opportunities given the current restrictions on using larger aircraft. What will be your strategy for the airport’s network development?”

NP: “Toronto is often envied by other cities for having a downtown city airport that delivers huge economic benefit for the community it serves, and Nieuport’s partners Ports Toronto, Porter Airlines and Air Canada should be commended for the successes to date. The airport is a modern, state-of-the-art facility and we now have many opportunities on our horizon, including constructing a new US Customs Pre-Clearance facility, opening up further US markets, and in-turn creating potential interest for new carriers. I am excited to build on, and implement, these plans in a sustainable way, further growing the economic benefit of the airport, helping optimise the efficiency of operations for carriers serving and delivering our existing network, plus growing our position as a downtown airport serving the city of Toronto.”

aa: “What experience from helping establish regional airports in the UK and Ireland will benefit your new role at Toronto City?”

NP: “When cities have access to a regional downtown airport, it clearly benefits the city’s economy, and this is evident with the current airport generating CAD$2 billion (US$1.5bn) to the community annually. When you look at other examples of city airports, with London and Belfast coming to mind, they serve a great purpose and this is something that can be enhanced at Toronto City, especially for the businesses situated only a 20-minute walk away in the heart of the city.”