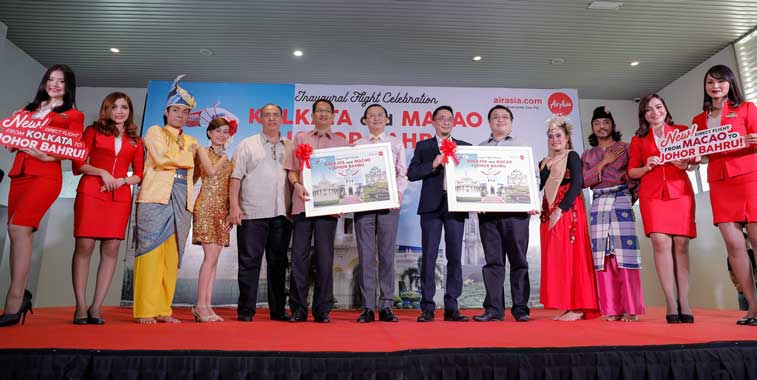 Kolkata Airport handled 19.89 million passengers during the financial year 2017/18, making it the fifth busiest airport in India. International traffic has increased from 1.00 million passengers in FY08/09 to 2.59 million in FY17/18. AirAsia added a new international link when it introduced services from Johor Bahru last November.

Kolkata is the capital of West Bengal and is situated relatively close to India’s border with Bangladesh. The city’s airport was the fifth busiest in India in terms of passenger numbers during FY17/18, behind Delhi, Mumbai, Bengaluru and Chennai, but ahead of Hyderabad. However, it was the fourth largest for domestic traffic, flying more internal travellers than Chennai. We take a look at Kolkata’s traffic over the past 10 years, plus its leading airlines, destinations and trends for a typical week in S18 (in this case the week commencing 11 September). These results are compared to the equivalent period last summer.

Kolkata welcomed 6.99 million passengers in FY08/09. The past 10 years have witnessed traffic grow by 185%, with 19.89 million travellers passing through the facility in FY17/18. The airport has doubled its passenger numbers since FY10/11, although it hasn’t all been plain sailing. Over the past 10 years there have been two year-on-year declines in traffic. These took place in FY12/13 and FY13/14, which saw passenger numbers drop by a marginal 2.0% between FY11/12 and FY13/14. Since then, growth has been accelerating, with traffic up by 97% between FY13/14 and FY17/18. Over the past two financial years the airport’s average growth rate is 25%. If this continues, Kolkata could expect to handle up to 24.87 million passengers during FY18/19. 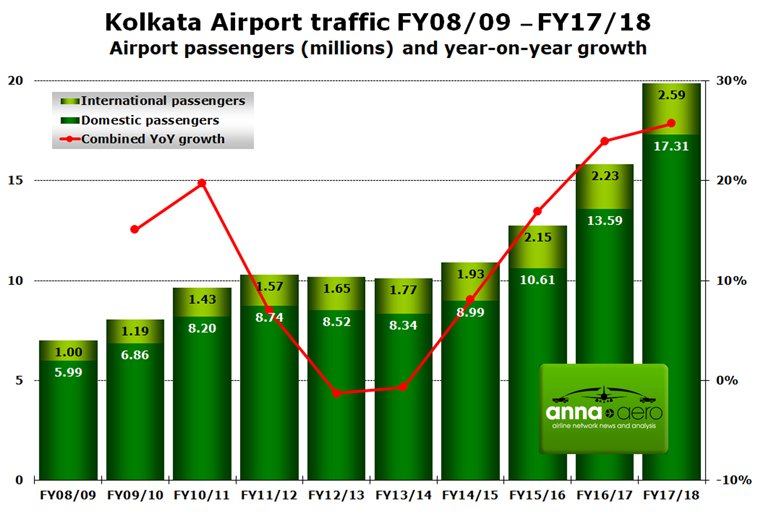 Domestic services account for the majority of traffic at Kolkata and have witnessed stronger percentage growth than international routes in recent years. There were 5.99 million domestic passengers in FY08/09 and this rose by 189% to 17.31 million in FY17/18. Meanwhile, international traffic increased from 1.00 million travellers in FY08/09 to 2.59 million in FY17/18, equivalent to a growth rate of 158%. The share of Kolkata’s total traffic taking domestic flights subsequently increased from 86% in FY08/09 to 87% in FY17/18.

OAG data indicates that 26 different airlines will offer scheduled flights from Kolkata during the week commencing 11 September. The seven biggest carriers, based on weekly two-way seats capacity, are all Indian-registered operators, with the remainder of the top 12 made up of two airlines from Bangladesh, and one each from the UAE, Thailand and Bhutan. Four of the top six are LCCs. IndiGo is by far the largest airline at Kolkata, accounting for 48% of the airport’s weekly capacity. The LCC, which is also the biggest airline in India, serves 31 destinations from the West Bengal airport in S18, including 28 domestic connections and three international links. It offers more than 250,000 weekly seats to and from Kolkata, across 208 flights. The carrier’s largest routes are the domestic connections to Delhi and Bengaluru. The largest non-native airline serving Kolkata this summer is Emirates. The Middle East Big three (MEB3) operator flies to its Dubai hub 11 times per week. 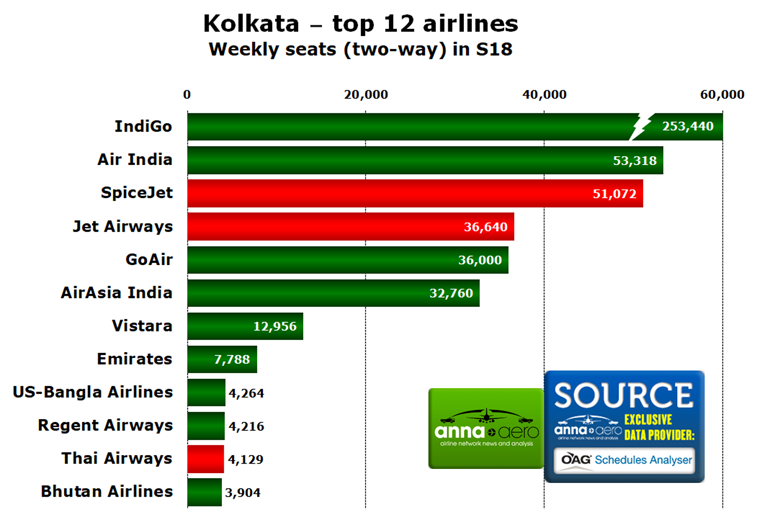 Most of the top 12 airlines increased their Kolkata capacity for S18. Three of the four strongest growing carriers are LCCs: AirAsia India (86% increase in seats), GoAir (59%) and IndiGo (28%). The fourth was Bangladeshi operator US-Bangla Airlines (50%). AirAsia’s Indian arm has doubled its destinations from Kolkata since S17, adding six new routes but dropping one. Three of the top-ranked airlines reduced their capacity on offer from Kolkata (highlighted in red). The biggest cuts came from Jet Airways which has reduced its weekly Kolkata seat numbers by 43% since S17. This also takes into account capacity operated under the JetKonnect code last year. Jet Airways has removed seven routes from Kolkata since S17, although it has also introduced new services to Indore and Chandigarh. There were no new carriers serving the airport this summer.

Schedules show that 46 different direct destinations will be on offer from Kolkata during a typical week in S18. These consist of 31 domestic links and 15 international connections. The predominance of domestic services is reinforced by the fact that 11 of the airport’s biggest 12 routes are internal Indian services, including the top eight. The biggest single destination, based on weekly departing capacity, is Delhi. Seven carriers provide 208 combined weekly departures on this route, with IndiGo offering the highest frequency at 75 weekly rotations. There are nearly 38,000 one-way seats available to Delhi, which represents 14% of Kolkata’s total weekly capacity. The biggest international route is to Dhaka in Bangladesh, which is served by eight carriers, offering a combined 71 departures during the week commencing 11 September. After Dhaka, the largest international routes from Kolkata are Bangkok Suvarnabhumi, Dubai and Singapore. 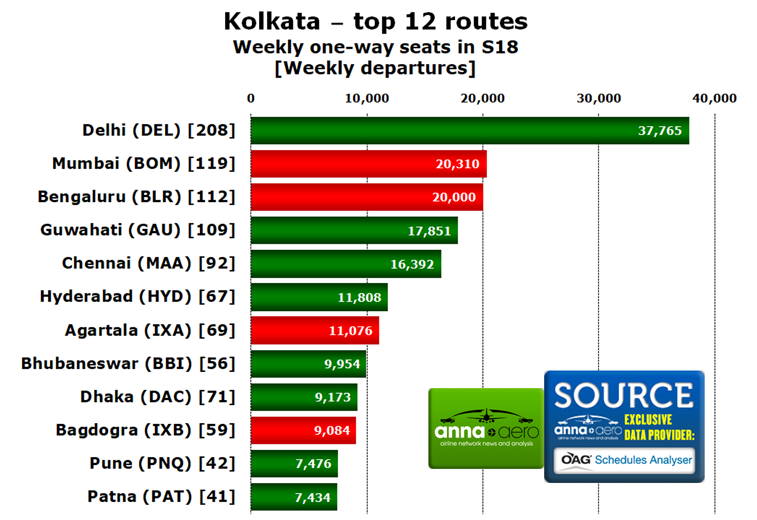 Eight of Kolkata’s top-ranked routes enjoyed an increase in weekly capacity this year, compared to the equivalent period in S17. The strongest growth has come on links to Hyderabad (50% increase in departing seats), Patna (46%) and Chennai (43%). An increase in frequencies by IndiGo was a major factor for the growth on all three routes. Four of the top 12 destinations have experienced cuts in weekly capacity (highlighted in red). The largest reduction came on flights to Bagdogra where one-way seat numbers were down by 6.9%. Three new destinations have been added to the Kolkata departures boards since S17: Indore, Chandigarh and Jorhat. Two have not returned for this summer, with no flights available to Coimbatore and Gorakhpur.

Kolkata will offer direct scheduled flights to 13 different country markets during the week commencing 11 September. This includes the domestic Indian market which accounts for 87% of the airport’s weekly departing seats. Of the 12 international markets served, all but two are located in the Asia Pacific region, and those are both in the Middle East. The biggest international market is Bangladesh. Eight airlines offer 86 combined weekly flights from Kolkata to India’s near neighbour, with services available to Chittagong, as well as Dhaka. Services to Bangladesh account for one-third of the weekly departing seats available on foreign flights. The largest international market outside of Asia Pacific is the UAE, with MEB3 carriers Emirates and Etihad Airways both linking Kolkata to their home hubs. The only country market that doesn’t make the top 12 is Sri Lanka, which is served with twice-weekly flights to Colombo with SriLankan Airlines. 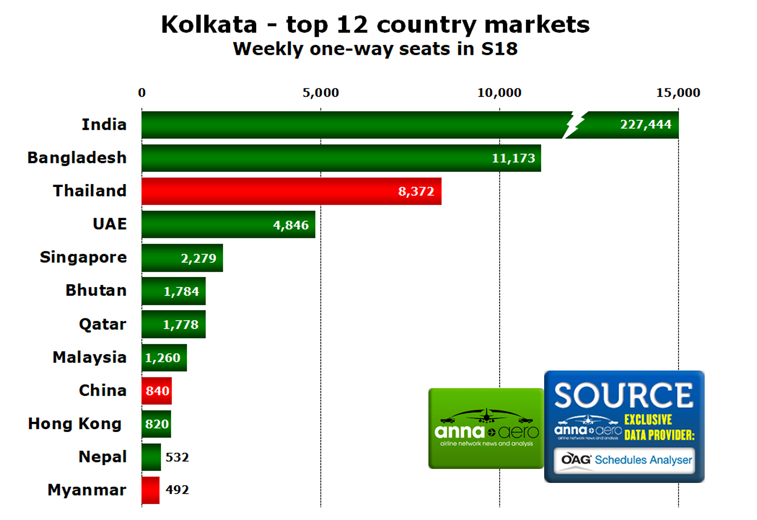 Most of Kolkata’s top 12 country markets have seen an increase in weekly capacity this summer. The biggest gain came on flights to Bangladesh with seat numbers up by 36%. This is due to an increase in capacity from Regent Airways and US-Bangla Airlines, plus the introduction of flights to Dhaka by IndiGo. Three countries experienced a cut in seat numbers (highlighted in red). The biggest drop came on  services to Myanmar and China, with weekly departing seats down by 21% and 20% respectively.

According to anna.aero’s New Routes Database, airlines have already launched 10 new services from Kolkata in 2018, with another due to get underway on 15 September, when IndiGo begins flights to Singapore. Of the 11 services scheduled to commence in 2018, seven are to be operated by IndiGo, while  nine are domestic links. 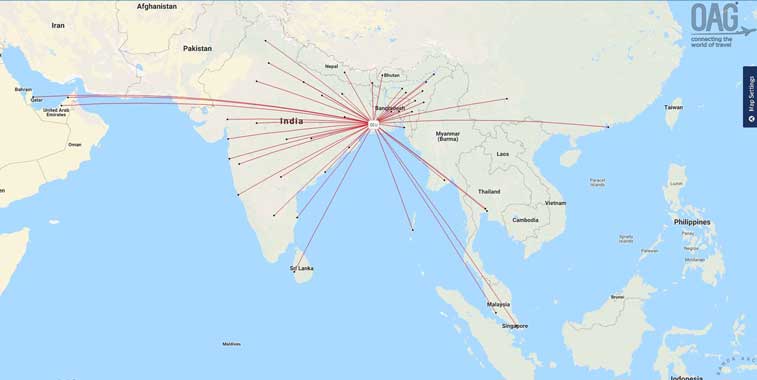 Kolkata is well connected domestically, with 87% of the airport’s passengers flying on internal services during FY17/18. Most of its international destinations are located within the Asia Pacific region. The only direct connections outside of Asia Pacific are to the Middle East, with Emirates, Etihad Airways and Qatar Airways all offering scheduled services to their home hubs in Dubai, Abu Dhabi and Doha.