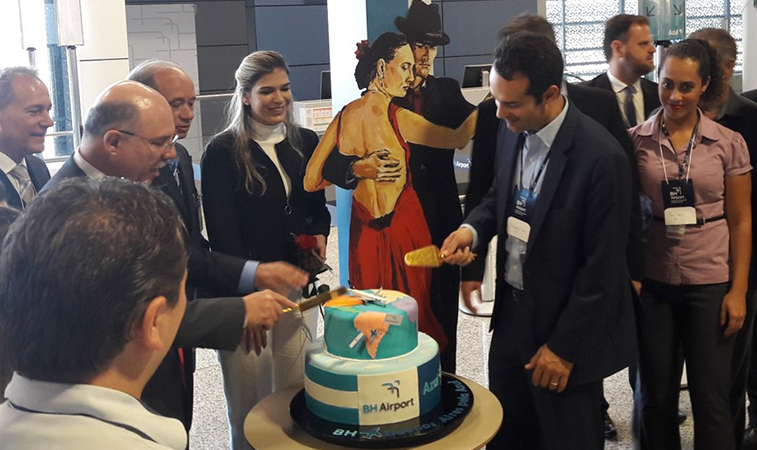 Azul Airlines welcomed 21.48 million passengers on its flights in 2017, a 7.9% increase on the previous year. Its biggest international route, based on available weekly capacity, is the intra-South American link from Belo Horizonte to Buenos Aires Ezeiza, which launched in March 2017. Helping conduct the cake cutting at the launch ceremony were Paulo Rangel, CEO of Belo Horizonte Airport and Antonoaldo Neves, CEO of Azul Airlines.

Azul Airlines was formed in 2008 and began operations in the December of that year. It was the third largest Brazilian airline in terms of passengers carried last year, behind LATAM Airlines and GOL. Azul welcomed 21.48 million passengers across its network in 2017, a 7.9% increase compared to the previous 2016. According to data from Flightradar24, the carrier currently operates a fleet of 128 aircraft, consisting of: 39 ATR 72-600s, nine E190s, 55 E195s, 18 A320s (including 17 A320neos) and seven A330-200s. We take a look at Azul’s network trends since it launched operations, and summarise its leading airports and destinations for a typical week in S18 (in this case the week commencing 11 September). These results are compared to the equivalent period last summer.

RPKs more than double since 2012

Since only limited historical passenger figures were available, we decided to highlight how Azul’s revenue passenger kilometres (RPKs) have developed since it commenced flying. The airline’s first full year of operations was in 2009, when it generated 2.09 billion RPKs, all on domestic services. From 2009 to 2017 its RPKs grew by 894%, with 20.76 billion being generated last year. During this period there was only one year-on-year decline in RPKs, which took place in 2016. From 2010 to 2012, year-on-year RPK growth rates declined from 103% in 2010 to 26% in 2012, probably due to the increase in the relative size of carrier’s network over this period. RPKs received a boost in 2013 and 2014 as a result of the merger between Azul and TRIP, with the latter’s operation being gradually absorbed under the former’s AD code during this period. According to RPK figures obtained from ANAC (Brazil’s National Civil Aviation Agency) Azul operated limited international flights in 2010, 2011 and 2013. These appear to have been small in nature and are not recorded by OAG, suggesting that they may have been some form of charters. Nevertheless, the airline has been increasing its international operations in recent years, with foreign flights accounting for 21% of all RPKs generated in 2017. 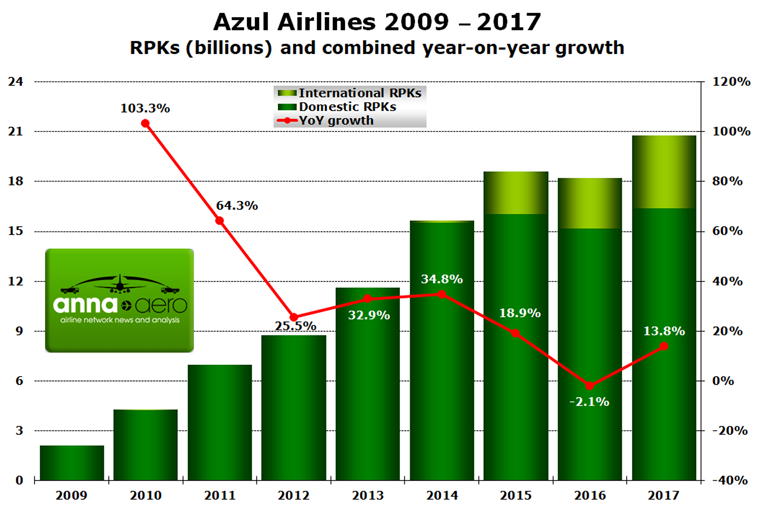 OAG data shows that Azul has grown its two-way capacity from 2.59 million seats in 2009 to 29.73 million in 2017, an increase of 1,046%. Domestic routes have always been the airline’s primary focus, with scheduled international flights not being introduced until 2014. International seats have seen stronger percentage growth over the past few years, increasing from 479,000 two-way seats in 2015 – the first full year of international operations –  to 1.49 million in 2017. This represents a growth rate of 211%, compared to just 1.2% for domestic seats over the same period. However, domestic capacity still accounted for 95% of all seats across the network in 2017. International services only represented 5% of total capacity, but had a 21% market share in terms of RPKs, owing to the longer sector lengths on foreign flights.

Azul will operate scheduled flights from 107 different airports during the week commencing 11 September. Only eight of these are outside of Brazil. Of the 99 domestic facilities served, the majority will see a minimum of two weekly flights, with only four airports witnessing a single weekly rotation. All of Azul’s top 12 airports are located in its home country market. São Paulo is the only city represented by two airports in the top 12. São Paulo Viracopos is by far and away the carrier’s biggest base accounting for 18% of its total weekly departing seats and flights. Azul will fly to 51 destinations from its home hub during the week commencing 11 September, including 48 domestic connections and three international links. Orlando is the biggest international airport in the carrier’s network based on weekly one-way seats, while Buenos Aires Ezeiza sees the most weekly foreign flights. The Floridian airport will see 3,471 seats available on 13 weekly flights from three Brazilian airports combined, while the Argentinian hub will welcome 2,442 seats across 15 flights from two Brazilian origin points The Orlando services are all flown by A330-200s, while the Ezeiza links are operated by a mix of E195s and A320s. 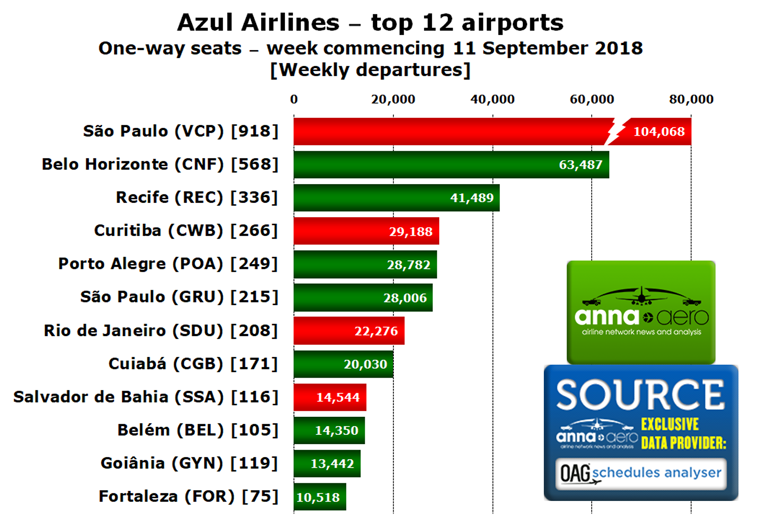 Eight of Azul’s top 12 airports have seen an increase in departing weekly capacity this summer, compared to the equivalent period in 2017. The strongest growth came at Belém, with the airline offering an extra 23  departures and 51% more seats per week. This was due to an increase in frequencies on some existing services, plus the introduction of new routes to Fortaleza, Cuiabá and Fort Lauderdale. Four of the top airports experienced cuts in weekly capacity this summer (highlighted in red). The largest decline came at Rio de Janeiro Santos Dumont, with Azul offering 23% fewer departing seats and 56 fewer flights per week in S18. Despite starting two new routes from Santos Dumont since S17, the carrier also reduced frequency across seven existing links and dropped services to Uberlandia.

The top 12 direct routes in Azul’s network are all domestic connections. Ten of these serve one of three São Paulo airports: Viracopos, Guarulhos and Congonhas. The four largest routes and seven of the top 12 serve Viracopos. The biggest individual route is the link between the airline’s biggest base and Belo Horizonte, with 9,000 one-way seats available across 71 weekly flights. Daily departures vary from seven to as many as 13, depending on the day of week, with all flights operated by E195s or A320s. The top international link, based on available capacity, is the service from Belo Horizonte to Ezeiza, which began operating in March 2017. This intra-South American route is operated by 12 weekly flights, offering 2,000 one-way seats. 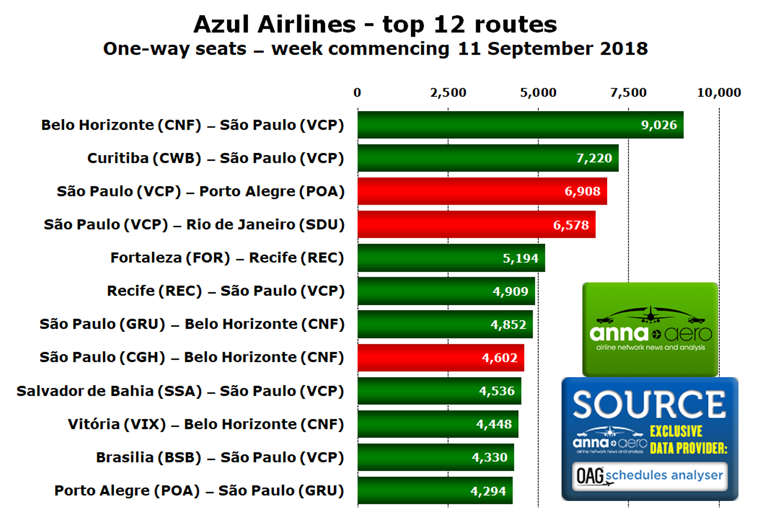 Nine of the top-ranked routes in Azul’s network enjoyed an increase in capacity for the week commencing 11 September, compared to the equivalent period in S17. Among these, the strongest percentage growth was witnessed on the Porto Alegre-Guarulhos sector, with one-way seat numbers up by 46%. This was due to the addition of eight more weekly flights and the introduction of A320s on some services, with the route having previously been operated exclusively by E195s. Three of the top 12 routes saw cuts in capacity this year (highlighted in red). The biggest decline was seen on the Viracopos-Santos Dumont sector, with the number of flights stripped back by more than 25% and one-way seat numbers down by 29%.

Azul will offer scheduled international connections from seven Brazilian airports during the week commencing 11 September, with Viracopos seeing the most available capacity on foreign flights. The airline’s biggest international market is the US, followed by Argentina. It’s longest link in terms of sector length, is the 7,921-kilometre connection from Viracopos to Lisbon, which is the carrier’s only current service to Europe. 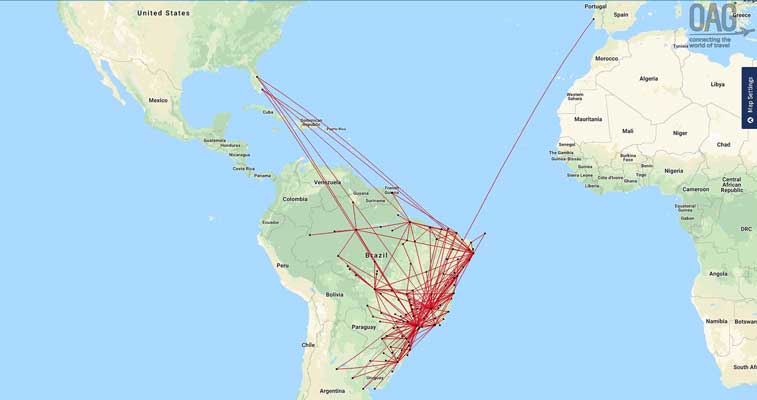 Azul Airlines’ route map for the week commencing 11 September emphasises the airline’s focus on the domestic market in Brazil. Only 5.0% of its available seats were operated on international services in 2017, although foreign flights still accounted for 21% of the carrier’s RPKs. This is due to the longer sector lengths on international routes. The longest single sector in the network is the 7,921-kilometre connection from São Paulo Viracopos to Lisbon, which is currently its only direct scheduled service to Europe.