Cork-Brussels is “Skyscanner Unserved Route of the Week” with 20,000 searches; Brussels Airlines’ only Irish service…to be sure?? 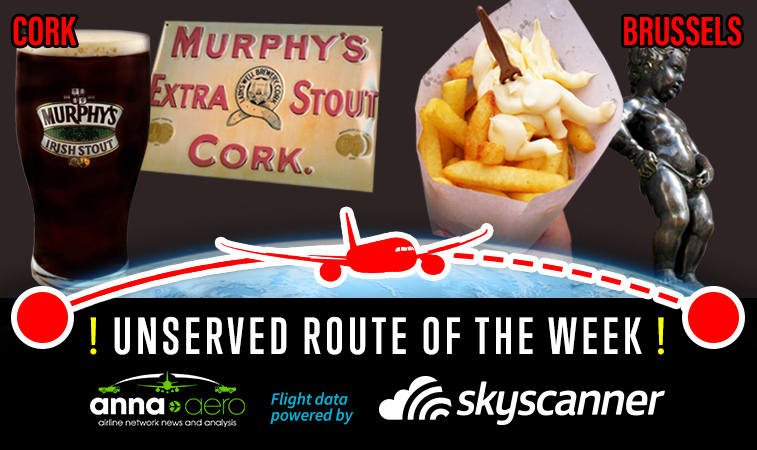 The home of Murphy’s (Cork) is eager to establish links to the home of Mannekin Pis chips (Brussels), the after-pub favourite (after several pints of Murphy’s preferably). According to Skyscanner data, there are nearly 20,000 would-be gastronomic explorers ready to experience these unique taste sensations, with Brussels Airlines looking to ‘mussel’ in (another Belgian food favourite served with chips) on a market dominated by Aer Lingus and Ryanair.

With nearly 20,000 searches in the last year, a potential city pair from Cork to Brussels has been identified as this week’s “Skyscanner-anna.aero Unserved Route of the Week” – a powerful analysis based on aspirational data captured from the Skyscanner.net flight comparison site used by +70 million unique visitors per month. “One of the strongest advocates for the restoration of a Cork-Brussels link and the most vocal has been Irish Member of the European Parliament, Deirdre Clune,” says Daragh Hanratty, Head of Aviation Marketing, Cork Airport. “She is the only Irish member of the European Parliament’s Committee on Transport and Tourism, so she is ideally placed to appreciate the importance of air connectivity for both business and leisure passengers right to the heart of Europe.” 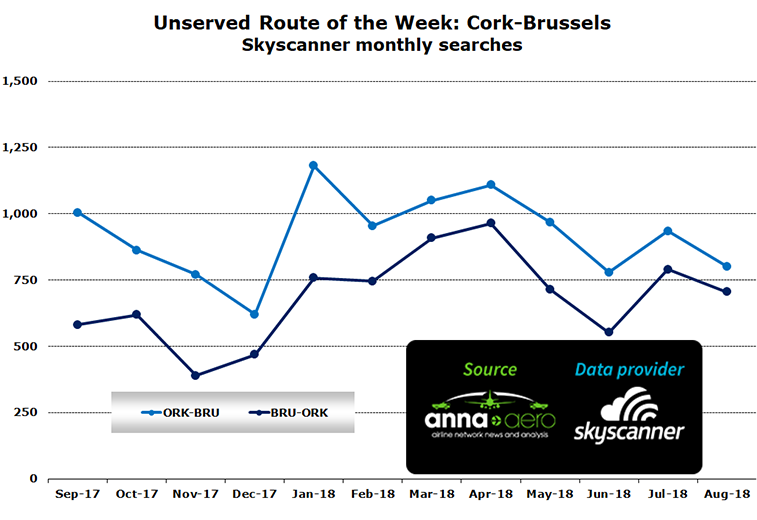 Skyscanner demand on this week’s unserved route shows a slight preference towards the Irish end of the city pair, with a 57/43 split, so on this basis we looked at potential carriers at the Cork origin first. According to OAG schedules for the week commencing 11 September, the largest carrier at the Ireland’s second biggest airport is Aer Lingus (56% share of weekly seats). The airline’s route network from the airport, its third largest operation after Dublin and London Heathrow, presently consists of 35 destinations, of which three are high-frequency services to some of Europe’s major hubs, namely Heathrow (31 weekly services), Paris CDG (14) and Amsterdam (10). The carrier currently only flies to the Belgian capital city from its Dublin (12 weekly services) base, but at least this means it is no stranger to the Brussels market. Hanratty has his own insight into Aer Lingus’ reluctance to re-consider the city pair (it had previously flown the route) – it might have an impact on the airline’s Dublin service to Brussels: “We know that nearly 66,000 passengers leaked from Cork’s catchment area to Dublin [Source: Cork Airport research].”

Ryanair is the second-largest carrier (38% share of weekly seats) at the Irish airport, presently offering 16 non-stop destinations. With 74% of weekly seats at Brussels Charleroi, it is also that airport’s biggest serving airline. Returning to Cork, and despite a handful of services to Italy, Poland and the UK, the majority of the ULCC’s network from the airport are to leisure destinations in France, Portugal and Spain. Like its domestic nemesis Aer Lingus, Ryanair does offer 20 weekly flights from Dublin to the Belgian city, split between Brussels (16 times weekly) and Brussels Charleroi (four). So it would seem a similar situation exists for the ULCC as it did for Aer Lingus when contemplating a new service to Brussels from Cork – how will it impact my existing Dublin services? The answer to that is simple – take the market before the competition does! “Both airlines are expanding their respective offers at Cork, [Aer Lingus to Lisbon; Ryanair to London Luton, Malta and Poznan], we hope that Brussels could be next,” suggests Hanratty.

Considering the Belgian end of the route, Brussels’ leading capacity provider of its current 63 serving airlines is, unsurprisingly, Brussels Airlines, which offers 40% of the airport’s weekly seats. The carrier does not presently have any routes into Ireland, making it an ideal candidate to evaluate a Cork service, as it will not cannibalise any of its own existing capacity. With the opportunity to provide feed traffic on the majority of Brussels Airlines’ 106-destination network from its biggest hub, there is more than just point-to-point passengers to be had by the carrier. On this basis, and with this compelling Skyscanner data now in evidence, there appears to be no barriers in the way to obstruct Brussels Airlines from starting to seriously consider its first only Irish route.

When looking at the previous year of search data (graph above), the busiest month (from Cork) is January 2018, with nearly 1,200 searches. On this basis the anticipated booking profile of the route has been allocated as short-haul leisure, resulting in around 62% of travellers on this potential sector wanting to book between seven to four months before departure. This would seem to indicate that the busiest months for traffic from Ireland will be between May and August. Using the same methodology for the Belgian end of the sector, the peak months for traffic will be between July and October.

According to OAG Traffic Analyser, because there is no direct service, the top three connecting options chosen by those passengers who did book travel between Cork and Brussels in the last 12 months (year ending June 2018) indicates that the majority of connecting travellers used Heathrow (80%), Zurich (10%) and Birmingham (4%). Looking at traffic flows in the opposite direction, Heathrow (81%) and Zurich (13%) were again the top two options for Belgium-originating passengers, with Amsterdam (3%) taking third spot in this direction. “In 2017, over 3,000 passengers flew indirectly from Cork to Brussels [Source: AirportIS],” adds Hanratty. 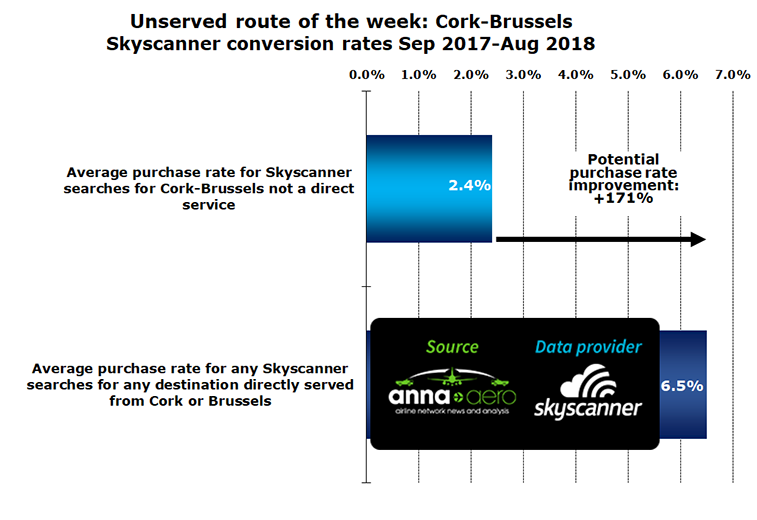 Indeed, an O&D market that is not served by a non-stop flight will typically display a low purchase rate and low traffic. In this instance Skyscanner’s Travel Insight indicates a monthly average purchase rate of 2.4% for the Cork to Brussels route (see graph above). Therefore, if there was a Cork to Brussels route, and if bookings performed in line with the “Skyscanner market average” for direct services at both airports (6.5%), the airline operating this route could immediately expect an improved purchase rate of a significant 171%, without any increased marketing spend. However, with around 20,000 annual searches in the last year, and with the sector being operated by an appropriately-sized aircraft for the type of route, a six or seven times weekly service should be immediately viable for the airline choosing to start this potential city pair. Given that both Ryanair and Aer Lingus are expanding at Cork, which one will win the race to service Brussels first? Or might we get a dark horse to beat both of them to it? Whatever happens this opportunity is ripe for the picking.