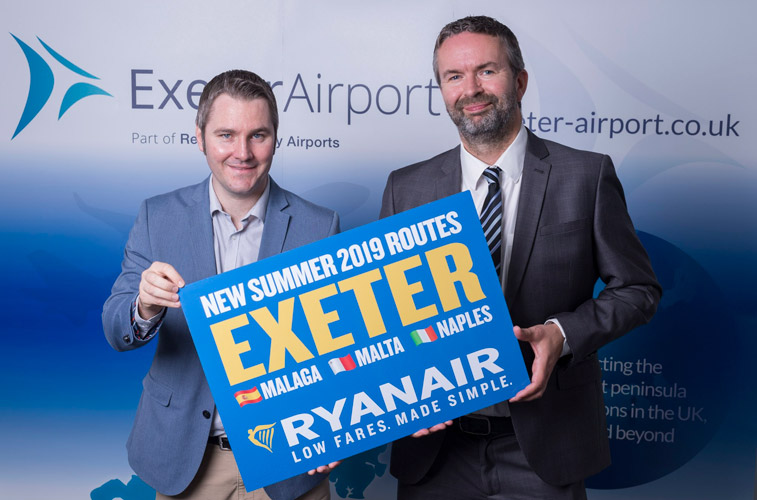 Ryanair announced on 11 September that from S19 it will add Exeter to its network, with the airport becoming the ULCC’s 21st destination in the UK. Flights to Malta will commence on 2 April, with Malaga and Naples services commencing the following day, with all three routes scheduled to be flown twice-weekly, adding 1,134 weekly seats from Exeter in S19. Pictured at the announcement were Robin Kiely, Head of Communications, Ryanair and Matt Roach, MD, Exeter Airport. “This is a significant vote of confidence in the continued growth of Exeter Airport and we are delighted to be welcoming Ryanair for the very first time. These routes are popular destinations and offer customers even more choice and greater connectivity from their local airport,” commented Roach. Both Malta and Naples are new routes, while Flybe already serves Malaga from the UK airport. This news follows on from the latter carrier’s stationing of an additional aircraft in Exeter next year. 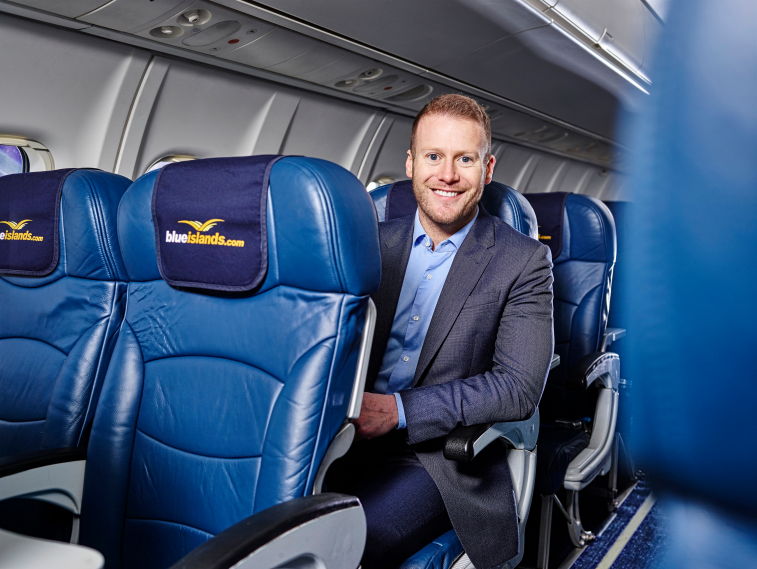 Blue Islands this summer experienced record passenger numbers, with 37,788 guests carried in August. According to a Blue Islands press release, this is the largest number of customers it has ever served in a single month, and represents a year-on-year increase of 8% from August 2017. In total, the Guernsey-based regional carrier transported 107,298 passengers in the summer months of June, July and August, up 3% on 2017. Blue Islands CEO Rob Veron (pictured), explained the figures: “We are pleased with the strong passenger numbers this summer. Blue Islands has sustainably grown its fleet capacity, investing in the larger 68-seat ATR 72 aircraft. From Jersey, London City was particularly strong with customers taking advantage of the airport’s unrivalled location in the heart of London. Thanks to being able to just make one booking and with the high frequency of Blue Islands operated flights from Guernsey and Jersey to Southampton, passengers are also increasingly using Southampton Airport when flying to destinations across the UK and Europe with easy connections to flights operated by Blue Islands’ franchise partner Flybe.” 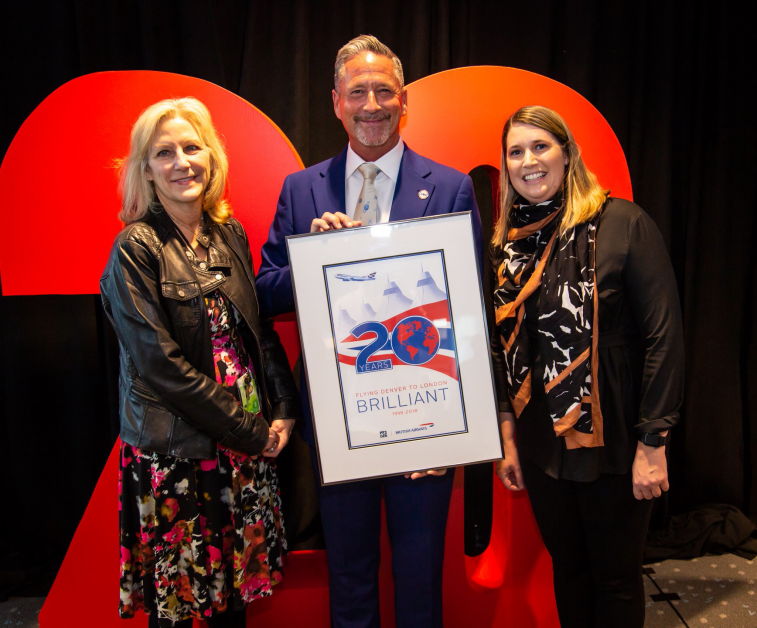 On 6 September British Airways and Denver Airport celebrated 20 years of non-stop services between Denver and London. Denver Airport CEO Kim Day, British Airways VP Alan Eley and UK Consul Erin Kuhn, were present at the event, which included this striking poster artwork and themed cakes for passengers on the anniversary flight. According to OAG Schedules Analyser data, between 2011 and 2017 BA was the sole operator on the route, with United Airlines restarting services after an eight-year hiatus in Q1 2018. Both carriers operate a daily service on the city pair, with BA using its fleet of 335-seat 747-400s on the sector, while the Star Alliance member utilises its 219-seat 787-8s. 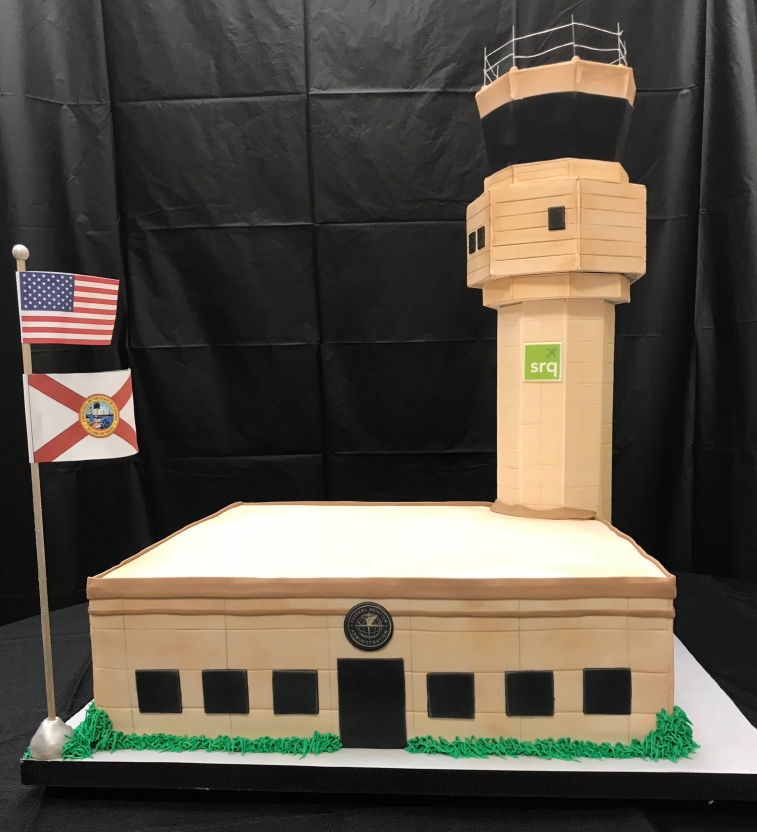 The FAA, Sarasota Airport and the Florida Department of Transportation (FDOT) dedicated the new air traffic control tower at Sarasota Airport on 10 September. The FAA invested $7.2 million (€6.22 million) on the tower’s design, engineering and electronic equipment, which the agency installed and will maintain. The airport funded $8.9 million (€7.68 million) for construction and it will own and maintain the building. FDOT also contributed $8.7 million (€7.51 million) for the tower’s construction. At the ceremony, where this fantastic cake was on display, Michael O’Harra, Regional Administrator, FAA Southern Region stated: “The FAA is proud to celebrate the new tower and our partnership with Sarasota Airport and FDOT. The facility will provide our controllers with greater visibility of the airfield and our investment in technology will enhance their ability to provide safe and efficient air traffic services for the Sarasota community.” 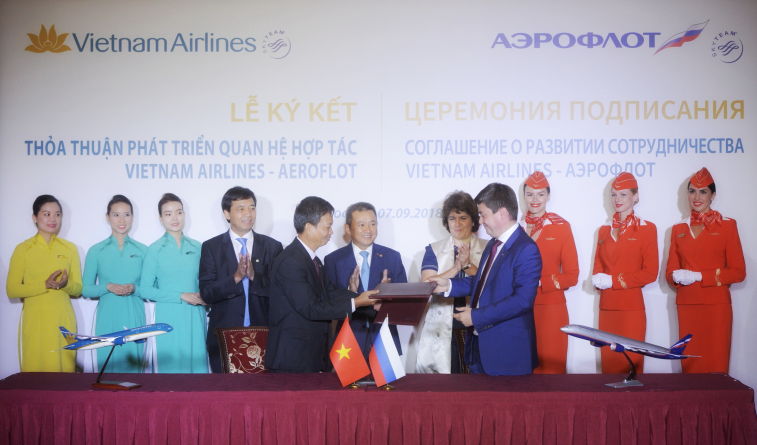 On 7 September Vietnam Airlines and Aeroflot signed a Memorandum of Understanding (MoU) to strengthen cooperation between the two airlines. Trinh Ngoc Thanh. EVP of Vietnam Airlines and Andrey Chikhanchin, Deputy CEO of Aeroflot signed and handed over the MoU between the two companies. From 2019, the two airlines will begin code-sharing on domestic routes in Vietnam and Russia, plus they will expand their cooperation across several areas of the business. According to a joint press release, this agreement will further expand travel opportunities between Russia and Vietnam, as well as increasing passenger volumes and economic trade activities between the two countries. Thanh said of the venture: “The agreement signed today marks 25 years of Vietnam Airlines’ services to Russia. The MoU takes our cooperation further in the direction of a solid and mutually beneficial partnership, offering customers a wider choice of travel options and world-class quality of two leading four-star airlines.” Vietnam Airlines offers three direct flights per week between Hanoi and Moscow Domodedovo, operated by 787-9s. Aeroflot operates nine weekly flights on routes between Moscow Sheremetyevo and Vietnam (Hanoi served daily) and Ho Chi Minh City (twice-weekly) according to the joint statement between the two carriers.