Zambia market returns to growth in 2018; capacity up by 4.2% this year, South African Airways is leading carrier 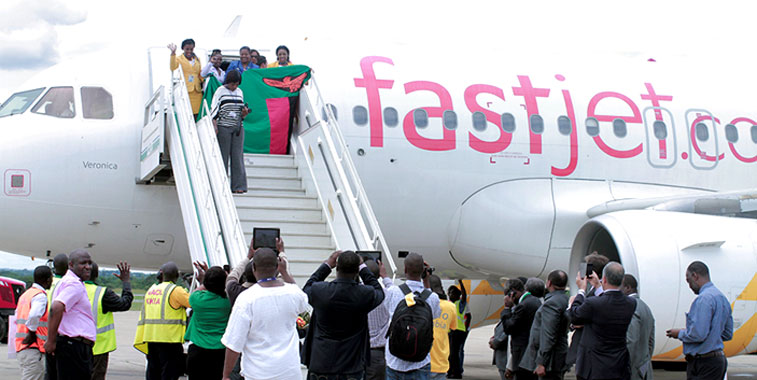 fastjet introduced services to Lusaka in Zambia from Dar es Salaam in Tanzania in February 2014. The intra-African connection was dropped in early 2015, before being re-instated late last year. During the week commencing 11 September the carrier will serve the airport pair with one flight operated by an E190.

Zambia is located in central southern Africa and boasts Victoria Falls among its main tourist attractions. The United Nations, Department of Economic and Social Affairs, Population Division (2017), World Population Prospects document, estimates that the country had a population of around 13.46 million people in 2009. The median variant estimate for 2018 is that Zambia will have about 17.61 million inhabitants, that’s a population increase of 31% in the space of 10 years. The African nation’s air services have also been on the up over this period.

There were 1.44 million two-way seats available on flights serving Zambia in 2009. By 2018 this had increased to 2.56 million seats, representing a 77% expansion in capacity over this period. From 2009 to 2013 the market enjoyed four straight years of back-to-back growth, before seat numbers were stripped back by 4.9% in 2014. There then followed two more years of growth in 2015 and 2016, before another marginal reduction in capacity in 2017. The Zambian market has rebounded again in 2018, with capacity up by 4.2% based on the schedules filed to date. The average year-on-year growth rate between 2009 and 2018 was 4.2%. The biggest single annual increase was the 19% growth spurt witnessed in 2010. 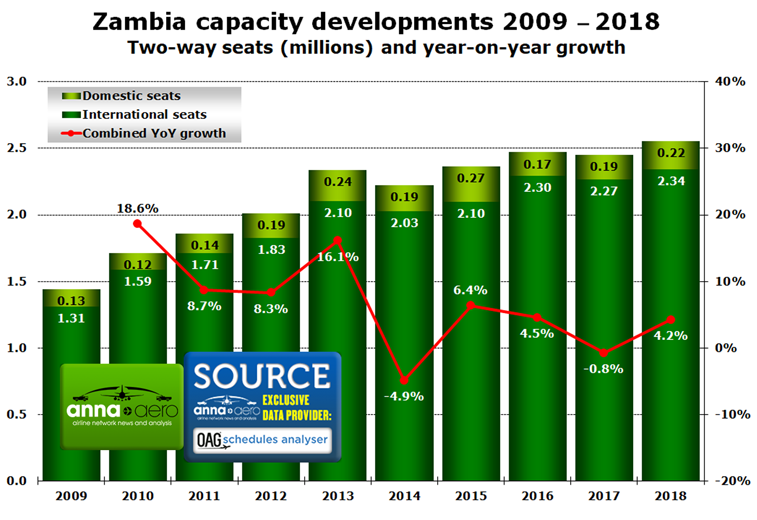 International seats continue to account for the majority of Zambia’s available capacity. There were 1.31 million two-way seats on foreign flights in 2009 and this has increased by 53% to 2.34 million in 2018. In comparison, there were 132,000 seats on domestic services in 2009 and this has grown by 63% to 215,000 in 2018. The proportion of all Zambian capacity operated on international connections has risen from 85% to 92% over the same period.

According to OAG data, 12 airlines will offer scheduled flights in the Zambian market during S18. Most of these are foreign-registered carriers, with the only native operator being Proflight Zambia. The other 11 airlines include nine from Africa and one from the UAE. British Airways appears in the top 12, but the carrier does not operate to the UK from Zambia. This capacity is provided under the BA brand by its South African franchisee Comair, which operates direct services between Livingstone and Johannesburg. The biggest carrier in the Zambian market in S18 is South African Airways, which provides 22% of the country’s available seats this summer. SA Airlink operates four airport pairs between Zambia and its home market including connections to Johannesburg from Lusaka, Livingstone and Ndola. The largest non-African operator to serve Zambia is Emirates.

This analysis only looks at direct routes. Multi-stop itineraries are quite common in Africa and there are examples where Zambian airports form just one point in this type of operation. Emirates, for example connects Dubai to Lusaka with a daily service that then continues on to Harare in Zimbabwe. It then returns to Dubai via Lusaka, and the carrier offers seats for sale between the two African cities as well as to its home hub. It should subsequently be noted that not all of the capacity stipulated in the schedules may actually be available to or from Zambia. On the Emirates service for instance, some of the seats available between Lusaka and Dubai and Lusaka and Harare will actually be taken by passengers travelling indirectly between the Middle Eastern hub and Zimbabwe’s capital. 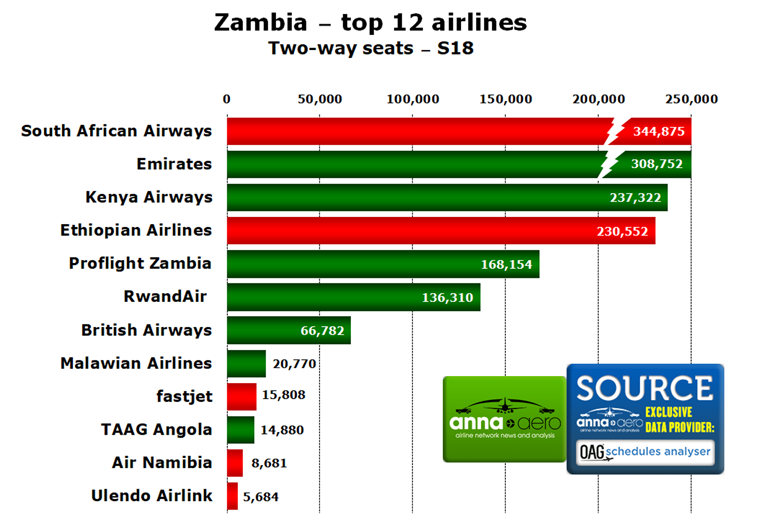 Seven of the 12 airlines serving Zambia in S18 have increased their capacity in the market since last year. The biggest percentage increase came from Malawian Airlines, but this was because it barely operated any scheduled services to Zambia in S17. Of the more established carriers, RwandAir saw the strongest increase in seats, doubling its capacity for S18. Five carriers have cut seats from the Zambian market this summer (highlighted in red). The biggest reduction came from Ulendo Airlink which offered 54% fewer seats than in S17.

Schedules show that regular flights will operate to destinations in 12 different countries from Zambian airports during S18, including the domestic market, which accounts for 17% of departing seats. The largest domestic routes are the connections from Lusaka to Ndola and Livingstone which are served by about 24,000 and 15,000 one-way seats respectively during the summer season. Lusaka is the largest airport in Zambia, accounting for 68% of the available departing seats. The next biggest by capacity are Ndola and Livingstone.

All but one the 11 international markets served from Zambia in S18 are located in Africa, including the two largest by capacity: South Africa and Zimbabwe. About 30% of all departing seats from Zambia this summer are on South African services. There are six different airport pairs linking Zambia to South Africa, with the biggest route being the connection between Lusaka and Johannesburg. The only direct connection to a non-African country market is Emirates daily service to its home hub in the UAE. 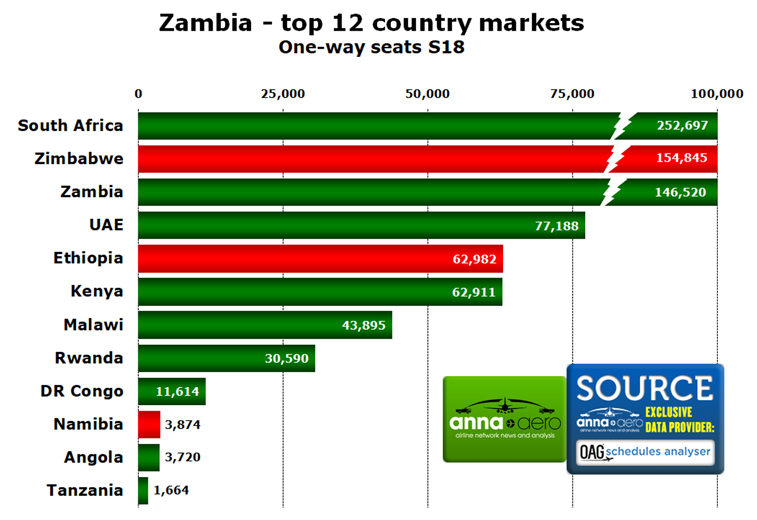 Most of the 12 country markets saw an increase in capacity this summer compared to S17. The strongest percentage growth came on services to Malawi (168% up) and Rwanda (99%). Three destination countries witnessed a decline in seats (highlighted in red). The biggest cuts were experienced on links to Ethiopia (18% down) and Namibia (17%). 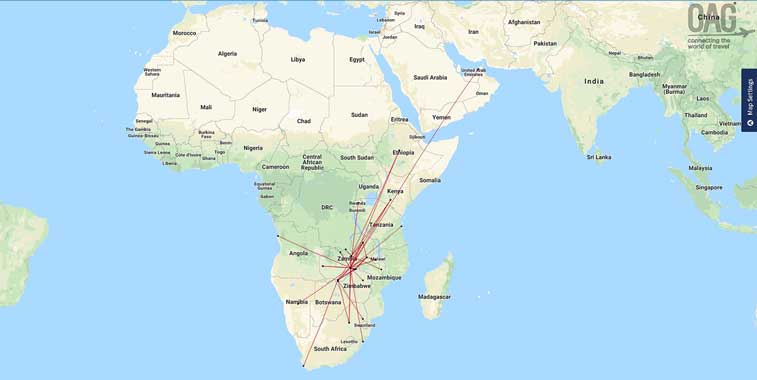 The route map for direct flights from Zambian airports in S18 shows a concentration of services within Africa. Domestic flights only accounted for 8.0% of all seats this summer. The largest international market is South Africa, while the only direct connection to destination outside of Africa is Emirates’ daily service to Dubai.